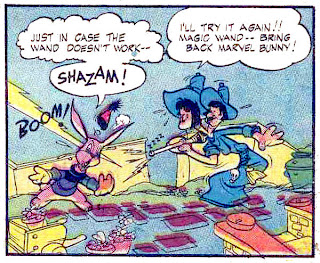 
Fawcett marketed a self-contained universe, a brand which identified the Captain Marvel characters. From Captain Marvel came Captain Marvel, Jr., Mary Marvel, Uncle Marvel, the three Lieutenants Marvel, even Hoppy the Marvel Bunny, who is also called Captain Marvel Bunny. By using the same name or slight variation the readers were assured that they were a part of a whole, an instantly recognizable franchise. Pretty smart! They could start even the youngest children off with a funny animal version of Captain Marvel and then work him up to the Big Red Cheese himself. At least I think it's how it's supposed to work from a marketing standpoint. Hoppy came along in Fawcett's Funny Animals in 1942, then graduated to his own title after the war.

Chad Grothkopf, who created Hoppy/Captain Marvel Bunny, as well as Willie the Worm, was an animator and prolific comic book/strip artist, whose work appeared from the '30s to the '80s. He died in 2005. Hoppy appeared until the demise of Fawcett's comic book line in 1953.

I like Chad's art, recognizable by sweat drops popping off every character, as well as speed lines and puffs of dust or smoke in practically every panel. Chad's drawings are charming, but as you can see from this first strip from Hoppy the Marvel Bunny #1 (1945), sometimes suffer from crappy printing jobs. After DC shut down the Captain Marvel franchise as the settlement of a long-running lawsuit, Hoppy was bought, with other non-Captain Marvel Fawcett characters, by Charlton and renamed Magic Bunny. 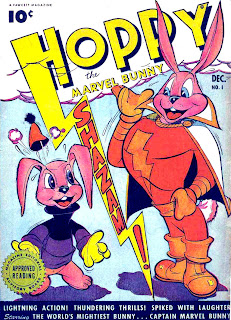 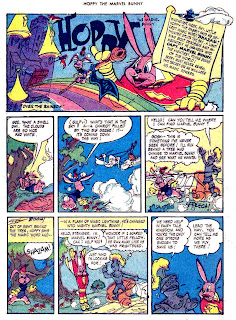 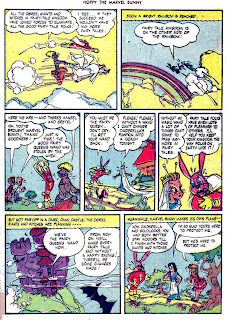 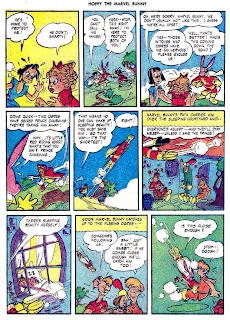 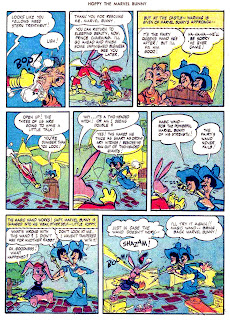 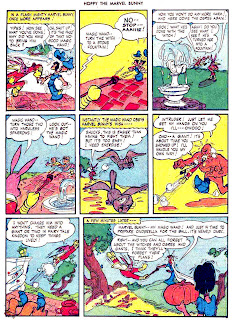 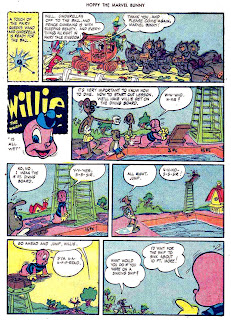 I note that, while Beck resisted showing Captain Marvel actually punching anyone (though Beck would show them having been punched), Grothkopf had no scruple against showing the Bunny doing this!

The Rudy Palais of funny animals! The animator shows in the lively action of his characters. Thanks.

Brian, hey, I love it: Rudi Palais of funny animals.

(For those who don't know, Palais was an artist who did horror, superheroes, etc., all with giant sweat drops dripping off them.)

I'm a big fan of Hoppy!!! Great to see him represented by Pappy!