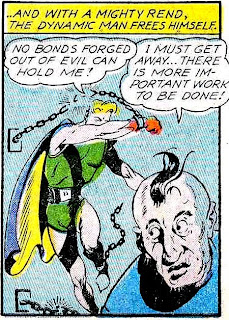 
This is the first of a theme week, the "superzeroes", or in my definition, those heroes that for whatever reason defy all logic or pretense of same. Actually, that probably describes all superheroes, but for the purposes of this theme week and for me, these are the heroes that stand out.

First up, Dynamic Man. Dynamic Man was born of an explosion, brought to life in an inexplicable way by a scientist who had somehow figured out that "witches of old" were kidnapping scientists. There was no backstory in this first story. We just have to accept that Dynamic Man came to instant life.

Dynamic Man appeared in Dynamic Comics #1, 1941, published by Harry "A" Chesler, and drawn by an unknown artist (or artists) obviously influenced by the work of Lou Fine. Despite being named after the comic, Dynamic Man wasn't the lead character. That "honor" went to Major Victory, yet another patriotic hero during those days of World War II. I haven't shown much from Chesler's comic books. I don't have many. There's really nothing new to Dynamic Man. The second panel on the first page even reminds us of a famous moment from Batman! 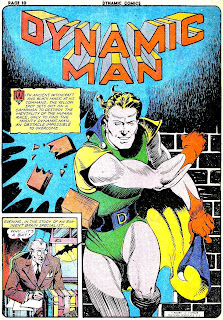 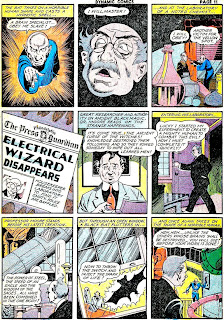 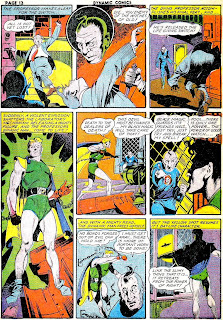 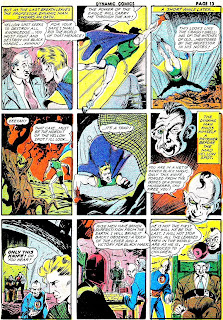 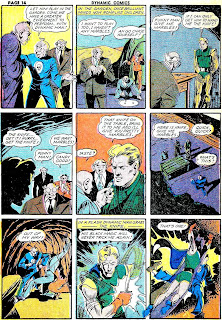 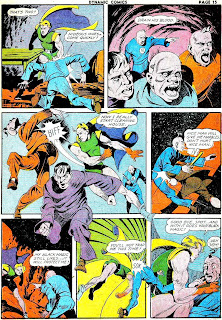 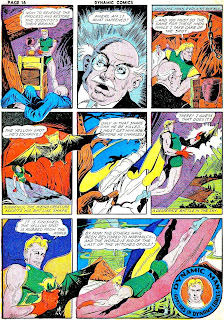 Yep. I'm ready for some neat "superzeroes", so bring 'em on!

Pappy, to go by the moon glow pallor of his protagonists, Dynamic Man's unknown artist must've learned his stuff by drawing his fellow 'students' at Sing Sing 'Art College'!

At least the artist actually seemed to care - the writer exhibits not the slightest hint of authentic affection or indeed sheer understanding of what makes comics work.

Clearly convinced all comic readers aren't just morons but beneath him as a 'proper' writer, it's almost as if on accepting the assignment (maybe out of a need to eat), the only research he did amounted to recalling the name of the character Batman and imagining he might have something to do with Bela Lugosi Dracula movies!

Borky, I don't recall all that much originality when writers/editors/artists had the template of Superman/Batman/Captain Marvel/Captain America to go on, imitating the trendsetters with characters of their own.

I agree the artist looked like he cared. The artwork is very well done, but he had Lou Fine to imitate. Even then, he had to take some time, but not so the writer who appears to have banged out the story during a morning coffee break.