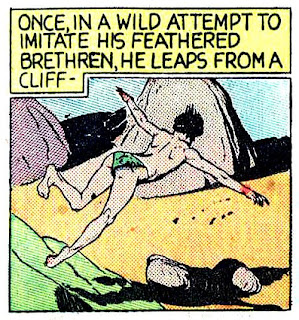 We started this week with Dynamic Man, a story drawn under the influence of artist Lou Fine.

Doing this posting seems a bit like sacrilege. When I entered comic fandom the work of Lou Fine was venerated. It was the comic book equivalent of Da Vinci or Michaelangelo. So what if some of the stories Fine drew were hopelessly dumb, like this origin story of the Black Condor from Crack Comics #1, 1940? He was LOU FINE. And he was part of the Will Eisner group of artists doing some of the very best artwork of that early era of comic books.

And I do admire the artwork, except when I read this story I'm struck by how bad this origin story is. And it's not just because it was written 70 years ago. I believe it was just as bad in 1940. Richard Grey Jr. is a foundling adopted by a Mama Condor. She feeds him. The idea of him swallowing regurgitated condor food, which is--urp! gag!--carrion (think of dead cattle, bloated and stinking). Revolting. The child grows up, but he takes a long time. Well, that's what humans do. We have a long childhood so our larger brains can develop. Dick seems determined to do what his fellow condors do, which is fly, so he uses that human brainpower to figure out air currents and such and pretty soon he's flying just like a condor.

I'm aware the Black Condor was revived, although I haven't read any of the modern stories.

What I can tell you about this origin story is a) the art by Lou Fine is very fine; b) the story is attributed to Will Eisner by the GCD, and I'm sorry Eisner fans, but it is stupid. 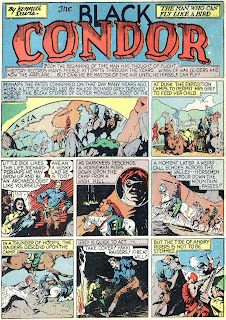 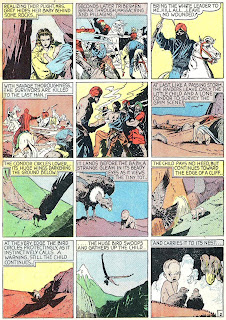 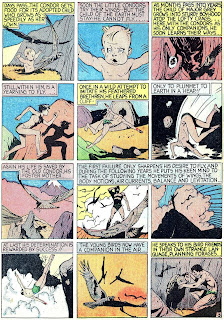 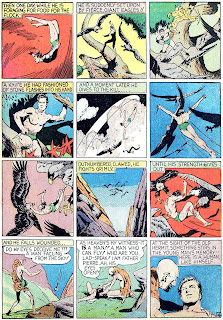 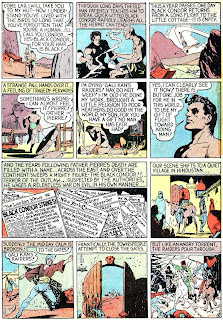 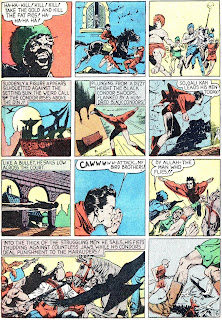 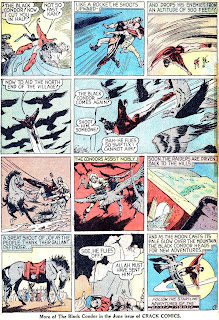 My favorite part is when the old hermit names him "Black Condor" because "his hair is black". Thank God he wasn't bald.

man, this story is bizar, some kind of flying Tarzan!
shame on Will Eisner

That is the most flapdoodle reworking of the Tarzan origin story in human history.

Mom calls sonny boy "Little Dick", but wouldn't it've been more comic-style ominous (given the fate ahead of him) if she'd've referred to him as her "little duck"?

And when she speculates about him growing up an archaeologist wouldn't it've been neater if 'Pappy''d responded, "Nah, he seems a bit too birdbrained to me"?

And speaking of "Little Dick(s)", wouldn't the little 'worm' between his legs've been in permanent peril from his 'brothers' and 'sisters' until Feathery 'Mom' somehow rigged up that loincloth for him?

But saying all that, I have to disagree with you for once, Pappy, because this story reads a bit like a Sinbad or Aladdin style Sufi fairy tale to me, (Shakespeare's The Tempest, too, maybe?).

Yes, a bit like something inspired by a crazy almost narcotic dream, but only after being subjected to a coherent sense of carefully thought out plot and character development showing its author recognised the origins of so-called mystery men lies not in the emergence of Science but to an era even earlier than Alchemy.

But even if you think that's a load of bollocks, you can't deny it reads like Nobel Prize level literature compared to Dynamic Man.

Yes, I had been interested in the Black Condor after having a panel reproduced here or there, but was astonished by the origin story. To me, it seems more a work of contempt than of stupidity, though I'm not sure whether the contempt were meant for the readers or for Eisner's more immediate customer.

Those who never read the origin story or managed to forget it could simply accept the Condor as a character who could fly for some reason. His costume seemed … uhm, questionable, but I could easily be distracted from that by Wendy Foster

I've enjoyed the comments on this story. Maybe there's a reader out there who thinks it's great, and if you do I'd like to hear from you.

We're off our week of superzeroes, now, and back to our regular fare on Sunday. I'm showing an entire early March Of Comics with Felix the Cat.

I was thinking "Tarzan ripoff" too. No wonder Fine and Eisner hid behind that "Kenneth Leurs" (?) pseudonym; I'd have to go with Daniel on the contempt thing.

rnigma, the lettering of the pen-name "Kenneth Lewis" isn't very clear, which is why you had trouble deciphering it.

Feral children have been the subject of myths, legends and fiction for centuries. Romulus and Remus, Tarzan and Kipling's Mowgli are the characters who usually come to mind.

My guess is that in the late '30s, with publishers clamoring to get into the comic book biz, a lot of ideas were put into production that even if not that good at least filled up pages. Black Condor, as silly as his origin is, went on for 31 issues in Crack Comics.

Don Markstein says in his Toonopedia entry on Black Condor: "The Condor's origin story wasn't too implausible, at least by superhero standards." I rely on Don's web site for information, but don't agree with him on that assessment.

I'm also reminded of the Disney movie "Condorman" from 1980 or so, in which Michael Crawford played a comic book artist who decided to play the part of his hero. This included unsuccessful attempts to fly....