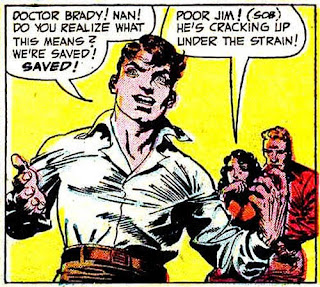 
Frank Frazetta worked on this 8-page science fiction strip from Mystery In Space #1, 1951. I believe the Fleagle Gang, Kurtzman's nickname for Frazetta, Williamson, Torres, Krenkel, etc., may have helped draw this strip.The usual Frazetta signature is missing, although there is a small colophon in the lower left corner that looks like a double-F. The early issues of Julius Schwartz-edited Strange Adventures and Mystery In Space credited writers, but not artists.

"Spores From Space" is like a reverse global warming, a new ice age is setting in. The heroes believe the spores are an alien threat and send a missile to blow up the asteroid where the aliens live.

[SPOILER] Melting all the snow and ice would create massive flooding, which isn't mentioned in the story. It's too bad the aliens weren't hostile after all, just trying to help, and the Earthmen blew them up for nothing! Ha-ha. Well, shit happens. 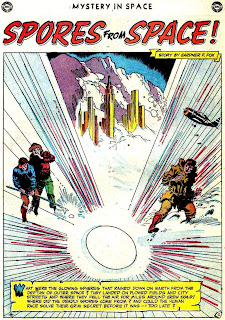 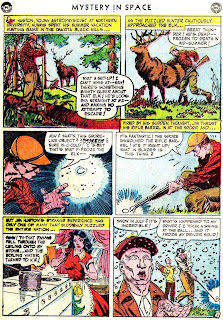 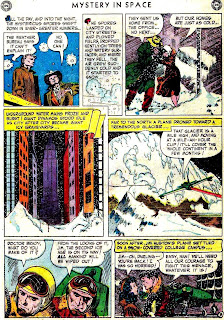 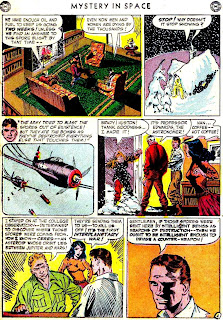 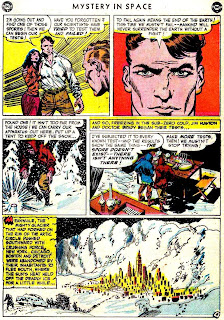 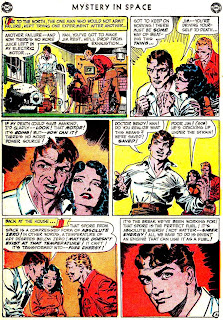 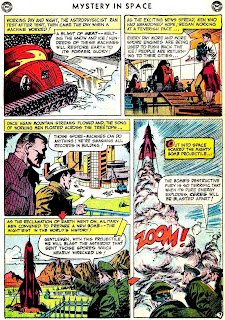 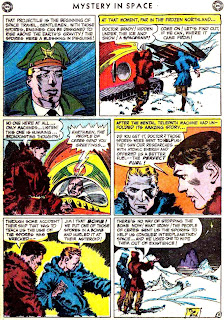 A surprising story for the time, where good intentions go completely wrong on all sides and there are no heroes. Lovely work, too. Thanks Pap.

John, it does seem to run counter to the usual Schwartz-edited fare, or even DC in general: happy endings with positive resolutions.

Is it me or do the layouts of the first three pages have a sort of Murphy Anderson feel to them?

...and now I've actually read the thing I'm left with the feeling of deja vous, as if I've read exactly this same story somewhere else but drawn by another artist from a later period.

Great! Very cool! Er, no pun intended...another fairly typical DC sci-fi story from that era, elevated beyond the norm by Frazetta's art. You're right, of course, that's his signature all right, disregarding if a fleagle or two lent a brush or not.

(How strangely fortuitous that this coincided with my own Frazetta posts...as a matter of fact, this story is listed and noted in the now discredited FRAZETTA TREASURY(!) as being by him, which it obviously is.)

I was just reading earlier today about how Frank said how he would enlist the help of his pals Williamson, Wood, or the like to help him complete a comic strip or story earlier than he might have, so he could go outside and enjoy the sunny day! I like his thinking!

Thanks, Pappy! Another gem from the world's greatest comic blog!

Apocolyte's blog, Black and White and Red All Over, reproduces the first Thun'da story in glorious black and white, as well as an interview done for a Frazetta fanzine several years ago.

Apocolyte, did you scan the Thun'da story from that fantastic large size reprint published by Russ Cochran?

Borky, as for déjà vu, have you ever read anything, especially any comic book story, you felt was truly original, that it didn't have elements of something you'd read before? I thought that was what made comics so comfortable to read: the idea that they're borrowed from something familiar, something we know and like.

I suppose you could apply that to anything, novels, television, movies, that we use for escape.

Pappy, thanks! No, Though I had several versions to choose from, my scans actually came from Frazetta #1(1969). It's also reprinted in the beautiful Frazetta ICON volume as well.