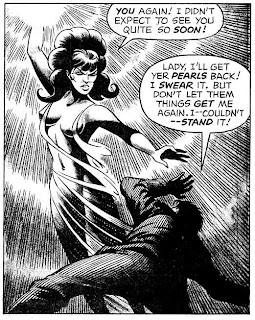 
The Man Who Stole Eternity


From Skywald's 1971 Psycho #3, a gem of a story by Golden Age great, Bill Everett. Everett, who had worked primarily for Timely/Marvel/Atlas, had left the comic book field for a time in the mid '50s, coming back to Marvel with Daredevil #1 in 1964.

This story, "The Man Who Stole Eternity," looks like he put some time into it; it's full of swirls and flourishes, tremendous atmosphere, weird creatures and a sexy girl, the sorts of things he did so well in horror comics work for Atlas in the early 1950s. Gardner Fox, another old-timer, wrote it. Fox, who wrote for nearly everybody in the comic book industry at one time or another, was facile with whatever genre he scripted. Superheroes, science fiction, western, horror...he did it all.

Everett, sadly, died at the young age of 55 in 1973; Fox died at age 75 in 1986. They were both there at the beginnings of the industry, very important in the history of the comics. 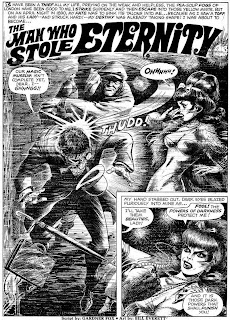 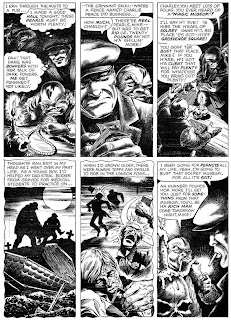 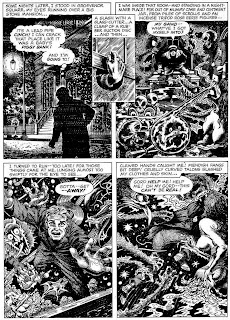 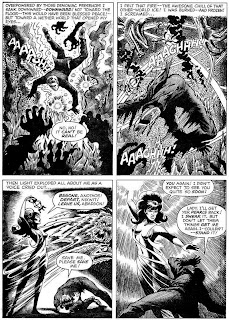 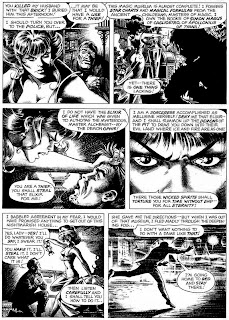 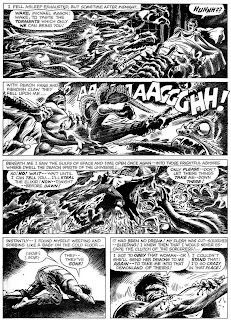 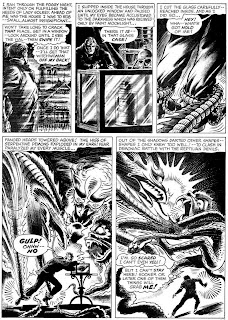 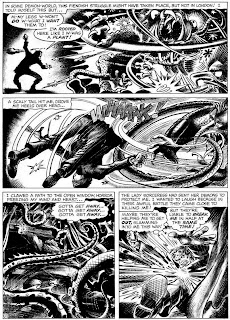 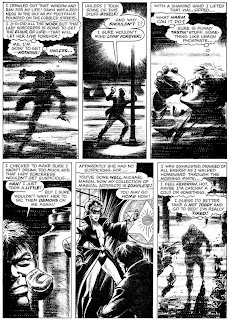 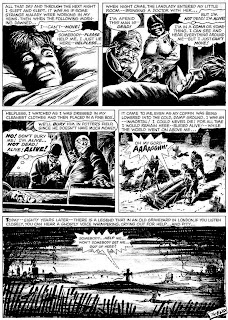 Everett!!! Man, do I love it when you post Bill's work here -- and this from a Black and White book, really showing off his amazing line work. Thanks so much, Pap!

Actually I'm not a real fan of skywald magazines, the art is cheap, compared to warren Publishing from the same years, but, this comic is amazing!

great blog by the way...

I have a slightly higher opinion of Fox's work that you do, as I don't know I'd describe the bulk of his work as "facile." (Although I suppose no comics are particularly deep when it comes right down to it.)

Where's my thesaurus? Steve, "facile," according to the dictionary, would indicate he did his scripting without much thought, so I obviously chose the wrong word.

Fox was a good writer and I enjoy his work. My intention was to say that he moved between the multiple genres of comic book formats with a great deal of skill.

I've never had a single Skywald comic and this is the first story that has made me regret that!

I know that "facile" is the French word for "easy." That could apply if you meant to say that Fox made comics writing look easier than it is.
Fox did not limit himself to comics, also writing for pulps and paperbacks in a variety of genres.

It is sad that Bill Everett lived no longer than he did, but he really shone in this story!

I beg to differ with Steve Miller, even though I've liked much of his band's musical output*.

My understanding of your use of 'facile', Pappy, was exactly what you seem to've intended: the amazing Mr. Fox had a facility for writing in many different genres, to such a degree he made the act of writing LOOK effortless.

Skywald was fairly low rent, but it's hard to write them off completely with work by Morrow, Andru, Shores, and Everett (and a cover by Jeff Jones!!!) cropping up now and again.

And Steve, while I'm sure you meant no disrespect with the "no comics are particularly deep..." I do think Art Spiegelman would argue against that rather convincingly.

I looked up facile in the dictionary and discovered a meaning for the word that I was not aware of... I thought it meant "shallow" but it can also mean "easy" like another poster already stated.

I hang my head in shame over my poor command of the English language while changing my stance to one of AGREEMENT you, Pappy.

I once again learned something from reading your blog! :)

And I have to say I agree with John, too. I've even argued against the position I expressed in that comment. I was trying to be a good guest while misunderstanding Pappy's statement. (Well, it was also colored by the fact that I've been revisiting a whole bunch of my favorite comics recently and found that they were far better in my childhood memories than they seem to be in reality. :) )

Steve, when I used facile it I took it to mean easy, as in "easy for Fox to switch between genres," but when you commented I looked the word up and understood how you had taken the less flattering meaning of facile, that of shallow. So that is a problem with written communication, that I make myself understood and not cause confusion by using a word that can have another meaning. I think you were correct to write me, and I should have used a synonym that more clearly defined my meaning.

However, even after the discussion I've left the word facile in the body of the post's text, because for better or worse, I can't find another short word I like better for what I was trying to say. Apparently some others of my readers agree, so Steve, I agree with both you and the other readers who called you on your interpretation. It's just one of those things about the English language, where a word can have more than one meaning.

This comment thread has told me that someone is actually reading this blog. Like all the other bloggers I'm acquainted with I'm my own writer and copy editor (often a bad combination), so it's up to me to make sure I use the right words to convey what I'm saying.

Thanks to all of you for making the comments on this posting so lively.

Both the artwork and the story were great with this one, and a surprise ending. Well, at least a surprise to me. It played on some of my worst fears, being paralyzed and being buried alive. I sometimes suffer from sleep paralysis, so you can only imagine!

Sweet art and thanks for sharing, Pappy.

I have awarded your blog a "You make me Scream!" award here.

Jamdin, I appreciate you giving me the honor. Thanks.

I have ALL 19 Skywald POE adaptations posted on my blog in sequence.