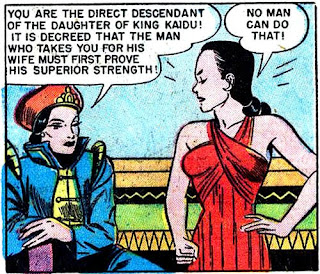 This is the last day of our EC theme week. Maxwell C. "Charlie" Gaines started EC Comics after selling his All American Comics line to DC in 1945. They'd had a co-publishing arrangement for years, anyway, and Max Gaines' heroes, Flash, Green Lantern, Wonder Woman, et al., were assimilated by DC. We go forward to 1947, the last issue of Animal Fables, #7, and the story of the "new" Wonder Woman, Moon Girl.

There were a lot of similarities between the characters, but Moon Girl was missing a couple of key elements that made Wonder Woman so memorable: Harry Peter's outrageous artwork, and Wonder Woman creator William Moulton Marston's bondage themes. Moon Girl was drawn by Sheldon Moldoff, who had worked for Gaines at All American. Moldoff later went on to do a variety of genres, including horror comics for Fawcett, but settled in for a steady gig as Bob Kane's ghost artist on Batman in 1953.

Moon Girl was short-lived. Her comic book morphed from #1, Moon Girl and the Prince, to #2-6, Moon Girl, to #7 and 8, Moon Girl Fights Crime, and finally A Moon...a Girl...Romance. She was the only super-powered character to appear in EC Comics (unless you count Freddy Firefly or "Comics" McCormick).From the looks of the history of EC after its founder died, it's clear that his son, Bill, who inherited EC, had other ideas about what would sell, and superheroes weren't in the mix. 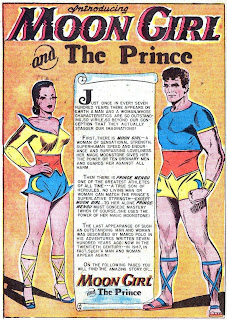 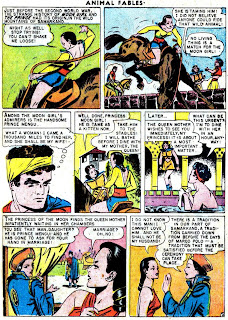 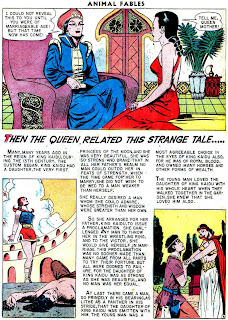 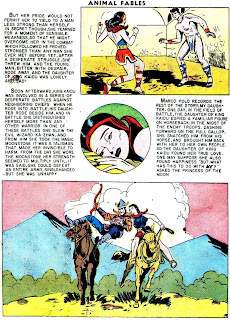 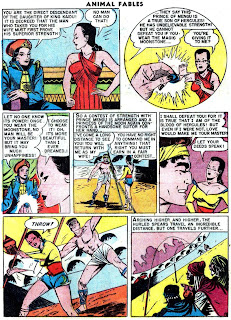 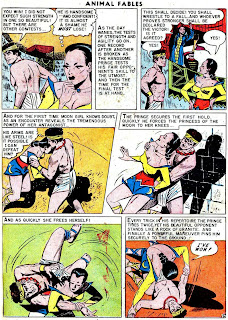 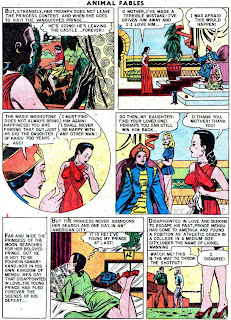 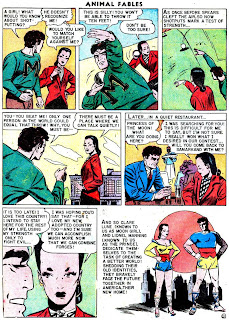 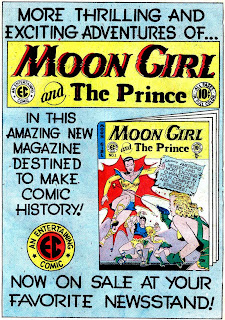 One of the things I've loved about this blog, Pappy's how many times you've put a name to the work of artists who electrified me throughout my childhood.

You've also managed to shock me out my cotton socks a few times, too, as for instance when it finally dawned on me Basil Wolverton wasn't some young happening 21st Century retro pastiche style social commentator!

And now you've gone and done it again with Moon Girl.

Up 'til now I've laboured under the illusion Emma Peel and Honey West, (those formidable ancestresses of Laura Croft and all those other two fisted modern movie gals who standardly rush to the rescue of all us trembling defenceless 21st Century males), were something new.

On hindsight, of course, such critters were right in front of me from the beginning, e.g. Wonder Woman & the Black Widow.

But it took you - with a little help from Moon Girl - for the penny to finally drop, (again!).

If you keep coming to my trembling defenceless rescue like this, though, I'm eventually go'n'o have to obey the spirit of the times and redub you from Pappy to Mammy!

I was surprised you listed the "Introducing Moon Girl and the Prince" story from Animal Fables #7 (Nov/Dec 1947), since I always thought it came from the first issue of her own title (Fall 1947). Looking at the GCD, they also list it appeared in Happy Houlihans #1 (Fall 1947). I wonder where else it appeared, and hasn't been documented (yet)?

I was also surprised you called the publisher "Charlie" Gaines. I've never read him referred to as anything other than "Max". It's always a good day when I learn something new!
Thanks,
Darci

Darci, I wish I could point to the exact reference, but I believe it was in an issue of Alter Ego where I read Maxwell Charles Gaines was referred to as Charlie, and not Max.

I remember little factoids like that, just can't ever remember where I saw them exactly.

Gaines was born Ginsburg or Ginzberg, according to the Junior Woodchuck's Guidebook of the Internet, Wikipedia.

Tales of strong women have always been amongst us, going back as far as humans go. As a lad I had my ass kicked by a girl, who whupped me good, threw me in a snowbank and washed my face with snow. Of course, being me I didn't fight back too hard. Like the girls and women in my life who followed her, if not physically but emotionally, I was a total wimp.

That more than you want to know there, bwah?