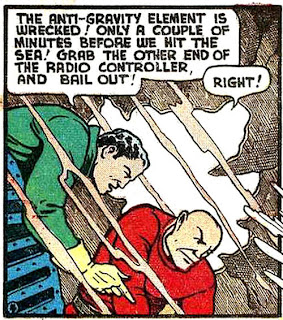 
We've had some fun this week, and we'll end the week in the same way. Spacehawk was Basil Wolverton's creation, who started his run in Target Comics #5 as a strictly off-this-world spaceman who fought Wolverton-style grotesque aliens. As World War II began Wolverton's editors told him to bring Spacehawk to Earth so he could fight our enemies. Wolverton is said to have protested this change, and in retrospect he was right. Spacehawk didn't last long after that.

Even after the theme of Spacehawk was changed there were still memorable stories in the Spacehawk canon because they're by Basil Wolverton, who never drew an uninteresting comic in his life. He was famous for his funny dialogue and funny names, and for an alien name "Dork" seems great. In 1942 when Basil drew this he was probably thinking of a good, punchy name, not realizing he would be making us laugh almost 70 years later for reasons he couldn't anticipate. 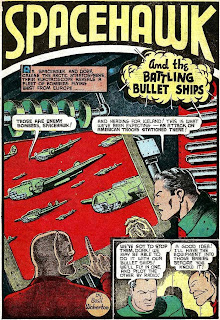 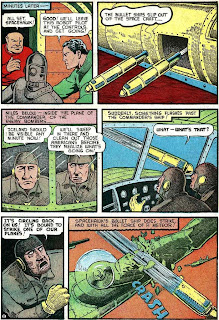 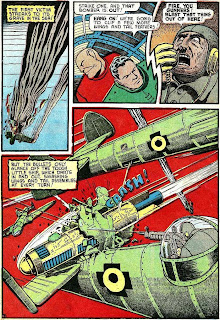 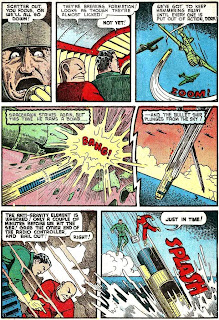 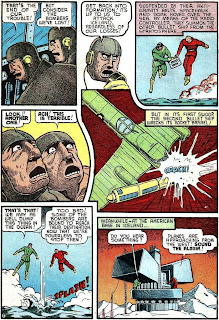 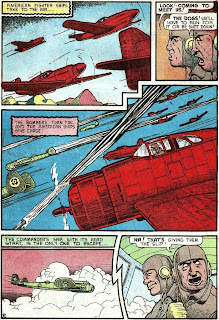 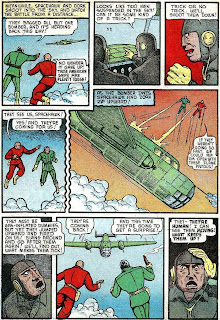 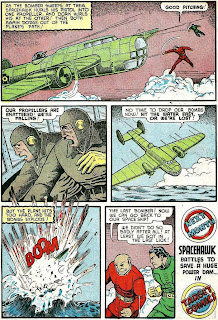 Make sure you come back on Sunday for the beginning of a special Jungle Girl week. We're kicking off with a Sheena story, and will follow each day for six days with beautiful jungle babes.

Thanks for the Spacehawk post. I am familiar with Basil Wolverton's far out humor works but this is actually my first exposure to his adventure work. This storytelling is very effective. He makes sure you can follow what is going on and how the characters feel about it. I enjoyed this.

Bob, you owe it to yourself to look up the several reprints, in comic book form and otherwise, of reprinted Spacehawk stories. All of them are in public domain and several publishers, including Dark Horse (sorry, I don't have a list of them at hand), have done compilations. They're also on the 'net in various downloads of early Target Comics.

Wolverton had a very straight ahead writing style, I agree; I don't detect any subtleties, but I don't see many (if any) subtleties in early comic books, anyway.

Yeah, this stuff by Wolverton is always interesting to look at.

Funny, as I was sitting here reading Spacehawk, I did begin hearing the jungle drums beginning to thump ....

Great post Pappy! Wolverton was such an inovator. He was in many ways much in advance of his time. Take for example the logo work on the title page... great stuff. I love your recent posts so much I've added you to my blogroll, and signed on as a follower. Thanks for providing a terrific education for all of us on comics golden age.

Has Robert Crumb ever claimed Basil Wolverton as an influence? I see a definite resemblence. Even the lettering is similar.

Great stuff, Pappy! Wolverton proves that it is the innovator who walks his own path, rather than the artist who tries to play it safe and fit in with the mainstream style, who ultimately finds success, and it is his uniqueness which sets him apart from the rest. That which some may call his weakness is really his strength.
You can post more Wolverton anytime...but after the jungle babes!