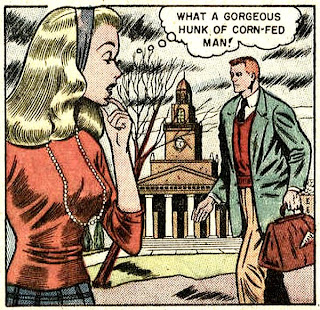 
Bill Ward drew this story, a "pulsating tale" as it claims on the cover. Got me pulsating, all righty. As usual, Ward's girls are some of the sexiest to ever appear in comics. Tess, in "They Said I Was Too Fast!" is a Torchy-clone, and there is nothing wrong with that.

Love was about the most popular genre of comics at the time Campus Loves #2 was published in late 1949 by Quality. They were supposedly bought by girls, but I wouldn't doubt that a lot of boys — and men — read these things, too. Especially when they saw Bill Ward's gorgeous leading lady. Love comics were written and drawn for young women by older men, and seemed to follow some male-female prejudices. The girl who teases isn't well-liked by guys, and Tess fits that description. Man, how she worked over poor "corn-fed" Elmer..."Hey, Elmer, is that a corncob in your pocket or are you just happy to see me?" Still, love triumphs in the end, doesn't it? That's why it's a comic book and not real life. 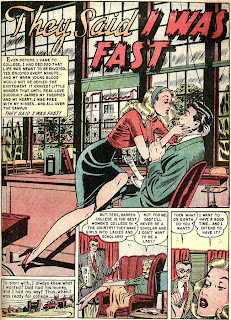 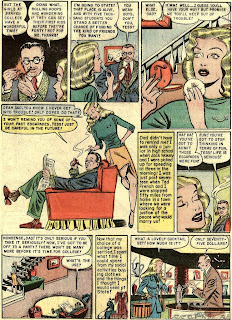 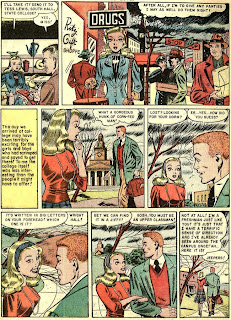 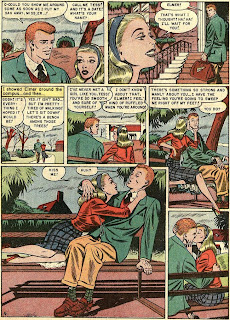 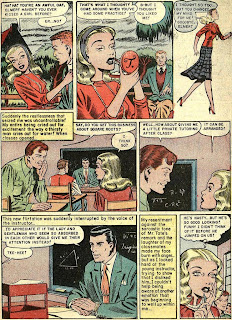 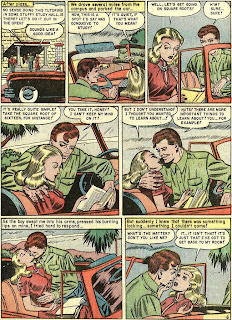 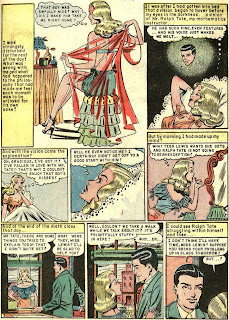 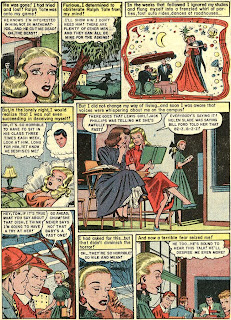 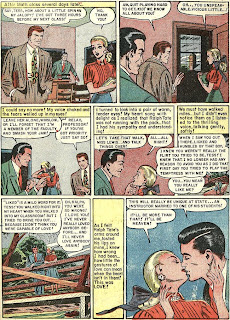 Wow! That is a gorgeous splash! I think I like Ward's style here better that his later, more exagerated 'adult' cartoons. I love the way he drew her hair! Cool comic, great post, Pappy!

Yeah, even though his later adult-oriented stuff is lots of fun, I like this Ward better too.

This is a terrific post, Pappy. I would have unabashedly purchased these books - had I been around in the golden age.

The artwork was just too good on many of these romance comics.

I admit I passed on love comics until I started reading some of the pre-Code titles.

John Benson has done a couple of really great books on the pre-Code love comics: Confessions, Romances, Secrets, and Temptations, Archer St. John and the St. John Romance Comics, and Romance Without Tears, which reprints about 20 St. John love stories, most illustrated by Matt Baker.

Whoa, and I thought the Cave Girl post was sexy! Ward rules. Of course.

Oog. Getting involved with a student while she or he is still in one's class is a major breach of academic ethics. In fact, I'd contend that an instructor shouldn't even signal any interest until a change-of-grade can no longer be filed.

Thanks for this fine story! Bill Ward had worked with Jack Cole for a while at Quality, as one of a half dozen or folks who inked Cole's pencils on Plastic Man between 1946 and 1950 or so. As someone else said, this period of Ward's art is great, before he began to exaggerate. Still, it looks like two kittens are loose in our heroine's sweater... not that I'm complaining! Also interesting to note the use of a Leroy Lettering guide on this story.

Pappy: Yow, is that hot! Particularily when the "teacher" puts his thumb on his student's bottom lip and suggest they go for a walk. Yep, the artwork is great, all right.

Man is this stuff hot. I loved the opening splash page with "What a gorgeous hunk of corn-fed man!" That pretty much set the tone. -- Mykal

Welp, there goes his tenure.

Great art by Ward as always.