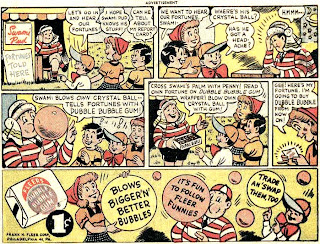 
These Fleer Dubble Bubble ads are taken from DC and Fawcett Comics of the early 1950s, circa 1951-54. They're drawn by Ray Thompson, an oldtime cartoonist who went into advertising.

Pud, who looks like Tubby Tompkins' first cousin, and his gang, are featured in these Sunday-style strips. They (of course) prominently display the bubble gum product the kids are selling. What I remember about Dubble Bubble was if it wasn't fresh it was a tiny pink brick which could break your teeth. You worked it in your mouth to get it softened sufficiently to chew. The flavor didn't last very long, and was usually gone by the time you could make a bubble.

Pud and his gang hung around places like haunted houses. 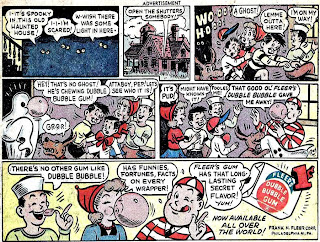 They promoted international goodwill by helping a boy who didn't speak their language. And, of course, with Dubble Bubble gum. 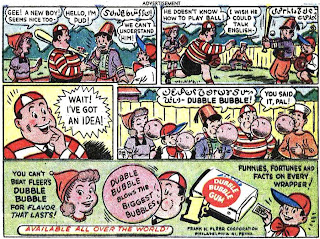 Pud was a hero. He single-handedly foiled robberies, just by using gum! Pud's gang could be a little kinky, playing pirates and bondage. Pud saved his sister, tied up by his friends. Heh heh...it's all in fun, isn't it, Pud? No need to get hostile. Have another chaw of tiny pink bricks. 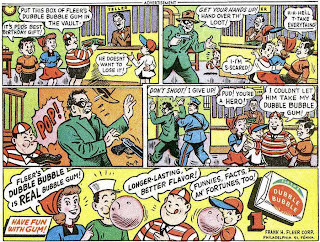 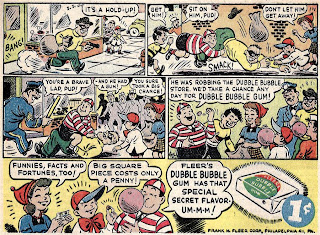 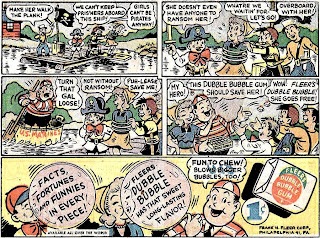 Pud gave out really bad advice. Kids, listen to Pappy, not to Pud: Bears in the wild are not tame. Every year there are campers who get mauled by bears. Do not mess with bears. 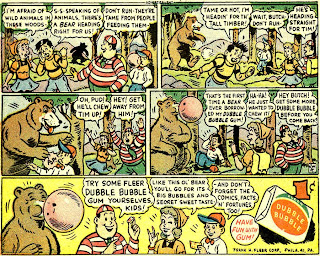 Pud and his gang visited the zoo and despite the "Do not feed the animals" signs they give a chimp some gum. Some fun! 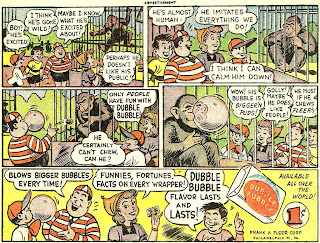 The Dubble Bubble kids went to exotic locales, including the frozen north... 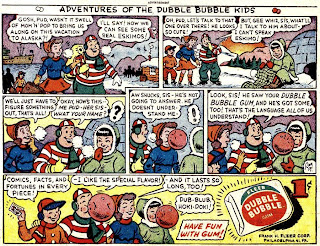 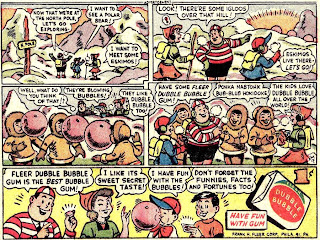 ...and the land of the headhunters. Hope they got away before the flavor of the Dubble Bubble disappeared and the headheader got interested again in their heads. Where were their damn parents? 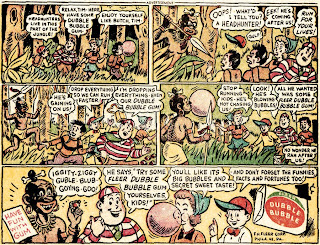 They showed up in India, where they met a snake charmer: 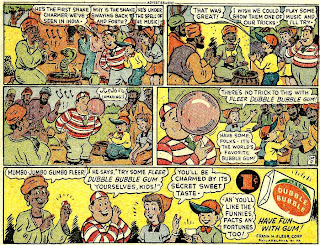 Pud and his friends didn't practice safety when playing. Once again kids, listen to Pappy. Do not shoot arrows in the direction of your friends. 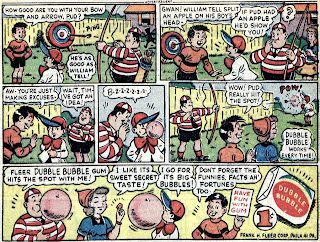 Finally, the Pud Posse were able to defy the law of gravity with bubble gum. 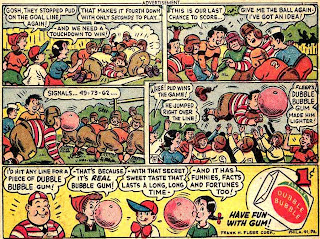 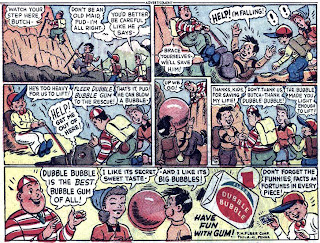 The ads were so well known they were the target of satire in Mad #21, drawn by Will Elder. 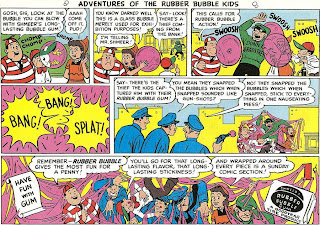 Thompson also did the campaign for White Cloverine Brand Salve, another advertiser ubiquitous in comics. The history of the Wilson Chemical Company, which produced the salve, is interesting in itself. 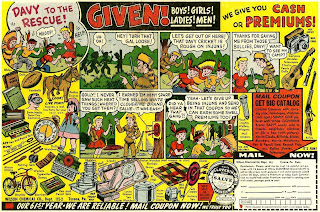 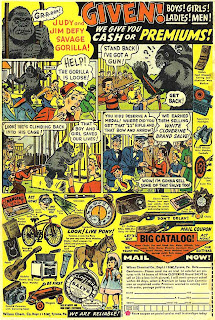 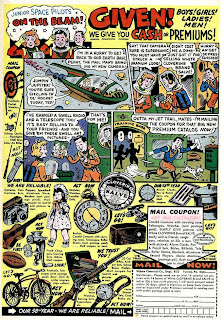 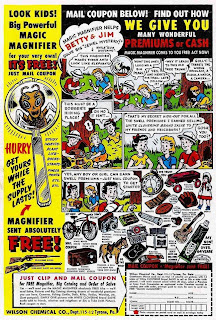 It's Thanksgiving Week. Even with travel and get-togethers I'd like you to stop in on Thursday, November 26. I'm not going anywhere. I have Pappy's annual Turkey Award, given to the dumbest Golden Age story I've read this year.

Great post, Pappy! Brings back memories, some of which revolve around an R. Crumb parody of Pud that was not for kids, so to speak.
Thanks, as always.

I was going to include that Crumb parody but decided not to for reasons obvious to anyone who has seen it.

I seem to recall National Lampoon doing a spoof of the White Cloverine Salve ads. In their version of the ad, selling salve door-to-door was touted as a way of casing houses that one could then revisit late at night or when the occupants were away in order to collect nifty "prizes" one could then hide in the hollow of a tree.

Wow, I didn't realize there were so many of these, seems like in all the golden age comics I have they only repeat the same 3 or 4 adventures (the haunted house, pirates and undersea.) Cool post Pappy, I totally wanna see PUD and his gang rumble with Bazooka Joes.

Pappy: This is one great post. I loved these comics as a kid, and I just had the wildest sort of memory of the taste of that gum, looking over these comics (I have better memories of the gum than you do!). For me, the memory goes hand in hand with early comics memories - I got my comics as a kid from a Rexall's Drug Store - comic rack and candy, all in one stop shopping.

The art was always very good in these, very cool and loose. I'd love to see this stuff get a retrospective, hardcover treatment.

Oh, and thanks for giving the artist's name. I always wondered. -- Mykal

This was a lot of fun! Thanks for this one, Pappy! There is something inherently evil about Pud and his gang - notice that 'Sis' makes the sign of the devil and winks in a couple of those old ads! I have seen a few of these before and I always laugh at those cloverine ads, too! It is a normal thing for young children to wander around the zoo with their bow and arrows, and .22 rifle in hand, just in case some of those caged animals get uppitty...or in case they need another cotton candy...comes in handy - Thanks, White Cloverine brand salve!