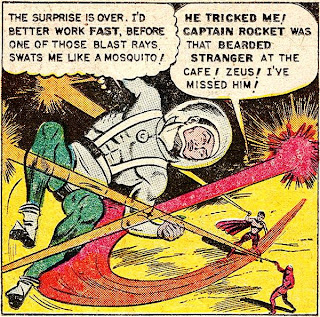 
Graveyard of the Rocketeers! 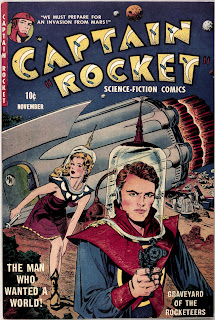 At one time I heard that Harry Harrison had something to do with Captain Rocket. Harrison was Wally Wood's collaborator for a time, and went from comics into being a world famous science fiction writer. But whether he had anything to do with this comic I don't know. I'm not an expert on Harry Harrison’s comics work.

Captain Rocket is space opera, pure and simple; Planet Comics stuff...rocket ships that look right out of Buck Rogers, ridiculous costumes, and girls who wear bikinis as everyday clothing. It's so simple-minded that Captain Rocket can disguise himself as a bearded rocket ship navigator in a crooked gambling joint, and you know he's a navigator because it says so right on his tunic.

I love this sort of thing. In spite of its built-in dumbness the strip is great fun. Captain Rocket may have been doomed by low sales or poor distribution. I'll be posting the other three stories from the comic at some future time. 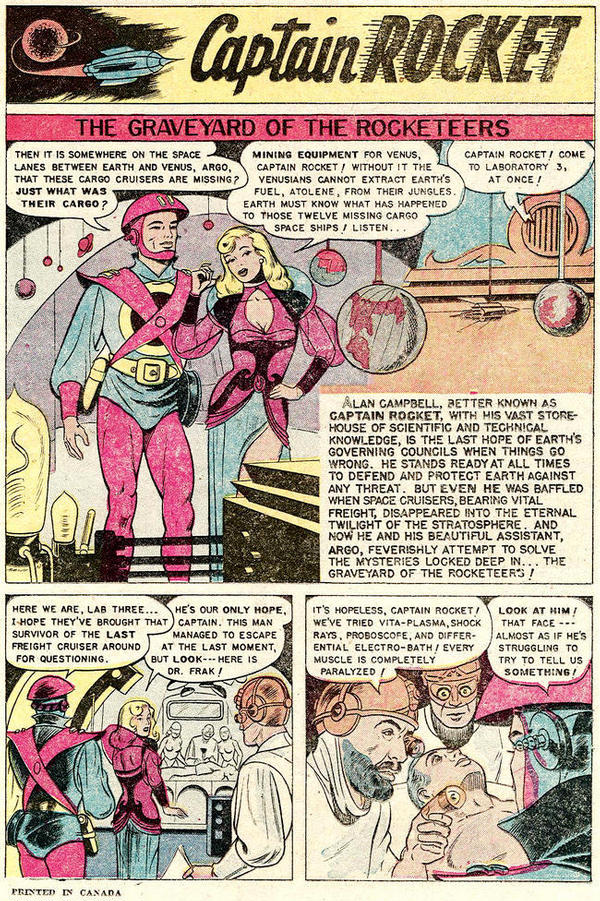 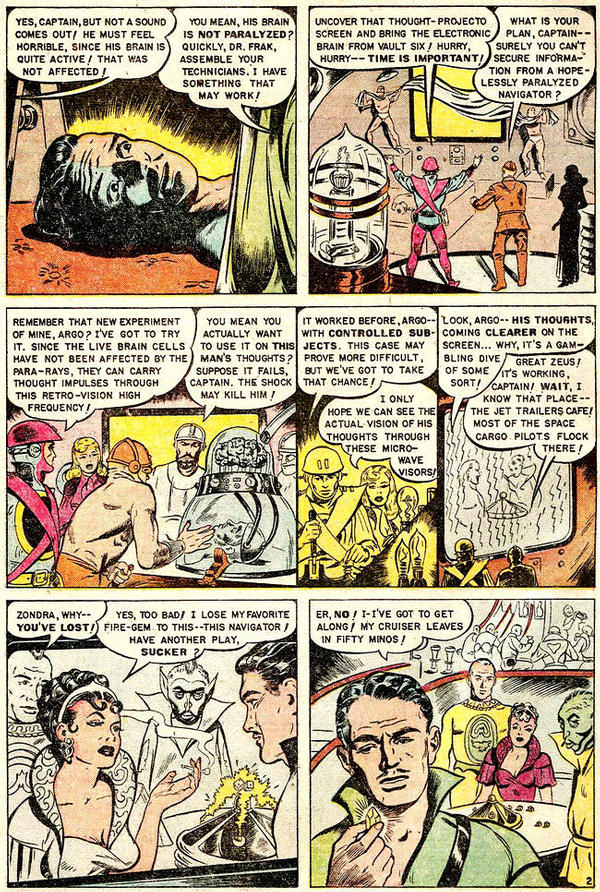 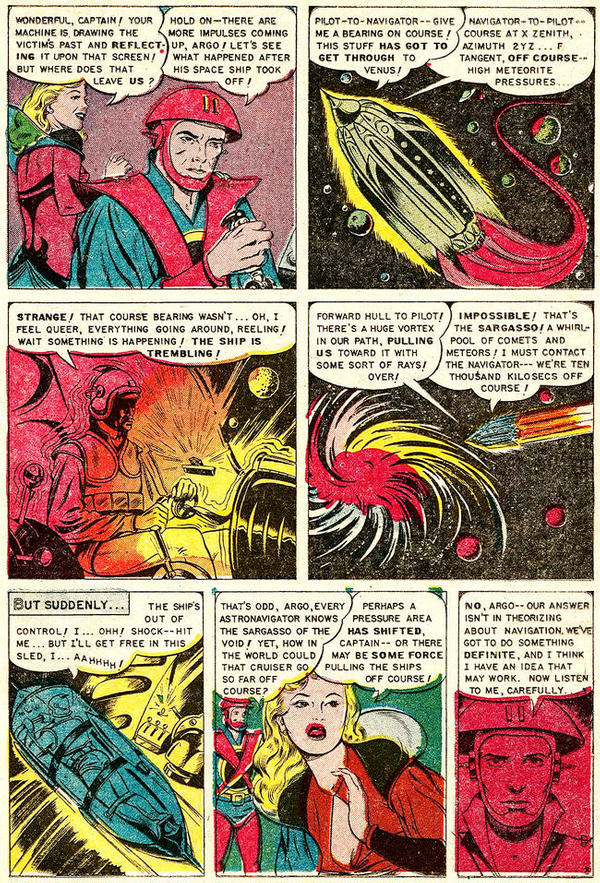 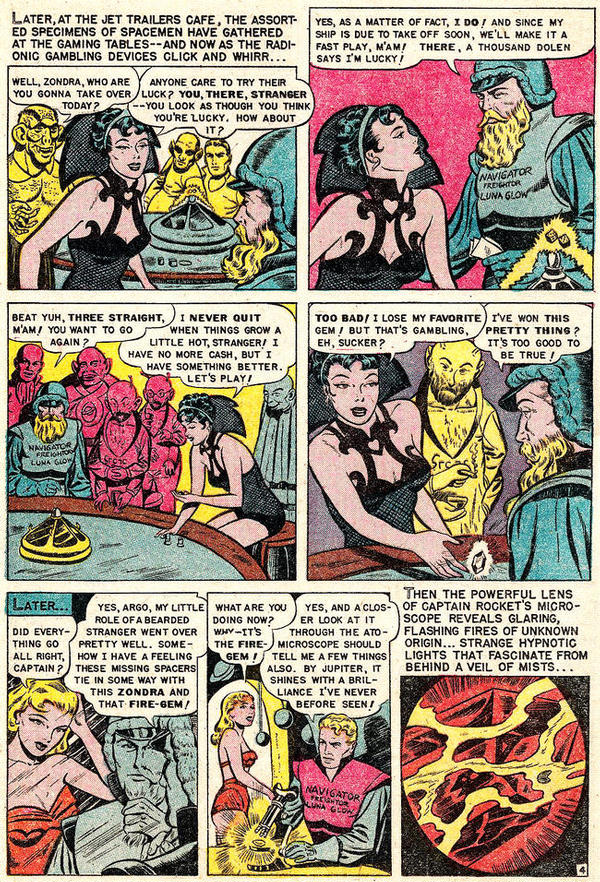 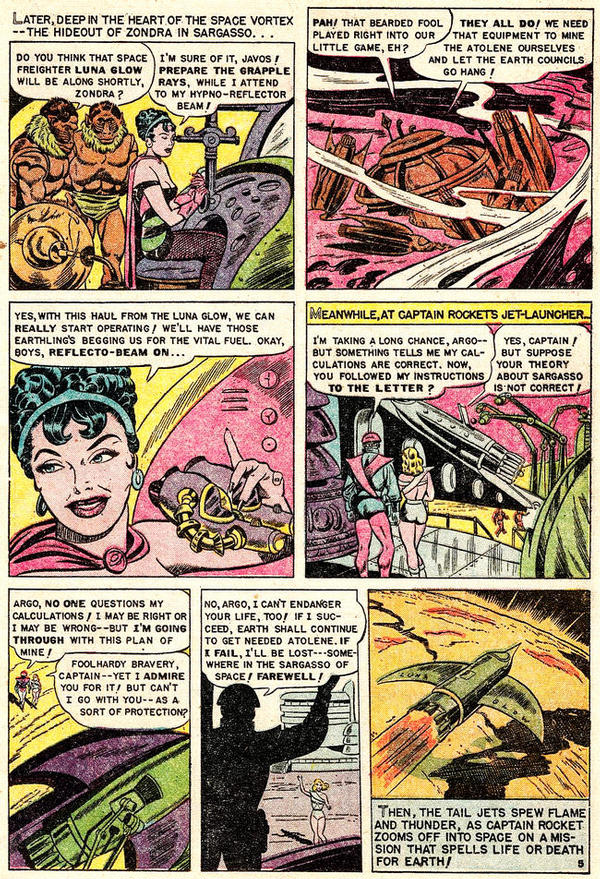 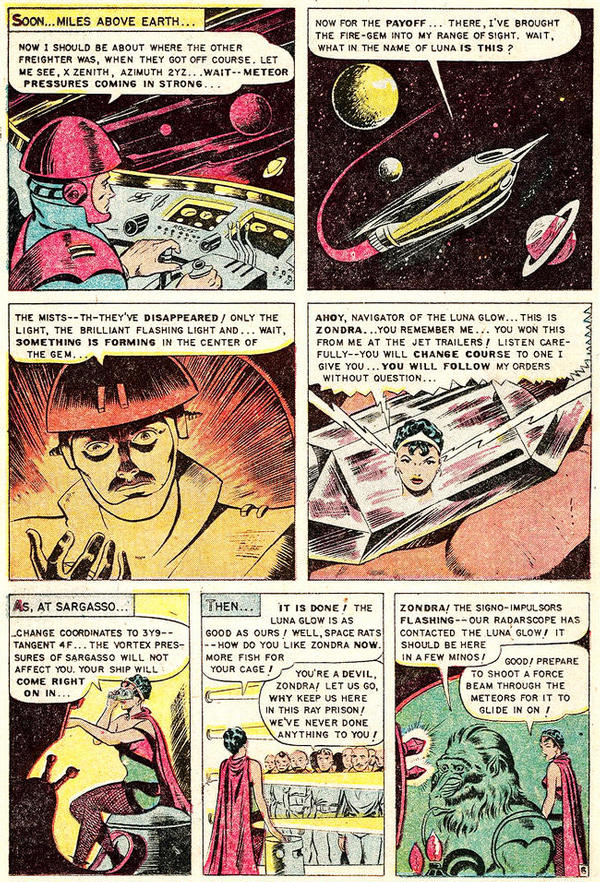 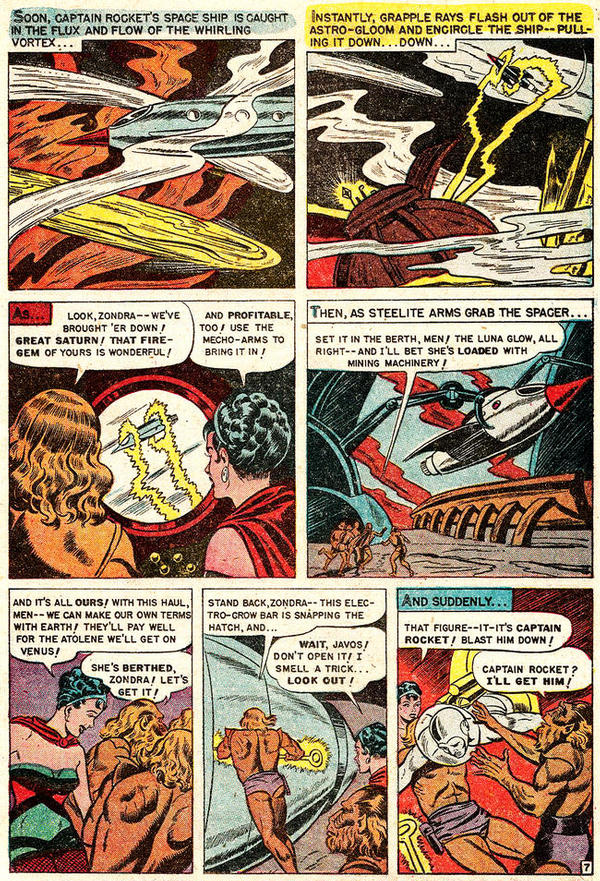 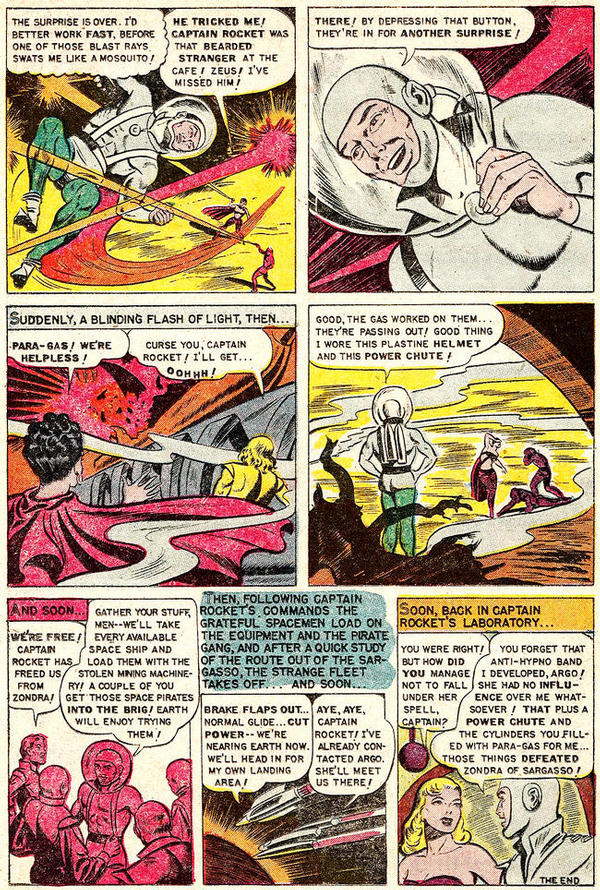 I've been called something of an expert on Wally Wood's art (although I wouldn't really go that far myself) so I know a little about Harrison and I just don't see it. Harrison by himself wasn't really that good an artist--one reason he switched fields. This is very stylized. Not the best storytelling I've seen but pretty to look at (when it's not getting crammed out by dialogue). Not a clue who but most enjoyable. Thanks for sharing!

This character is somewhat obscure to me, because I'm not sure I've heard of him.

Thanks for reaching way back into the vault to share this one with us.

FYI: The Canada Comic Book List (http://victoria.tc.ca/Recreation/Comics/CanTitle.html) has the following also by PL:

I'm not sure how my girlfriend would take it if I told her “No one questions my calculations!” but I cannot imagine that she would see it as one of my more reasonable moments.

Pretty fun and I hope you post some more of the good Captain. Thanks, Video Ranger!

Thanks for the comments, guys.

I really don't see Harrison in it, either, comparing it to his EC work at the time. I can remember reading about him having something to do with it but I can't remember where. If I were presenting this as a work of scholarship I'd be in trouble for lack of attribution.

I am always tempted when I include such gaffes in this blog to use Orwellian methods of re-editing the public record, but what the hell, I wrote it.

The second story from this comic, "Monsteroids of the Underworld," will be shown in about three weeks.

Thanks, Forrest, for the info on P.L. publishing.

I wouldn't feel too bad, Pappy. Wikipedia's entry on Harrison mentions Captain Rocket as a collab with Wood. A quick search says it may come from "Comics, between the panels" by Steve Duin & Mike Richardson, which I haven't read. Michelle Nolan may also mention it in a CBG article (Aug 22 2003).

Must be believed by someone: a NM copy went for over a grand recently.

I think the women look like lifts from Matt Baker but that's all I can see.