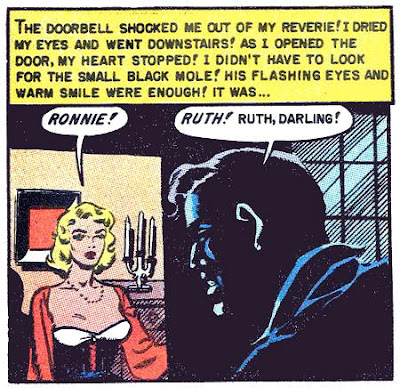 I have been a fan of Wallace Wood since I first saw his work in the 1950s. I read once he did not like the nickname “Wally,” so I have tried not to use it, although occasionally I have lapsed. “Death’s Double Cross” is the first time I have seen Wood sign his name as W. Allan Wood.

The artwork is better than the story, which is credited to EC publisher Bill Gaines and editor Al Feldstein. It was probably swiped from another story, because Gaines considered stories he read to be “springboards” for EC stories. “Death’s Double Cross” uses an old plot of identical twins; the female is married to one, but loves the other. At least Wood put his skills into the artwork. Something I like about the story is the enigmatic ending; I don’t need to have a denouement dropped into my lap. Sometimes it is fun just to attach my own ending to a mystery. I’d share it if I had actually thought of one. 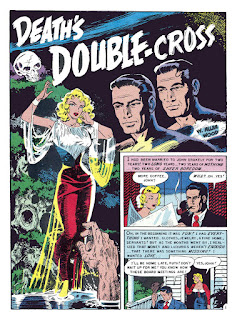 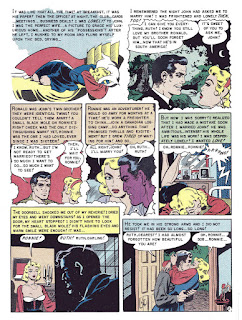 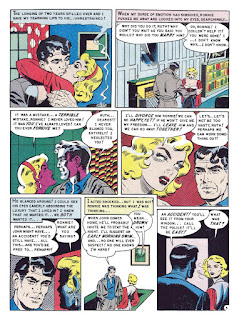 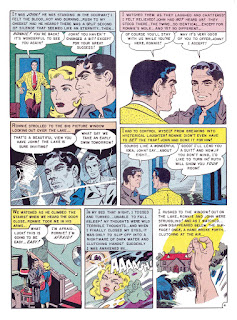 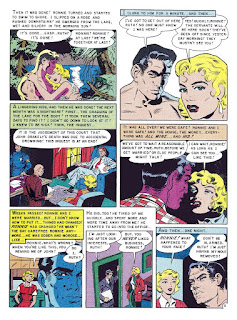 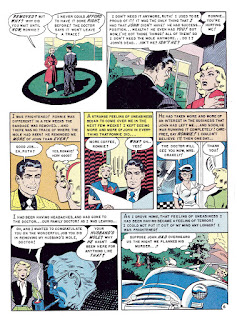 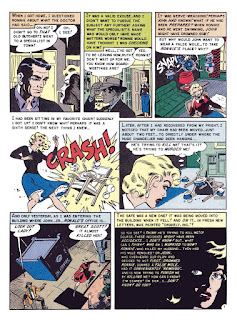 I agree that the ambiguous ending is a good change-of-pace.

Stories about supposedly identical twins disturb us when they offer two personalities with one appearance or two bodies with just one personality.

For what it's worth, the fingerprints and the ears of monozygotic twins are distinct. It might be hard to find a set of John's fingerprints with good provenance, but old photographs could surely be found.

Craig was the king of the crime stories at EC (and authored a bunch of them, he was good at that, too) but Wood does a fine job here, for a mostly talking head story.

I'm going to give Al (maybe Gaines) a break here as they were working out the formula. The last panel is especially kind of frustrating as you point out. Crime SuspenseStories got a LOT better in it's later issues, just like the horror mags did.

W. Allan Wood was Wally's evil twin!
I love Woody's art when he took his time like in this story. Panel 1 page 2 is perfect, how the lines follow her body, framing it.

Woody would have been 23, one year into his career.

Good story. Why doesn't she just run away? That would solve everything.

Daniel, I have worked with two sets of identical twins over the years, and there are subtle differences. I would expect a wife, especially, would know her "husband" was not her real husband during an intimate act. This story was strictly fiction, because I do not think anyone in real life could get away with it, except with people who did not know them.

You don't expect a book report for that manga,do you? I am busy enough now that I have to find time to read. Even comic book stories.

Darci, Wood got good fast once he started working regularly in comics. Of course, he did often have other people helping him, and once Wood laid down the distinctive inking it looked like he was doing it solo.

Bill, I wonder had Wood not worked for the highly regarded EC Comics would he ever have gotten the status he later had as an artist? That's a rhetorical question...I believe he would still have been admired, but not emulated and imitated as he became at EC.

Michael, oh yeahhhh. Wood could really draw the sexy ones! I remember my eyes practically popping out of my head at age 9 when I was first becoming acquainted with his work.

I don't want to make anyone feel obligated to read things to which I link, let alone to write commentary. Some of the stuff to which I link would be tedious for many people. But if someone has time to read that manga story of identical twins, I think that he or she will probably find it quite something.