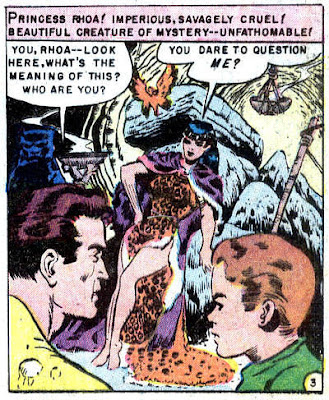 I believe that Wallace Wood drew better when he got a story he was interested in drawing. This story, “The Lost Kingdom of Athala” is one of those. It has a prehistoric setting, it has a beautiful girl in an abbreviated animal skin. And it even has a Wood-version of a Tyrannosaurus Rex. I read it, but I more-or-less dismissed the story to look at the artwork.

However, during a second look I did read it, and note, this is a spoiler: sexy Rhoa, the cavewoman ruler, says she wants to be like other girls of leading man Jack Rance’s world. I doubt she’ll be thinking that when she gets to that era in the time machine Jack and his young friend traveled in. She just doesn’t fit into that early '50s era, when women were expected to be in the kitchen or taking care of the kids. And speaking of time machines, that odd-looking mechanical device looks clunky to me, not as sleek as the devices we are used to seeing Wood draw.

The story was printed originally in Strange Worlds #4, an Avon comic from 1951. My scans came from a 1958 IW reprint, Strange Planets #9. 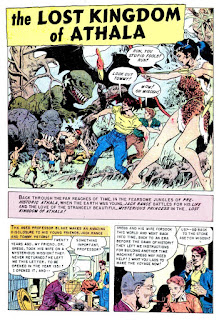 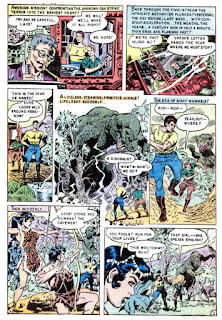 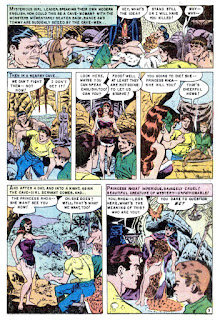 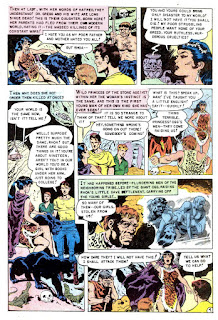 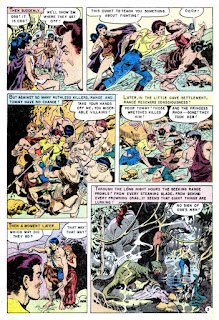 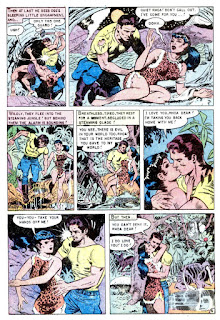 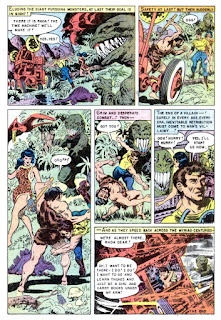 I wonder whether there are any earlier comic-book stories in which the child side-kick was killed.

They're going to have an interesting time explaining to the Peters what happened to Tommy. Who knows, perhaps they stepped on the wrong butterfly and Tommy was never born in the future they return to?
Thanks!

Well Rhoa certainly had a change of heart in a hurry. Of course she had only 6 pages to do so and of course there's the old male fantasy that a mere glimpse of biceps and a solid sock to the jaw and the girl is yours.

So many questions for this story. Being time travelers why would Rhoa's parents leave a letter with instructions to not open until 1951, twenty years after they took off for the stone age? What difference would that make to them? What point you leave from the future is pretty irrelevant.
And why instruct them to set the thing for a certain year? Did they want to make sure that Rhoa was of legal age before our intrepid hero found her? Or perhaps they wanted whoever came from the future to see the utopian society they had built in the twenty years upon their own arrival in the stone age. That didn't seem to work out so well though if that was the intent. Didn't seem all that utopian to me. If they hated their own era so much why would they want to be found at all?

In any case, Rhoa is in for some serious culture shock once she reaches 1951. After years of ruling over "her people" she's going to find it hard to adjust to a world where she is just a girl with a book under her arm. And does she even know how to read? How old was she when her parents died? Did they bring books with them? Did they teach her to read? Who knows? Heck, Jed and his kin merely moved from the Ozarks to Beverly Hills and they never adjusted to "city ways". What chance would poor Rhoa have?

Of course there is the usual dichotomy between the men and the women of this caveman group. Men all look like Neanderthals and of course the women are all beautiful supermodels. Though I may be overstating that. Other than Rhoa we do only see the servant girl who of course is gorgeous. Rhoa of course doesn't count as she was born to modern humans.