Number 2248: Hero and the Porcupine 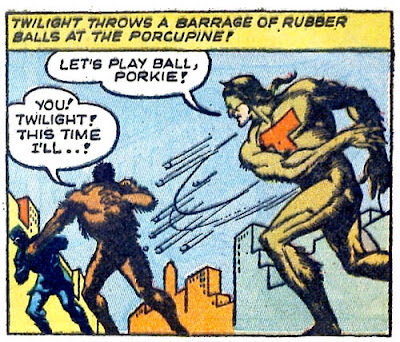 Twilight is another character from the moldering archives of old comic books. He appeared in Hillman’s Clue Comics #’s 1-5, 7-9, and then like a lot of masked crimefighters, was gone. I can't say I like his costume; the color is what I’ve heard described as “sh-t-brindle brown.” In this story he is up against a character called The Porcupine, which may be one of the more unusual villains I have seen. And yes, Porkie (as Twilight calls him in one panel), shoots quills.

Twilight is credited by Public Domain Super Heroes and Grand Comics Database as being created and drawn by John Cassone. Comic art spotter extraordinaire Jim Vadeboncoeur Jr also claims in a note with the online scans that Reed Crandall worked with Cassone on the story. I see figures that look like Crandall’s...and I know Cassone and Crandall both worked for early Quality Comics. The only biographical information I can find on Cassone is in an obituary published online that gives his birth year as 1923, and his death in 2008, making him 85 when he died. He would have been about 20 when this story, and his stories of the sexy Black Angel, were published in Air Fighters Comics, also published by Hillman. You can find a link to a Black Angel story below.

There is also a talking parrot who goes around with Twilight. Talking animals weren’t common, like the underage boys who were sidekicks of superheroes, but I have also seen some other non-human sidekicks. 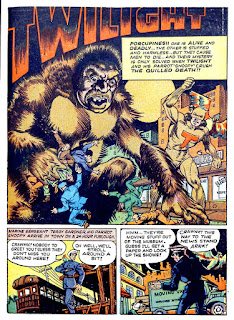 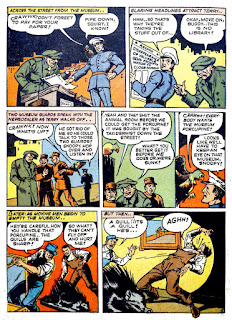 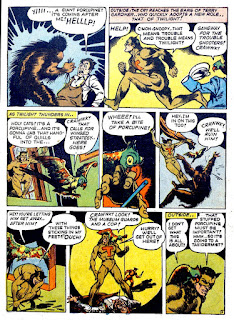 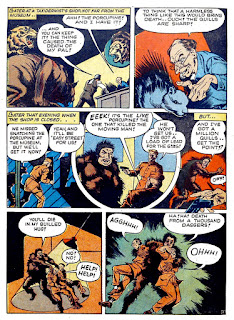 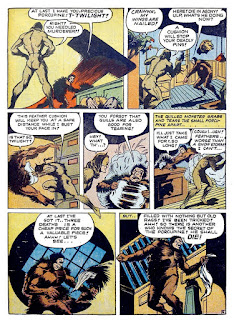 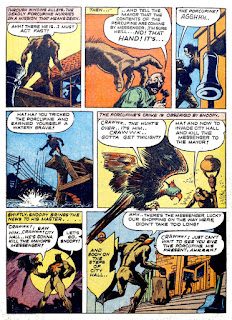 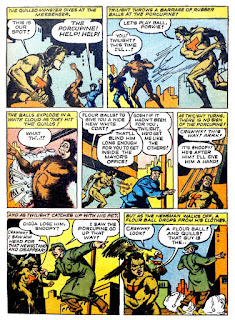 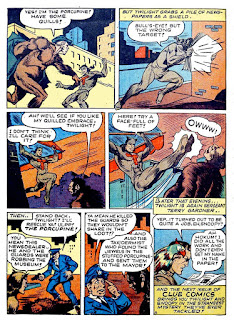 Here is a story by John Cassone of the Black Angel. It is from Air Fighters Comics #3. Just click on the thumbnail. 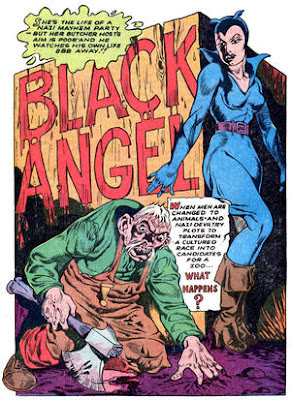 Okay, so the costume of Our Hero was basically footie pajamas, allowing quills to penetrate his feet. Then, he lost a pillow-fight, and was thereby so disequilibrated that he allowed the murder of the taxidermist. The taxidermist didn't call the police to take the jewels, but instead summoned a messenger to take them to the mayor. Before our hero rushed to the aid of that messenger, Our Hero paused to buy rubber balls and to fill them with flour (better than a gun and bullets any day).

Just why does Our Hero combine the name “Twilight”, a shaggy costume with horns or ears, and a colorful parrot of exceptional intelligence?

I'm with you Pappy, that brown ... that was a bad idea. And the villain, a bit more ape than porcupine, was also brown. That was a lot of brown for one comic! Thankfully, the parrot was pretty brightly colored!

That said, the action and movement was good for an early 40s comic, where a lot of them were drawn very statically. So Cassone (and possible Crandall) did a good job here.

I do like the porcupine, he had an actual interesting super power that wouldn't be out of place in a Marvel comic of the 60s (and wasn't, there's a character with the same name/power but much better look.)

Sweeeeet. This very story is reprinted in Craig Yoe's new book, Super Weird Heroes: Preposterous But True! Vol. 2 but I hadn't gotten to it yet, fascinated as I am with weirdo superhero Hip Knox.