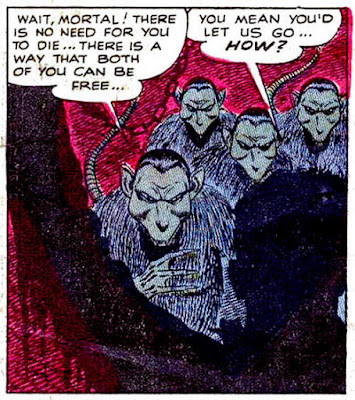 I have been called a rat before, mostly by girls when I was still a teenager, but I never chose to be a rat. You see, according to “Men With Fangs!” this is how rat men come to be: They have to agree to join the league of rat men. And as the rat who moans that it is hard to get new converts explains, “It is so hard to get a human’s consent!” I have no difficulty believing that, even if the rest of the tale seems beyond far-fetched.

The ratty story is from Atlas Comics’ Suspense #25, and is drawn by Joe Sinnott. 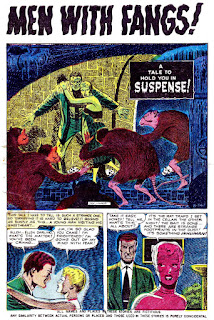 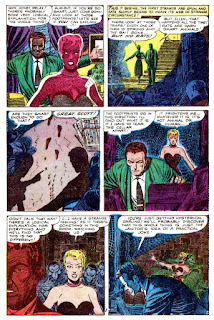 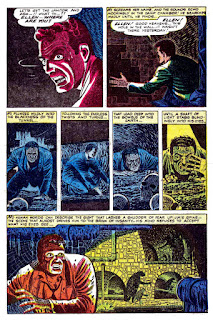 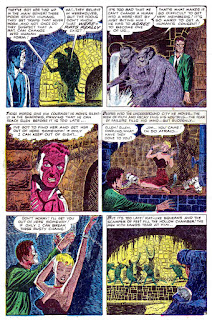 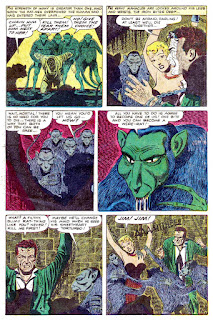 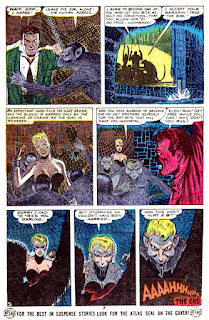 Forget who drew this, who colored it? What a display! Were all Suspense's stories like this?
Thanks!

Darci, hard to tell, since I am not one to recognize who colored comic books (unless I know in advance, like EC Comics' Marie Severin), and because I am still having eye problems even after cataract surgery. How's that for a cop-out?) I'll leave it to someone else to answer with what they think.

It seems to me that this story is a metaphor for a man feeling tricked into marriage by a woman deliberately getting pregnant or making a claim of pregnancy.

Joe overdid the hatching a bit here and then the colorist didn't do it any favors after that. Still, it's a good Atlas tale and it's full of cinematic panels (the crawling through the tunnel and the woman becoming a rat are all done very well.)

Atlas coloring was really hot or cold. At times, it was great, and others it stamped all over some of the great artists of the day.

Great article..I am looking so forward to your blogcomment and
I love your page on your post.. That is so pretty..
ดูหนัง

I'm sorry about your eyes Pappy. I hope they improve.
I love your site. Thank you.
These Atlas stories are always really fun to read.

I'm sorry about your eyes Pappy. I hope they improve.
I love your site. Thank you.
These Atlas stories are always really fun to read.

I guess most of the Atlas Comics interiors (and all the covers) were colored by Stan Goldberg, who rose to the head of the department when the company was still called Timely (if I'm understanding the timeline correctly). So even if he didn't do this color design with his own hands, he'd have had a lot of influence on the house style.

Great story, by the way! This was an excellent week for a harrowing tale of consent.

This is a story to come back to. A real winner.
I thought about Daniel's comment about the story being "a metaphor for a man feeling tricked into marriage by a woman deliberately getting pregnant or making a claim of pregnancy."
I can't see the baby part but I can see it as a metaphor for an anti-semitic person being tricked into converting to Judaism through love and marriage. The family insists!
Hitler and the Nazis spoke of Jewish people specifically as vermin and often drew them as big anthropomorphic rats similar to these for propaganda!
After reading the story the first time, I remember thinking it wouldn't be that bad. He still has such a pretty wife and she wasn't trying to murder him, just convert. I mean he can even switch back and forth in form.
That could symbolize the easing of some anti-semitism after the world learned of the concentration camps.
Jewish people stopped changing their names as much.
They can mingle in public without being spotted now.