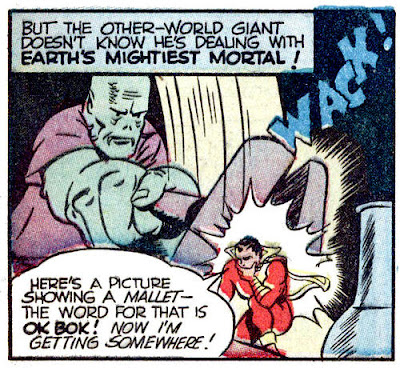 Otto Binder wrote over 900 stories for Fawcett Publications featuring Captain Marvel and members of the Marvel Family. He began his long career with the Big Red Cheese in 1941, and “The Sky People” is an early entry in the saga. I can usually spot a story by Binder, especially for Fawcett, by his use of humor. Like most Otto Binder scripts, the story is light. It reads to me as a humorous alien abduction story.

It would be two or three decades before so-called “alien abductions” became part of the overall UFO/Flying Saucer story. Today on cable television and streaming video services there is an entire industry of UFO sightings and conspiracy theories about the government withholding “the truth about UFOs.” Outside of comic books Binder wrote extensively of UFOs, although he used the older term, flying saucers, for the unknown objects in the sky. His book, What We Really Know About Flying Saucers, was published in 1967 at the height of a UFO flap. But “The Sky People,” shown here, was published five years before the sightings by pilot Kenneth Arnold that kicked off the flying saucer mania in the late forties-early fifties. In the story, published in the year America joined World War II, aliens not only abduct everyday American citizens, but also Hitler!

Grand Comics Database has a guess that the artwork is by C.C. Beck. I am not sure, but believe it is more likely a product of C.C. Beck’s studio, drawn by diverse hands. It is from Captain Marvel Adventures #17 (1942). 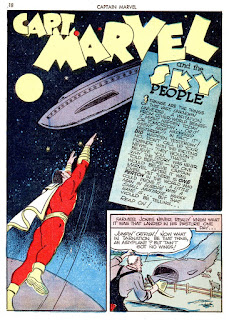 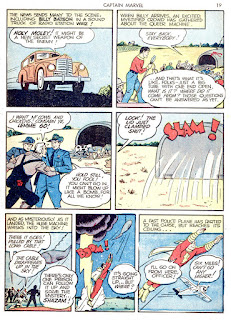 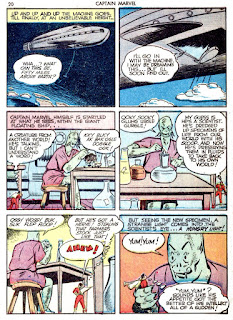 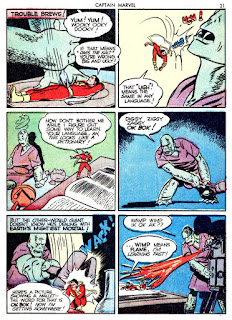 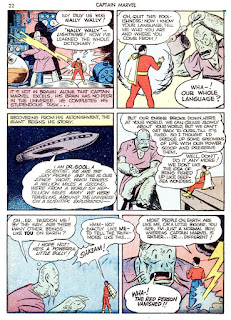 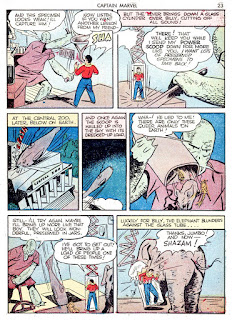 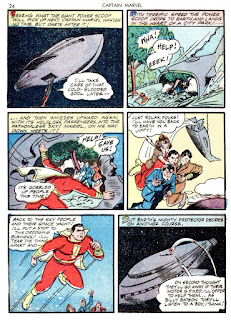 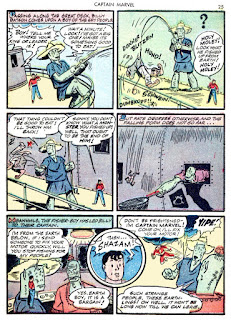 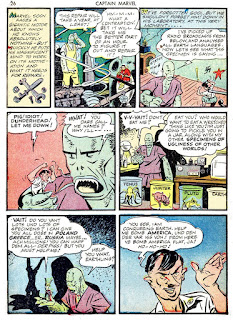 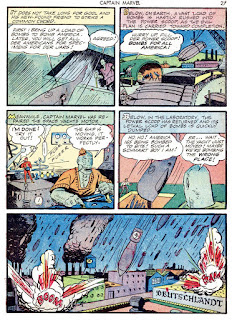 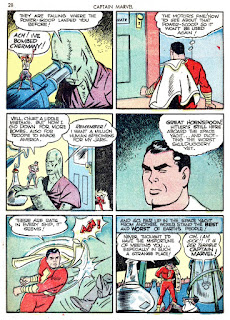 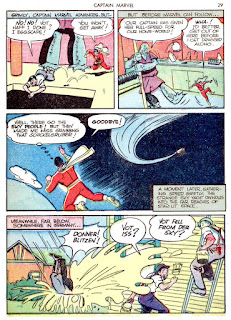 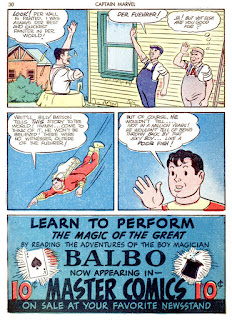 I admit that my exposure to Beck's art has been limited, but every bit of it that I've seen, some generated before this story, was considerably better.

The natural reading of 5:6 and of 6:1 is that Billy Batson refers to himself as something like an ordinary human being, and to Captain Marvel as his friend. By a magazine issue dated for November of 1942, Billy and Captain Marvel were regarded as distinct persons.

Also, those two panels represent the worst instance that I've seen of a Marvel effecting a transformation or transposition without good cause, simply to allow the writer to have the Marvel rendered helpless. But the whole story seems to have been casually generated. Captain Marvel allows mass murderers to escape, and Hitler is able to survive a fall from the edge of the thermosphere. A talking duck would not have been out-of-place.

And stop turning back into Billy! How many times has that gotten you in trouble? For somebody that can learn an entire alien language and repair ultra-advanced technology, he doesn't learn very many lessons!

Kirk, your "hilarious comment was succinct and to the point. Thanks!

Brian, yep, that's probably why Billy doesn't go to school. It's not that he's too busy being Captain Marvel, or an underage lad working for a radio station...maybe he just can't grasp the lessons.

Why didn't Billy just stay Captain Marvel is probably one of those questions like, "If God is all powerful, can he make a rock he himself cannot lift?"

Daniel, well said. Billy and Captain Marvel may well be distinct beings, but where does Captain Marvel go when he has not been taken over by Billy, and vice versa? When Billy is Billy he's obviously not in school (see my note to Brian).

If-and-when the writers realized what they'd done, they might have wanted to provide and to use a structure of explanation, but then even the ghost of the fantasy of a boy magically becoming a man would have been exorcised; and, additionally, Freddy and Mary would have gummed-up the works.