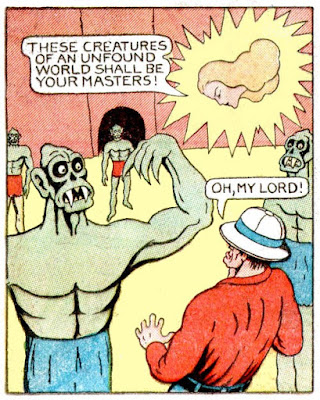 Here we go again into the mind of Fletcher Hanks, who had a vengeful view of good vs evil. And characters. And his artwork.

Four white men in pith helmets are forcing Africans to work for them in a diamond mine. Fantomah, who can do things such as turn her face into a skull, and fly, and wiggle her fingers and make magic, wreaks her vengeance on them. In an unusual story development (“unusual” is the key word) Fantomah puts all the white men into one body. Such weird doings are known to pop up in Hanks’s stories. Fantomah then banishes the four-in-one bad man to the place of jungle horrors. Horrors is right! Besides strange giant green men, there are white cobras, looking like sex-education diagrams of sperms heading for the egg. (Maybe it’s just my comic book mind seeing things in pictures.)

There was only one Fletcher Hanks, and he left comics (or was asked to leave) early on. I wonder what his work would have turned into had he kept on drawing comics. I can imagine 1950s horror comics by Hanks that were never to be. 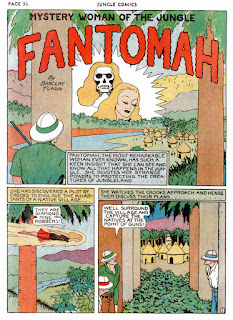 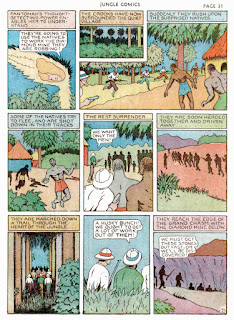 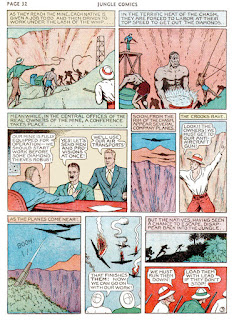 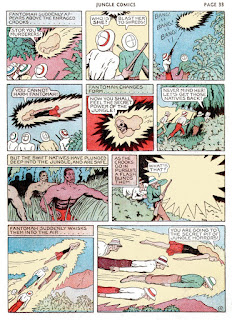 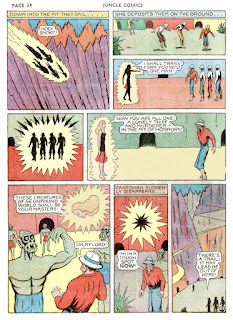 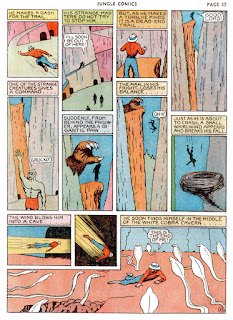 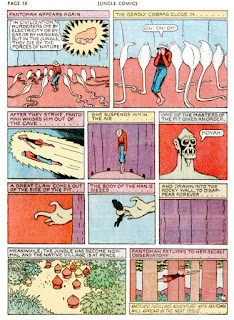 Note to self: If I see a flying woman who turns into a flying skull with nice hair surrounded by a sinister glow -- while threatening me with horror -- my next move should not be "forget her and get to killing these other guys!"

You know, the more I think about it, maybe Hanks was a genius artist? Maybe he was obsessed with the ugly? Sure, Fantomah is OK but he only drew her beautiful to make the ugliness around her more extreme.

He seems to have gone out of his way to make all characters ugly. Doesn't matter who they are. The bad guys, the poor natives, the mine owners ... all hideous man-monsters. I think Hanks knew better and was actually drawing that way intentionally.

Or he was just one bizarre artist/writer, but I like to go with the conspiracy theory!