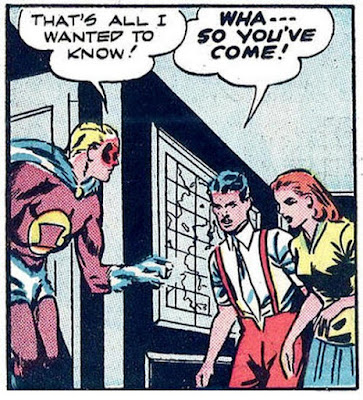 The Mad Hatter was a costumed hero, non-super powered, who appeared in two issues of a self-titled comic in late 1945, early 1946. He shared his comic with some kiddie characters, Danny the Demon and Freddy Firefly, which is to me an indication his first issue was thrown together with some existing inventory. (So thrown together that the cover promoted a story that didn’t show up until issue #2.)

Although the publisher in the indicia is listed as O.W. Comics Corp., there was some connection to EC Comics and Maxwell Gaines. Danny the Demon and Freddy Firefly also showed up in some early EC Comics. Whatever the connection it didn’t last long.

By the end of the war superheroes were going out of vogue, and the push was on to find new genres. Mad Hatter isn’t a bad character or comic...just more of a curiosity, created and put on the newsstands at the wrong time. Unless, if my theory of existing inventory is true, two issues may have been all that were intended to be published.

Writing is credited by the GCD to Bill Woolfolk, but artists listed in their credits included Mort Leav and John Giunta. The art for “A Date With the Mad Hatter” isn”t specifically credited. 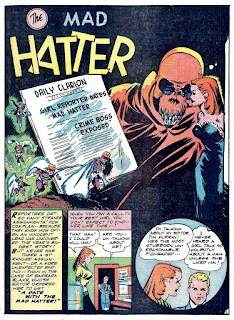 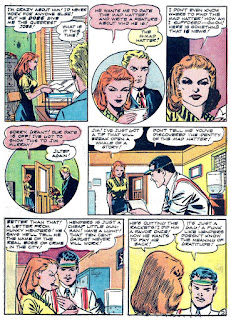 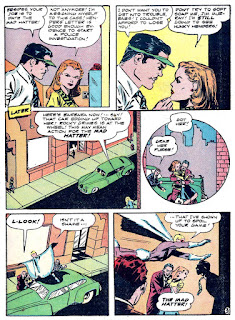 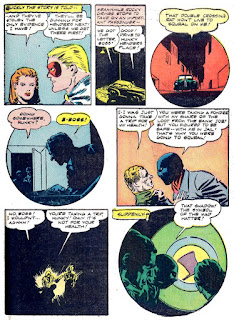 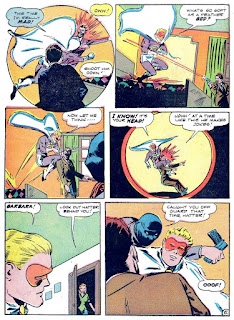 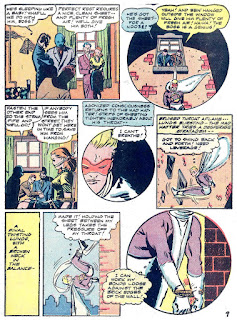 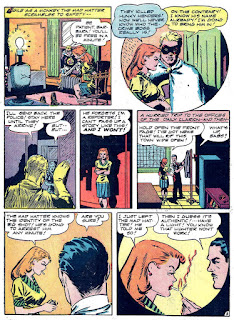 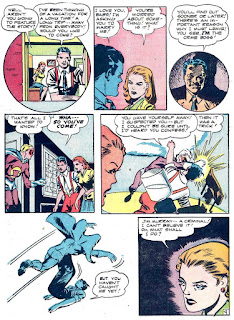 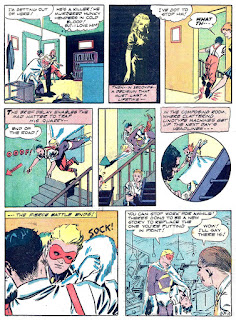 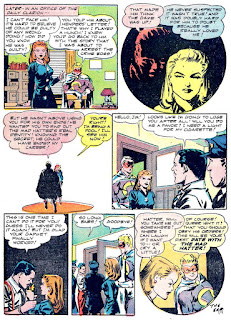 Another Mad Hatter story, this time from issue #2. Just click on the thumbnail. 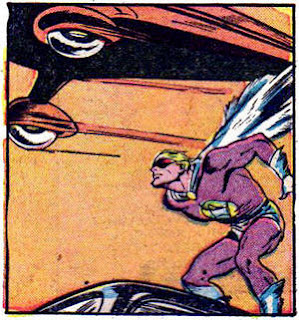 That story was beautifully drawn.

We have an interesting twist — to my mind an especially unpleasant twist — on the theme of la femme désirée not going for Our Hero. Barbara Blake (yet another beautiful woman reporter with an alliterative name!) is Our Hero's “best girl”, but she confesses her love for another man. Now, somewhat as in many of the “love” comics that we've previously seen here, she is shown by Mr Right that the man whom she loves is Mr Wrong, but in this case Wrong in a much bigger way than in those love stories.

I'm sure that rather a lot of young male readers found themselves in positions that they would have imagined as analogous to Grant's in 1:3–2:1 — not just as Clark Kent, but as a someone who has lost the object of desire to another man. (And, given his “Jilted again!”, this experience seems not to be new for him.) Perhaps even the Clark-Kent fantasy is somewhat about revenge (against the rejecting woman), but here the element of revenge (against the rival male) is more obvious.

Although, by the time that the stories went to print, the Mad Hatter may have been seen as unlikely to have a run of much length, surely when this story was written there were hopes for a longer run. Hence, while Mr Right gets to date the girl at the end of this story, the girl doesn't rush into Grant's arms, as she would in a “love” comic.

He doesn't even wear a hat!

Brad S., no, he did not, and it was a time when all men wore hats. Even men who didn't need to cover a bald spot.

Daniel, your wisdom in the workings of love and arrangements of couples speaks volumes, but your advice to walk away is easier said than done.

Yes, I would have been smarter to just turn and go when I found out I was a second choice...I hung around, hoping against hope, and then it took a major turn (i.e., my girlfriend announced she was marrying her first choice) before I finally gave up.

What I found after enough experience, though, is that getting dumped is not that bad. If there is trouble in courtship it will mean trouble in marriage. I learned it late, but at least I learned it. (The woman who dumped me for first choice is on her third husband, and I am still on my first wife.)

As far as I can see, the girl reporter pretty much disappears in issue 2.

I think Mad Hatter's an interesting character. The stories are odd, but not in a campy way. The dialogues are quite clever, the drawings have personality.

In the second issue there's a thug who is electrocuted, and whose vengeful brain is transplanted into a huge Gorilla's body. He wears a rubber mask (!) to look like a human (having seen its real face, the Mad Hatter thinks he wears a GORILLA mask!) and can snap your backbone with one hand .
Despite the silliness of all this, the character with its beastly fury, is impressive and quite scary.

If I had to make a guess after a quick comparison between the second issue and the story you posted, I'd say Giunta was the artist of "A date with mad hatter", but it's just my guess.
This Mad Hatter could be seen as a sort of well-intentioned Joker... or Riddler maybe. Could work well as a DC silver age comic.
I think there was a Batman's enemy called "Mad hatter".

Hmm.. I'm wrong. M.H. does NOT think that the villain wears a gorilla mask, but he also doesn't realize that he is the revived gangster.

J D, I think Giunta is a good guess as artist. If so, this is one of his better jobs.

The Jim Murray editor/crime boss character seemed likable to me. Pity he turned out as the dreaded crime boss. The drawing and writing of this story shows some quality. Pity it had to fit a boxer-shorts-over-the-leotards with cape and domino mask secret identity type crime fighter story. All these decades later probably any of the commentors here could have written a better story but that's hindsight and decades of cultural changes. Still, this story showed some interesting developments. Thanks.

If it helps, the GCD notes it was distributed by Fawcett.

Darci, yiiiii! That almost makes it worse, considering the characters that later ended up in early EC comics. Oh well...it was just business. Their reasons were their reasons, and probably not for me to try to reason why.