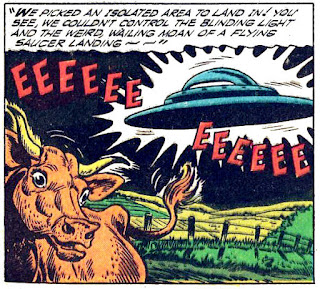 A strange delusion this story is, indeed! It is a delusion of a mental health professional accusing a supposed mental patient of lying, for one. Kick that guy out of  the American Medical Association! Even though he is shown to be correct in his accusation, I believe his bedside manner is sorely wanting.

I love old flying saucer stories, even if I'm not a true believer in UFO lore (I do not believe every light in the sky which cannot be readily explained is a vehicle carrying aliens from other planets, for instance). But the iconic images of the genre are irresistible to me, reminding me of those days of movies like Earth Vs the Flying Saucers or This Island Earth. When I saw those movies during their initial releases in theaters I thought they were out-of-this-world-cool!* This Island Earth, and its images of Metaluna, the devastated planet under bombardment, appears to have influenced a couple of panels of “Strange Delusion” from Adventures Into the Unknown #97 (1958). 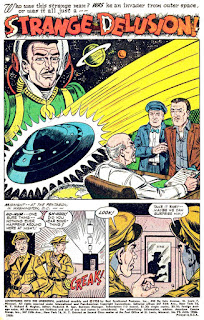 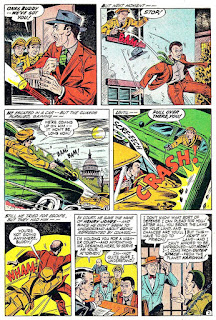 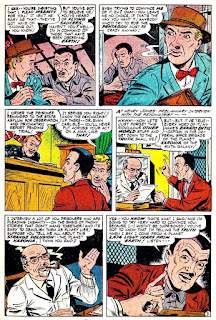 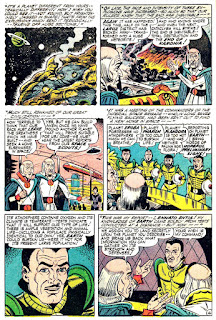 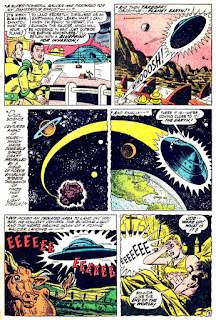 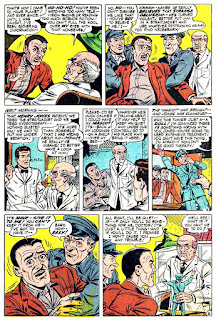 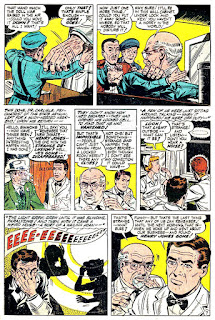 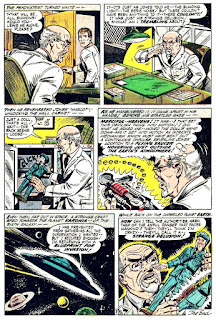 *As jaded as I am about everything, there are glimpses of my childish gosh-wow that show themselves now and then.

A past saucer posting, this one from 2012, has links to yet more UFOs! Just click on the thumbnail: 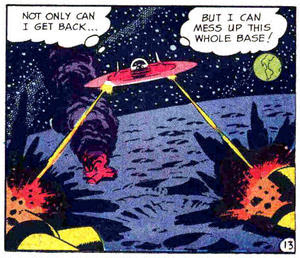 Email ThisBlogThis!Share to TwitterShare to FacebookShare to Pinterest
Labels: ACG Comics, Adventures Into the Unknown

The story ends on an ominous note, but it's not actually true; let's look at the actions of our supposedly top alien agent:

1. Goes on a spy mission without any advanced tech to get him out of trouble
2. His entire last ditch escape method involves a cop doll (what? why) and not something he might just have implanted in himself or always have the ship following him
3. He gives away HIS ENTIRE REASON FOR BEING THERE without being asked! He's the spearhead of an invasion! Shut up!

Technology or not, I don't think in 50s America would have a problem defeating these guys!

Brian, yes, but fiction is written by Earth people, and in fiction they always make Earth people smarter, so what happens when the real invasion starts, eh? We think "We'll lick these alien boogers in no time!" but we'll all be hiding in caves with no internet, TV or (OMG!) phones!

OMG Pappy me & Madeline (our opera singerer-- shes a human not a cartune butt we like her anyhow) got a new show on YouTube about UFOs & stuff. Its callded THE WINDOW AREA & soon we will have a video of a UFO outside Trump Tower in NYC yo OMG #SPOOKERY L8R 2nite we got a new DOGMAN video xoxoxo Hears our Failbook page w/photos of us We luv u Pappy Congrads on eleventy seven yrs of bloggery xoxoxoxo