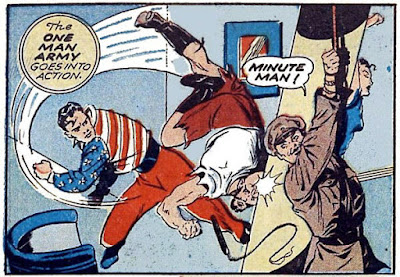 Looking through my files to find something that would represent the American patriotic holiday, Independence Day, we are celebrating today, I hit on Minute Man. Now, Minute Man, who is a WWII superhero, is not one of the “minutemen,” who were part of a militia, “ready at a minute’s notice,” formed during the American Revolutionary War. This Minute Man was a U.S. Army private named Jack Weston, who was not unlike Steve Rogers, another private who was Captain America. It’s obvious to me that stories such as these were written by people who had no concept of what being a private in basic training is like. In other words, Jack (and Steve) would have been too busy to be changing into costume and out fighting evil, foreign and domestic. Luckily the general was in-the-know about Jack’s sub rosa activities, and apparently covered for his absences.

Minute Man (sometimes spelled Minute-Man) was created by Charles Sultan, who has an American success story of his own. No credits are given by the Grand Comics Database for Minute Man #2 (1941), where this story appeared. 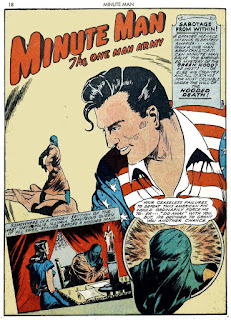 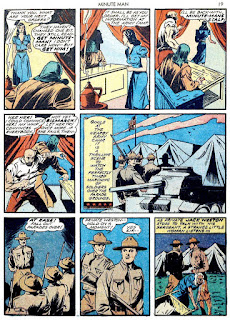 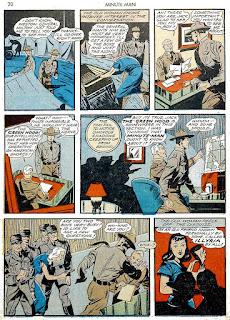 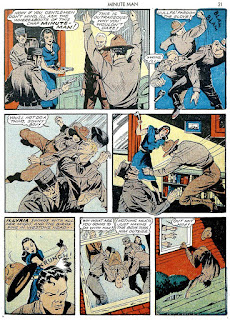 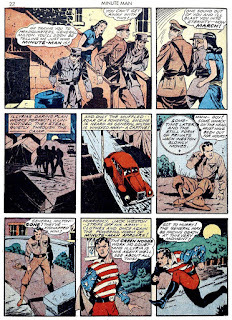 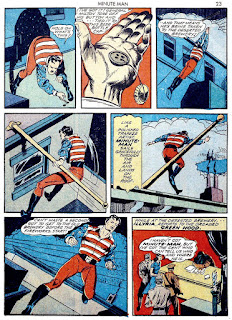 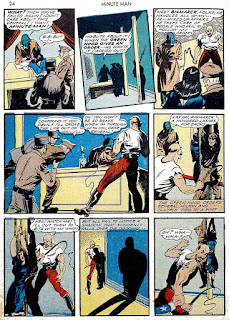 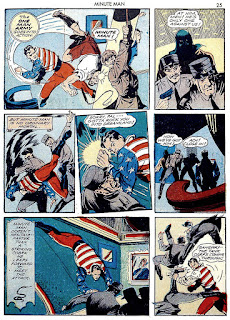 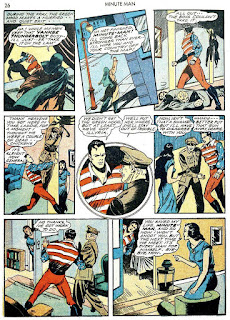 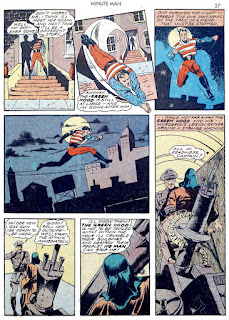 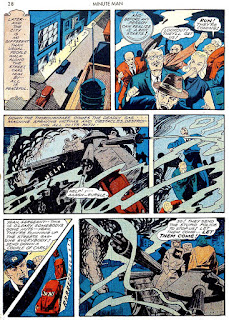 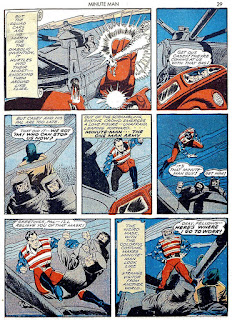 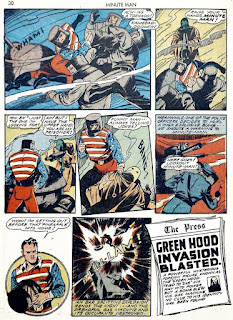 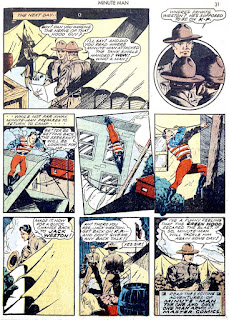 I think that more than one artist were at work here. Some of the drawing is very well done, while some of is not simply hurried but incompetent.

It doesn't seem as if anyone decided or much cared whether whether Minute Man had superpowers. In some panels he seems to fly; in others he's simple being athletic.

I briefly wondered whether the Nazis might arguably have worn their uniforms during their excursion in order to be protected by the Geneva Conventions. But, as the United States was pretending not to be at war with the German state, I don't think that the uniforms would have helped on that score.

It's completely implausible, of course, that General Milton could have torn-off a button and tied it to a beer-bottle cap after he had been taken prisoner by Illyria. So my suggestion is that he had the button tied to a cap already prepared against such an exigency. Of course, that leaves the question of how he would know whither he were being taken. Perhaps he just guessed.

IG Farben in fact discovered nerve agents at the end of '36. The German state chose not to unleash them in war for fear that the Allies had and would use the same or similar weapons if the Geneva Protocol on such things were breached.

Hi Pappy,
Nice to see Illyria again (after http://pappysgoldenage.blogspot.com/2014/08/number-1621-patriotic-hero.html ). It seemed we were going to see more of her stories after Master Comics #20, but I don't think that happened. Minute Man himself kept going until #49.
Thanks!

Daniel, your comment on nerve agents hit a...well, nerve. In 1968 when nerve gas killed 6,000 sheep in Utah we soldiers were put though yet another round of chemical, biological, and radiological (CBR) training. In my case, my fourth since being drafted in 1966. While we weren't exposed to nerve gas we were put into the "gas chamber" where we took off our gas masks, recited our name, rank and service number, and walked around the inside of the chamber(actually a shack) full of tear gas before exiting.

The idea of an army not having its weapons used against itself in retaliation is the same argument being used for not using torture to get (dubious) information. I don't know if there is logic to that or not. I abhor a use of torture, but it is true that many countries we have problems with use it routinely on their own population and would have no problems using it on an enemy, whether they thought it might be turned around on them or not.

Darci...you remembered a story I had completely forgotten about. Thanks for reminding me.