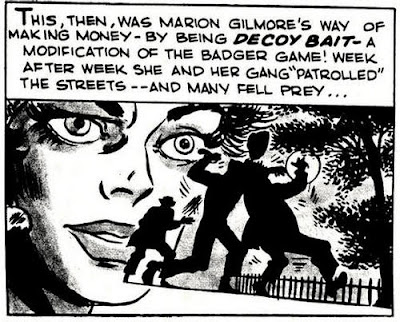 In 1971 Skywald Publications (a company founded by Sol Brodsky and Israel Waldman) published two issues of Crime Machine, which was a blackline reprint magazine of 1950’s crime comics, mostly from Avon.

Someone thought it was a good idea to introduce a host, Matt Grover, a “crime fighter and researcher into crimes and criminals of the past.” It required some paste-ups of Matt’s head in the splash panels of the stories. Perhaps the editor thought it would bring a touch of the present to stories of the past. Waldman, who had published the I.W. reprints line of comics sold through grocery and chain stores, had made his reputation with comics fans by reprinting old comic books, and when he co-launched Skywald he apparently had this sort of material lying around the office.

“Marion Gilmore” is drawn by Joe Kubert, and is a standard crime story of the era made special by Kubert’s dynamic artwork. Love that symbolic splash panel. (You got more of Joe’s artwork in the Pappy Tenth Anniversary Sunday post on July 3.) Marion’s story was originally published in Avon’s Parole Breakers #2 (1952). Did Gilmore really exist? Is this another example of a so-called true crime story? Did a girl luring men with an offer of sex, then having them mugged by her accomplices, move up to become crime queen of the San Francisco waterfronts? I don’t know. I don’t even care. Joe’s artwork is enough for me . 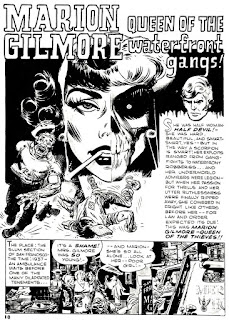 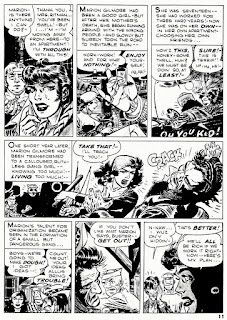 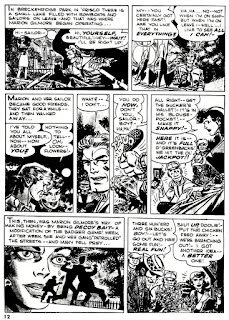 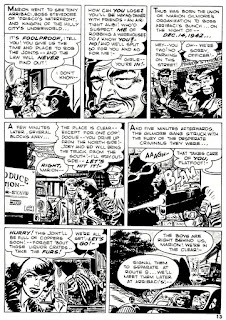 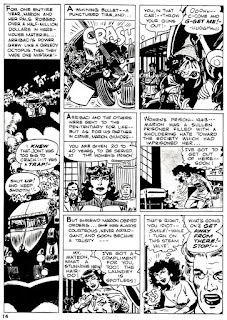 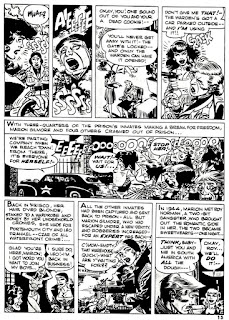 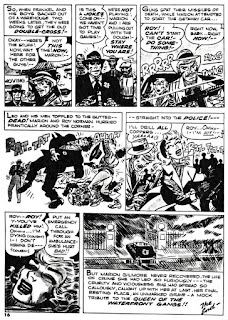 That splash image is very reminiscent of a famous cover image of one of the Avon editions of Chandler's The Big Sleep.

Skywald had a number of perhaps Warren styled (but more out there) titles in the first half of the 1970s. But they were driven out of business by the Walmart of comics,Marvel. They manipulated distribution and flooded the racks with their own series of black and white mags. Skywald titles either weren't displayed or were sent back. The same practice nearly ruined Warren too,though they held on a while. As soon as the damage was done,Marvel's black and white line folded up and disappeared. They only did it to destroy the competition. How's that for free market action?

Daniel, publishers learned long ago that images of sex and/or death sell. When it comes to images that capture attention, a skull is very potent, hence a skull and crossbones as warning on bottles of poison. I think Kubert used it very effectively in his splash panel.

Dale, I had heard that story before; in the version I read the publishers of Skywald were told by the distributor that despite good sales their books were being dropped because of the flood of Marvel black-and-white titles.

Obviously I have mixed feelings about that predatory form of competition, but it fit into the history of Marvel. If something sold they did five or ten of them and pushed everyone else off the newsstand. I recall wondering why DC didn't try the black-and-white market, but they probably knew what would happen if they did.

The people behind DC confronted an interesting problem with the larger, greyscale magazines. One the one hand, the DC brand had enough umpfh to take-on other publishers. On the other hand, beginning with the first wave of censorship, DC had been positioned as an ostensibly wholesome brand; and (setting aside the humor magazines) the larger, greyscale magazines were expected to present material that were more sexualized and grotesque or violent, so that the DC brand would have been damaged for wider application.

While I wouldn't deny that Marvel fought dirty, I don't see them as having sought to destroy a sector of the comic-book market, but as having tried and failed to get and hold a profitable share of that sector. That much, at least, would also have been what Skywald were doing. If Marvel couldn't make enough money to justify continuing, then it's unlikely (though not impossible) that Skywald could have done so had Marvel not entered. Amongst those magazines, Marvel abandoned most of its titles, including all but one of its horror titles, in the mid '70s; Tomb of Dracula continued into 1980. But Warren's Creepy, Eerie, and Vampirella lasted into early '83.

Daniel, I agree that DC had built a brand of "wholesome" comics under the Code, but the Code's rules were stretching in the '70s. DC put out some horror comics I think would have looked great in black line in a larger format. DC could have put out some magazine-sized publications and done well in the marketplace of the era, but for whatever reason chose not to.

And speaking of the Code, I remember reading (maybe first Creepy editor Russ Jones?) that Warren was worried about the Comics Code, which he claimed to be a very powerful organization at the time Creepy and Eerie came out. I wonder if he thought the Code would try to force him to join? Perhaps the Code didn't consider the magazine format to be a comic book.

Hi Pappy,
Tony Isabella writes quite often about the black-and-white Marvel magazines at his blog. He makes it sound like all of them survived only by the thinnest of margins, for as long as they did survive.
I think Martin Goodman's tactics were passé by the time the black-and-white magazines came out. Hadn't he sold Marvel to Perfect Film in 1968 and exited completely by 1972? In fact, IIRC they all appeared under the Curtis brand.
Thanks!

Darci, as for Martin Goodman's tactics of jamming up the marketplace with his own products, for that reason DC restricted him to six titles a month when they agreed to distribute his books in the late '50s. it was for that very reason. DC's agreement was in force right into the initial years of the "Marvel Age." I don't know if any of the business people thought it was still a tactic to capture the market by inundating it with product and forcing the competitors out, but whether deliberate or not it worked on Skywald.

Debbie, good catch! It oculd have been an inside joke by Kubert.