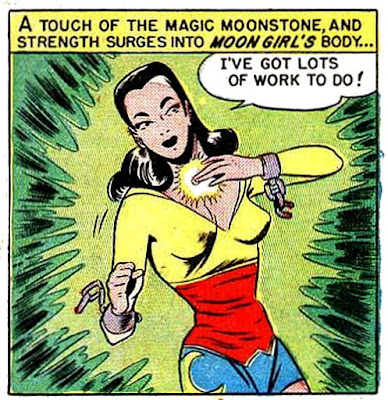 “Samarkand - The Capital of Tamerlane. Samarkand is situated in the valley of the river Zerafshan. It is the second largest city of Uzbekistan and is of the same age as the city of Babylon or Rome.”

No mention of a Moon Mountain or the Volcano Kokama, which are key plot elements in “The Spirit of Kokama,” from Moon Girl #3 (1948). There’s a rebellion going on in Samarkand, and Moon Girl’s mom is thrown into a dungeon. She didn’t detect the plot against her, but then I don’t think she is very smart. When the volcano erupts, she claims it is “harmless.” She sounds like a queen in denial.

Despite all of the things about mixing fantasy with real places, I am intrigued by Moon Girl’s plane. It isn’t invisible like Wonder Woman’s, but is controlled by Moon Girl’s moon powers. When it flies from Uzbekistan to America and shows up, unpiloted, to collect the Prince, it reminds me of a drone.

Artwork is by Sheldon Moldoff. 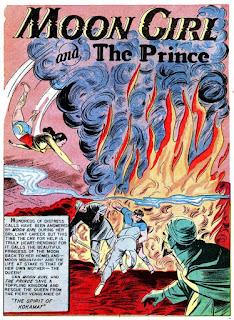 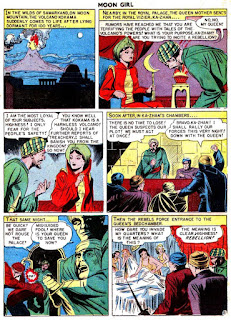 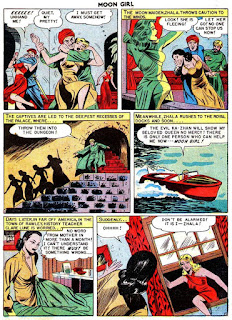 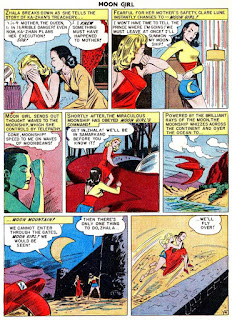 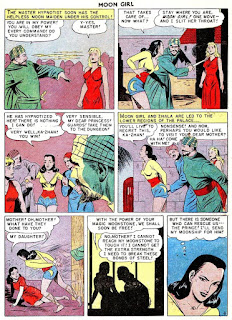 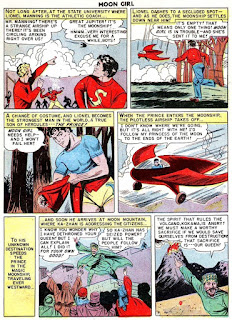 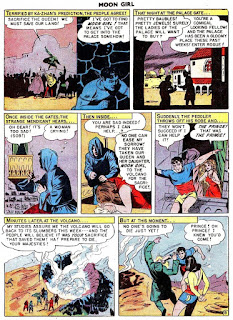 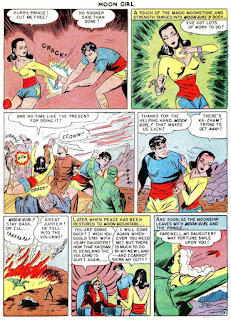 The first page has got to be one of the earliest super heroine brokeback poses (where you can see both butt and breasts at the same time, in case anybody wasn't familiar with that modern term.)

This story raises a number of questions: How did the original woman get all the way to America? Why did the conspirators wait that month before attempting to kill the queen? How do you by mistake fall into a volcano? Why didn't they just take the moon stone (might be a super power I'm not associated with.) Why didn't she immediately send the moon ship back for the Prince after she was originally dropped off? Are short-shorts part of her power set?

FWIW, the guided lettering here would have been by the same fellow (a former salesman for Keuffel & Esser) who had done the lettering for Wonder Woman.

The story here is quite weak, especially as the Prince, having learned that the Queen were to be sacrificed to the volcano, goes looking for her and then, uhm, learns that she has been taken to be sacrificed to the volcano. And the whole business of Moon Girl's surrendering to save Zhala's life, rather than saving three or more other lives (not counting her own) is questionable.

Perhaps there could be a battle between the Moonship and Birdie.

Brian, you have added a word to my vocabulary today. "Brokeback." Reminds me of the guy I saw on the Ripley documentary on PBS who could turn his head 180º!

As far as I'm concerned, short-shorts are part of a power set, because they can turn me into the guy who could turn his head 180º, especially when walking with Mrs Pappy while a cheeky young woman walks in the other direction.

At the time this story was published, and for a decade or more afterwards, short-shorts were frowned upon by moralists and considered risqué. All the more reason to like them!

Daniel, that would be Jim Wroten, who performed the lettering service for about $2.50 a page, if I remember correctly an interview with his widow I read a few years ago.

BTW, I don't like acronyms. It's because of that I coined one which describes myself as being OOI, "out of it."

Daniel economist and Brian have reasonable, good points to make about the story. Mine, if I may say, comes as Miss Moon Girl seems like an athletic type so why did she not extend her handcuffed arms below around the nice hips and buttocks, draw her legs up, pass her cuffed hands around her feet, reach up and put those magic lily-whites on that magic moonstone amulet? Just wondering. Maybe it was harder to draw all that than Mr. Prince arriving by magic plane. Nonetheless, it has charmed me to read the story and then the fun comments. Thanks, fellows!

I didn't know EC was using the ugly Leroy lettering that early...Was it that much cheaper? I think it's the worst part of EC Comics (besides Feldstein's extreme wordiness)

7f7, good point. She could've been out of there in no time. I suppose having the Prince show up is that old male thing about rescuing the damsel in distress. In Wonder Woman, which Maxwell Gaines published, creator William Moulton Marston thought that women were superior to men in all ways, so Wonder Woman's man, Steve Trevor, was more of a prop than a hero. Not so with the Prince, because Moon Girl was produced without Marston's beliefs.

Brad S., again with Wonder Woman...the Leroy lettering was used for that comic, and maybe Gaines thought it cheaper to use it than hire a letterer.

I always thought it was used in Feldstein's books because of his wordiness, that it was probably because they could squeeze more into the space allotted. Then I considered Charles Biro's magazines and saw stories just as wordy done with hand lettering. I'll bet that poor guy had cramps in his fingers after a day's work.