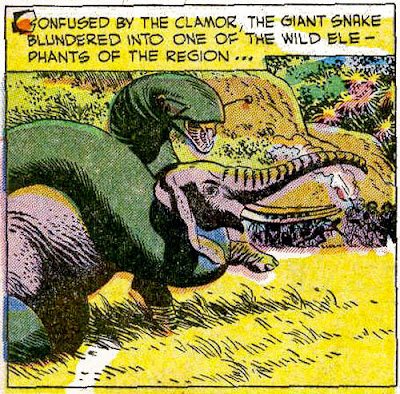 Alex Toth and Sy Barry drew “Artist of Other Worlds!” for Strange Adventures #13 (1951). Typical of comic books at that time the artists got no credit, but in an unusual turn, the writers did...at least in the early issues of the science fiction comics edited by Julius Schwartz. Edmond Hamilton is bylined as the author.

Hamilton had a long history of writing science fiction for pulp magazines. His first published story was published in Weird Tales in 1926,* and he remained popular with readers for his entire 50-year career. He went into comics when the pulp markets were drying up in the 1940s. (See the short article below the story, with quotes from Hamilton about his history with DC Comics.)

Hamilton, who had written Captain Future stories in the early forties, was invited into comic books after pulp editors Mort Weisinger, Jack Schiff and Julius Schwartz moved from the pulps to the comic books. Comics seemed a natural for science fiction writers (Otto “Eando” Binder is another example), especially someone who had a reputation for writing stories about heroes who did extraordinary things. That was Hamilton’s history, and it made him a natural for comic books. 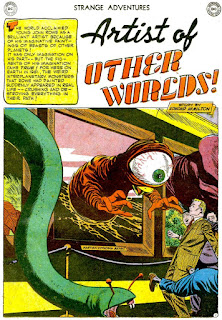 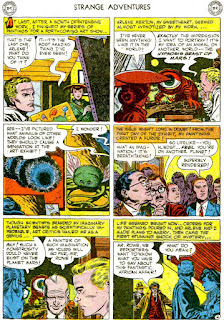 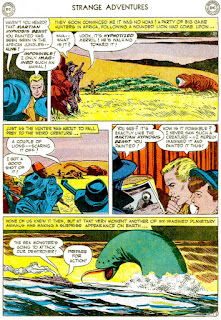 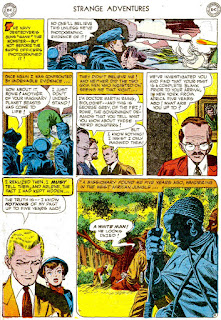 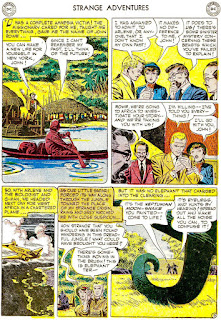 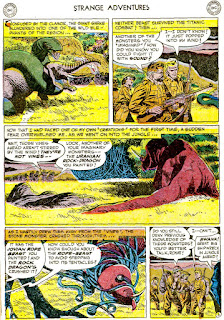 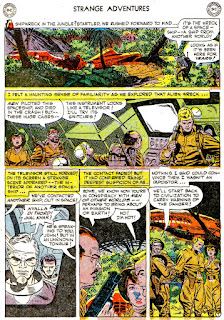 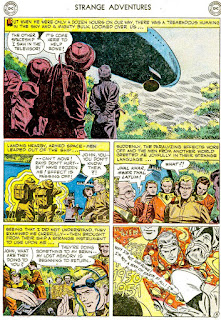 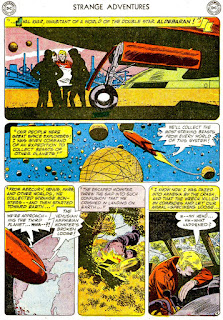 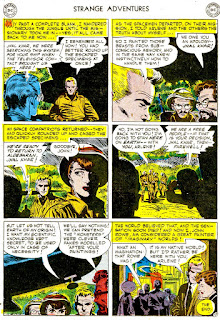 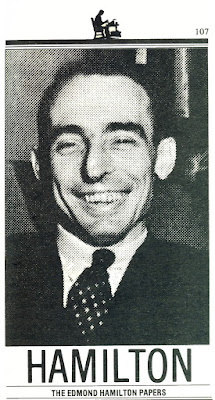 “Fifty Years of Heroes” is an autobiographical piece written by Edmond Hamilton in 1976, and published  in Byron Preiss’s anthology series, Weird Heroes Volume 6. It went to press just after Hamilton’s death in early 1977. In the article Hamilton gives an entertaining view of his long career writing science fiction (including when he was known to fans as World-Saver Hamilton), and a brief history of his 20 years writing comic books. To quote the article:

“In 1946 I heard again from Mort Weisinger. He had returned from his war service to take up his job again at National Comics Publications, as DC Comics were known at the time. He and Jack Schiff had left Standard Magazines in 1941 to work in the comics field, and later on Julie Schwartz had joined them at DC.

“Mort wanted me to write comic scripts for DC magazines, to start with Batman. I had some doubts at first, as the format was quite different from fiction stories. In those days after the war, the pulp magazine market was very poor . . . I had to write a few very poor scripts before I began to catch on to the ways of comic writing.

“For the first year or two, all my scripts for DC were Batman stories. Mort and Jack Schiff were the nicest guys in the world to work for, but they took their work seriously, and if I made a stupid error or scuffed over anything, they told me so at once, and loudly.

“After a year or two I started to do Superman stories, also. I think I did better on Superman than Batman, simply because it was more science-fictional.

“Julius Schwartz first edited the science fiction magazines at DC — Strange Adventures, Mystery in Space. . . I did a good many sf stories for those, and when I started doing them I thought, “This will be a breeze . . . writing for an old pal like Julie will be no trouble.” I was wrong! Friendship cut no ties when Julie read a story, and he was as strict with me as with anyone else. I guess that’s why he became one of the greatest editors in the business.

“I wrote for DC Comics from 1946 to 1966. During that time, I was still writing science fiction and produced a good many sf books and magazine stories. When I resigned from comic work in 1966, it was only because Leigh [Hamilton’s wife, author and screenwriter Leigh Brackett] and I were about to go on some long-deferred world travels — to Egypt, India, and so on — and I would not be able to fill any schedules. But I always enjoyed working for the hero comics, particularly for such a great bunch of guys.”

That was a nice piece, with great Alex Toth art, although the mystery's solution was pretty obvious early on. I only wish I knew what that blue-suited guy is doing in the opening splash panel.

Elsewhere I have read that Hamilton were called “World Wrecker Hamilton”. But, while he wrote of events on a huge scale, I think that there were more saving than wrecking.

I'm not exactly sure when I started reading Captain Future stories, in mass-market paperbacks, but I'd guess that it were when I were about ten years old. Curt Newton became an important model for my idea of what a man ought to be. (A female friend, in her early thirties, recently remarked “Geez! You are Buzz Lightyear!” I guess that he's the reference closest to Curt that most younger people have.)

By the time that I was reading those paperbacks, Hamilton had already withdrawn from writing for comic books, but I recognized his name when he was credited in reprints. I thought that his stories were generally better than most of those by whomever else were writing in that era.

In “Artist of Other Worlds”, suspension of disbelief might be required to imagine that a science-fiction artist would be given great respect by the general public in 1951. I remember a time when a critic within the speculative-fiction community sneered at Frazetta's asking a few hundred dollars for some of his original paintings.

Some of that is charming. To such kids, it would seemnatural that the artists whose work most strongly affected them would be widely admired. While they might imagine that there would be strange sentient life out there, they'd expect what amounted to H. sapiens on other worlds; and, though they might not expect that they'd fall in love with a girl from a world 65 light-years distant, they would expect that, if they did, then they'd marry her. (Amor omnia vincit.)

One aspect of the conformance to expectations is quite unfortunate. The people of other worlds who were imagined to be very like H. sapiens were generally imagined to resemble Caucasians more than they did other people of this planet — especially if love were in the air. (And DC was then publishing in a era in which not only was inter-racial romance widely abhorred, but inter-racial marriage was rejected in some jurisdictions of the United States.)

I'm sure that Hamilton understood the problem of the physics of large animals, but disregarded it because the story needed creatures of the same sort as his readers would themselves imagine as dangerous beasts from other planets.

I realize that, after the first wave of comic-book condemnation and censorship, DC generally sought to publish unobjectionable stories, and the general lack of fatalities in this story is largely an artefact of that. But, when I was first reading these sorts of stories, I didn't want seemingly innocent people hurt. So I'd want the hypnosis beast to be chased-away by lions, the sea serpent to be repelled without loss of crew, and so forth. (I would have felt sorry for that elephant!) I suspect that a large share of readers in 1951 felt much the same way.

Nothing against Hamilton, but that's a very convenient set of things happening in that script. It's really driven by the twist than by character building, but it's perfect for comics and gives Toth a ton of cool stuff to draw. A lot of sci-fi suffers from twist first, plot later.

I love how, in a lot of DC sci-fi stories, everybody just agrees to stuff so the story can wrap up ("I'm staying here, don't tell anybody about all the technology I have that could save millions of lives." "Sure thing, buddy!")

Now I want to watch the Herculoids!

Daniel, those caucasian human-like aliens of science fiction are represented in UFO literature, sometimes as "Nordics" from the Pleiades. They are often portrayed as benevolent, looking out for humankind with concern, and warning of other alien species such as the "grays" or "reptilians." The first time I encountered this was in the early '60s when I read Flying Saucers Have Landed by George Adamski. He claimed he talked to such a Nordic-looking being on the side of a road in California. Adamski's tale seemed suspiciously like the story of Joseph Smith meeting an angel (represented as a caucasian by the Latter-day Saints church) in a grove in upstate New York circa 1830. I assume all of these stories are an offshoot of fiction where the white guys are the good guys and the villains are non-whites.

I have a couple of those Captain Future paperbacks on my bookshelves, and remember reading several of them when off-duty while in the Army. I enjoyed them at the time, but I recall within the past few years reading a few pages of one and closing the book. I guess I have moved on.

In page two, there's a joke about suspension of disbelief, when the scientist says that "no such creatures could ever actually exist on Mars".
At the end of the story, turns out they actually can (and in Earth's atmosphere, too). Hah hah.

"Julie" Schwartz? Is it a common nickname for Julius?

Brian, we know that Hamilton wrote to formulas; the DC editors would discuss the story and the gimmicks with the writer and he would write it to their specs. In that way no matter which editor he was working for, the stories sounded right for that editor, including this Julius Schwartz-edited story.

Science fiction used to have those stories where some "learned scientists" would tell the world some terrible fate would occur and everyone would join together and work for a solution. In real life even those learned scientists can't convince a lot of people of anything. On the other hand, they might be denying glacier melting and sea levels rising, but in their minds they have all kinds of beliefs in conspiracy theories or religions that defy any kind of logic at all.

J D, I don't know if "Julie" is a common nickname for Julius; except for Schwartz, I have never known anyone named Julius. In Schwartz's case I think it is an affectionate name used by his friends, and then passed along to comics fans who liked what he did with his comic books.

Julie is more common as a woman's name, and I knew a few of them.

I've encountered a few cases of fellows named “Julius” who were nicknamed “Julie”. Examples include John Garfield (né “Jacob Julius Garfinkle”) and Julius J. Epstein. But I'm pretty much in the same boat as you, Pappy; if any of my friends or acquaintances were named “Julius”, they concealed that fact.