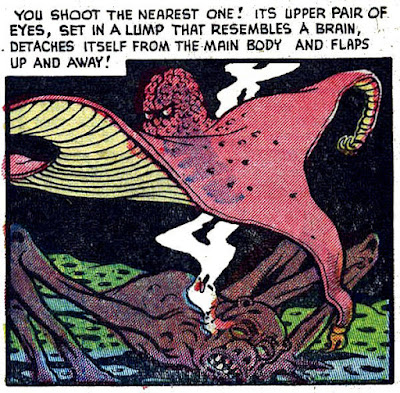 I am in the mood for classic horror, a Basil Wolverton tale. It has been reprinted several times, but if you haven’t seen it, you might be surprised that the same artist who could draw the hilarious Powerhouse Pepper, Bing Bang Buster, et al., could also be one of the best pre-Code horror comics artists.

“The Brain Bats of Venus,” which I saw for the first time over 50 years ago, gives me a chill. It is the look of that thing on the astronaut’s head. Cosplayers take note: you’d look splendid at the next comic con if you made one of the brain bats out of papier mâché and perched it on your head. Yow!

These are scans from the original printing in Mister Mystery #7 (1952). 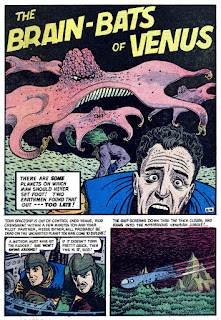 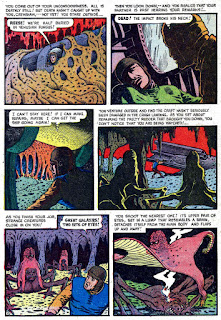 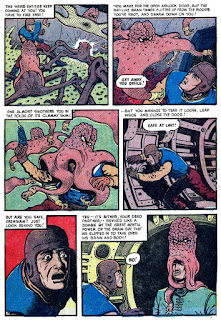 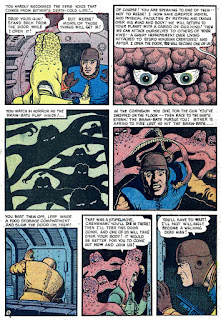 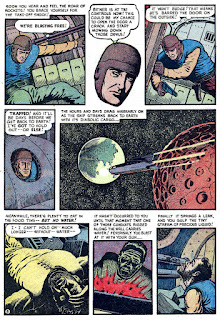 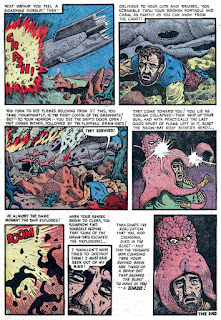 Click on the thumbnail, read a funny Wolverton Powerhouse Pepper story, and another classic horror story, “They Crawl by Night!” featuring the CRABMEN! 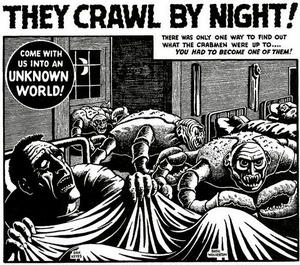 Wonder what Basil ate before conceiving his creatures!
Brain Bats. I got the Eclipse recolored reprint, but have to admit this is not bad at all.

Yes, as I said somewhere, he was definitely a two-sided artist. Both "sides" were mighty good, though.

Papier mâché could work, but I suggest silicone. It would be a more involved process, first of creating a pattern, then a mold, and then casting. But silicone will cure at room temperature. (Use a well ventilated area!) And the result would (appropriately) be more disturbing.

The horror fiction from Wolverton that I've seen is characterized by the triumph of Hellish creatures over people who seem to range from ordinary to heroic. Wolverton was a deeply religious man, yet these stories offer no justice, unlike (for example) the typical horror story from EC. I think that the explanation is that the EC stories imply that an impersonal universe somehow dispenses justice, whereas Wolverton believed that the present ruler of the world was Lucifer. His characters implicitly fail to call upon G_d, and so damnation is visited upon them, as upon most of mankind.

Wonder if this inspired the headcrabs in the "Half-Life" game?

Thanks! Any time is the right time for Basil Wolverton. "Brain Bats of Venus" is just down right creepy, but "They Crawl By Night" is my favorite of his horror stories.

Daniel, I had not tied his religious philosophy with either Wolverton's humor or horror, but perhaps we could look at the horror comics as signifying a belief of his that evil can attack and destroy even the most innocent people with no intercession from God. Maybe he was thinking of the crimes against humanity by both the Nazis and of the Soviet regime.

Your comment on EC horror, an impersonal universe somehow dispenses justice," reminds me of a comment I read in the sixties or seventies, wondering why parents got so upset over those stories when they were teaching in effect that if you commit a criminal act you will be directly punished. Crime not only did not pay in the EC universe, victims crawled back out of the grave and got their killer.

Since I don't go to comic conventions I don't see cosplay except in photos, but some of the creators of costumes go to incredible lengths and are exceptionally talented. I'm sure someone could figure out how best to create the Brain Bats and mount them to their heads and shoulders. If they do I hope they'll send me pictures.

J D, I wonder if there was something jokey about the Crab Men. Crab lice are those nasty little things that can be transmitted sexually and are hard to get rid of, living on toilets, for instance.

When I was in the Army crab lice were called the "Armored Cavalry." The First Sergeant might say in morning formation, "Avoid the latrine this morning. The Armored Cav is out." We all knew what that meant.

Maybe it is just my dirty little mind. It was my first thought on seeing the Wolverton story.

bzak and rnigma, thanks for the comments. Always glad to hear from you guys.

Brian Bolland once did a Justice League cover depicting human faces covered by malevolent starfish (the villain was Starro the Conqueror), which seemed to be inspired by the face-hugger in Alien. It's possible that both examples can be traced back to Wolverton.

I wonder if Robert Heinlein got the idea for his novel "The Puppet Masters" from this story.

First saw Wolverton's stuff as a kid in early 70s issues of "Plop!".... I would stare at his art for hours as a child. Devoured the 80s Eclipse reprints in my teens. He's definitely one of comics' greatest all-time visionaries.

It is extremely unlikely that Heinlein got the idea for story first published in 1951 from a 1952 comic book.

In the 1990's I studied photography under the tutalage of the marvelous Johnathan Miles. He had many a story to tell. One of his favourite films was "le jetee" , a cult french sci-fi movie made from stills rather than moving pictures. That film is often quoted as being the inspiration behind "12 monkeys". John had himself made a film along similar lines about an astronaut that catches a nasty alien infection and he said he had shown the movie to Ridley Scott. Who of course went away and produced "Alien". I don't know if John was just fooling around but he complained that Scott had nicked his idea. But then "Alien" is in part a remake of "It! The terror from beyond space" and "The quatermass experiment.". And, if anyone has seen it, there is a comic book adaption of "Alien" by Mobius that doesn't include any of the HR Giger charecters at all, with completly different monsters. So, I guess no-one nicked anyones ideas and they all did at the same time! Jungian archetypes!

thanks for sharing this comic, I love it!

Benpeter, thanks for your comment. I remember Le Jetee well.

Alien was also lifted from "Dark Destroyer" by A. E. van Vogt, published in 1939. Van Vogt sued, and got an out-of-court settlement from the filmmakers. The idea of carrying back a malevolent entity from another planet is one of those ideas that seem to be out in the air, waiting to be plucked by a writer or filmmaker, but the details were similar enough to van Vogt's original (or so he felt) that he got paid for it. And good for him.