Number 1855: “The dust of centuries chokes my throat!” 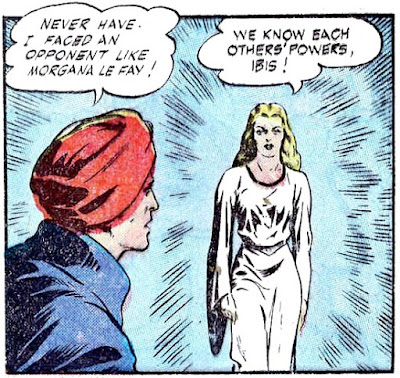 Morgana Le Fay, half-sister of King Arthur, hatches a plot to steal the throne. She uses a disgruntled knight, Sir Hector, a plug-ugly with a Prince Valiant hairdo, as her henchman. While Sir Hector fails in his primary responsibility (kill the king, steal his sword, Excalibur). Morgana, however, trusting Sir Hector won’t fail her twice, gives him immortality in his shield, and expects him to bring her back to life sometime in the future.

It more or less mirrors Ibis, who was brought back to life 4,000 years after his death in ancient Egypt, and who in turn brought back his sweetie, Taia. But of course Ibis and Taia are the good guys and Morgana and Hector the bad guys. We can all figure who wins in this, the lead story from Fawcett’s Ibis #4 (1946), well drawn by artist Gus Ricca. 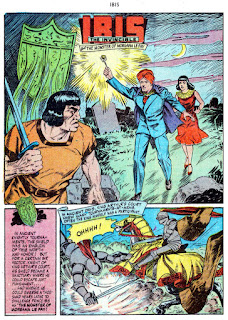 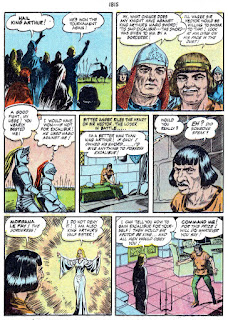 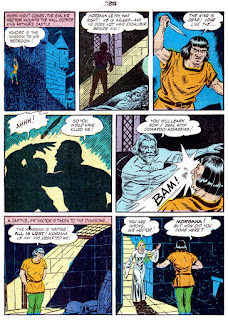 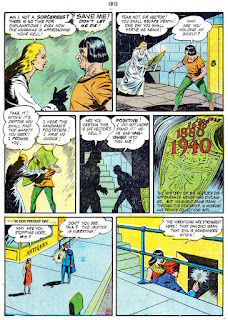 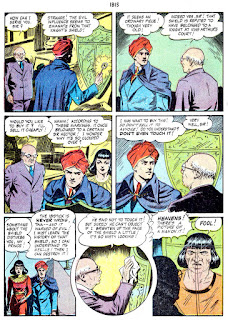 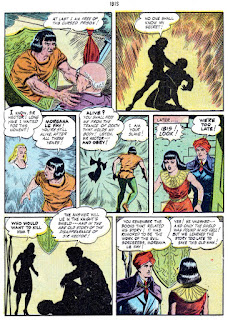 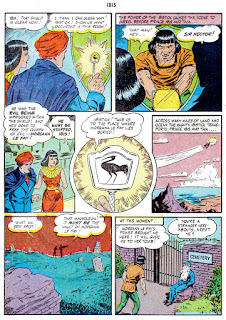 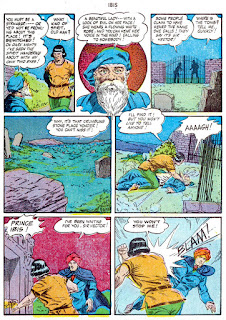 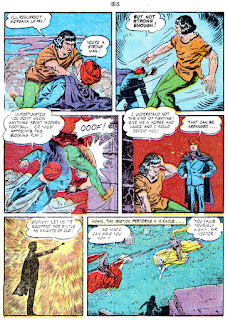 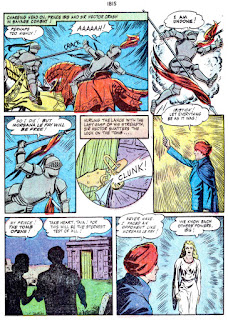 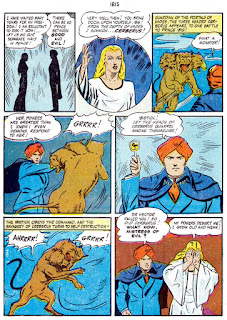 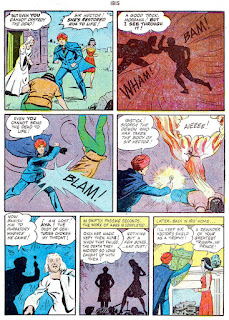 The essential idea for the story is a good one, especially as it does (just as you note) involve a parallel.


But the scripting here is very weak, and the art, while having a sort of polish, is rather stiff, without drama. Further, it was a grave mistake to depict the scene in the cemetary as if it were daytime.

Hi Pap-
I lived in an orphanage for a couple of years in the late 1940s. We often played comic book heroes in the early evening. I often chose my favorite hero, Prince Ibis; a girl named Geraldine (if memory serves) was Taia. My second choice was Bulletman, for a change of pace.
Thanks for all you post. It's one of the things which keep me young.

I've discovered Gus Ricca only recently ( I was attracted by the great covers he did for "Dynamic comics"). He's an interesting artist.
As far as I can see, in" Yankee Boy" he began to draw exceedingly ugly, deformed villains, in a vein similar to Chester Gould's Dick Tracy perhaps. Unfortunately, he was not that good. He also tried little experiments in page composition:

(the same scene divided into two different panels, so it's more "dynamic". How do you call it, "split panel" maybe?)

J D, I can think of no good reason the panels should have been arranged that way. It seems like an unnecessary affectation by the artist, done to be clever or "tricky," yet distracting from the story flow. Here is another one at the bottom of this page: http://comicbookplus.com/?dlid=40362

John on tha Sunset Coast that was a luvly comment, I dunno Y Pappy ignored u :( We luv that story! xoxoxoxo

Alicia, it could be I just had not gotten to John on the Sunset Coast's comment.

I want to say to John that it his comment that the blog is one of the things that keep him young, that makes it worth doing.

Alicia, you have a great day now, y'hear?

Alicia, thank you for your support of my reminiscence of my 8 year old self. I think it nice that another reader appreciates it. Please don't beat up on Pap, though; his putting this blog together is good enough for me.