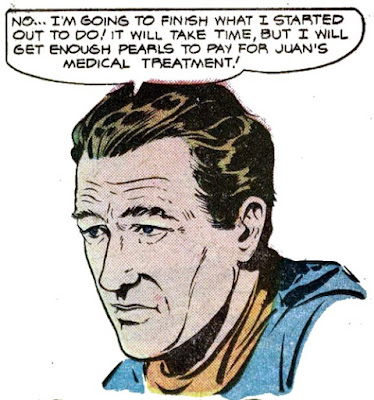 John Wayne is a really nice guy! At least he is in this story from John Wayne Adventure Comics #10 (1951).  Wayne witnesses an accident. Juan, a young Mexican boy, suffers a badly broken leg.The boy and his family, described by the local priest as “desperately poor,” have no money for an operation to repair the leg. so Duke Wayne, bless 'im, risks his own life to pluck a huge black pearl from the seabed to pay for the needed health care. What a guy.

We are left with a warm feeling for movie star Wayne, a grand and friendly fellow. Oops. But wait. Looking at the cover of the comic book, we see John Wayne’s right hand, and Wayne appears to be giving us the well-known obscene gesture — the infamous finger! We relax again, though, when we tell ourselves he is not flipping it at us, but more likely aiming it at the movie studio still photographer, who may have just informed Duke he would be holding up the rather large man for another few minutes while the photographer finished. The stunt man laying across Wayne’s broad shoulders looks dern near big as Wayne himself, who topped out at a few inches over 6 feet. They don’t call a movie villain a “heavy” for nothin'.

Artist and writer uncredited by the Grand Comics Database. 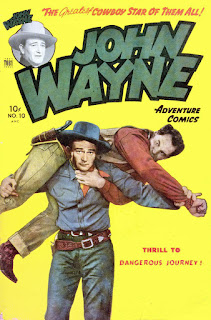 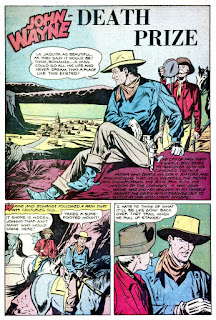 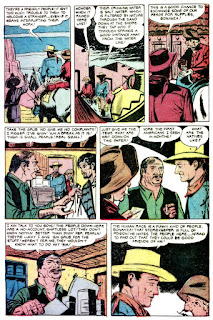 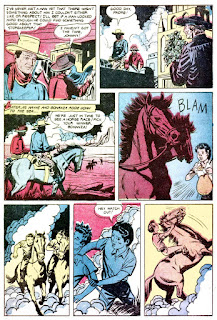 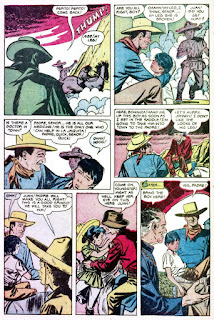 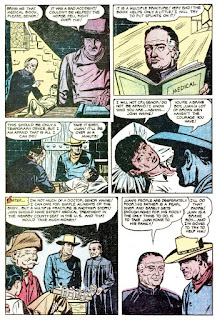 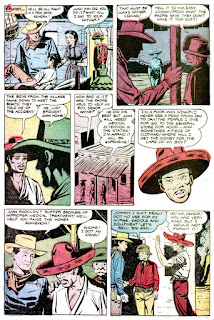 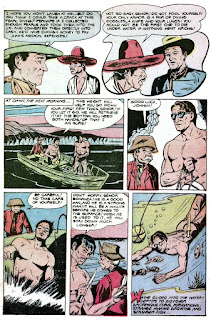 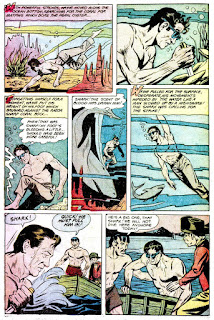 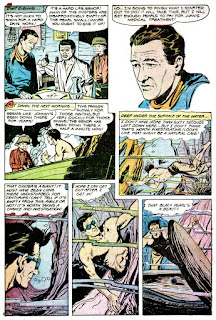 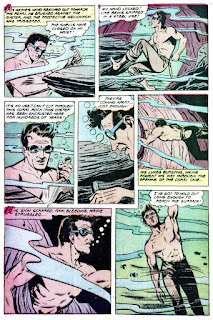 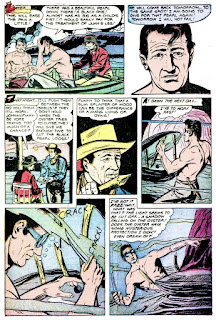 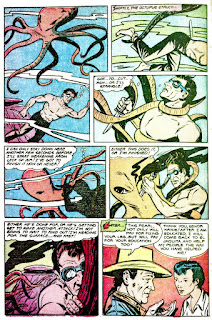 *sigh* A product of its time. Maybe Wayne should have burst forth with the cry of the Tarmangani as he surfaced with the pearl.

The story seems carelessly thrown together. La Jaquita (a community with a nonsense name) is proximate to a body of water connected to an ocean, but somehow there are barriers to travel so that the local store has a complementary monopsony and monopoly. Yet those barriers to travel don't seem to preclude it being best to cart Juan to where expert medical treatment may be found.

(I can imagine that an X-ray might be thought helpful; but, for the most part, expert medical treatment would have involved getting the bones properly set and then putting the leg into a cast.)

One of the archive collections I'd love to see is the ton of John Wayne Comics drawn by Al Williamson and Frank Frazetta. This art ain't them, but it looks as if the artist used their work as reference on Wayne's face in some of those profiles especially. Look at how delicate the linework is compared to the other characters.

Odd little tale. Since it's got Western trappings, I really would've expected there to be human obstacles to the hero's goal--other divers who found out about the big oyster or bandits who try to get the giant pearl away from "Johnny." Instead, we get natural "enemies"--a shark, an octopus, the oyster itself, and even Wayne's own body which can't stay submerged indefinitely--that would fit better in some old Disney live-action film. The suspense was rather, well...watered down.

I read Wayne's dialogue in the actor's own voice, and some of it sounded pretty silly--the explanation about the filtered salt water and "Juan shouldn't suffer because of improper medical treatment" just don't sound right coming from the Duke. Oh, and a more general dialogue issue: Has anyone ever actually thought the word "agh"? In comics, people are always thinking things like "gasp," and they even s-stutter in th-their th-thoughts and...think...in...ellipses. Sigh.

You know who was arguably as big a movie star as Wayne in the early 50s? James Stewart. Why didn't he ever get a comic book? Considering his film oeuvre was more diverse than the Duke's, I bet they could've done a lot with his title.

I don't blame him for flipping the bird on that cover... that is, if that's the Duke at all; it looks like someone pasted Wayne's face on someone else's body.

rnigma, you may be right. Even in those pre-Photoshop days such trickery was done. Good catch.

Ryan, well, I actually think the word "agh." Also "argh." I think in comic book thought balloons. And when I speak (in speech balloons) I don't make a dismissive style of noise that is indicated by the word "scoff," but I actually say "scoff." I also say "snort" rather than blow through my nose. My thought and speech patterns have been formed by over 60 years of reading comics. Maybe I should teach a comic books as a second language course.

It could be there was no James Stewart comic book because he and his agent would not allow it. I'm sure if any publisher thought they could use him in a comic book they would have been dangling money at him. I think the only time Stewart appeared in any comics would be in comic book adaptations of some of his movies.

Russ, I will try to work in a Williamson/Frazetta John Wayne story at some time. There could be a problem putting out a book of them, though, if Wayne's estate objected or if a publisher felt there wasn't a big enough market.

It may not be Al or Frank's work, but at least the artist managed to nail the Duke's likeness - unlike this story featured in the Stupid Comics blog, where Wayne at times looks somewhat like William Bendix:
http://www.misterkitty.org/extras/stupidcovers/stupidcomics291.html

rnigma, I am suddenly seized by a vision of William Bendix dressed like John Wayne, and doing Duke's vocal inflections! What a revoltin' development!

7f7, and while saying that I wonder if you have the same problem I do...when talking to my wife and escorting her through the door of a restaurant, for instance, I have to be aware that my speech balloons need to be pulled down so they do not bump into the doorframe.