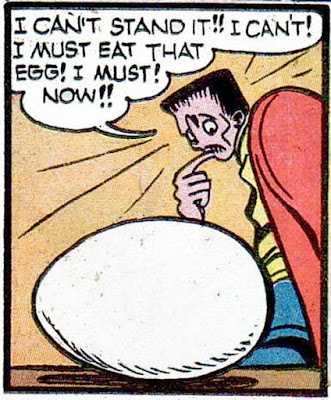 There is a “Gertie the Dinosaur” vibe to this story by Dick Briefer, from Frankenstein #5 (1946). I would not be surprised if that famous animated feature was a springboard for the Briefer story. “Gertie,” made by artist Winsor McCay (“Little Nemo in Slumberland”) had been popular in the early days of motion pictures. The first time I saw anything of “Gertie” was on the old Disneyland program of the 1950s, and I was fascinated by the stories of it being drawn frame by frame, over 10,000 drawings, to make the animation. To me, the definition of labor intensive.

You can see the McCay cartoon (featuring McCay and another well-known cartoonist of the era, George McManus, in a wrap-around to the animation) below. 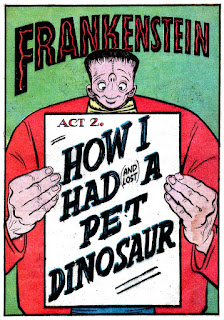 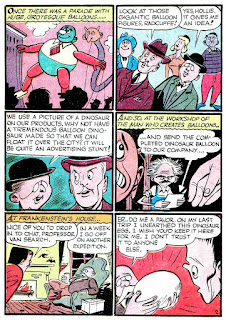 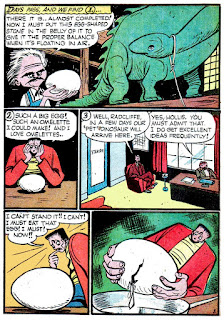 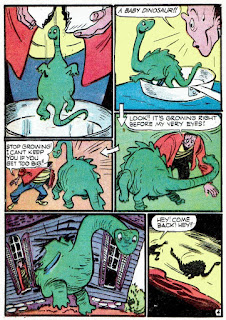 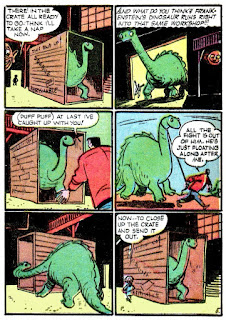 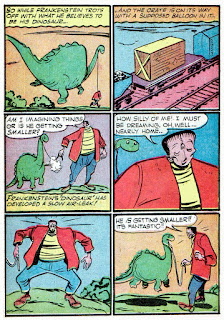 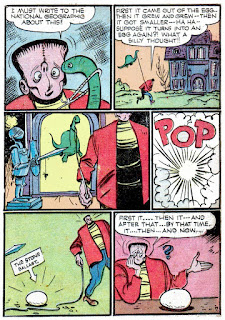 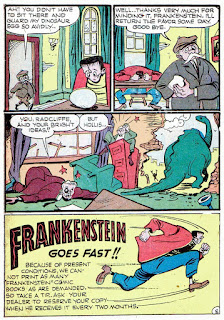 An interesting story idea, though I'm disappointed that the Monster would attempt to destroy something entrusted to his care, and that Professor van Search lost his egg. (Briefer could have had the balloon maker in unwitting possession of another dinosaur egg.) And there's reliance upon saying where it would have been better if things were simply shown, as when the dinosaur and balloon are swapped, when the balloon develops a slow leak, and when the stone is left behind.

The advertisement at the end got my attention. Persistent shortages (as war-time rationing and its after-effects unwound) may well have prevented the publisher from printing as many copies as they might want, but I doubt that they worried much about whether each next issue were purchased by an established customer or by a new customer. Urging customers to reserve copies was probably more a matter of indirectly persuading retailers to order them, and of ensuring that customers committed to their purchase. (The next issue, as it happened, was dated four months later; perhaps that was just an unhappy result of the aforementioned shortages, but perhaps sales were otherwise weak.)

Amination takes a lot of pix Pappy! Each of our 6 second Vines has 180 frames & we've maid 80 Vines so that comes out to... umm... ELEVENTY GAZILLION FRAMES YO OMG!!!! #Math xoxoxoxo We got almost 2 & a half million loops so far Yay!

Congrats on all the loops.

Daniel, there were definitely paper shortages after the war. Dell couldn't get the slick stock for covers, so they used a coarser grade of paper; they also cut the page count for their comics, even going so far as to crowd more panels onto the page.

Ha, I remember biting on that "reserve your copy early" line. I asked to reserve Warren's Spacemen #1, prompted by ads before it went on sale. I got a strange look from the clerk in the drugstore where I bought all my comics and magazines...and never asked again. (I need not have worried; I was probably one of the few people who shopped there who bought that magazine, anyway.)

After 100 years, Gertie is still as lovely as can be.

And those guys are great.
I'd like to dine with them, assuming that Geo Mc Manus pays the dinner bill.

He looks a bit like Jiggs, by the way.

"I wonder if anyone has ever done any research on whether American comic books (which surely got to Japan, purchased by GI's during the occupation years after World War II) had any influence on artists who later did manga?"

Did you know this one page of Tezuka? It's quite interesting:

J D, I'm aware that Tezuka was inspired by Disney, although according to one account I read, he was fooled into thinking that Walt Disney did all his own drawing (he wasn't alone in that belief).

I am thinking more specifically of those comic books that may have gotten into Japanese hands that were published while Americans occupied Japan (1945-52).

I'm with you; Gertie is a lovely gal. I am so glad this film survived.

Pappy, as well as there being continued shortages, there was also price inflation.

The Federal government had printed money as a way of hiding the costs of the war, and used wage-and-price controls to prevent corresponding price inflation. So, instead of all of the cost being paid in terms of overt taxes or of higher prices, it was in part paid in terms of those shortages and of reduced quality. By the fall of '46, most of the price controls were lifted, so the shortages began to be replaced with higher prices, catching-up with that printed money.

As you've noted elsewhere, the comic-book industry resisted changing the prices-per-issue; so, instead, they changed the price-per-page, by reducing the pages-per-issue.

Daniel, the way you explain the economics after the war dovetails with what a grizzled WWII vet told me twenty years ago: "Prices were held down artifically during the war; afterwards the price controls were lifted and we started chasing them...and we're still chasing them."