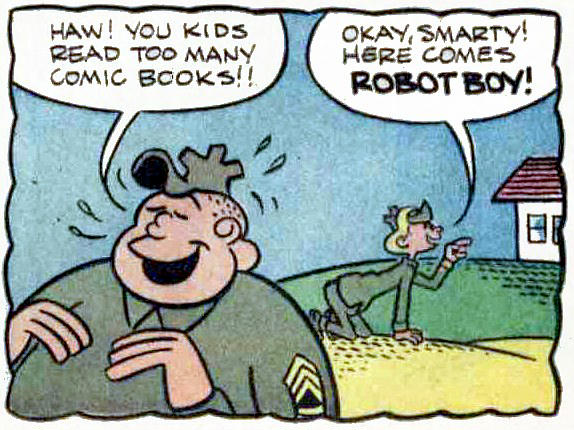 This issue of G. I. Juniors, published as Harvey Hits #110 (1967), is a take on the mid-'60s popularity of comic books. It is drawn by Jack O'Brien, who was a gag cartoonist of the era. I have shown another G.I. Juniors. Just check the link below the story.

The Harvey Comics that were for little kids were everywhere in the 1960s. I saw them every time I went to the comic book spinner for my favorite comics. I never picked them up, never looked at them. I dismissed them as being beneath my dignity and intelligence. About 1970 my brother’s girlfriend (about to graduate university with the first of what eventually became several degrees — so much for my intelligence) gave me a box of Harvey Comics. She had bought them off the stands and no longer had room for them. Although the art was unsigned, looking through them I could see cartooning from artists like Warren Kremer and Howie Post (and Jack O'Brien, among others). My thought was, “What have I been missing?” Looking at them wiped away my former prejudices. I call this a “My Back Pages” moment, from the Bob Dylan song with the line, “I was so much older then, I’m younger than that now.” 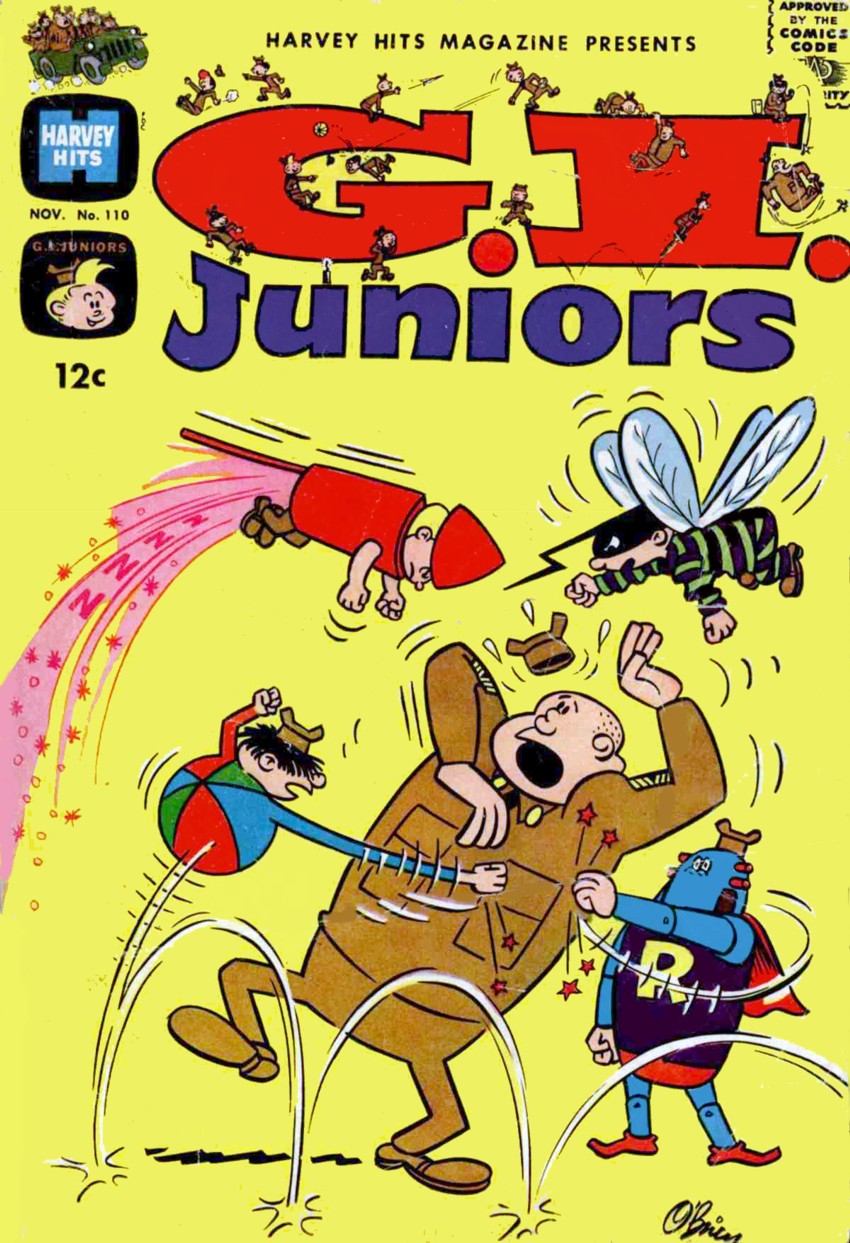 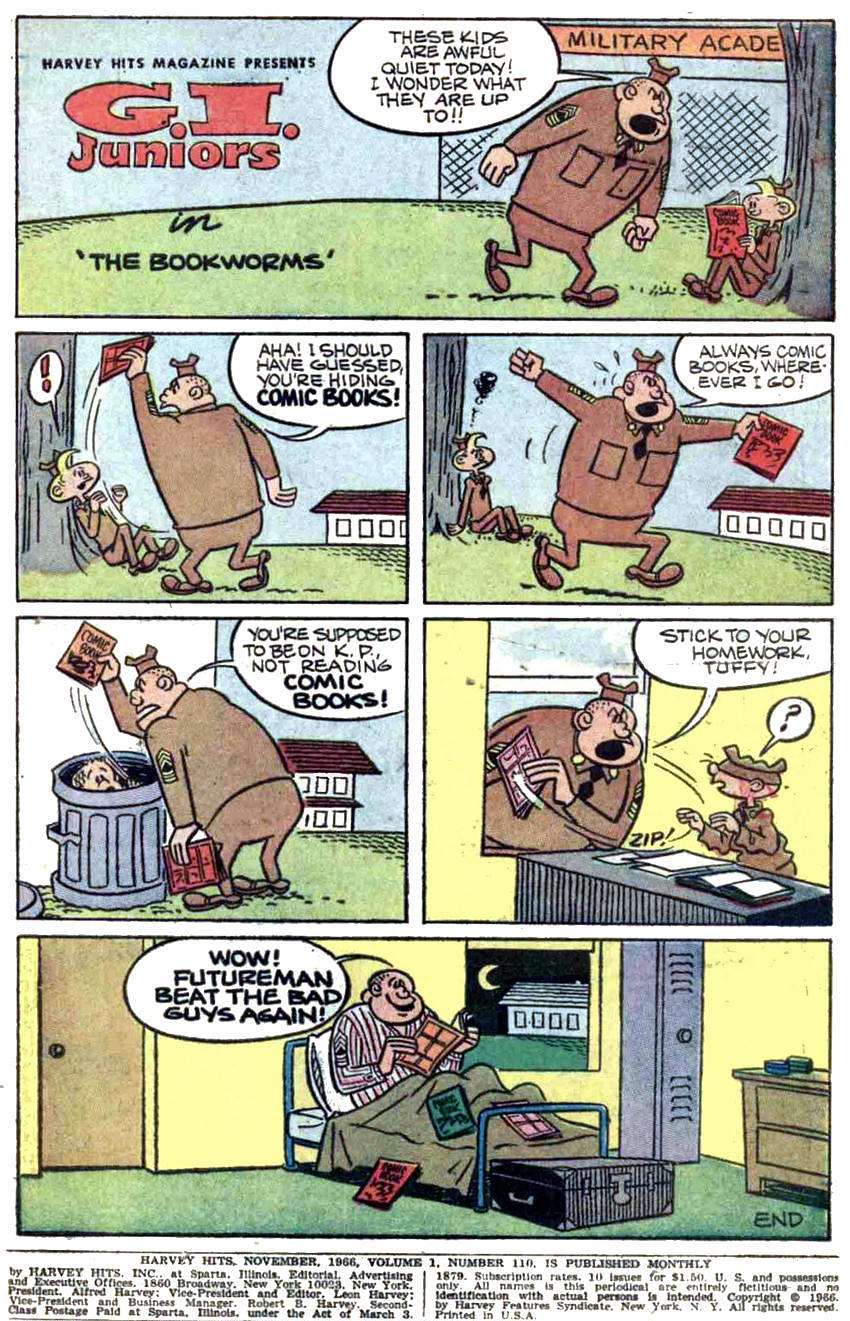 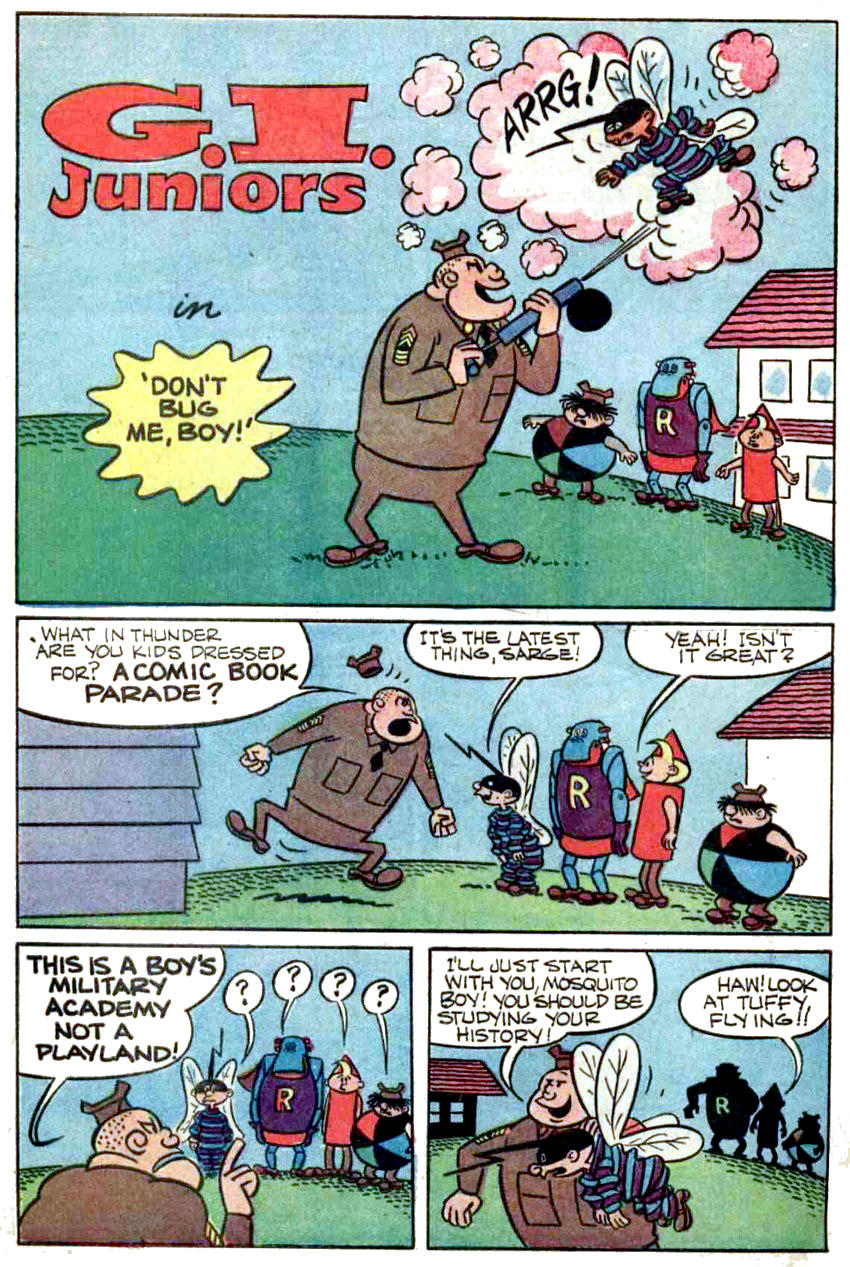 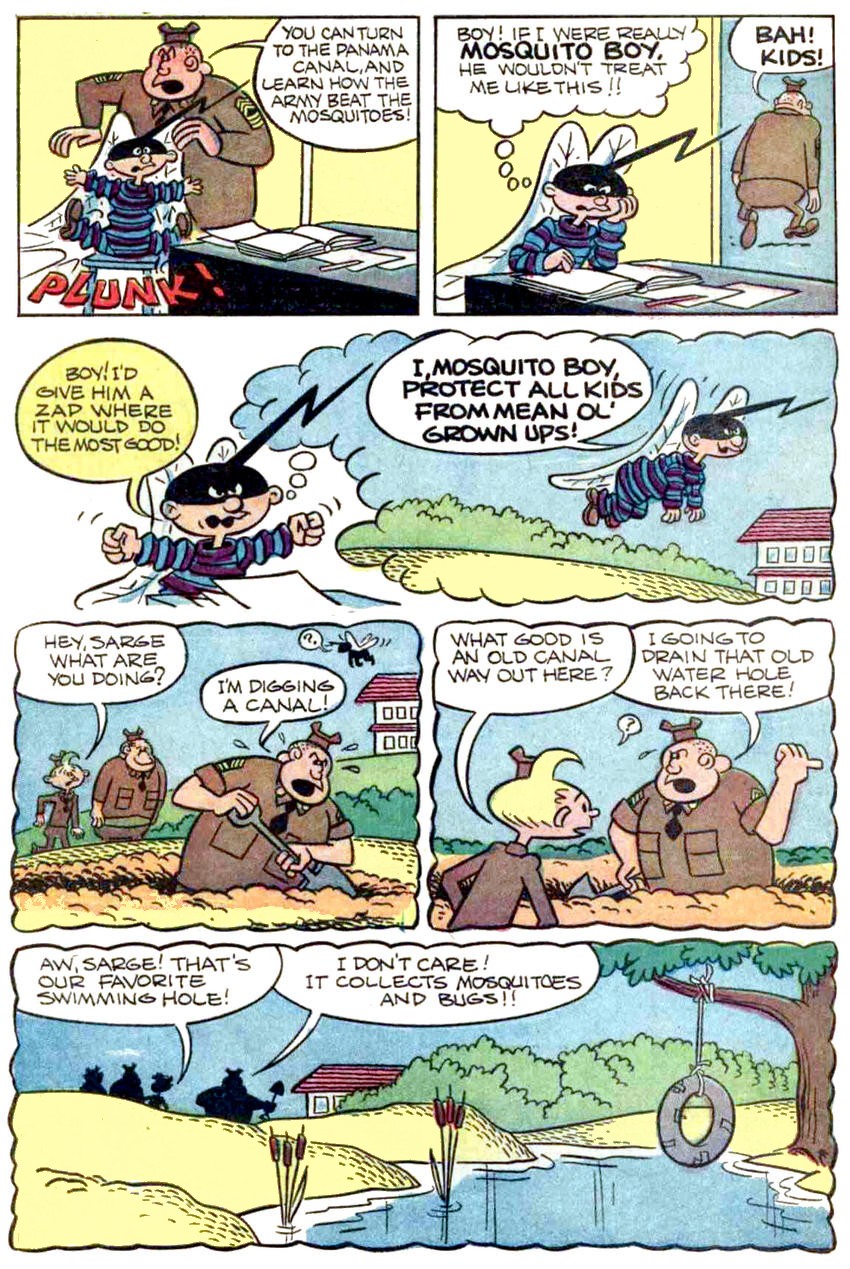 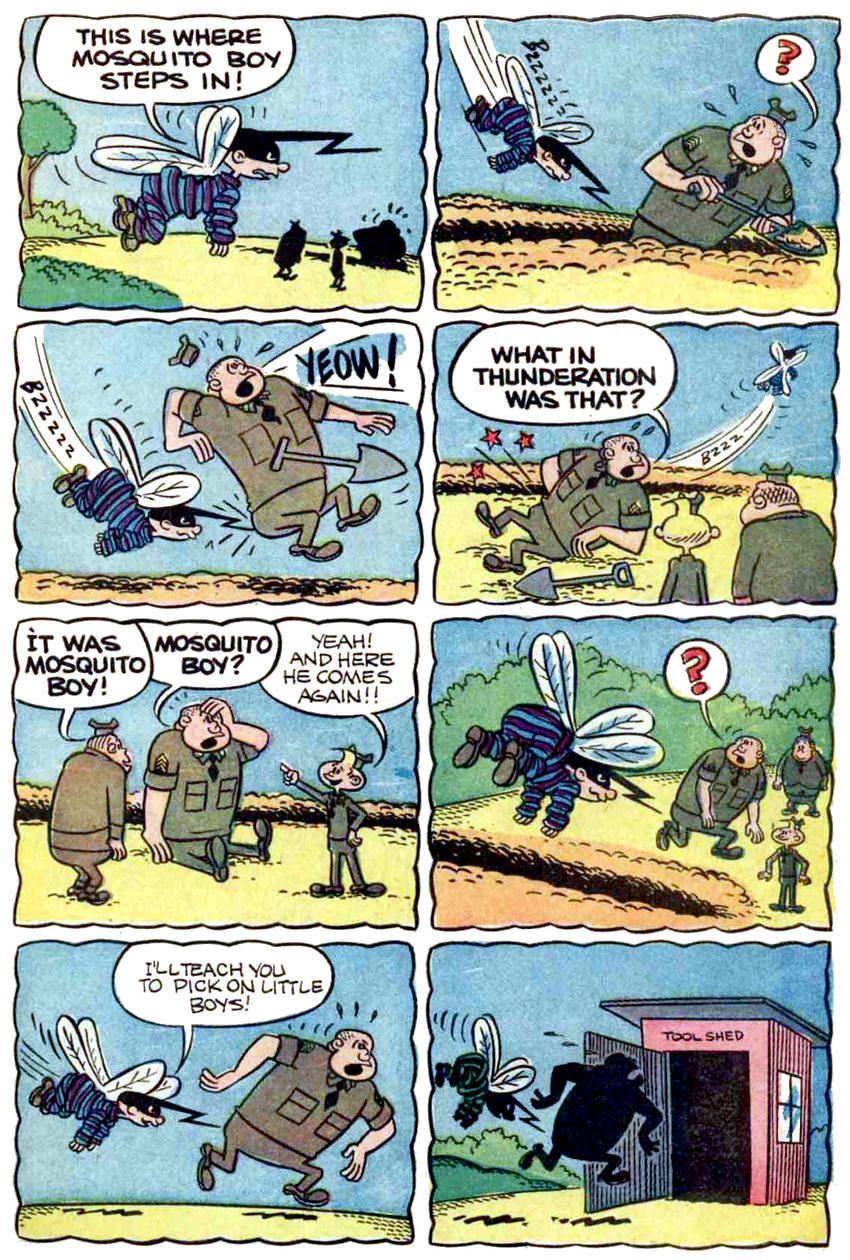 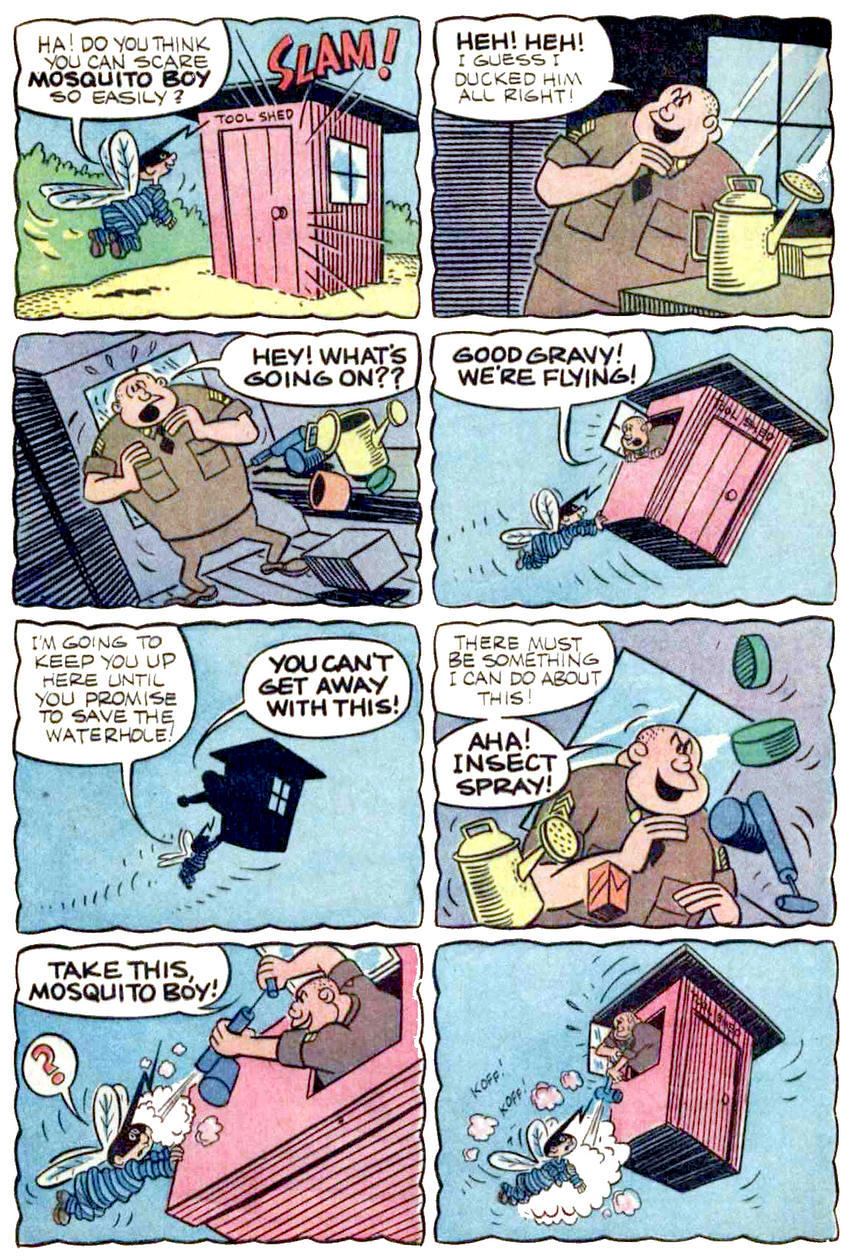 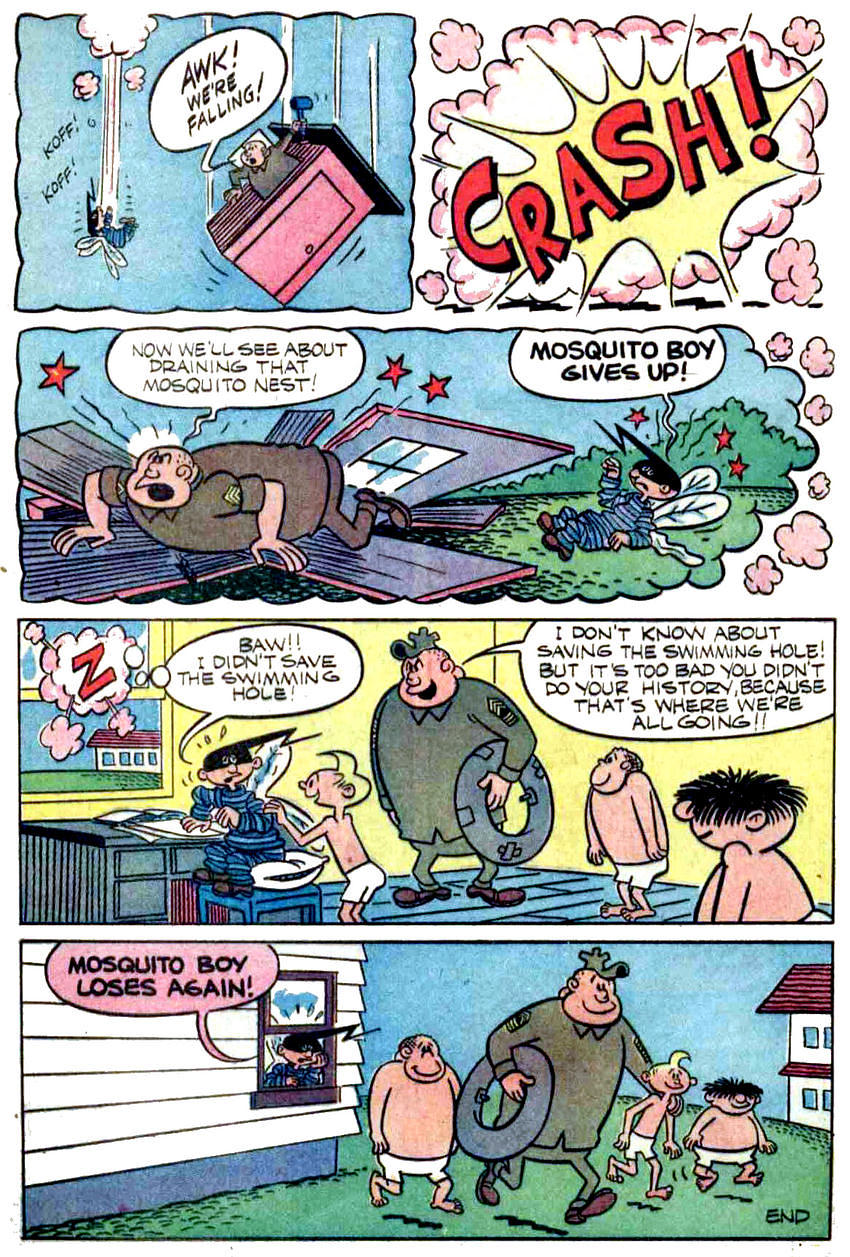 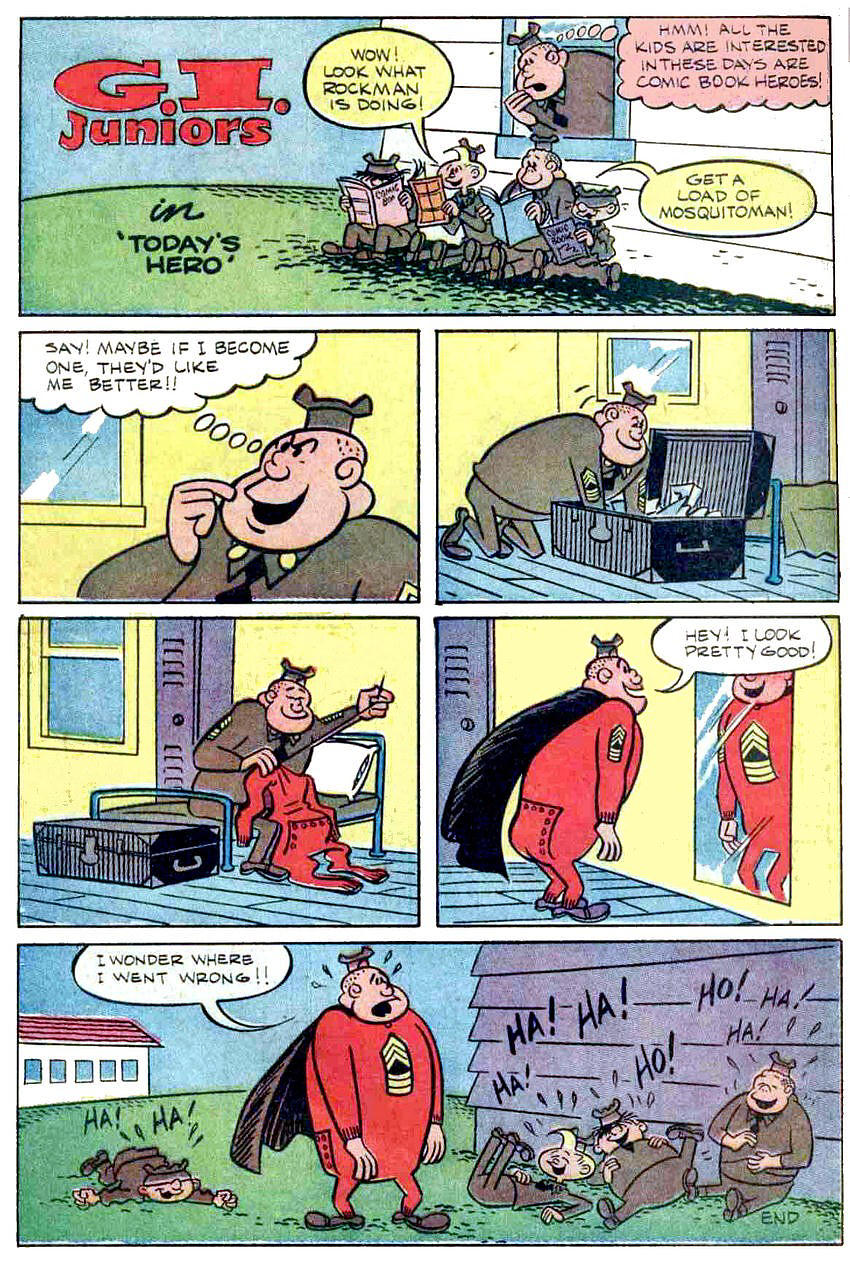 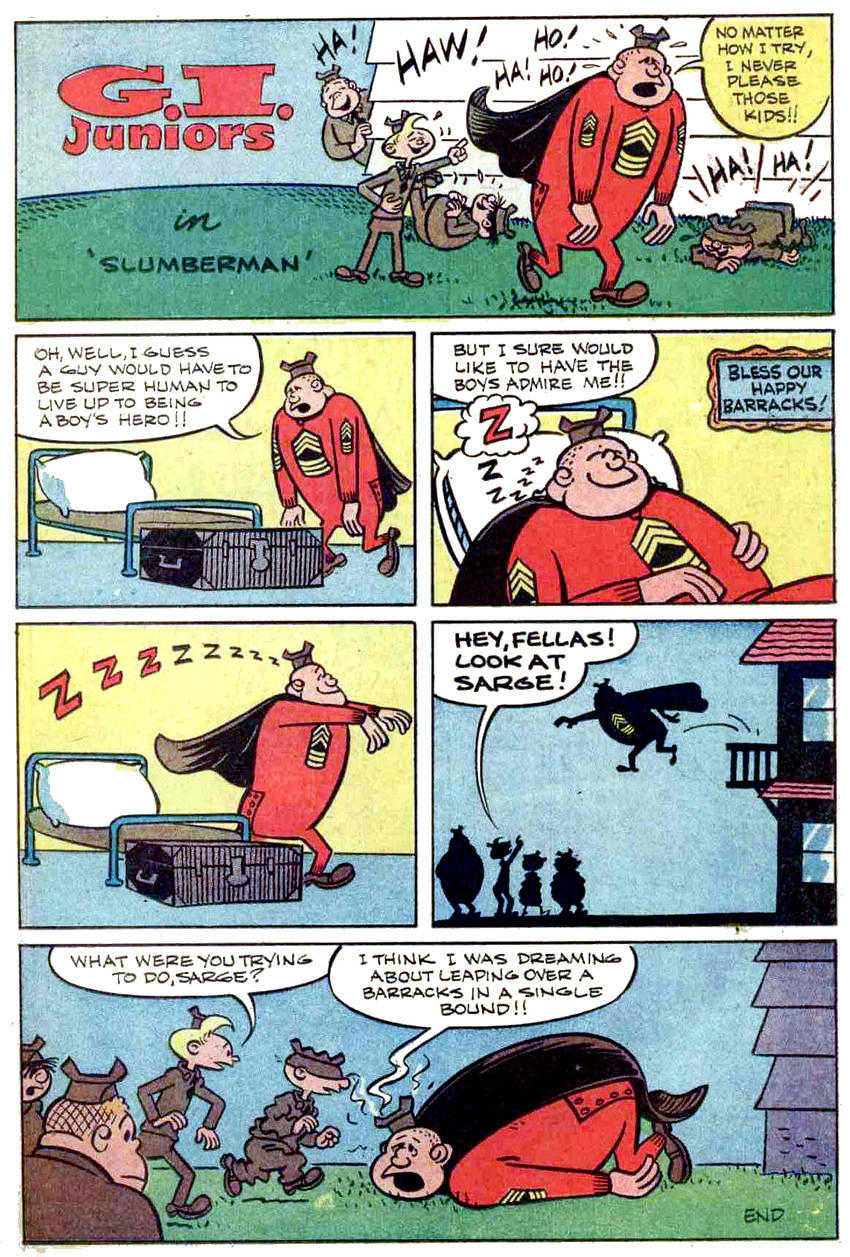 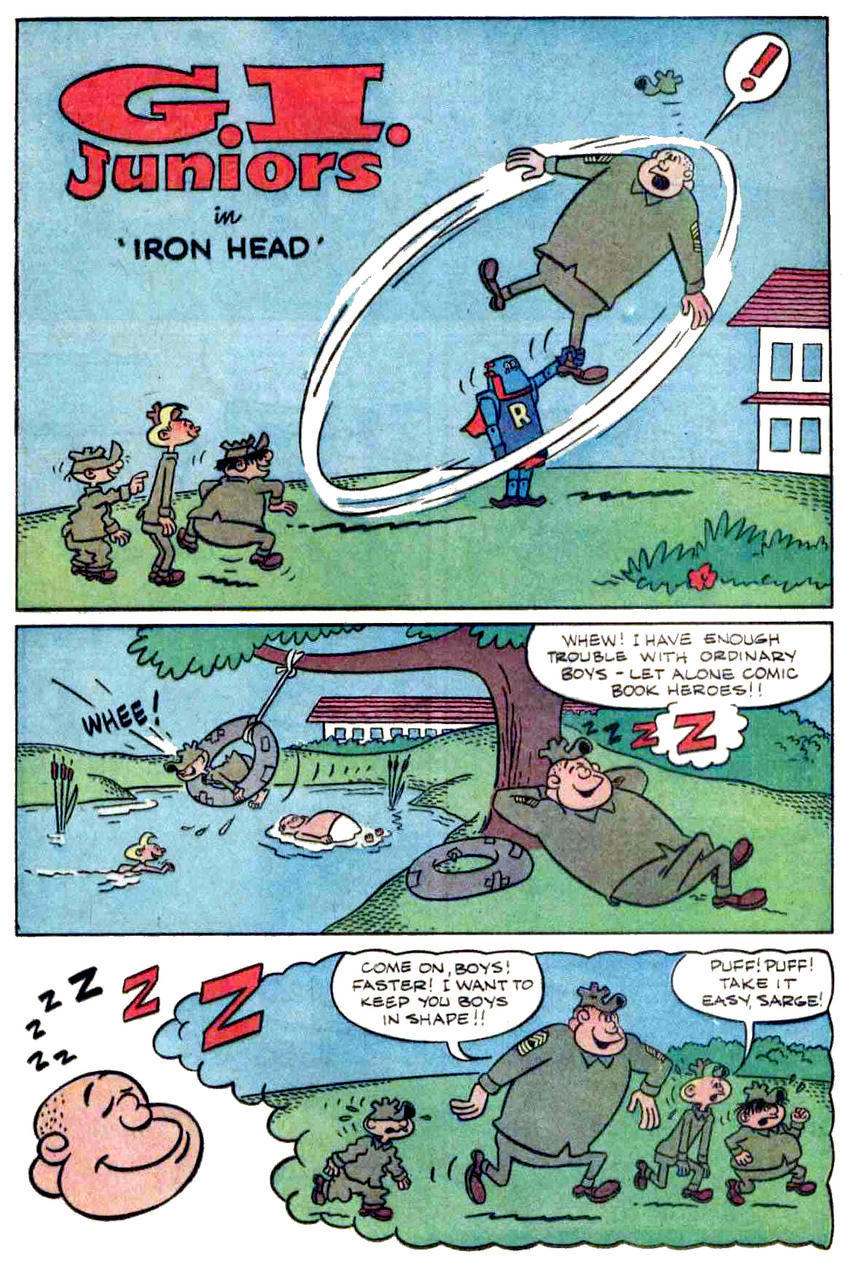 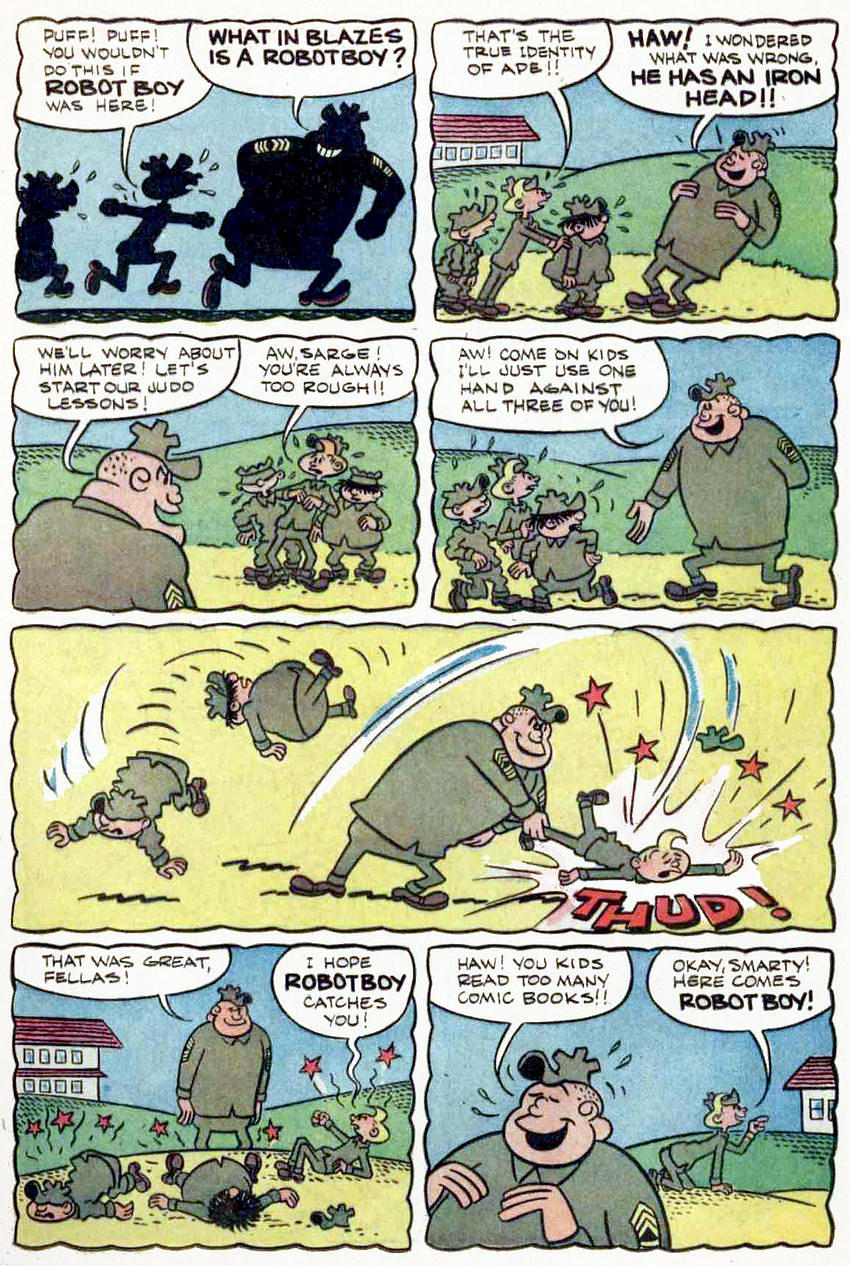 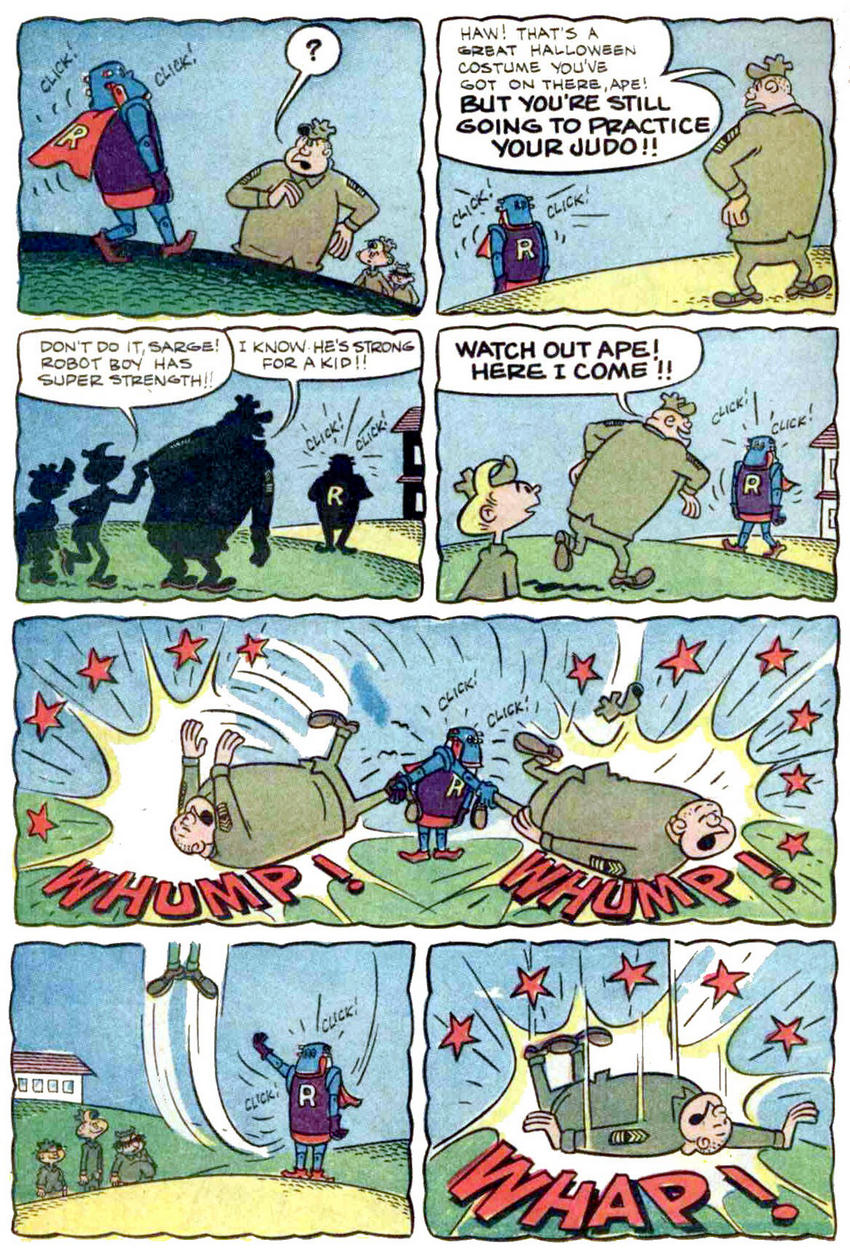 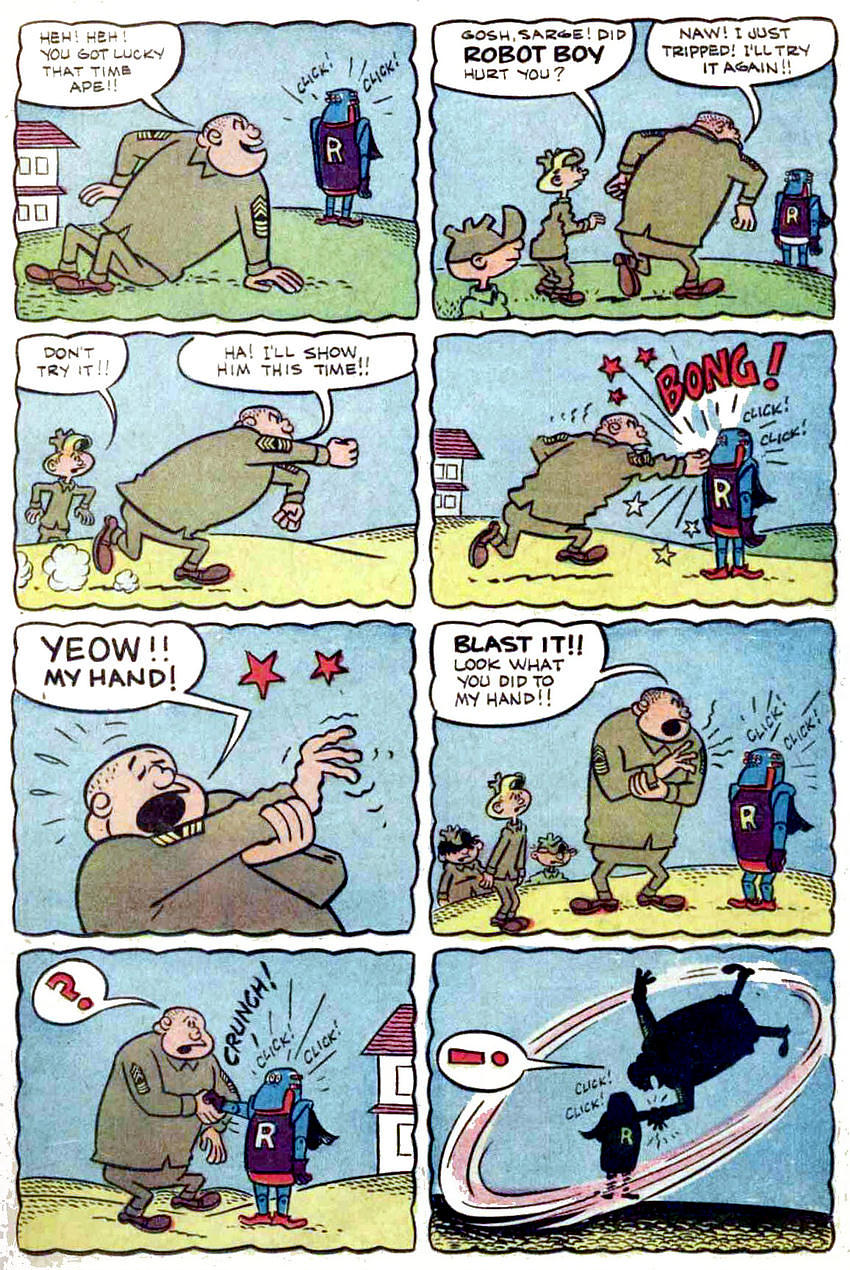 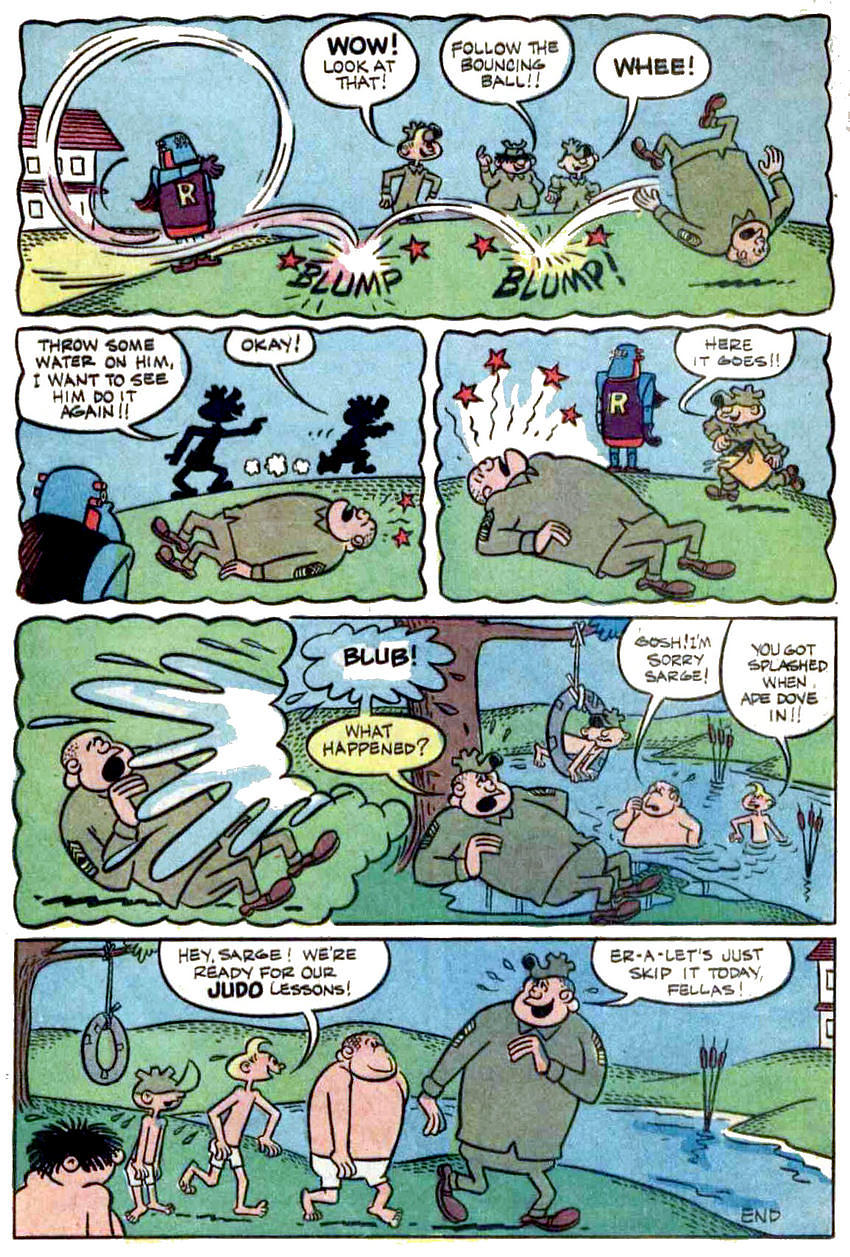 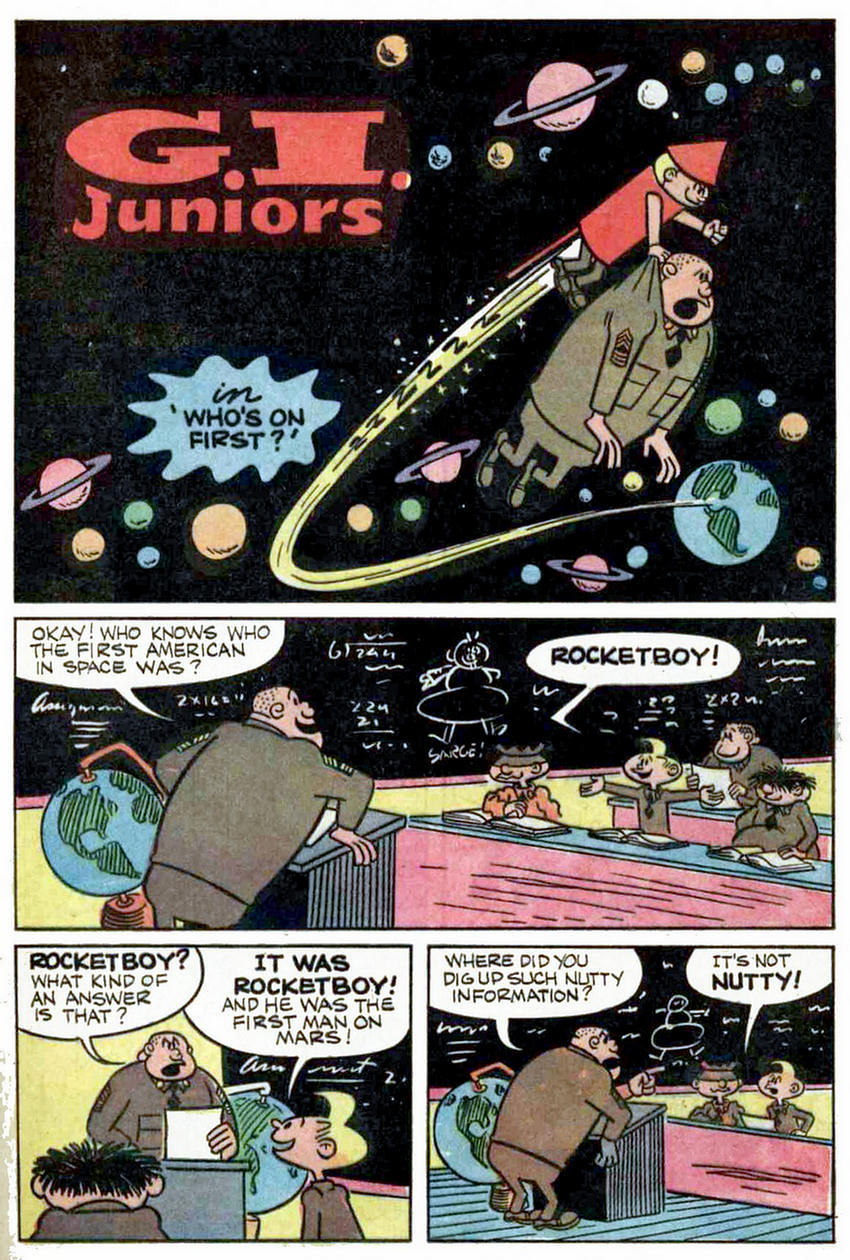 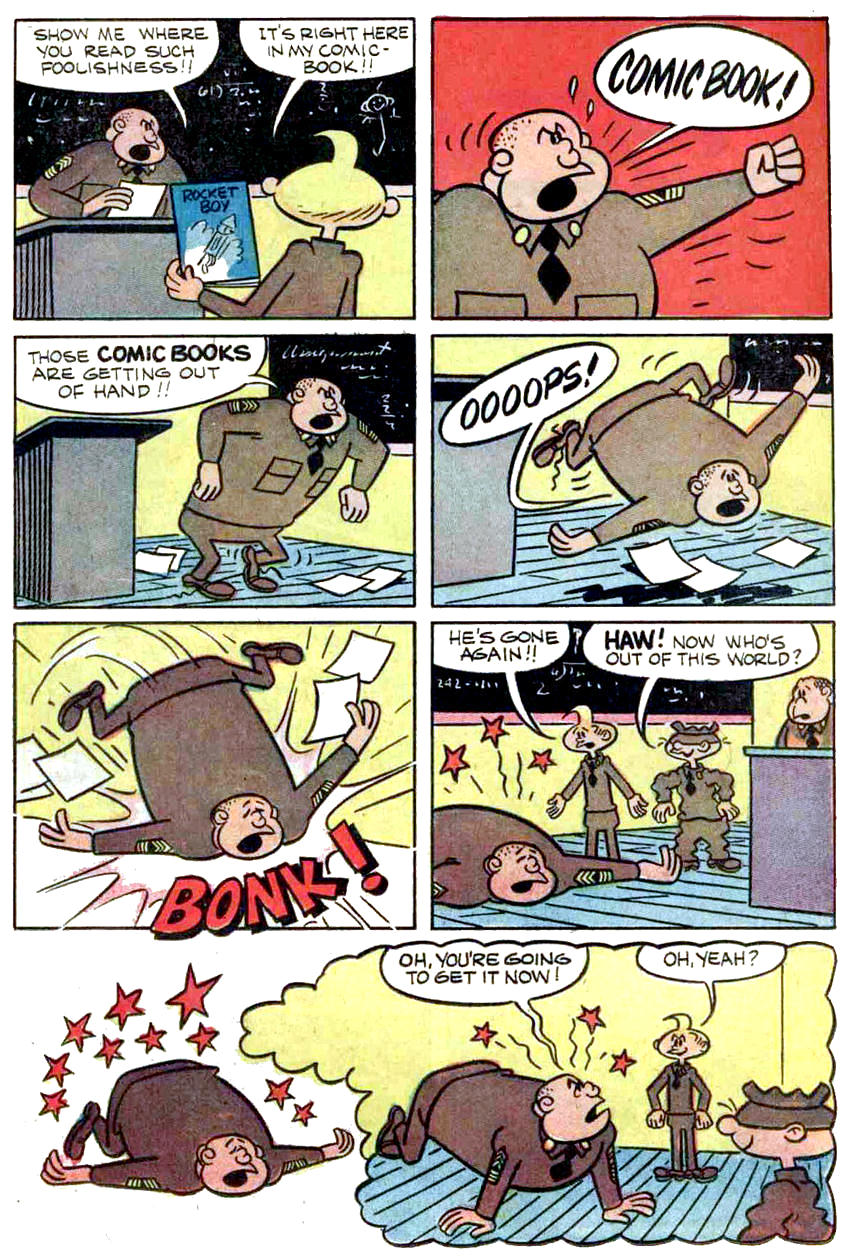 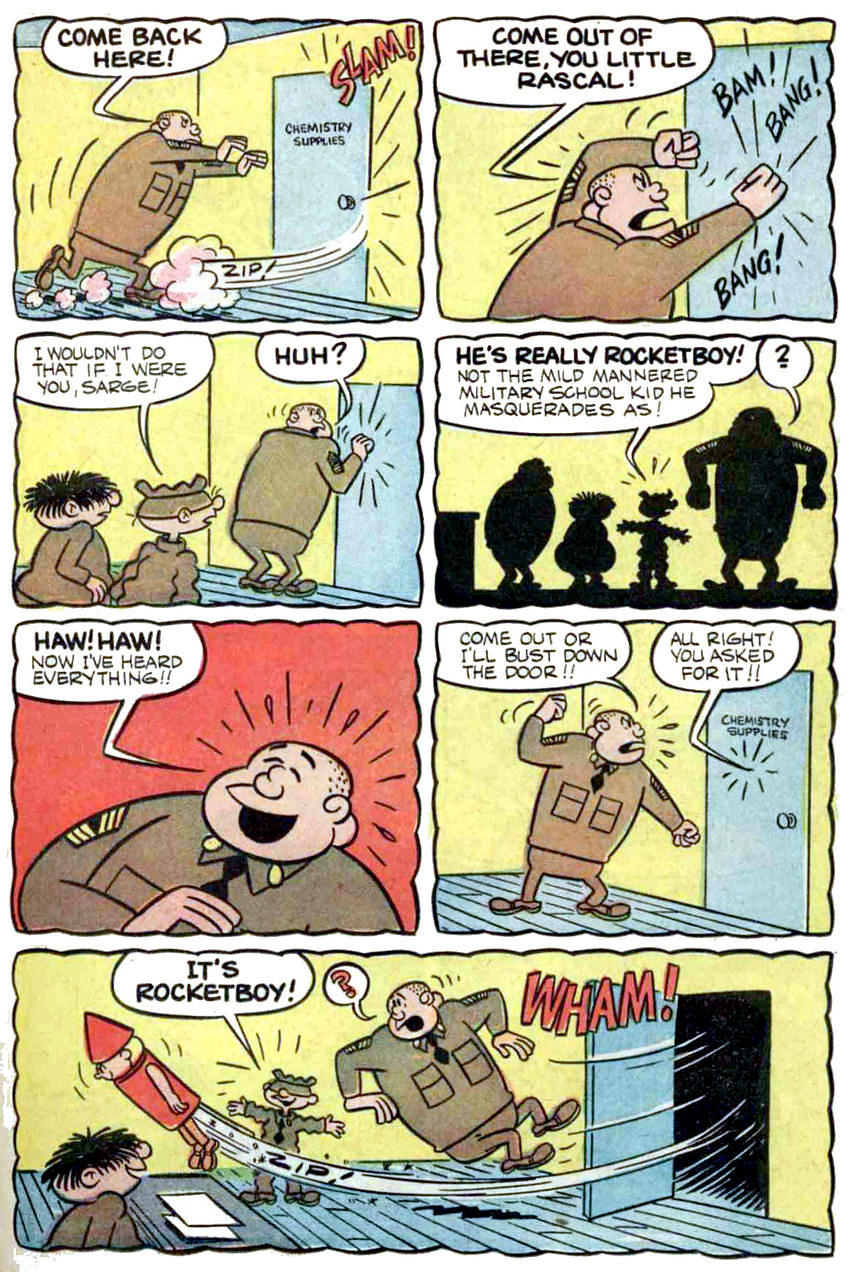 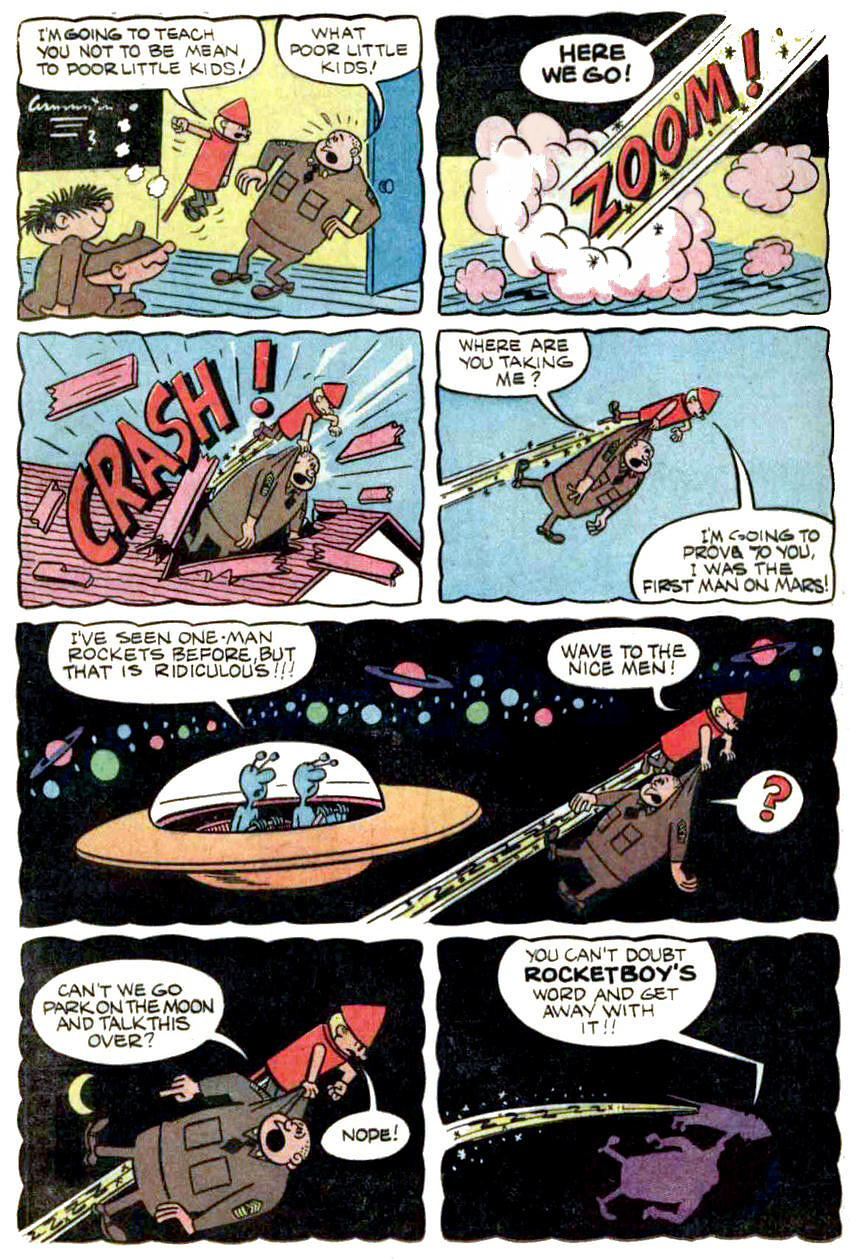 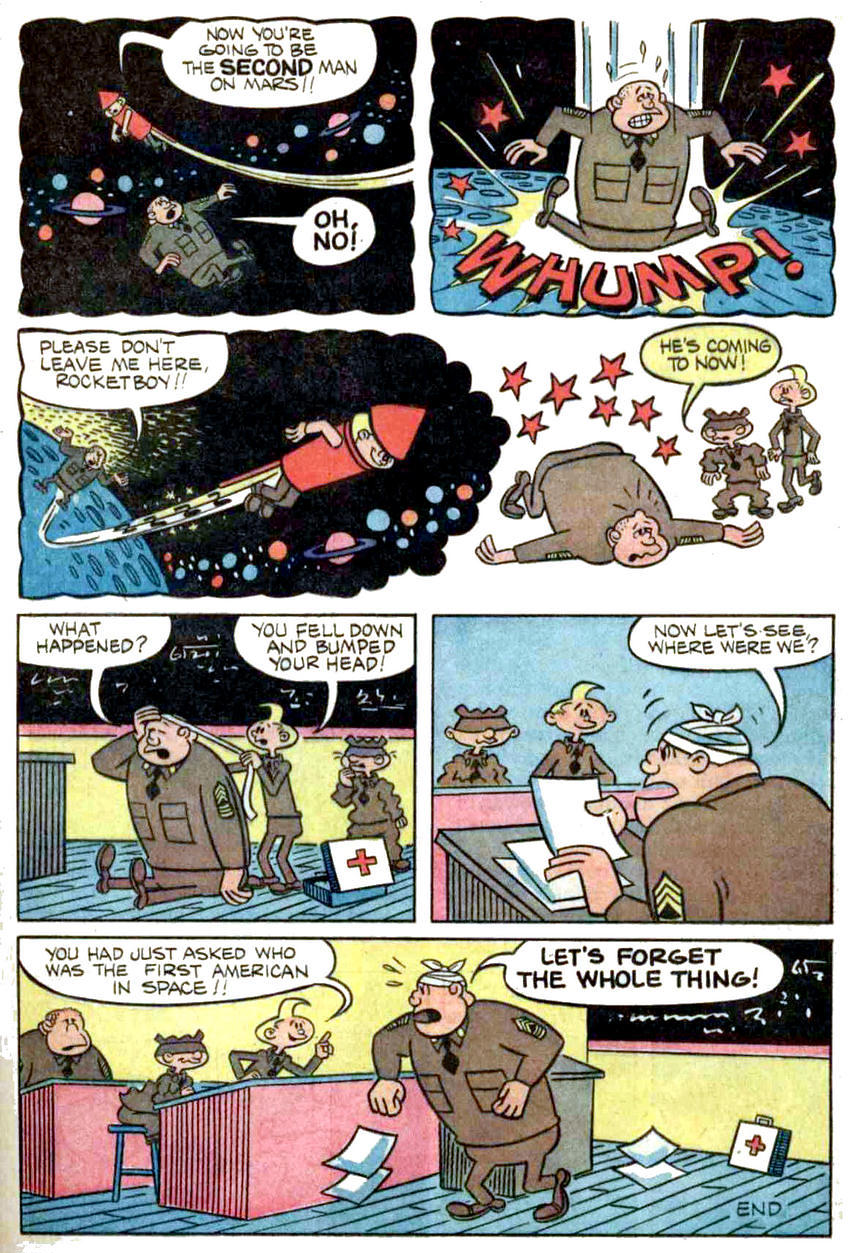 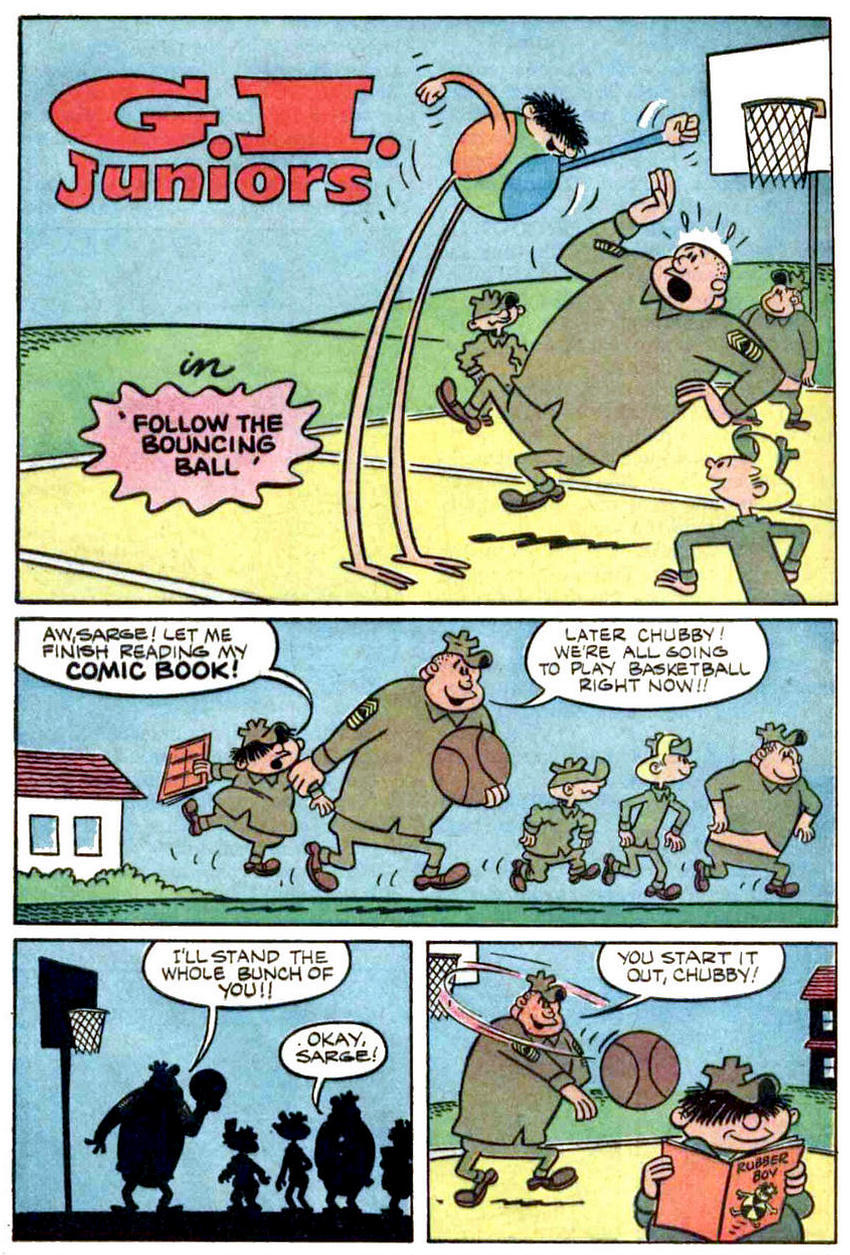 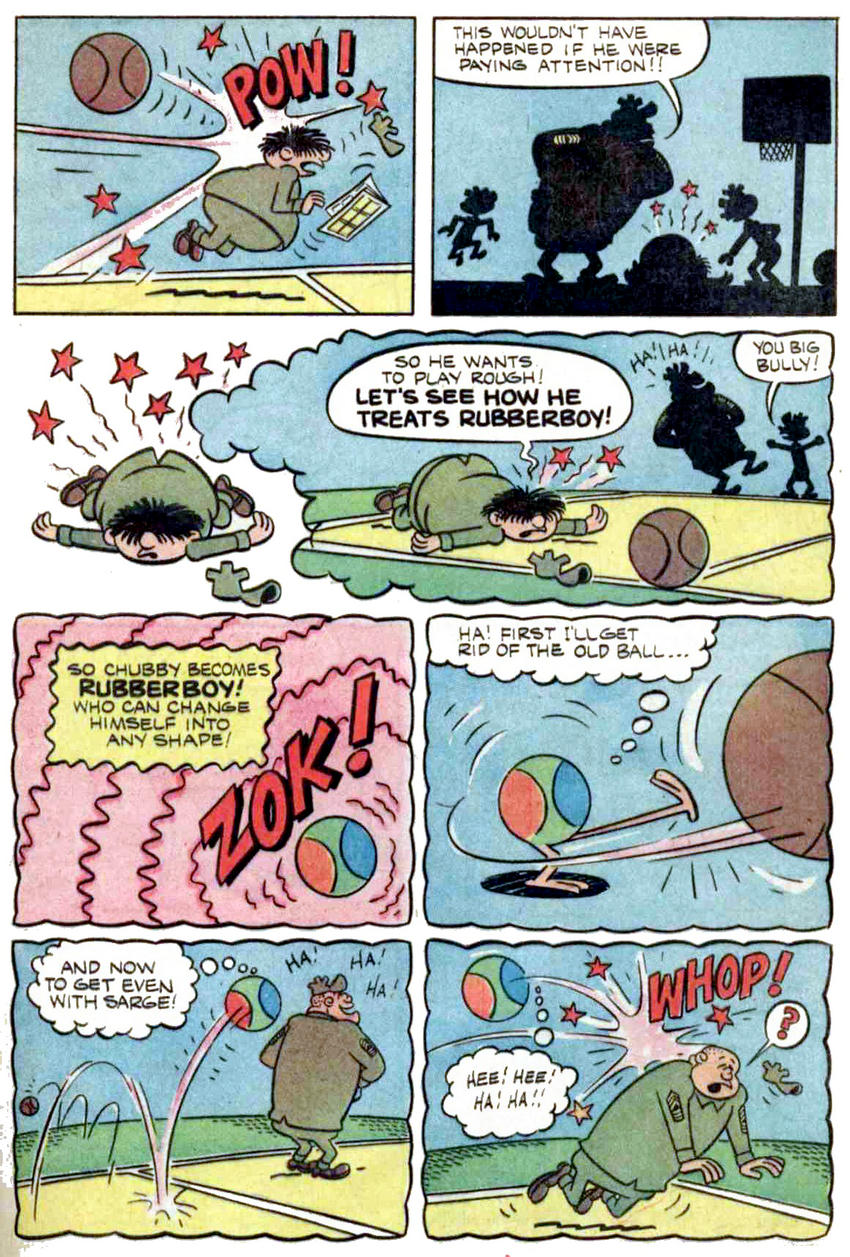 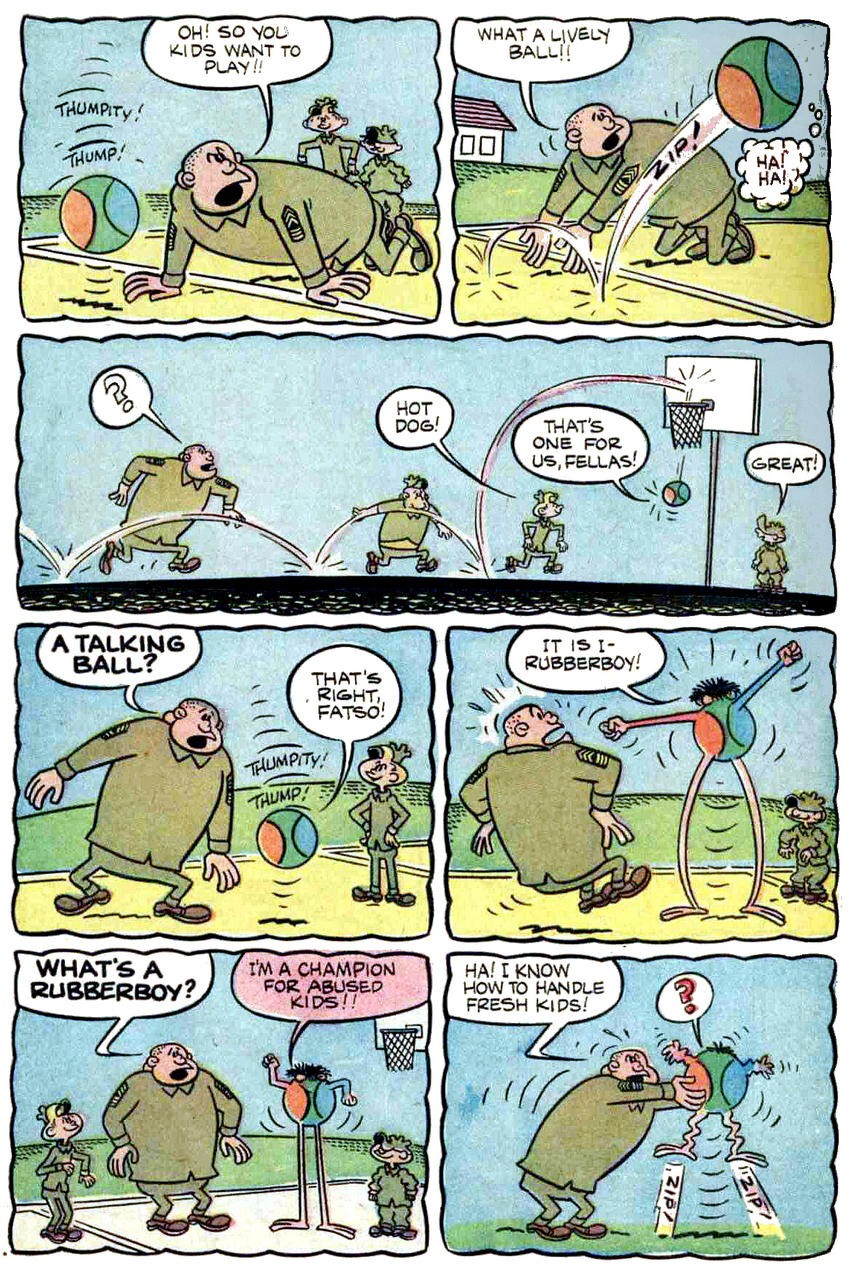 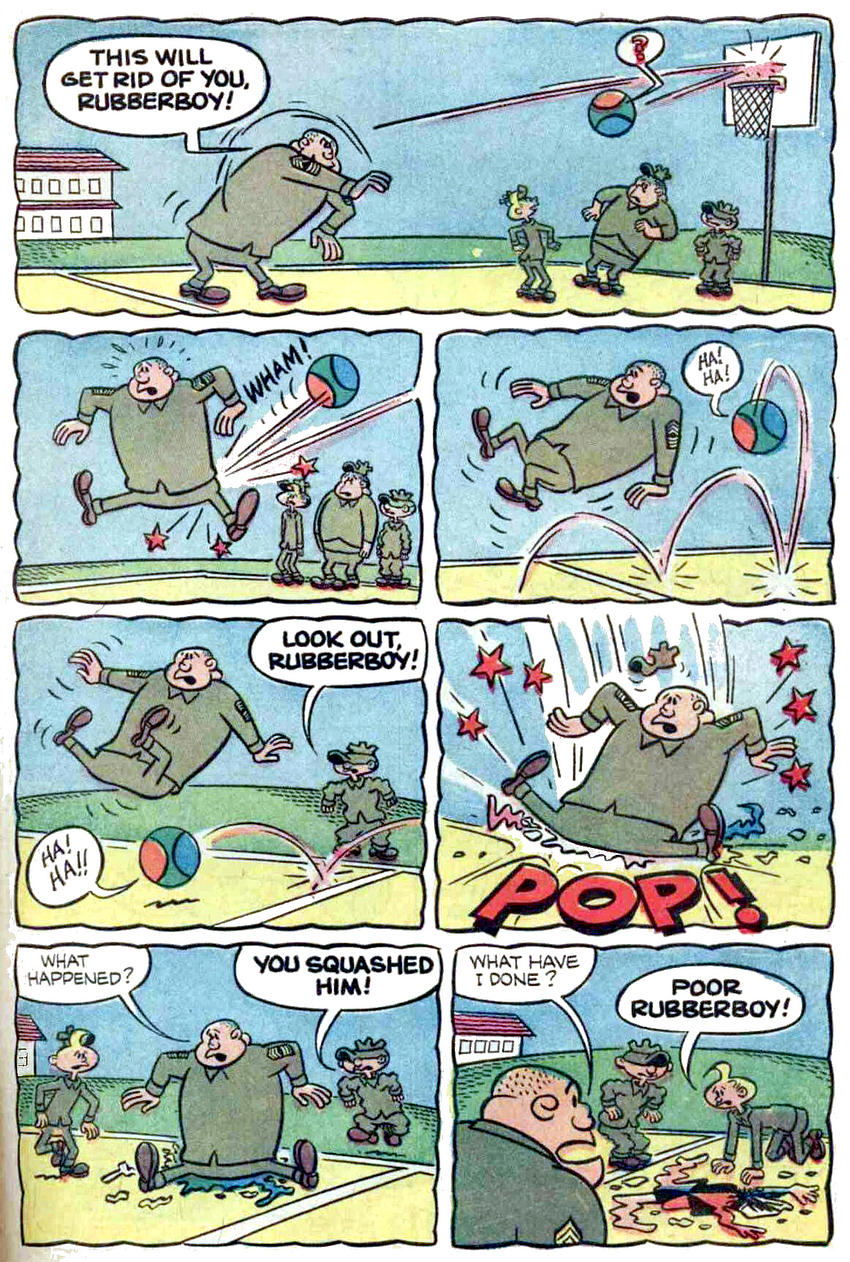 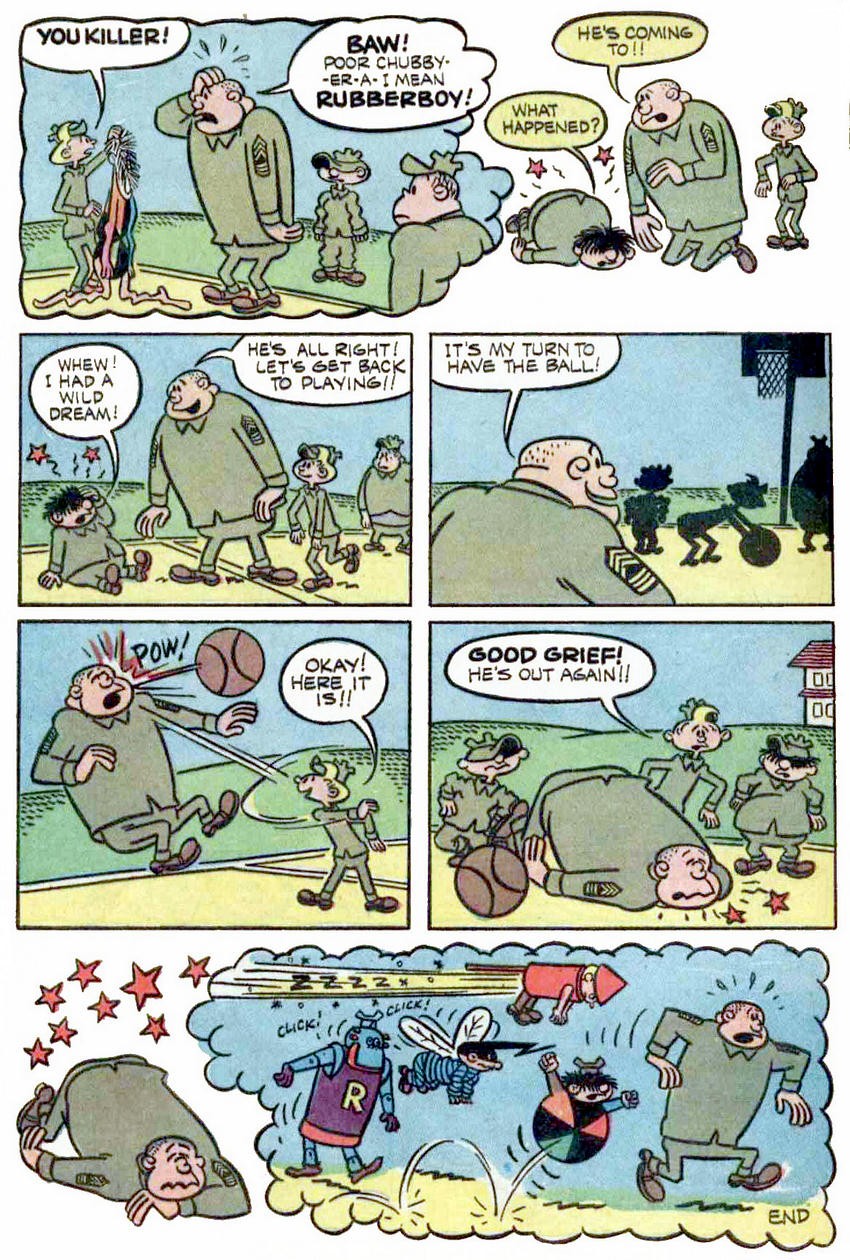 As promised, another G.I. Juniors. Just click the thumbnail. 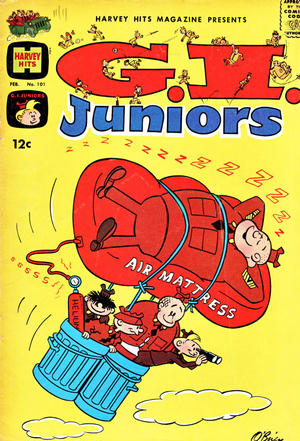 Howie Post of the "Dropouts" strip? Yes, the Sargent's nose reminds me of some of his characters!
Have no time to read all of it now, but judging from a couple of panels it is a pretty smart humor.
Poor RubberBoy! I guess Sarge was more familiar with RubberGirls. Tuffy looks like a young Beetle Bailey, I always figured he was raised in the barracks!

J D, Howie Post was an important and influential artist for the Harvey line, but when you have time to read the story you'll see it was not done by him. Jack O'Brien was a cartoonist who had a lot of one-line gag cartoons published in magazines over the years. He modified his style somewhat to fit the Harvey-style. Stories like this often fool people with their simplified cartooning, but even though it was drawn for kids 9-12 years old, I think the humor can be enjoyed by adults as well.

And we are all adults, are we not? Having said that, I wonder...do I have any readers who are teenagers? Pre-teens? Please write and let me know.