Number 1746: “Right through de head.” The Crime Cult and the Higgins Gang 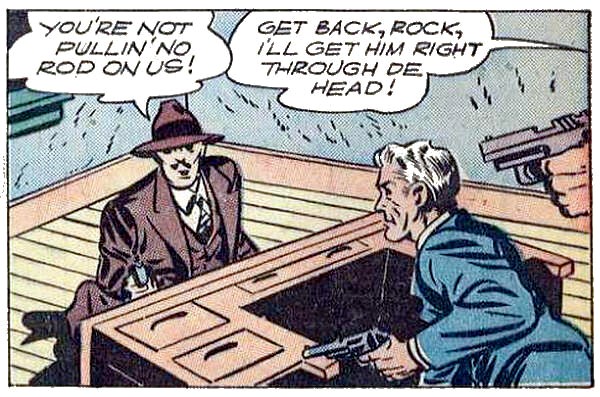 Gang Busters was a popular radio program. It was licensed by Dell, and later by DC for comic book adaptations. These two stories, reprinted in Dell’s Four Color #24 (1943), were originally published in Popular Comics, issues #72 and #73.

Dan Gormley, who drew the stories, is better known to me as a funny animal artist. I was unfamiliar with his crime comics work, but he signed both stories.

Both stories have panels where a victim is shot through the head. (Shot through “the skull” in “The Higgins Gang” story.) I think the same writer wrote both, and he also used a “Yow!” in both stories. John Stanley was known for his use of that word, but are these early work by Stanley? I won’t go that far. They seem too formulaic for an inventive writer like Stanley. And as far as catching crooks goes, the detective, Chief Winston, seems more lucky than good.

An obligatory “Crime does not pay!” message is inserted into the last panel of each story. 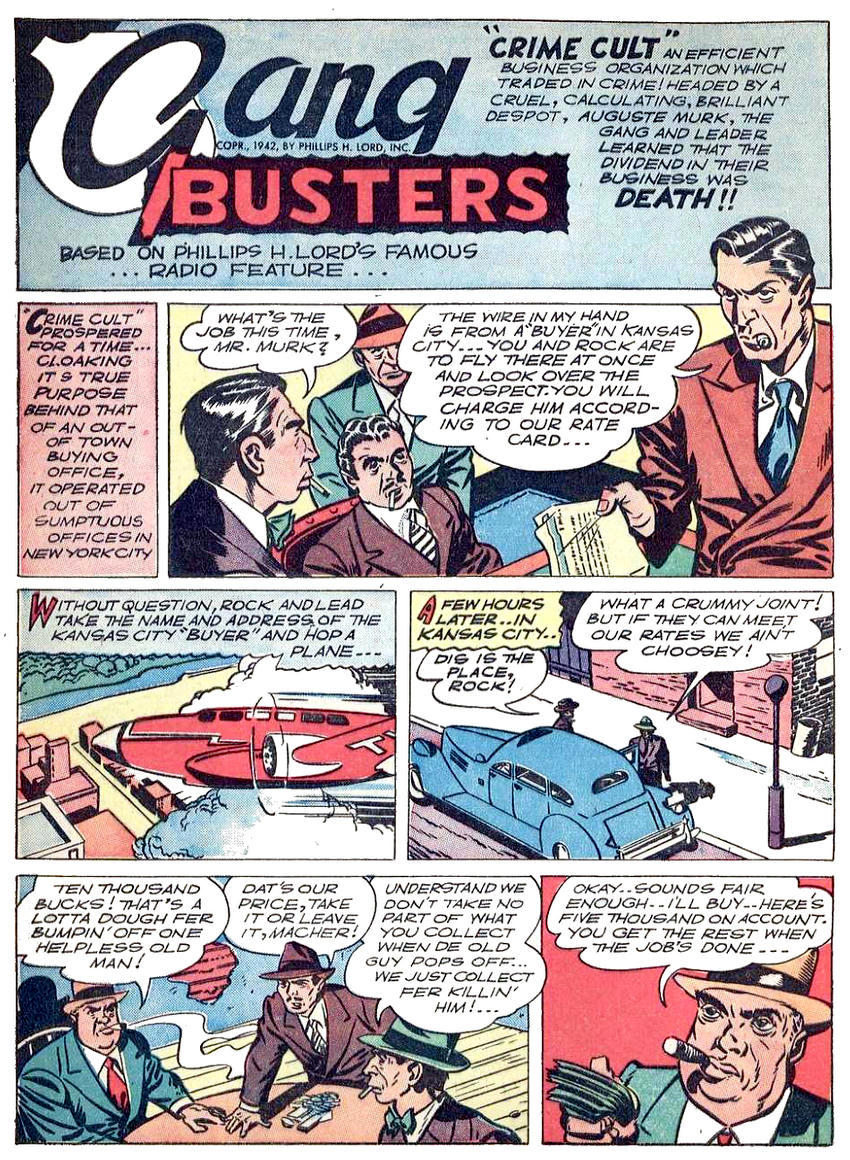 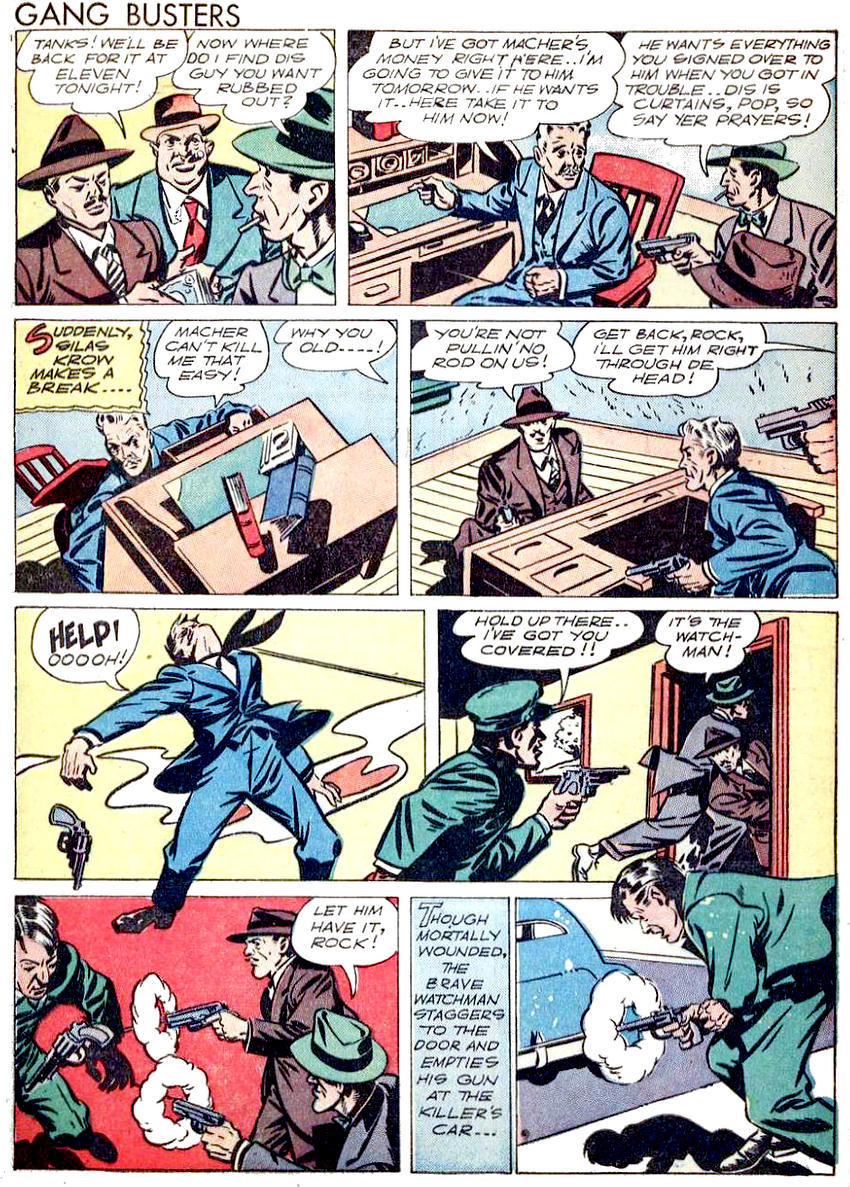 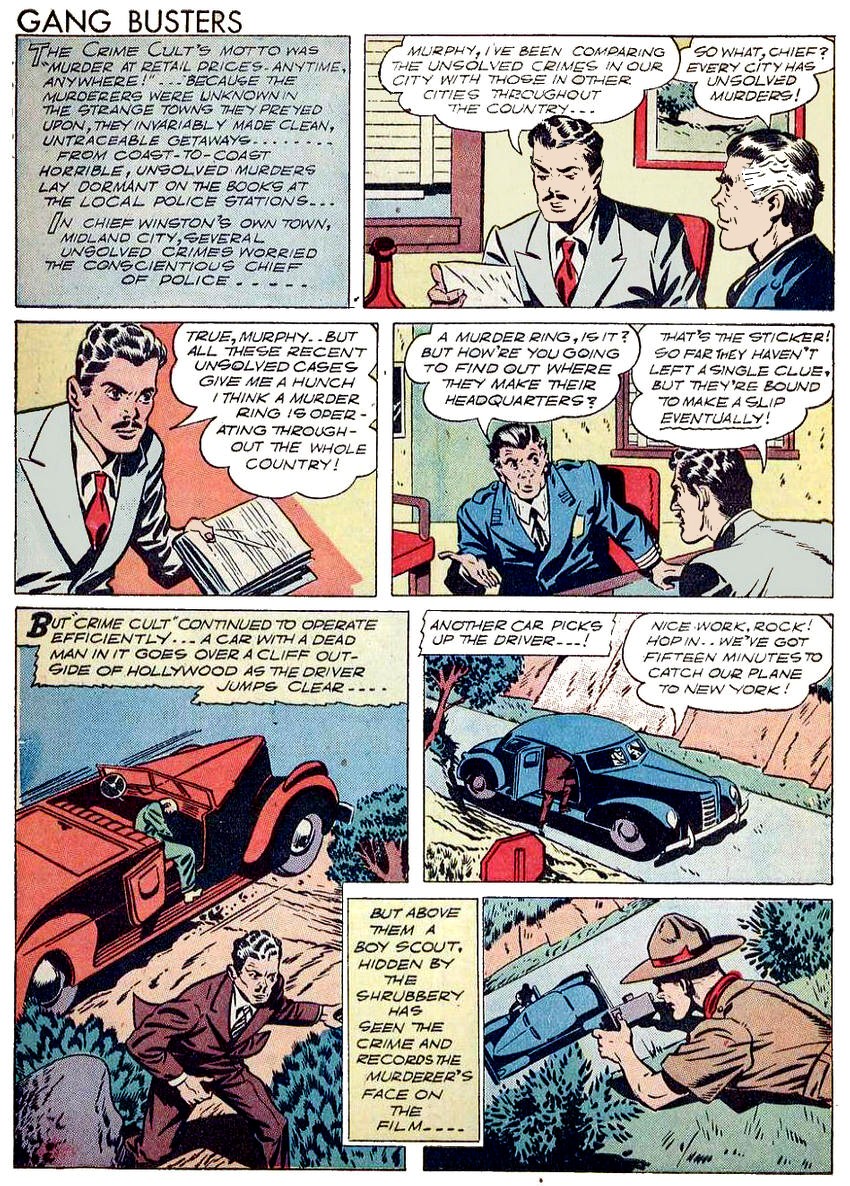 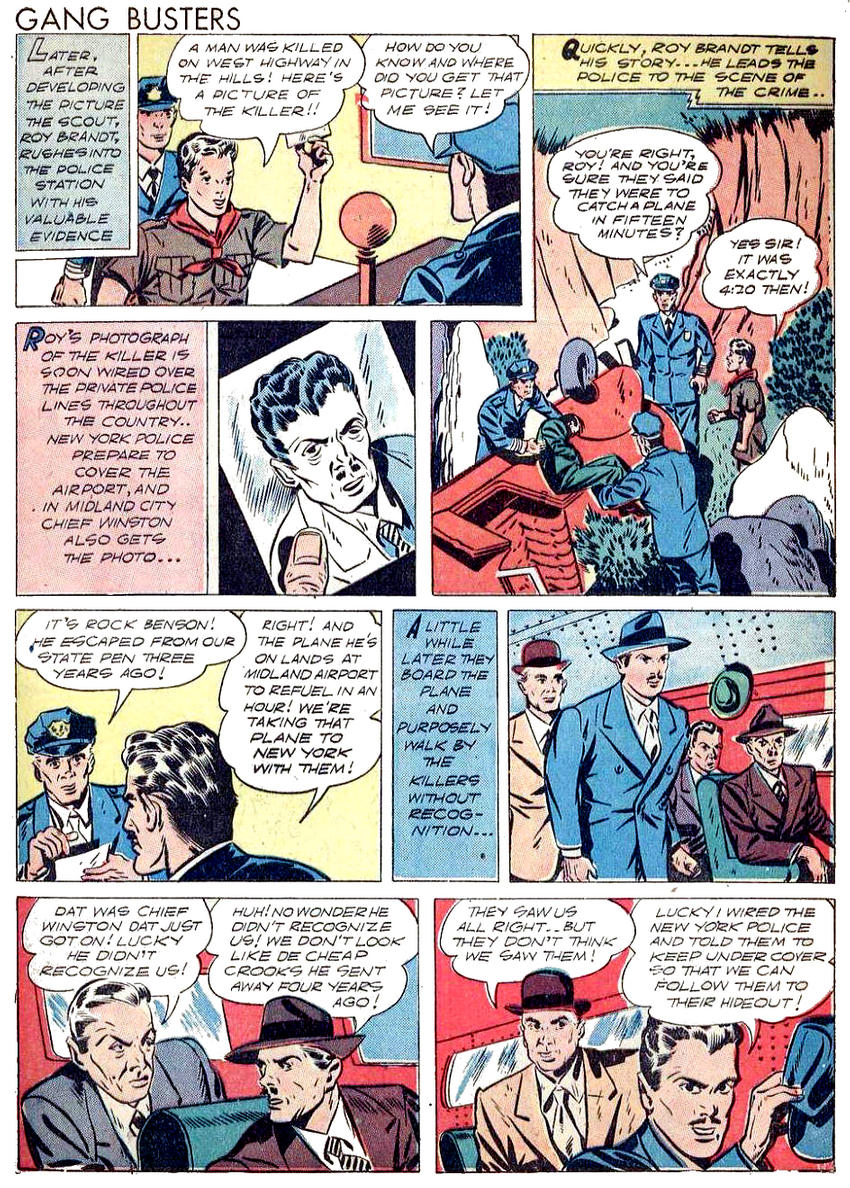 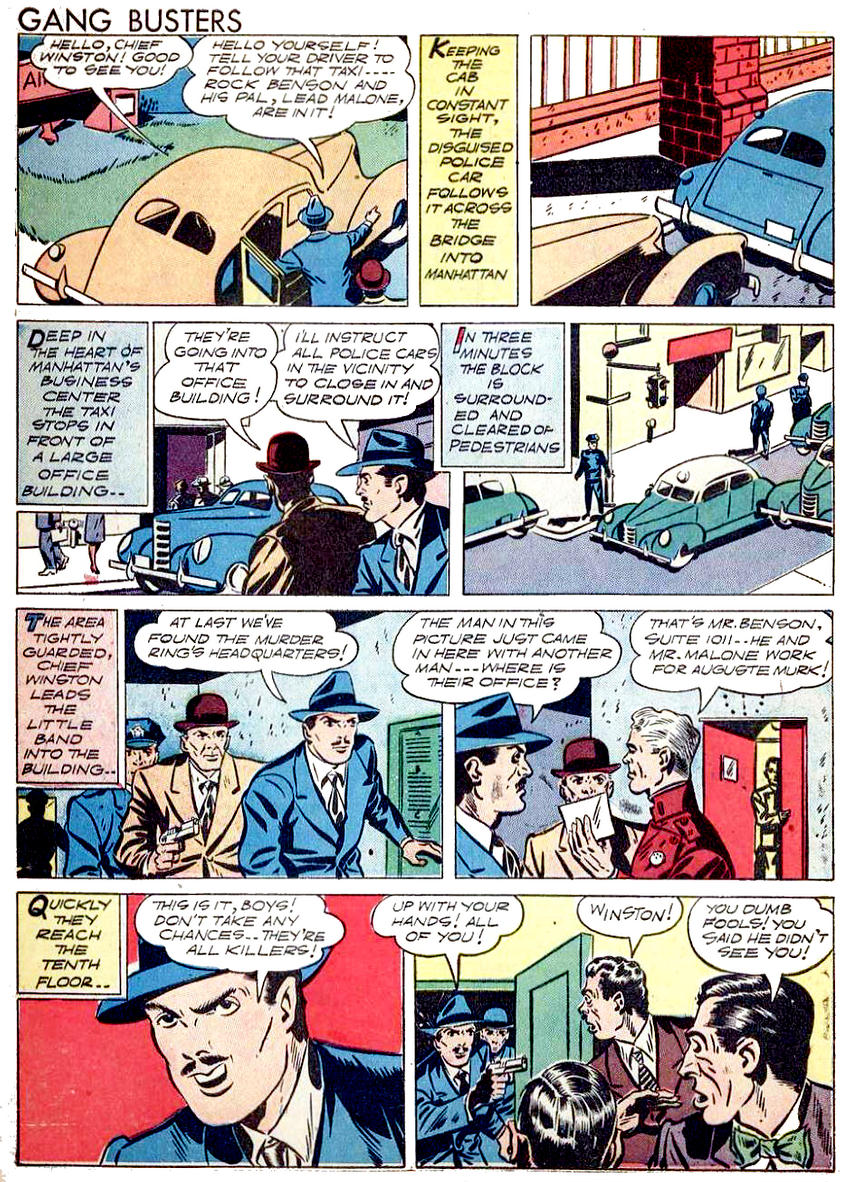 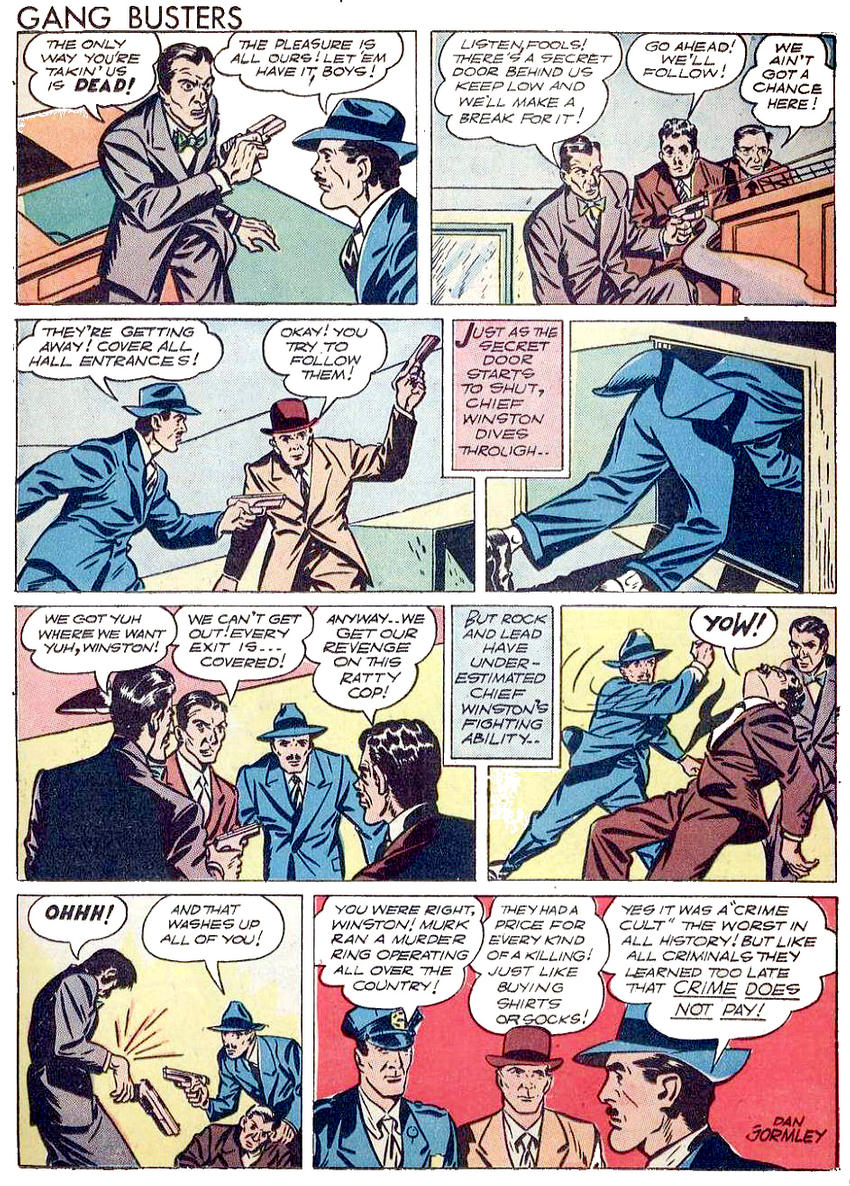 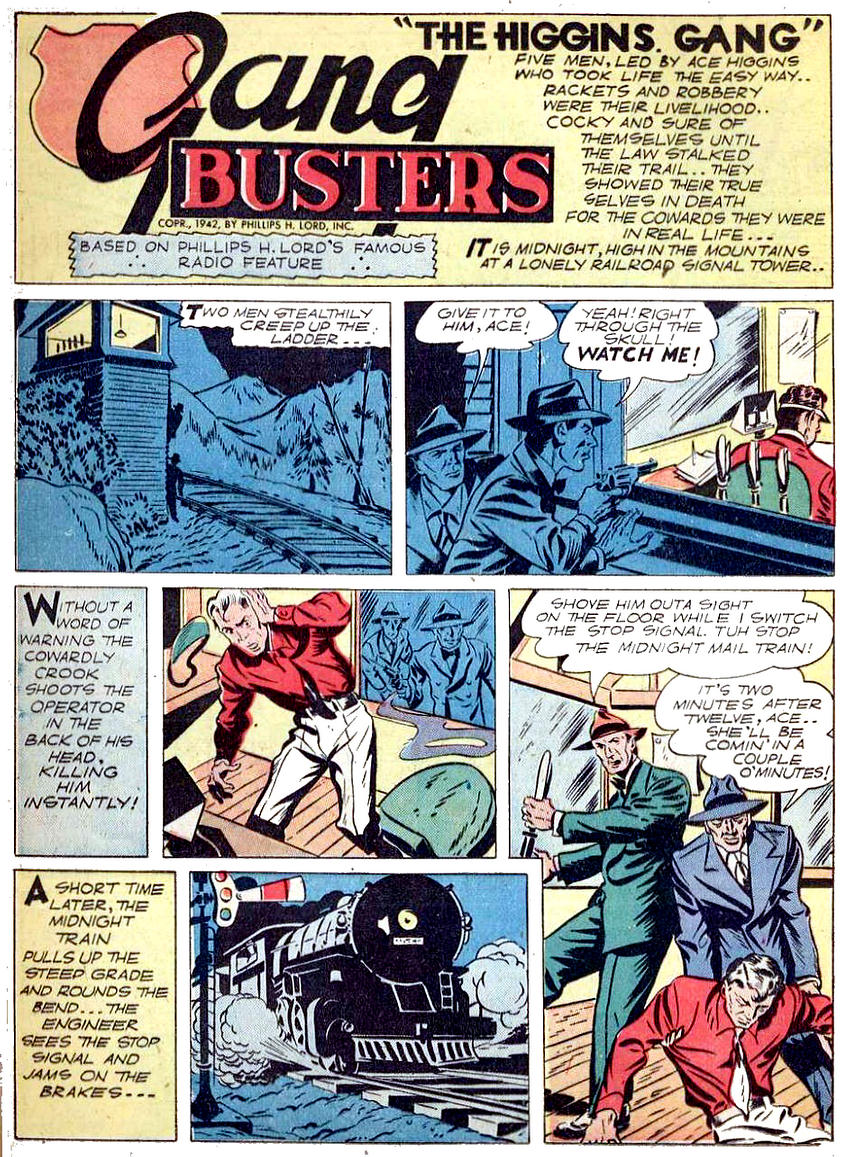 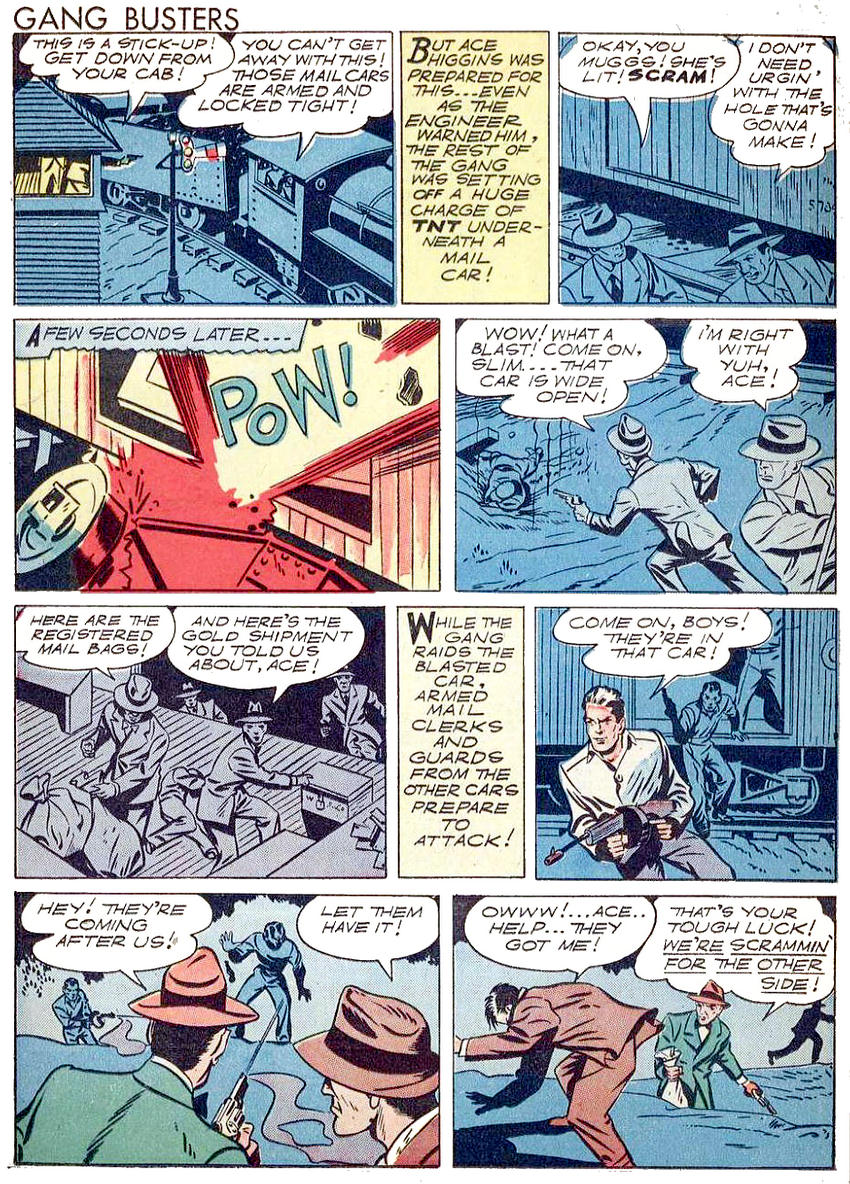 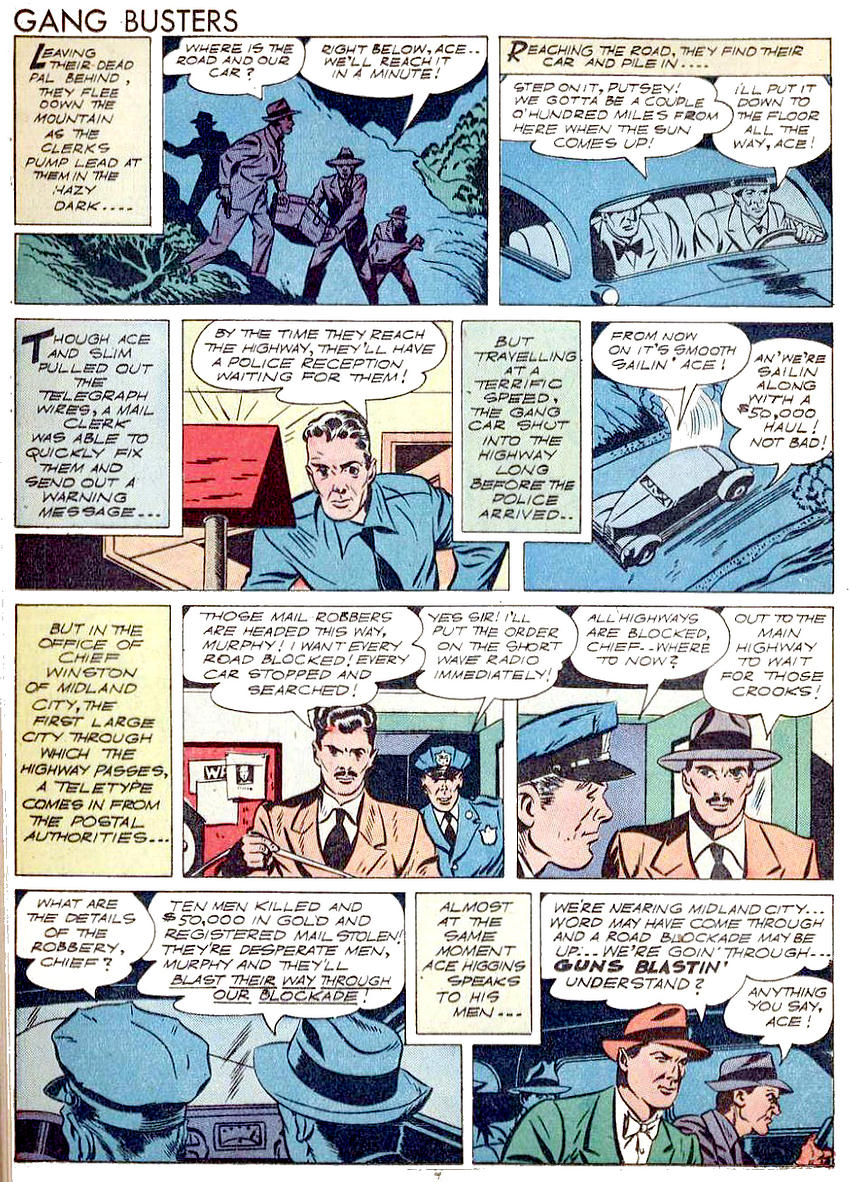 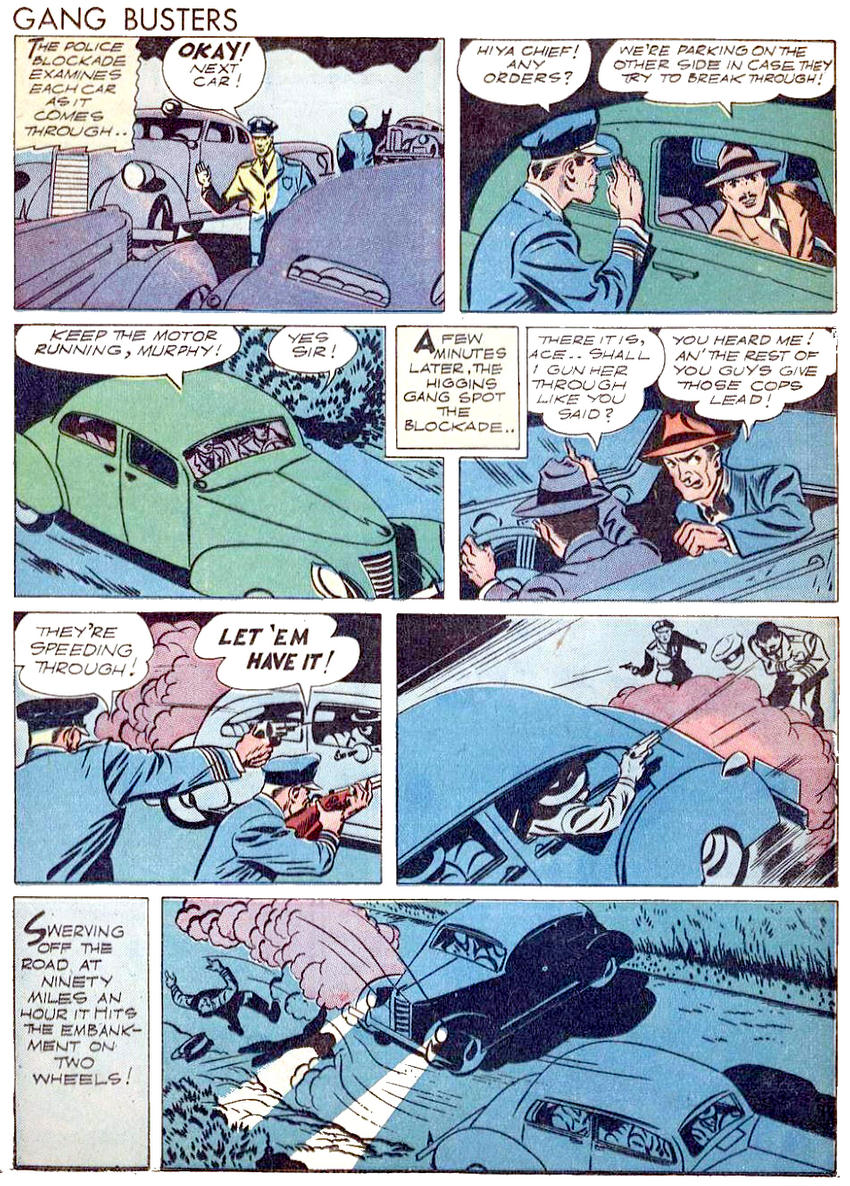 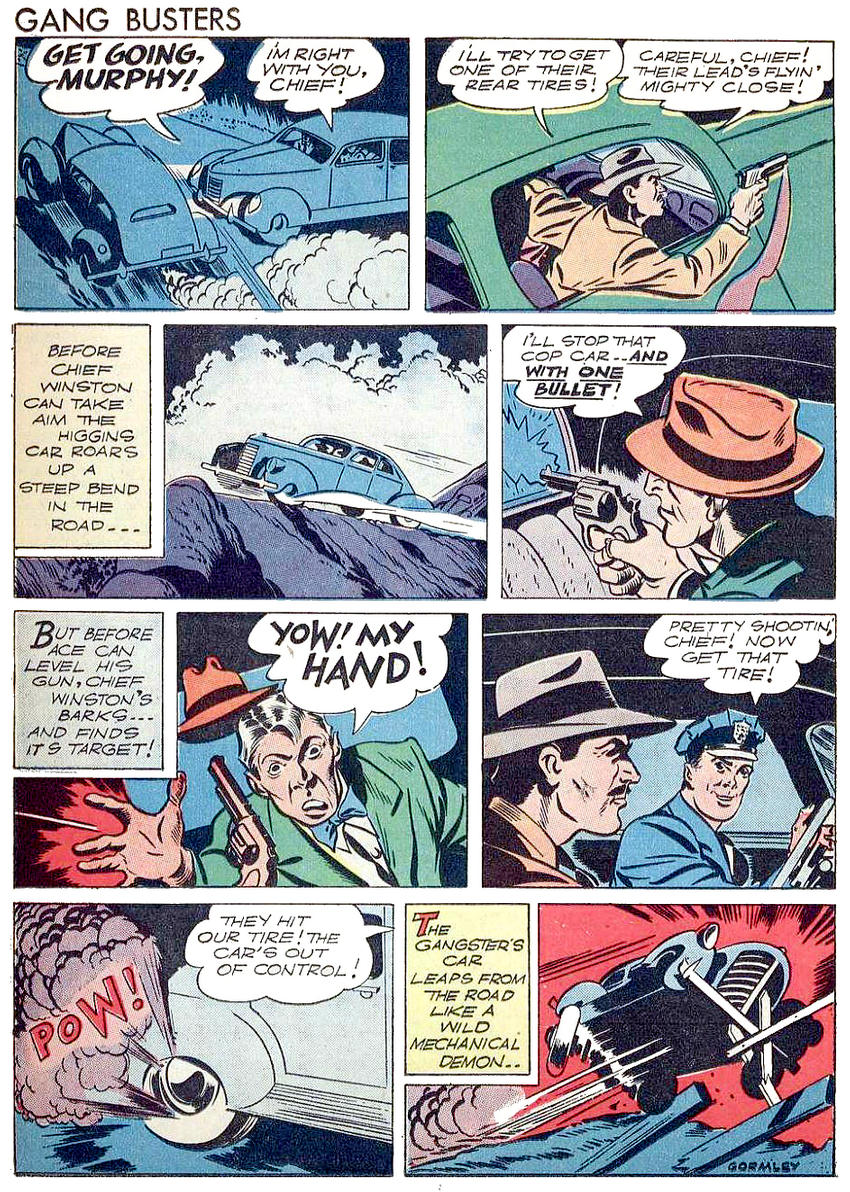 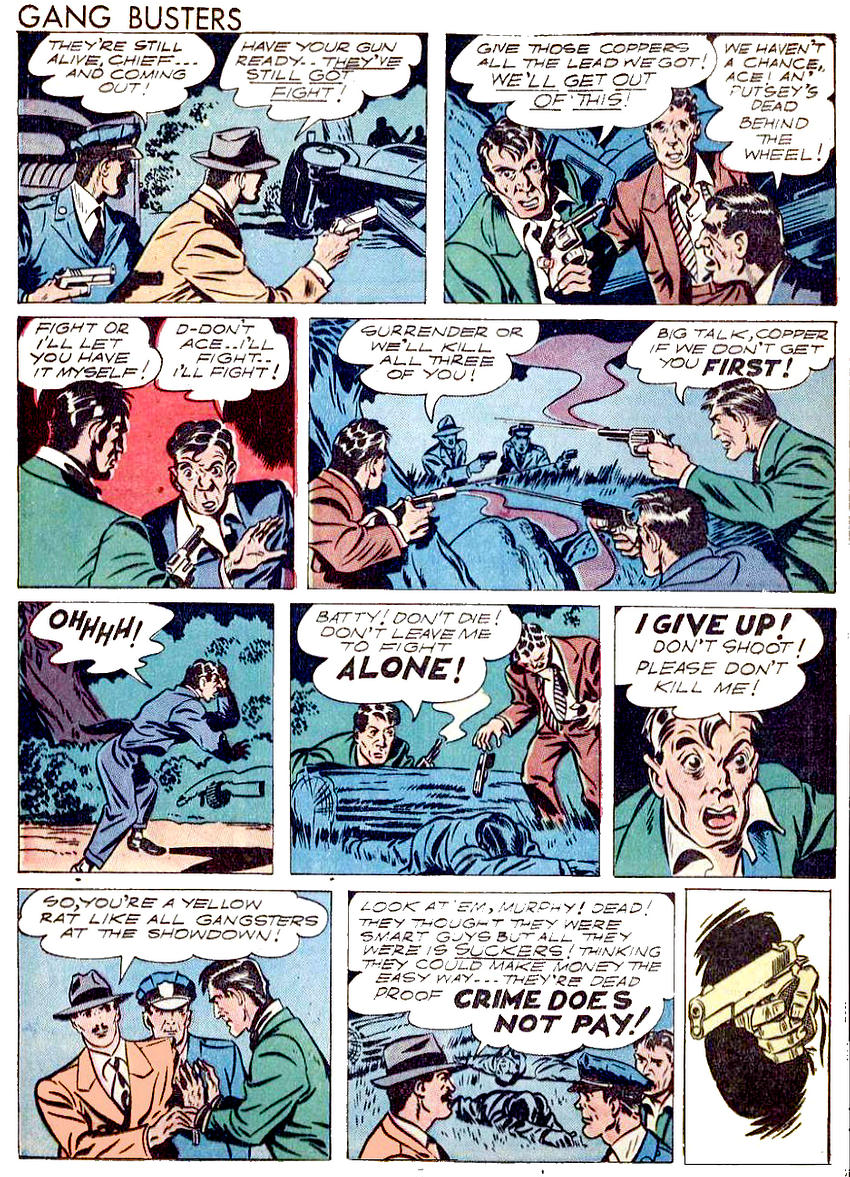 My one other Dan Gormley posting. Just click on the thumbnail. 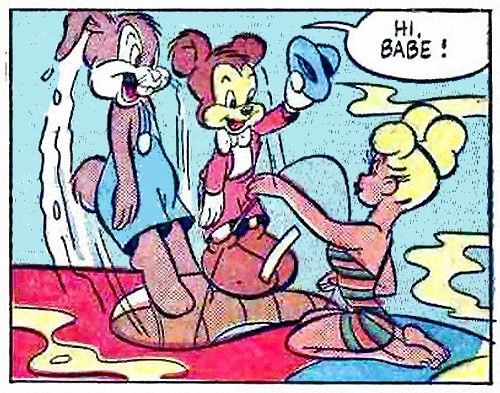 YOW! That was primitive! I especially noticed the underlining for emphasis, and that some of the narrative panes are bordered like separate panels (as would have been more common a few years earlier).

In the years since I first became familiar with the old crime comics, and with Dr Wertham's indictment thereof, I've heard a great deal more of old radio crime drama. And it seems to me that the comic-book editors might just as well have been handing old radio scripts to their artists, with the instruction “Draw this!” Of course, the look of things was now presented, and might (or might not) have been worse than listeners had imagined. But there's lots of violence, someone dies in almost every story, and the lives of security guards aren't worth a plugged nickel. Had all crime comics been ostensible adaptations of radio shows, then the resolution might have been in some way different.

Crime comics is fascinating stuff... and even more when connected to radio broadcasts. Really give that "old times" feeling. I started with Jack Cole's reprints in the 80's ("Murder, Morphine and Me"...)and now I'm totally into it... at least the Murder Ring's chief is NOT italian...
Frustrating when you can't spot an author, ain't it? I was discussing it yesterday with an italian blogger who posted some interesting highlights on Timely comics. Did Larry Antonette actually wrote "Monako Prince of magic" or was he just a penciler?
I'll have to live without the answer! But one thing I know: "Crime does not pay! (or does it?" :-)

According to the Comic Book Database, Gormley did adventure and war stories as well as funny animal tales (tails?). Besides stuff like "Our Gang," "Looney Tunes," "Nancy," and "Gerald McBoing Boing," he also drew "Captain Midnight" and contributed to "The Arrow" comic book. He took a hiatus in the mid 40s and returned to the biz after the war, when it seems he concentrated on the funny stuff. And he did work with John Stanley, so maybe you're right about Stanley writing these two crime stories, Pap.

Daniel, it could well be that the comics were adapted from the radio scripts. Radio, at least, is a spoken medium, unlike the visuals of comics, so more exposition is necessary to set the scene. Even comics that weren't directly from radio programs could have been highly influenced by radio, causing comic book writers to add unnecessary captions and dialogue, telling us what we already seeing.

I remember the "lives of security guards" observation was also made in the 1970s (in TV Guide, if memory serves), when there were all those cop shows filling the airwaves...you know, like now.

J D, so tell me...is a television program like The Sopranos shown in Italy? The lobbying efforts of Italian-American groups on Hollywood stereotyping may be working; I now see more movies using the Russian Mafia as villains. That is when the villains aren't terrorist jihadists.

I don't know much more about Larry Antoinette than you do, but wouldn't that be a terrible name to have? I wonder how often he got called "Marie"?

Ryan, Daniel reminded me of the radio connection, so perhaps John Stanley could have been adapting radio scripts for the comics. And maybe he was slipping in the YOW! exclamations so grown men over 70 years later would be talking about it?

Thanks for the information on Gormley. He was versatile, but I'm not sure what happened to him. I think information on him after he left comics is sparse.

I had totally forgotten he drew in Ernie Bushmiller's style to draw Nancy, so I have shown more Gormley than I thought, especially in the very early years of this blog. For what it's worth, I think his collaboration with Stanley on that particular strip is great.

We had "the Sopranos". I guess it was a depiction of "nice Mafiosi" in "the Godfather" style, but I can't tell you if it was a big hit. Got no TV anymore since the Digital broadcast system entered in 2012. I still got my CRT tv set (my Cathode Mama) and use it to watch DVDs and old video cassettes. Every country has its own "Mafia", from Japan to Russia, and I guess Russians are on top at this point in history.
Anyway, I think crime/cop shows are generally worsened since the days of Hill Street Blues (that I endlessly re-watch on cassette). I can't stand "Blue Bloods" for instance.

The name of the guy was "Antonette", with no "i", but I guess he had problems with mockery during his life, as he also used pseudonyms to write John Steele on "Daring Mystery"...

J D, thanks for correcting me on the spelling of Antonette. In checking around, I see I am not the only person who has misspelled it as Antoinette, but I will make it a point to spell his name correctly from now on.

Back to your question, I have never seen Monako Prince of Magic, so I don't know.