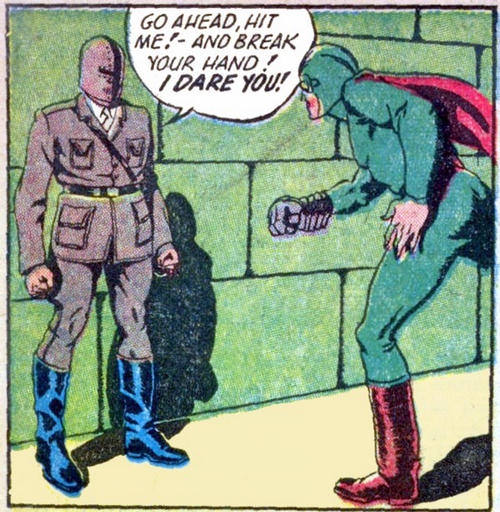 The Man In the Iron Mask...not the Alexandre Dumas Man In the Iron Mask, but a musician who fails to salute Hitler, and gets a metal helmet locked on his dome for his offense. (Some people, including evil despots, just don’t cut anyone any slack.) Not only does the musician become a metal-head, he is ordered to America to kill...Spy Smasher!

This is one of those goofy stories from three-fourths of a century ago. The story moves right along. But everything that happens in this story, including the Man In the Iron Mask putting an iron mask on Spy Smasher, is totally unbelievable. What else would you expect with a set-up like this story has? Spy Smasher, who shared Whiz Comics with Captain Marvel, has no super powers. I guess it is just good luck — and the Man In the Iron Mask stupidly leaving the room where Spy Smasher is tied up with a flaming torch roasting his head — that gives him the advantage. (Why do villains give their victims a chance to escape? Why do I foolishly ask rhetorical questions?)

If you can’t accept the story, at least you can appreciate the artwork, attributed to Emil Gershwin. From Spy Smasher #4 (1942): 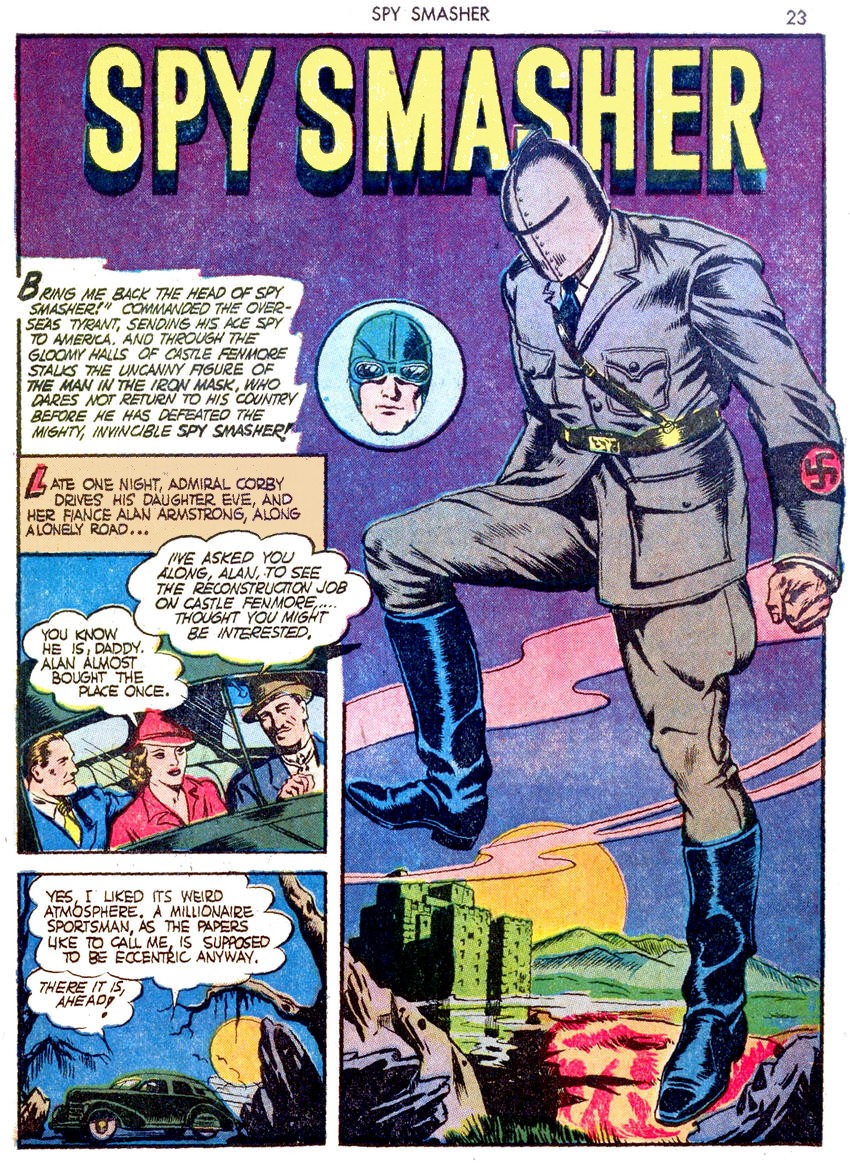 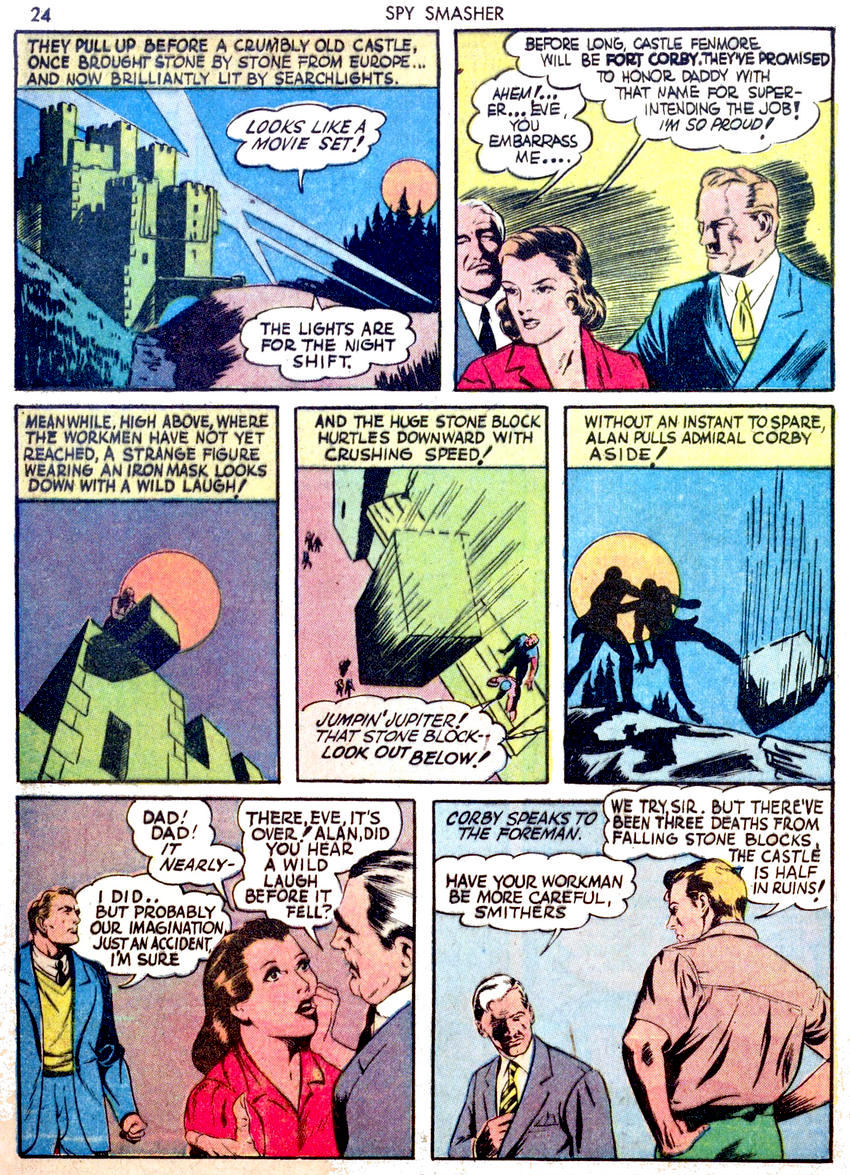 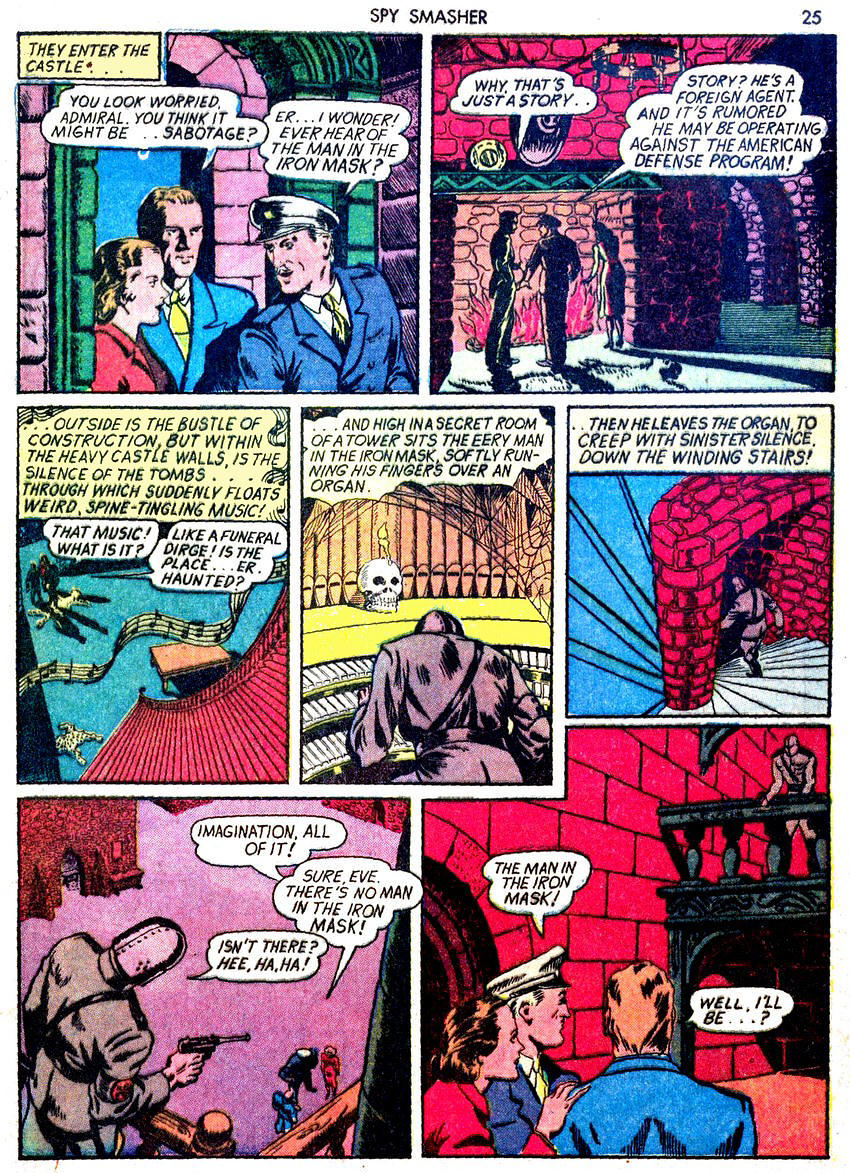 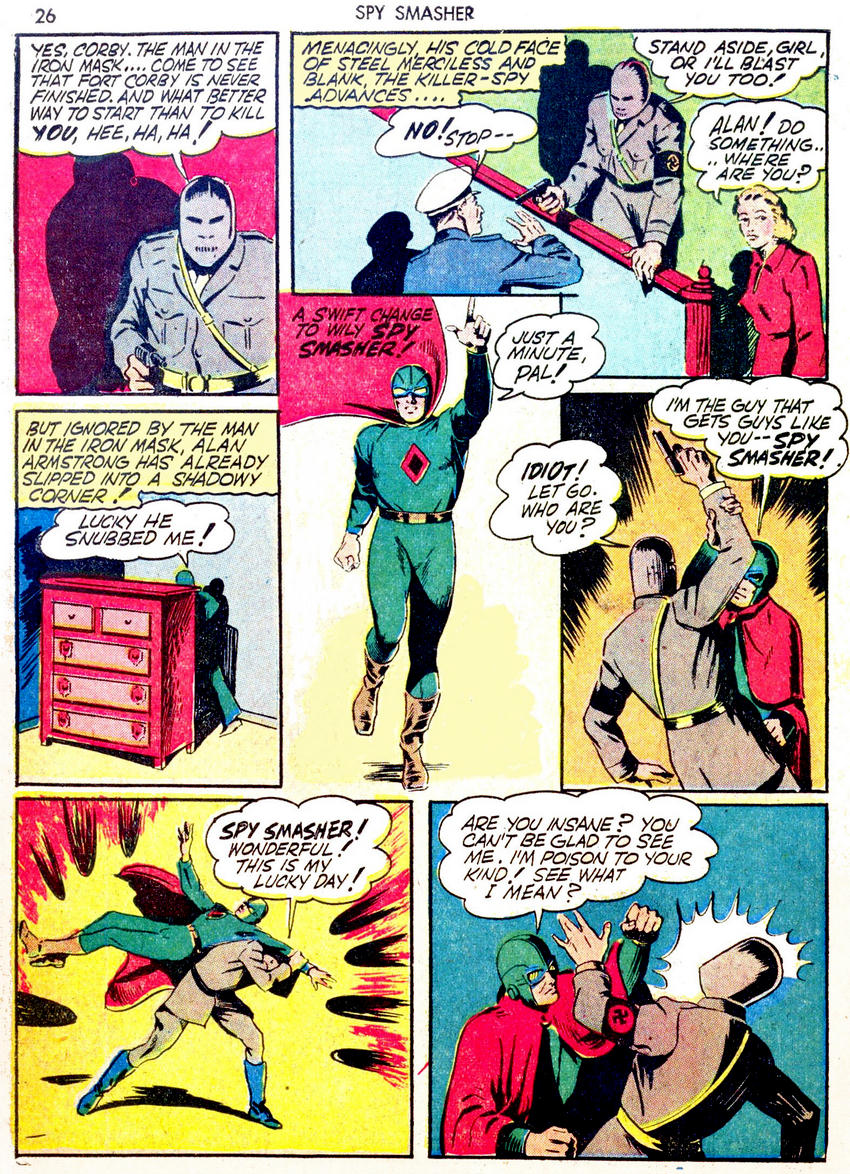 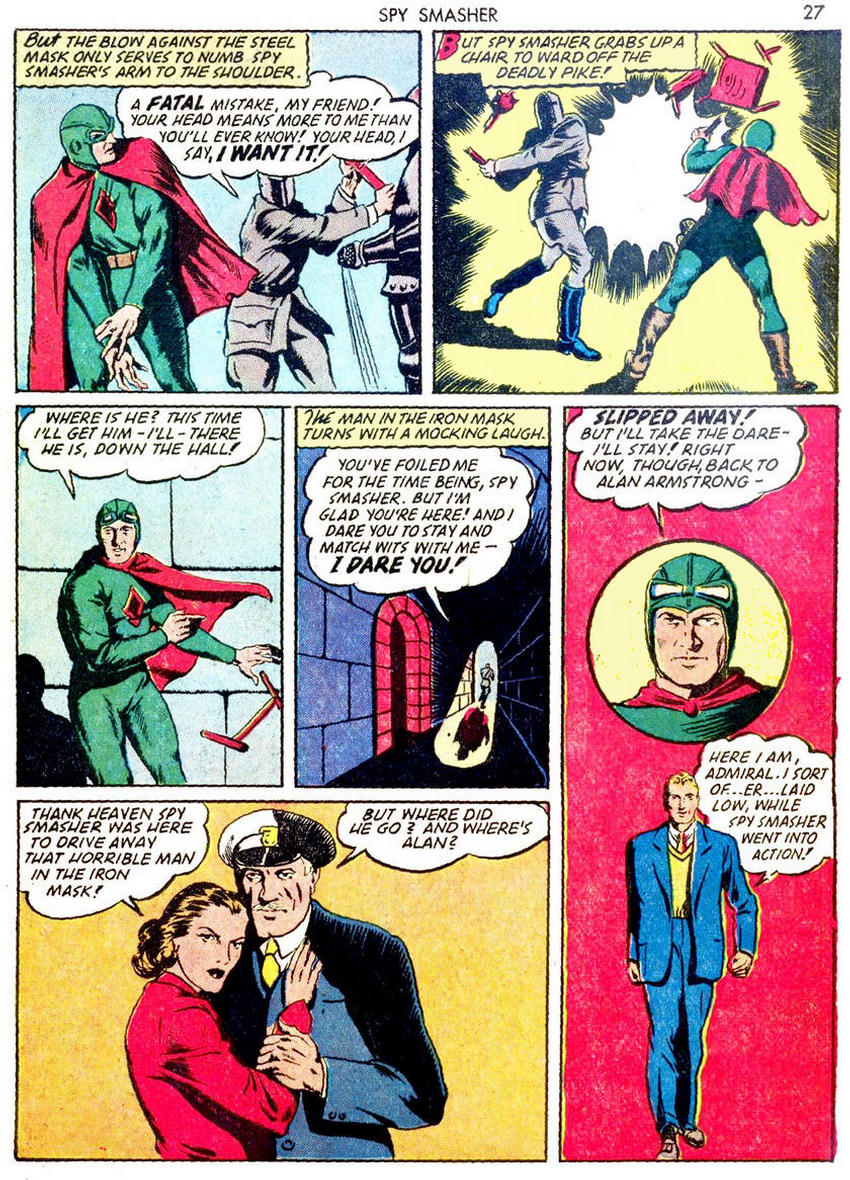 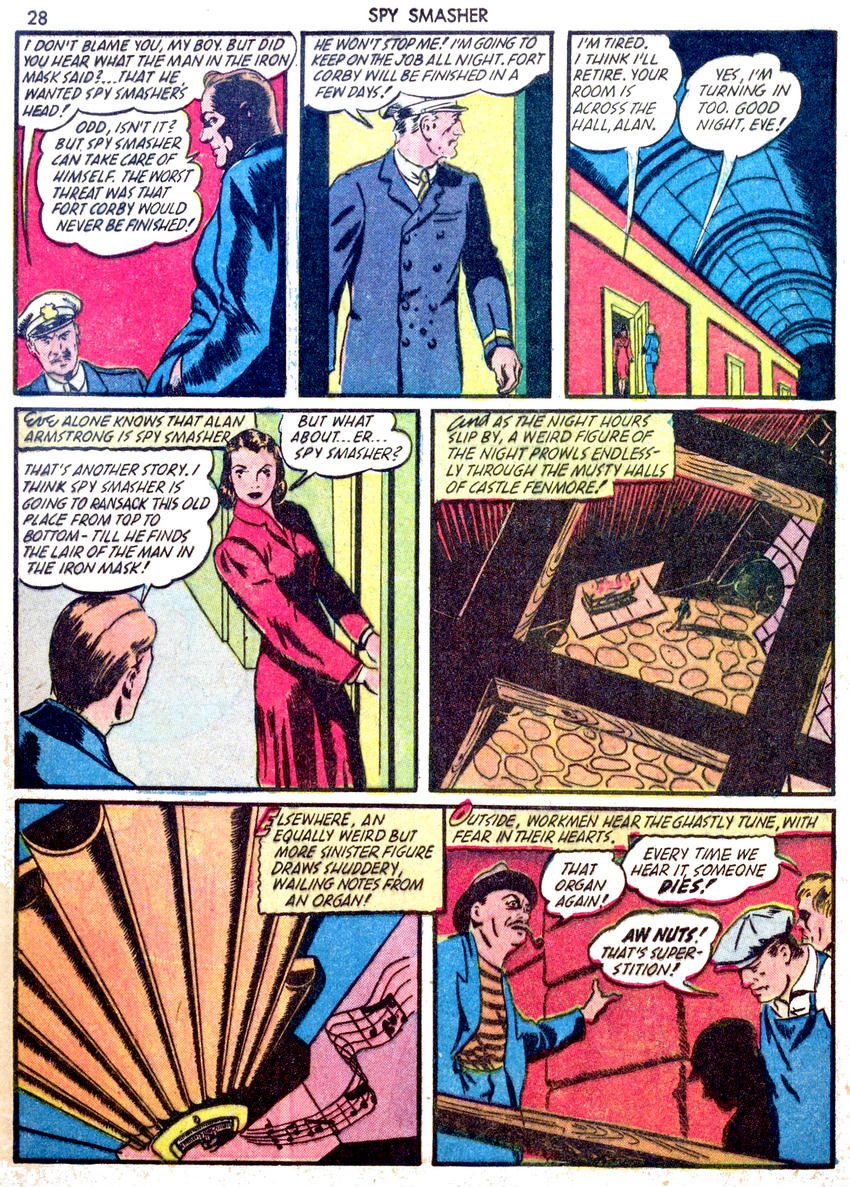 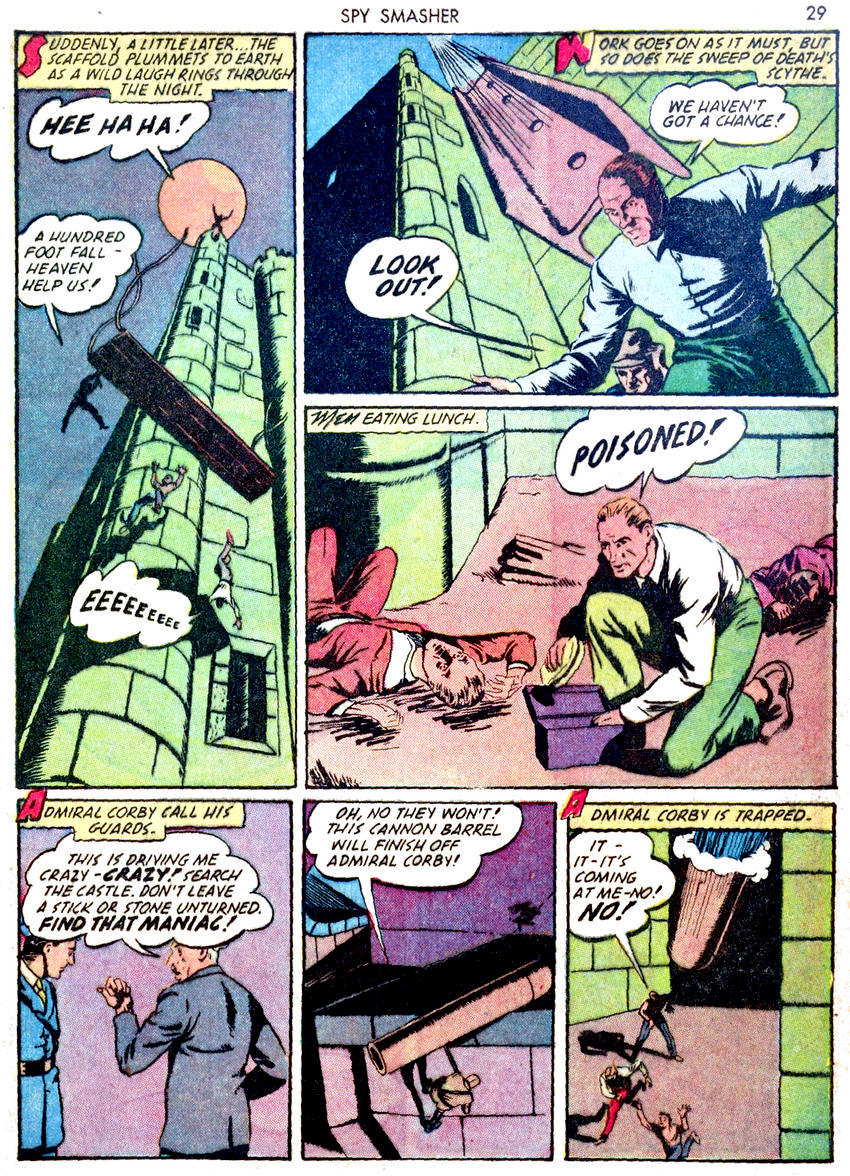 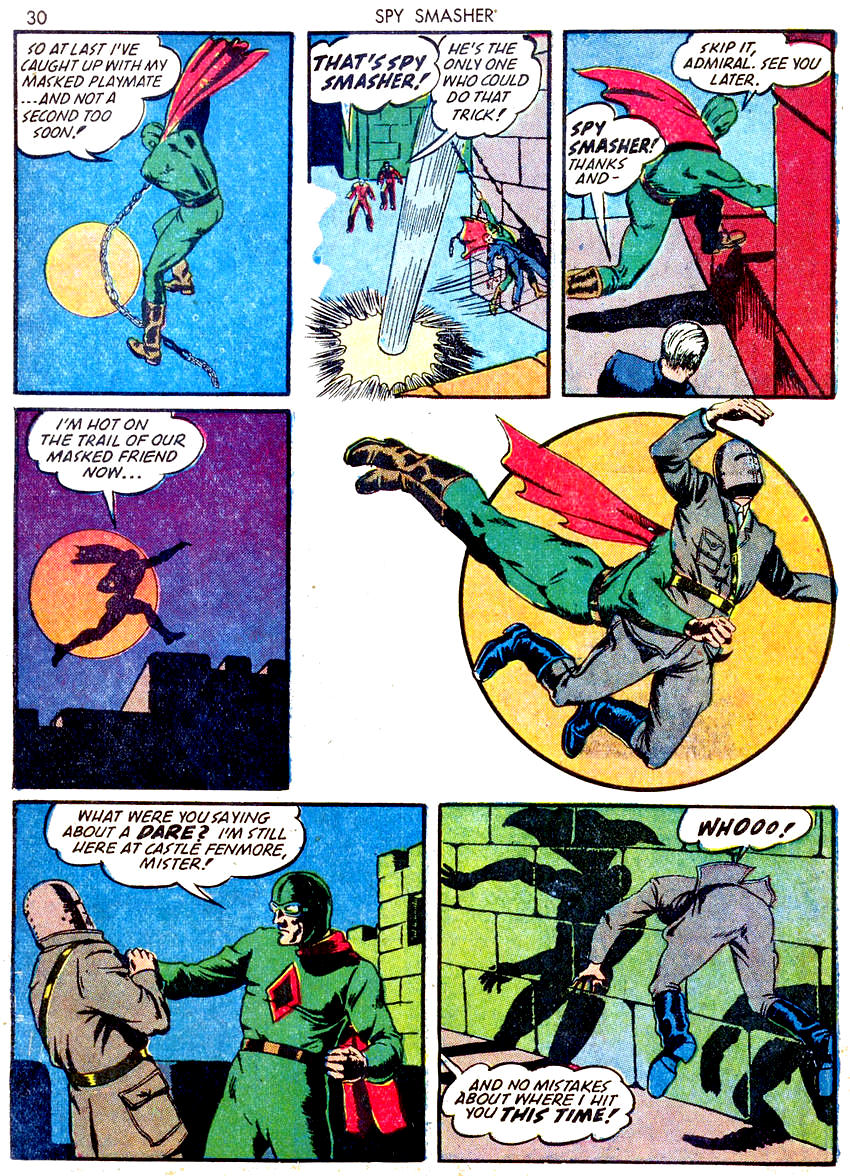 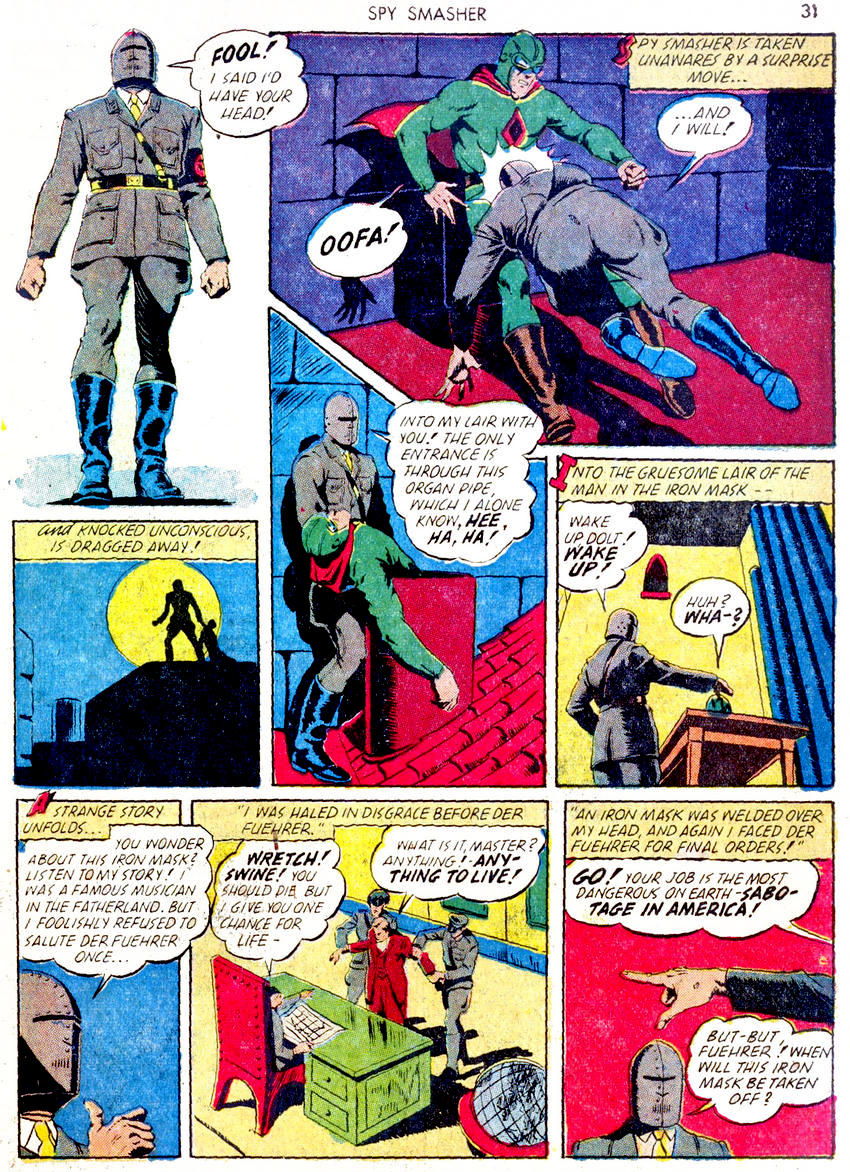 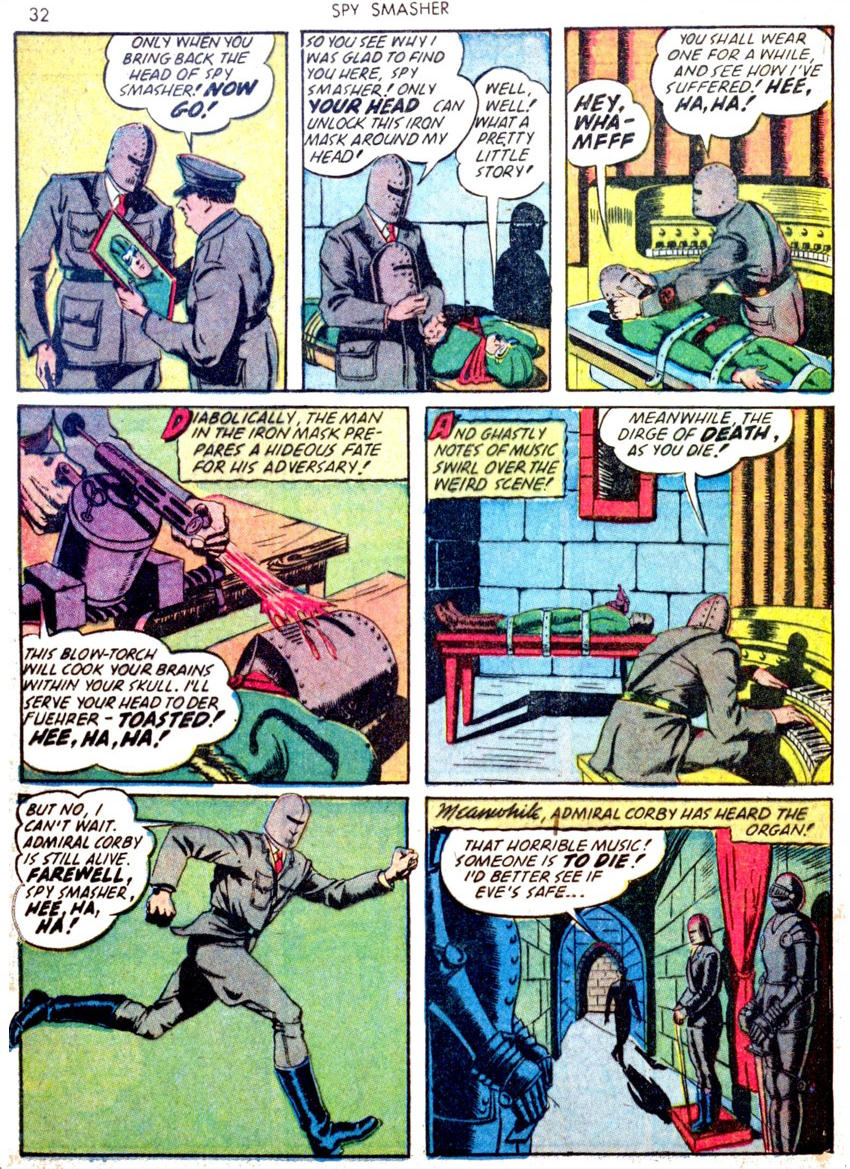 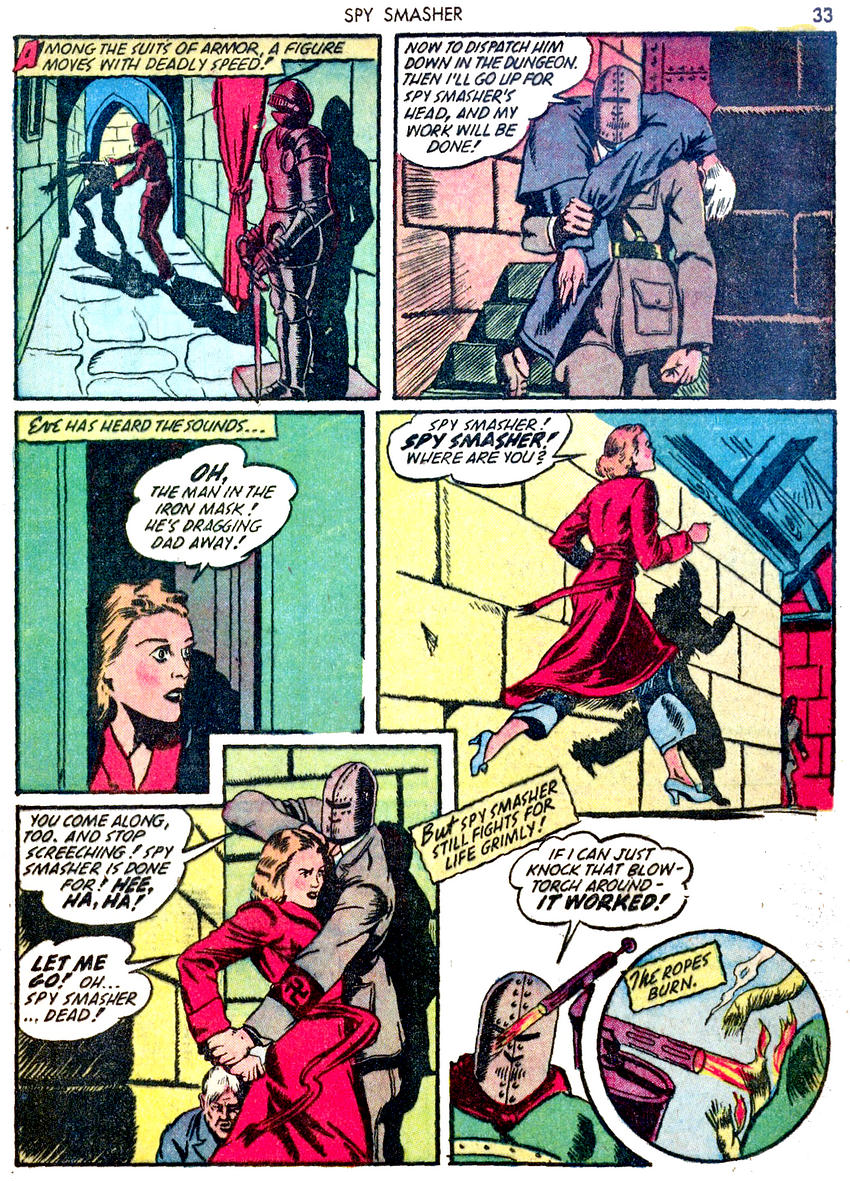 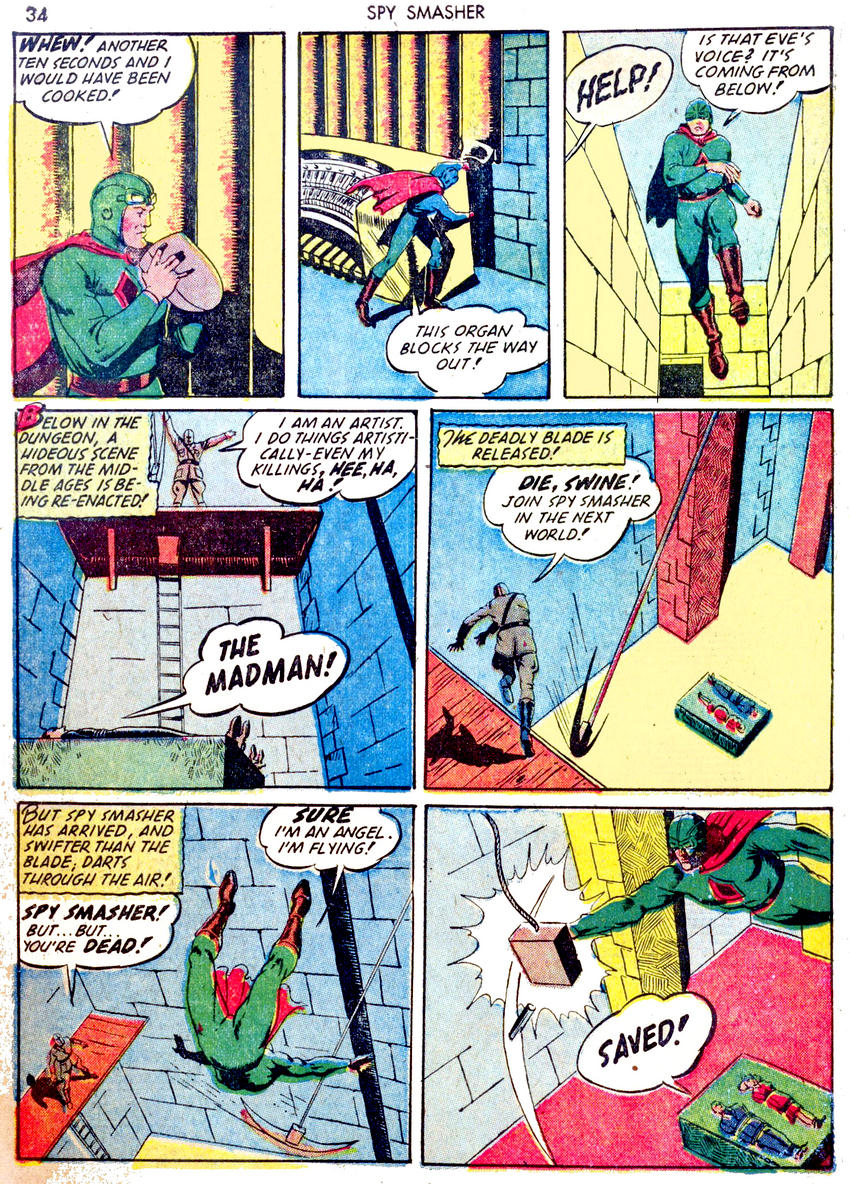 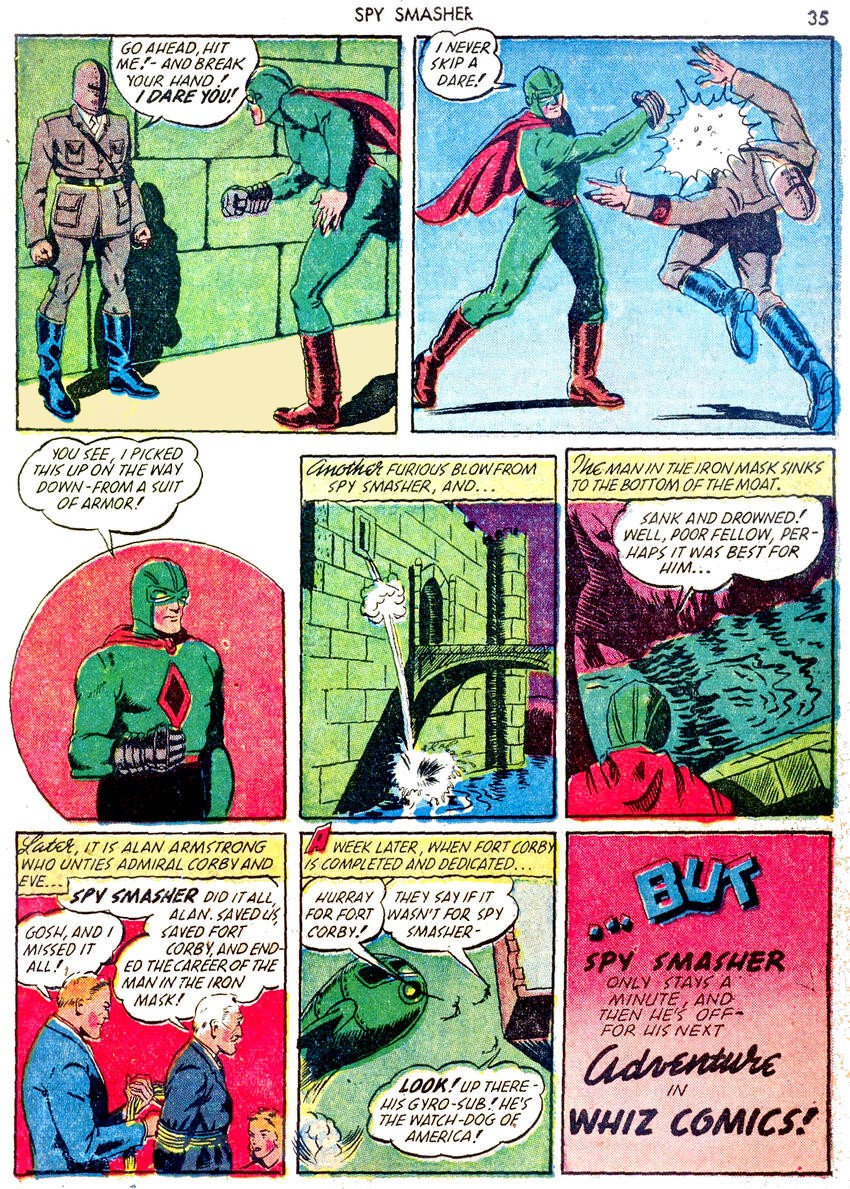 Yes, fine art, complete nonsensical writings. Even from a narrative point of view a good spy, I guess, is one who can keep a low profile and blend into the environment to get informations, or accomplish his mission wathever it is. We have a guy with a cute uniform and an iron mask, so either the writer or Adolf Hitler is a complete dork. And then it gets even more silly...
Plus, I don't know if nazis are worst than those "millionaire sportsmen" who buy castles just like hot dogs and pompously lecture their workers.

This is, typically, one comic I like for it gives me the taste of its time, as we have Nazis, 40's cars, silly costumes and dumb girls. It's like an old cliffhanger film serial. The last one with the detective and the cat was more anonymous, so less enjoyable, aside from Ingels' art.

Hee ha ha! There's just too much s--t in this one to pick at, point out, question, and ridicule...so I won't even start. But the art is nice.

In Floyd Gottfredson's famous 'Mickey Mouse' continuity "The Phantom Blot," the villain kept tying Mickey to overly elaborate death traps and then leaving. After Mickey escaped several times, the frustrated Phantom decided to stick around and watch till the end. But Mickey still got out of it.

I don't know, "watch dog of America" doesn't sound like such a great job. But if you get to drive the gyro-sub and wear those cool duds and goggles, maybe it's okay. Nice art, yes.

Sorry I haven't been around for a while Pappy! Only time to read!

OK, Spy Smasher changing behind the dresser like a little mouse is one of the most embarrassing things I've seen a superhero do!

There's a famous nazi sabotage ring that failed to blow up anything, because when they got to America, relatively untouched by war, they decided to live it up instead of blow it up. Now, if Hitler (not mentioned!) welded a bucket to my head and then sent me to America, I think it'd be the time to turn double agent!

Hi Pappy,
I wonder if the Man in the Iron Mask was supposed to be Fawcett's version of Marvel's Red Skull (April 1942 vs. March 1941)? OTOH, Spy Smasher had a foe named The Mask from #2 to #15, so perhaps too similar.
Thanks!

Brian, you get a pass for not writing, since I know you're busy with your comedy series on YouTube. (As of this writing, Brian has done 42 episodes of his Your Final Answer. Check it out! https://youtu.be/IUfmT3NIgfw

Darci, I don't know, but we know that people who produce comic books would steal ideas from other popular comics.

Whatever the intention, I think this villain — and especially his origin — was a weak concept.

Since I am a comics fan who likes old comics in general, rather than totally focusing on superheroes, I stubbornly post non-superhero comics as well. I have re-thought that strategy several times as I study my blog visitors statistics. But when it comes down to it, I work to entertain myself first. Otherwise I would get bored.

Ryan, funny you should mention that Mickey Mouse and the Phantom Blot continuity. I first read it in a Dell Giant Comic in the fifties, and as young as I was, my thoughts at the time were, "Why doesn't the Blot just shoot Mickey?" You can tell I didn't quite get the essence of suspense, and that I didn't understand that killing the hero on the first page limits a writer's ability to concoct a story to follow.

A deferred death is part of heroic fiction and storytelling. Kind of a Mickey Mouse way of constructing a story, illogical or not.

7f7, from "watch dog of America," in the late forties Spy Smasher had to step down from that elevated position, and become Crime Smasher. It did not have that ring, and after World War II Spy Smasher was still needed. Maybe he needed a break from the heavy responsibility of being a watch dog against foreign enemies, and concentrated on domestic ones. At any rate, Crime Smasher flopped.

I think your strategy is just fine. Comics are a lot like life: can be incredibly silly and unexpectedly deep. I love your Frankenstein and Pogo posts, and some sci-fi stories were poetic enough to make me shed a tear. I laugh like a raving madman with Spysmasher and drool with the Valkyrie. Always I learn something. I'm a 21st Century Schizoid Man.

P.S.: Brian's right, actually some of the Nazi's sabotage plots are more improbable than this comic, and some of their agents were definitely sillier than the Mask.
I guess he's referring to Operation Pastorius (arranged by the Abwehr) or Operation Magpie (developed by the S.S.). These guys acting is just too stupid, and this is strange, for if Canaris could have been doubtful and not exactly overzealous in 1942, the S.S. (S.D.) still had excellent planners after Heydrich's death (e.g. Walter Schellenberg, who had been also a Bond-style operative). So maybe life is just a silly Golden Age comic.