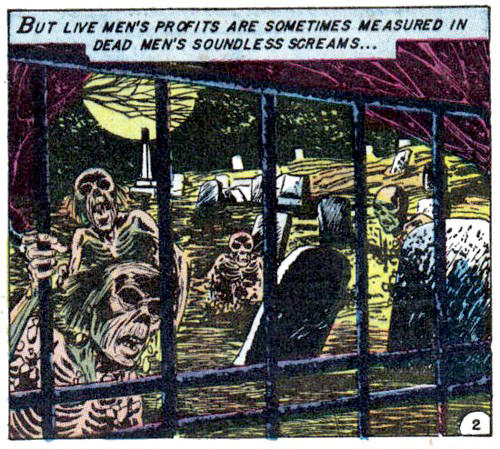 Over the past few years I have read several news stories about funeral homes and crematories that cheat customers. Overcharging for cheaply built coffins, and worse. There was a story of a Georgia crematory where unburned bodies were stacked up in nearby woods. Another story from Baltimore tells of 40 bodies in a garage. Gee, makes me not want to die if I’m going to be treated like that. I thought at the time those stories would make good horror comics material. And they have. The Beyond #25 (1954) has a story about the dead coming back to life because of the shoddy caskets they have been given to lie in. I am fairly certain that corpses rising from the dead notwithstanding, in real life thievery of the living who are paying to honor their beloved dead has gone on many, many times. 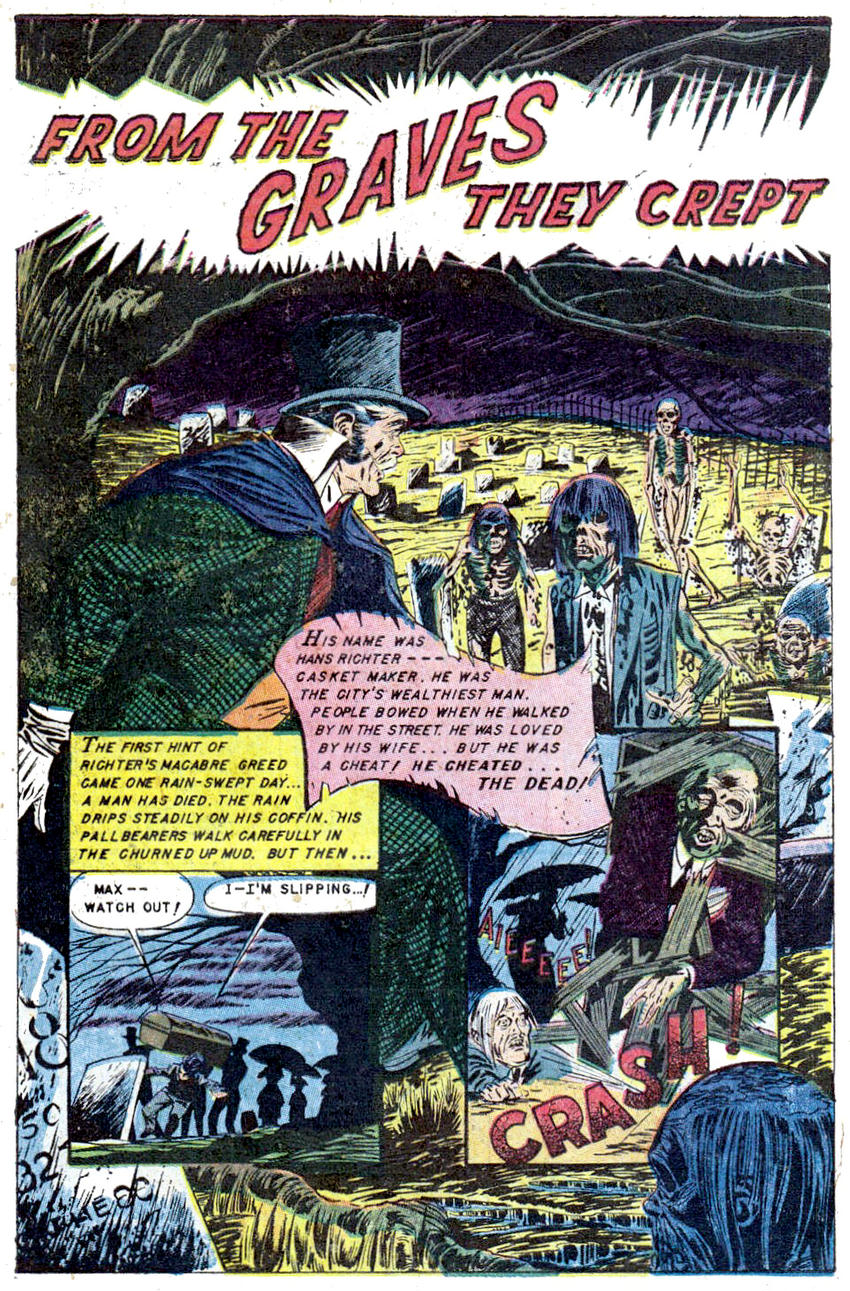 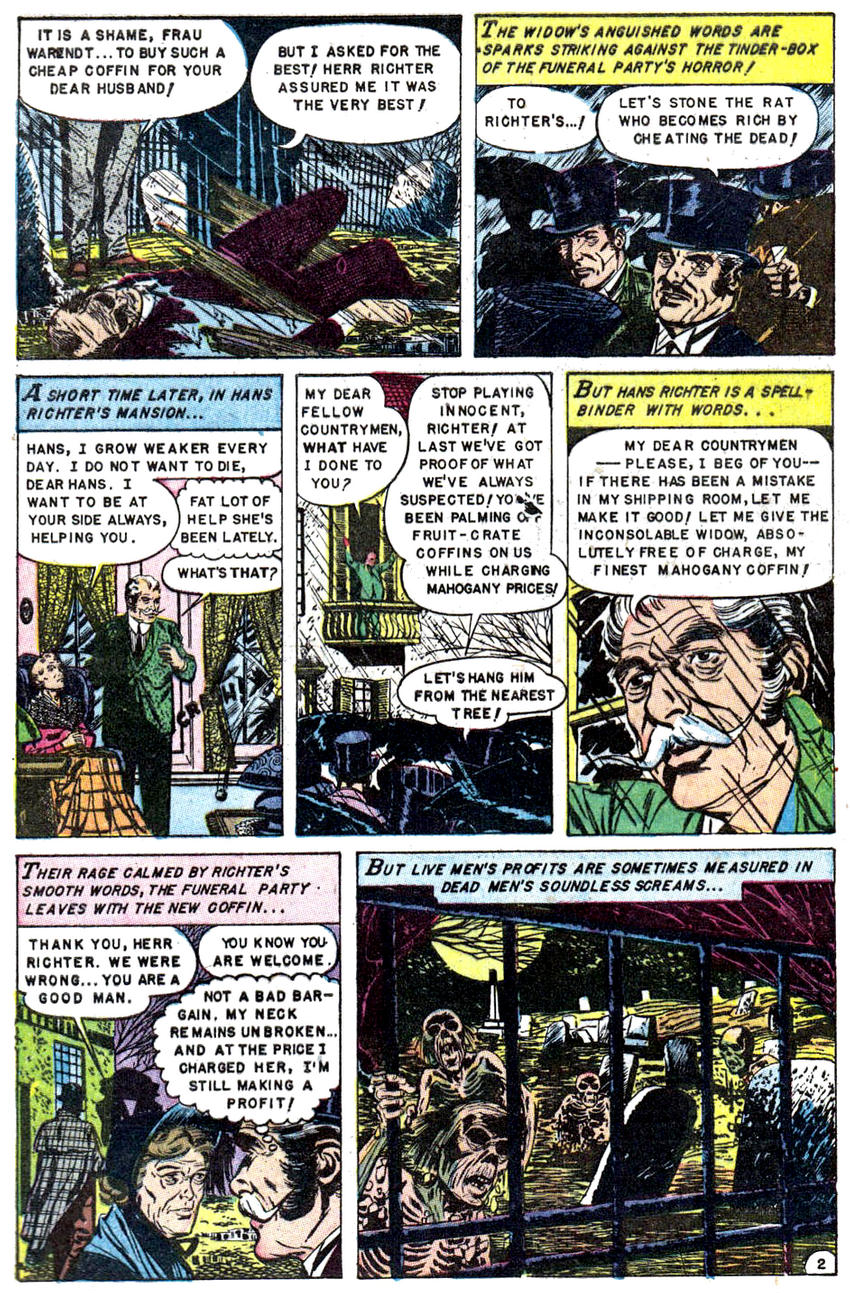 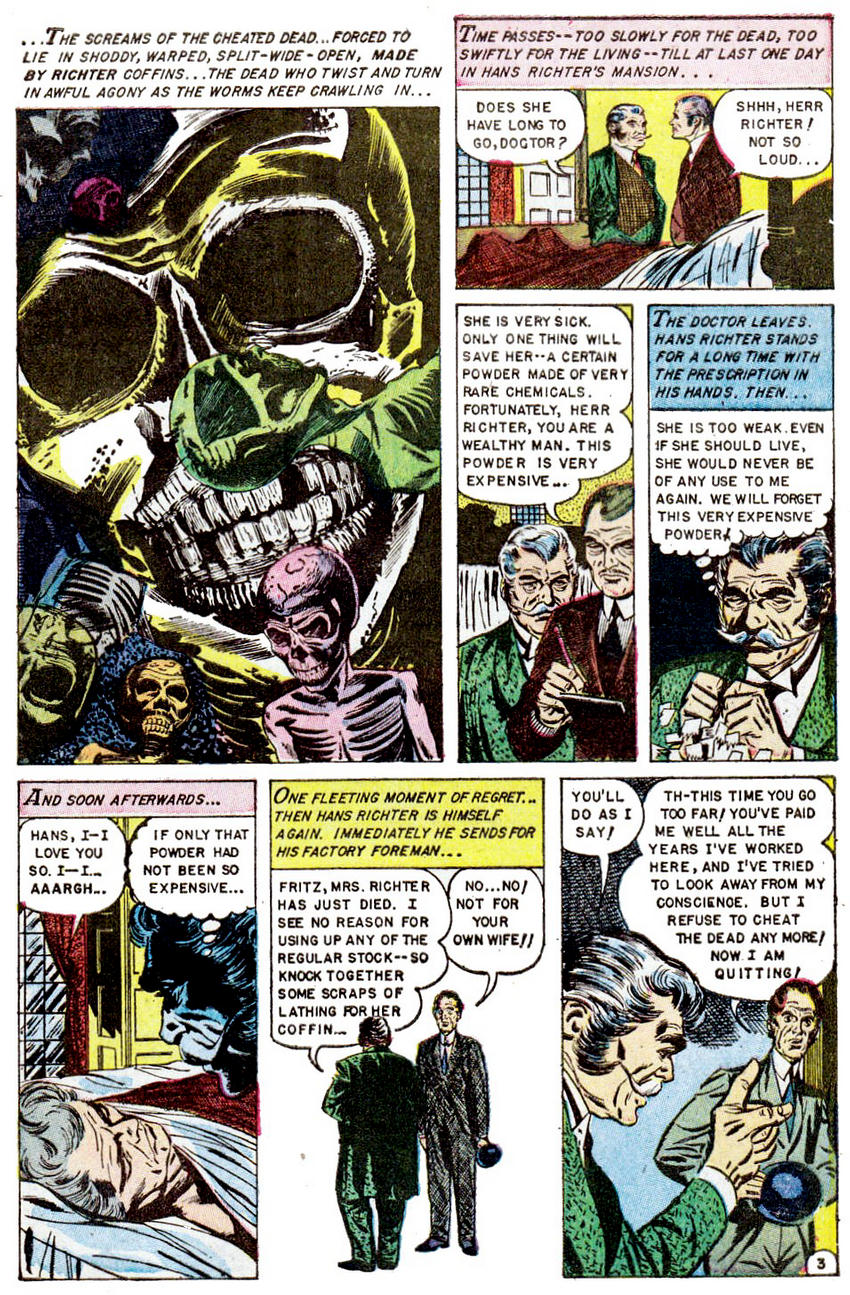 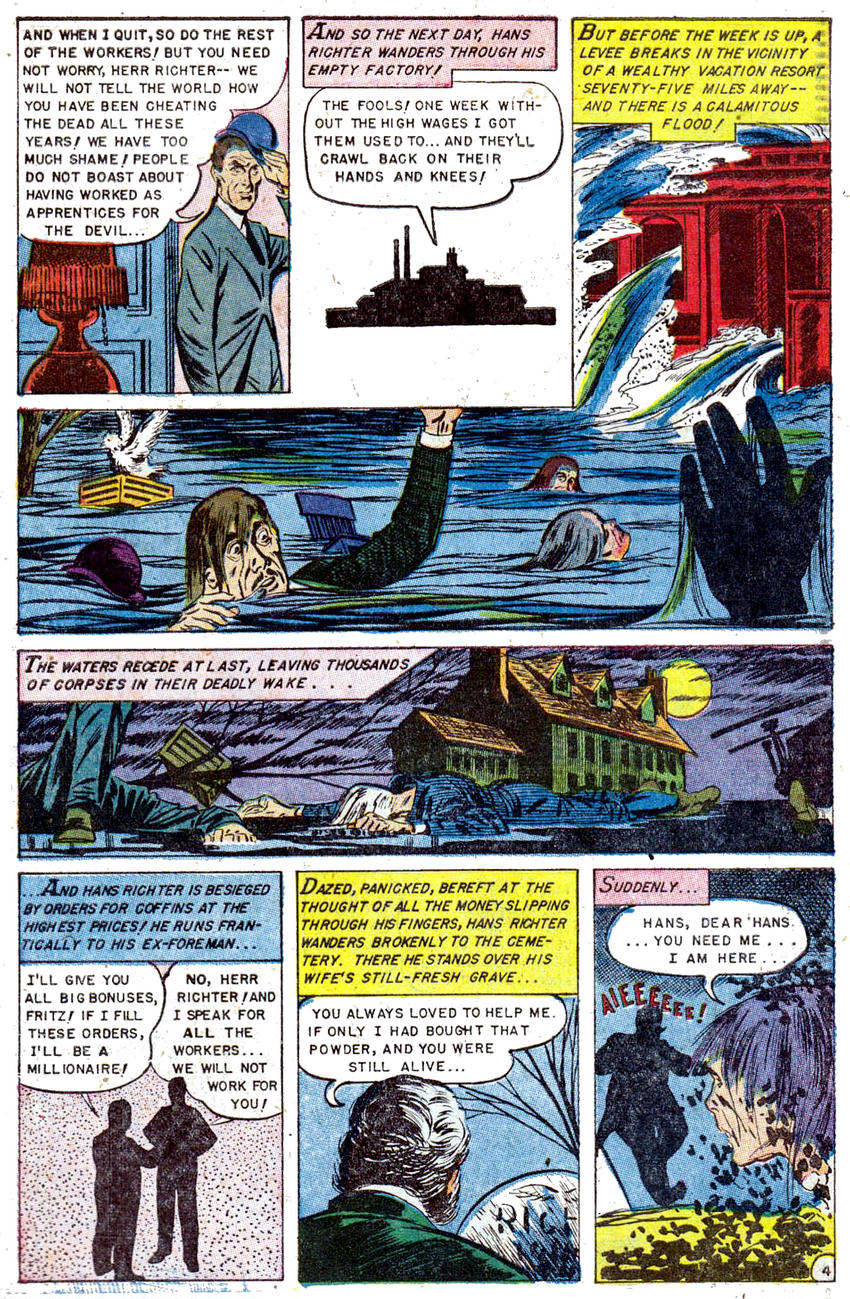 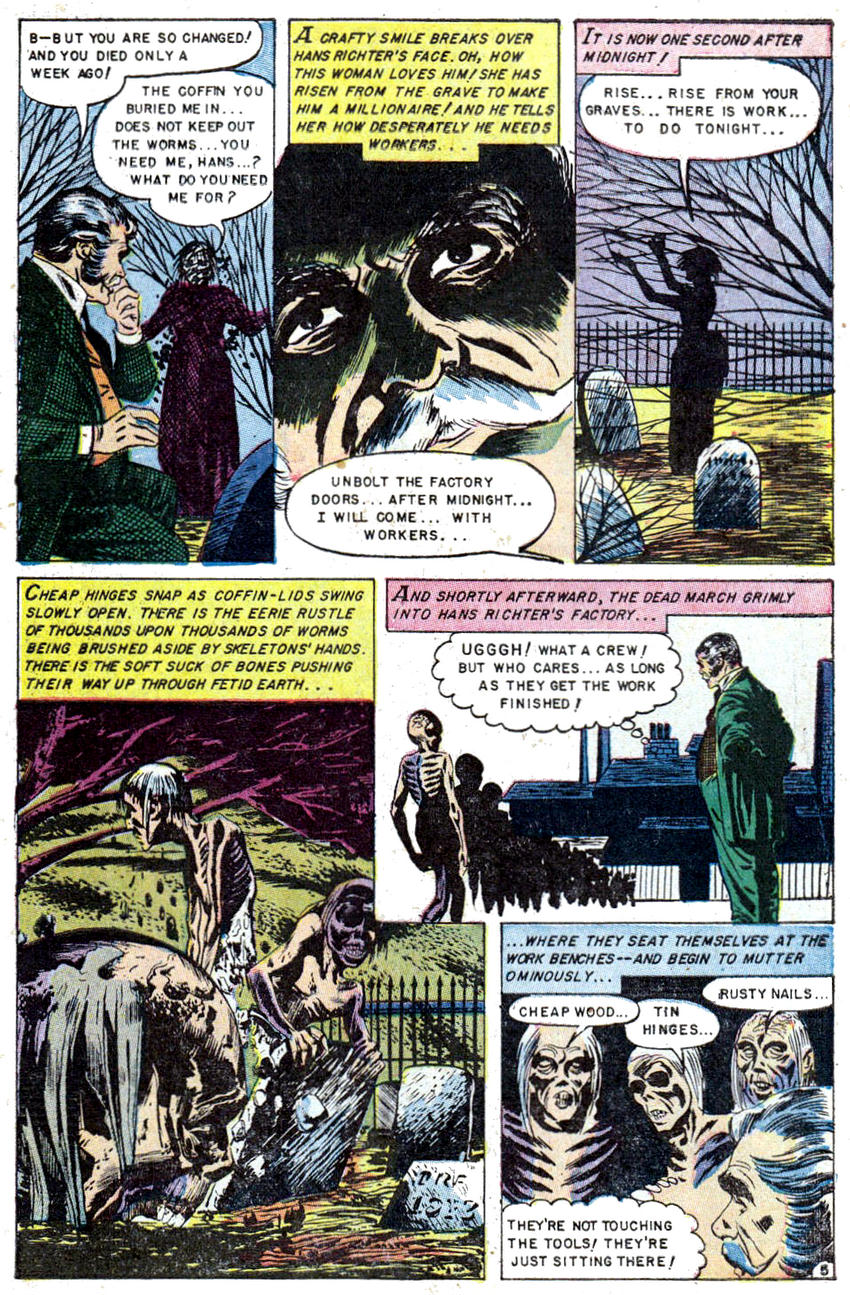 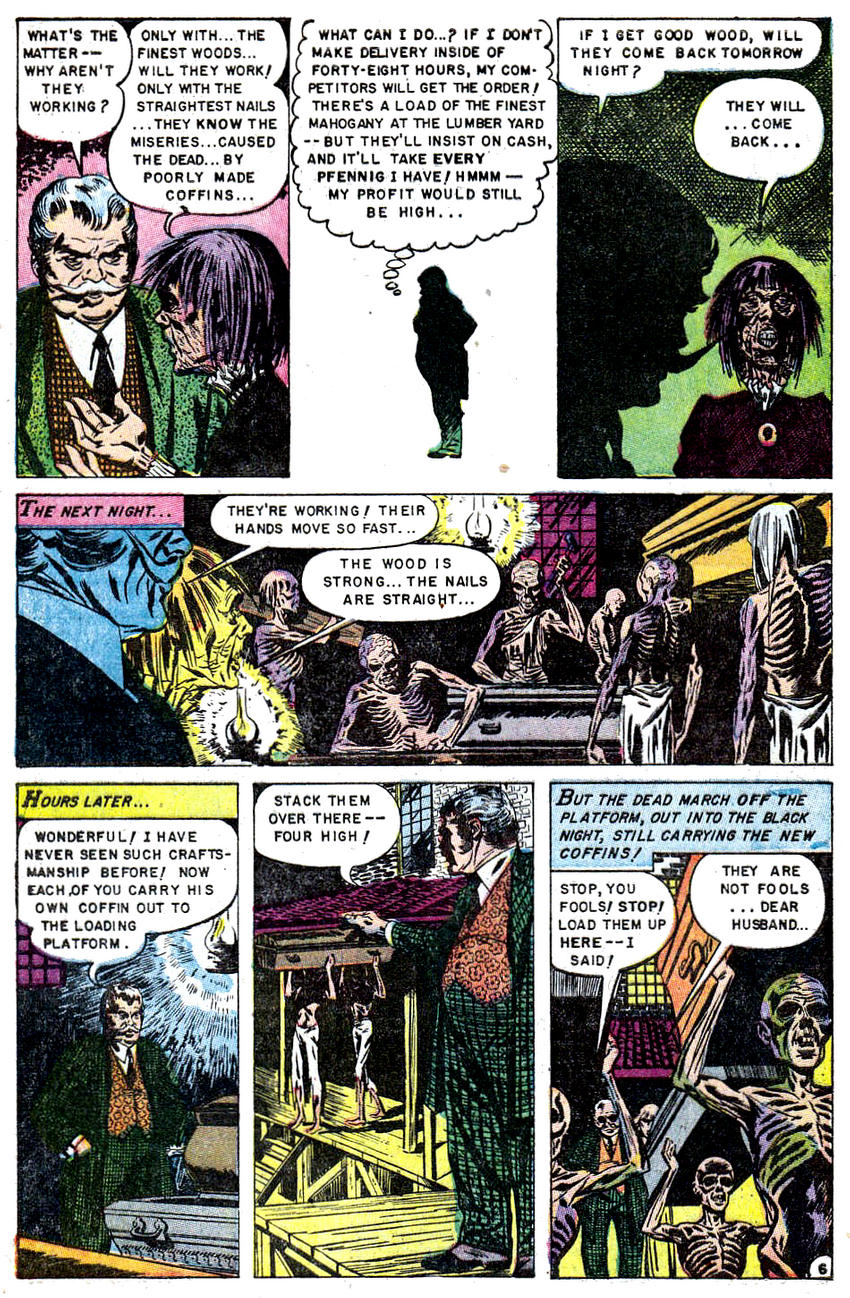 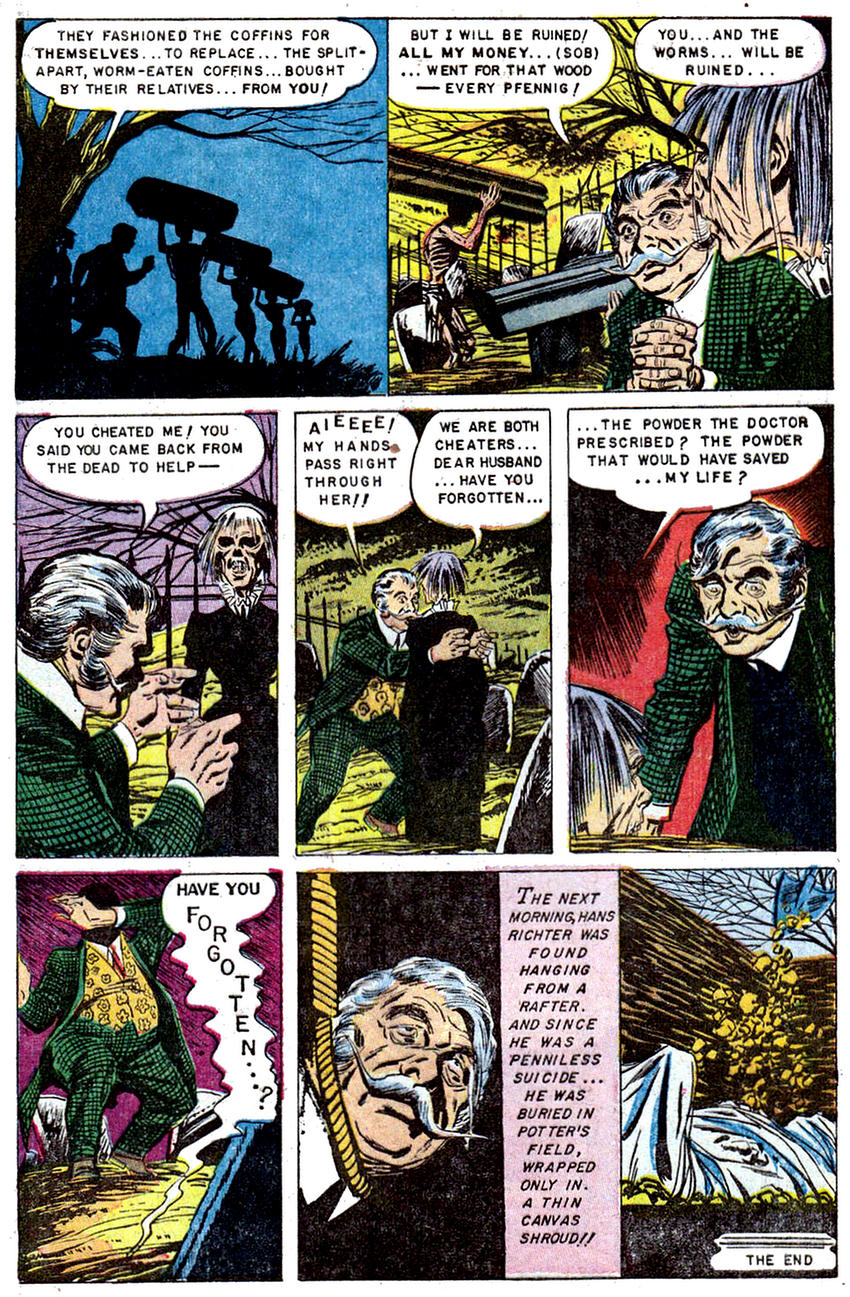 The thing about horror comics, generally, is being dead is so much trouble. It's heck, I tell you. That the rotten corpses built themselves better coffins strikes me as less unbelievable than Herr Richter hanging himself for losing his money. He saw the trouble being dead was, he should have set off as a penniless searcher of Florida swamps for the Fountain of Youth. Failing finding that, he might get in just the right ooze and become a swamp thing critter which wouldn't be as bad as dying in his own home town. Just saying.

Cute story. I'd call it "mannerist", for cheating or robbing or mocking the dead is a recurring theme in old horror comics (many E.C. stories come to my mind).
And you say you've actually read in the newspapers that some bastards really DID it? Were they inspired by old pre-code comics maybe? This could mean Herr Wertham had a point... or we should put the blame on the great Lovecraft's story "In the Vault" (1925).
Oh no, no! I don't think Lovecraft is to blame, really. You hear, HPL? Please, don't do anything stupid tonight...

Who knew that the dead were so picky?

One of the reasons that the EC horror comics stand-out so clearly is that they are most often amongst those about supernatural justice. Much of the stuff to come from, say, the Eiger shop was just random supernatural bad stuff.

The theme of supernatural justice works best exactly for tales of offenses that would otherwise go unpunished or inadequately punished. Bank robbery is a poor candidate for such an offense, as most bank robbers are quickly apprehended. Undetectable crimes, or things that upset the reader without in fact being crimes are much better candidates.

Indeed, when offenders are less often caught and punished, a sense of helplessness compounds the sense of injury and of injustice, and of the degree of punishment one wishes to see imposed. This compounding actually makes some sense as an adaptation, for offenses seldom punished must be punished more severely for would-be offenders to be deterred. But the greater punishment of those caught doesn't relieve the compounded response to those who are not.

Our sense that preying upon the most vulnerable is especially wicked is actually an aspect of that sense that offenses that are more likely to succeed are somehow worse.

Mortuary crimes have just that element — they are largely undetectable (until the corner-cutting becomes extreme), and they injure those less able to protect themselves.

And, on top of that, well, where morticians are involved, there are corpses all about!

This story is rather gentle in its notion of justice. Richter isn't killed or threatened by the corpses — he's conned. They run a sting, and take him for all that he's worth. His death is at his own hands, in response to a loss of material wealth. That moderation undermines the effectiveness of the story.

Additionally, things are wrapped-up too abruptly in the next-to-last panel; and its image is a mere spot illustration for the narration.

Guys, of all of the fantastic and unrealistic things that happen in horror comics, revenge from beyond the grave, in the form of walking corpses, is absolutely never going to happen in real life. Total fantasy. So the old cliché, “Dead men tell no tales” is more true than any of the walking corpse comic book stories. Much as I hate to encourage such conduct, cheat the dead as you will...the dead will not come after you. (Now, the living seeking justice, that's another matter.)

As for me, when considering how to dispose of my dead body when the time comes, and also cheat any potential funereal-type con artists put in charge of my mortal remains, I have decided to get rid of my skanky corpse on a funeral pyre, lying on all of my thousands of comic books. It will make a mighty bonfire. Unlike the other old cliché, “You can’t take it with you,” in my case I am taking it ALL with me.

Someone shall have to write a horror story about the dire fate in the Hereafter of a wicked, wicked man who had all of his comic books destroyed upon his death.

Of course, were Ayn Rand still alive — or perhaps if she were writing in the aforementioned Hereafter — then she'd write the story with your destroying the comic books because you felt that the rest of us were unworthy of them (like Dominique Francon, throwing a statue down the ventilator shaft).

Mrs Pappy has already told me my idea won't work...she'll shove me down the chute into the oven, then call the nearest book dealer to see if he can make her an offer on the whole lot. She is tired of living in a house with a ton or more of old paper.

Add Winston-Salem, NC to your collection of real life Mortuary horror tales. Back around the mid 1990's a Funeral Home was doing "lay away" for the dear departed. Turns out they were being stored In a garage with no A/C In plastic body bags. They were described as "soup" when the authorities Investigated.

Can you give my phone number to Mrs Pappy? I want to...ask for her meatloaf recipe...yes, that's It...meatloaf recipe sounds plausible.