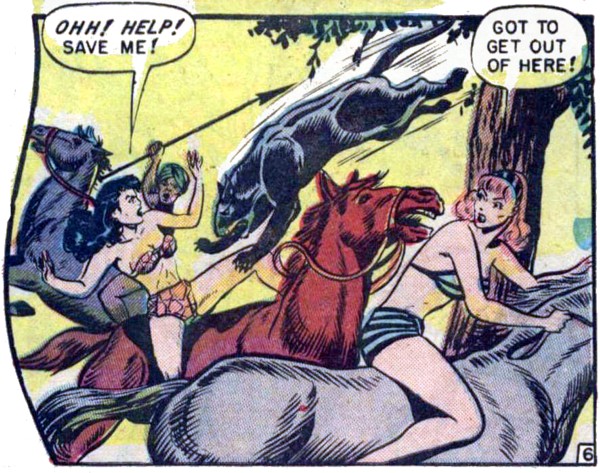 I feel as knocked on the head as Rulah, Jungle Goddess, in this panel from “The Ravishing Rustler.” I would have sworn on a stack of Fox Features comic books that I had shown a story or two featuring the character...but, in checking back in my files I have not. This is the first. 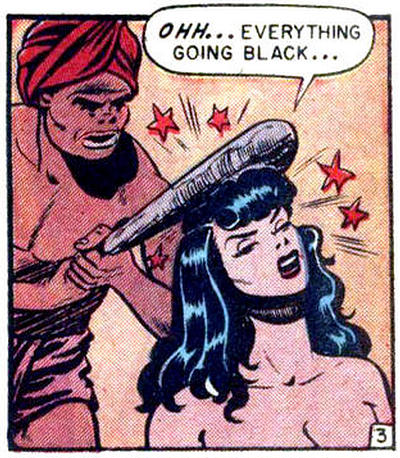 Anyway, in the fantasy jungle that appeared in comics featuring Tarzan, Sheena, Lorna, Jo-Jo Congo King, and now Rulah, there are a whole bunch of white people who cavort about in the forests, barefoot and near-naked, protecting the natives and generally being the law and order in lawless places. Who can blame me for getting confused on my jungle heroines?

Rulah sports a brief two-piece outfit, so does her adversary, the “ravishing rustler” of the story’s title — an “American villainess,” says Rulah — who is rustling native cattle and selling them on the European black market. Remember your history lessons, Pappy readers...after World War II there were shortages of everything, including meat. Of comic book jungle people there were apparently no shortages. 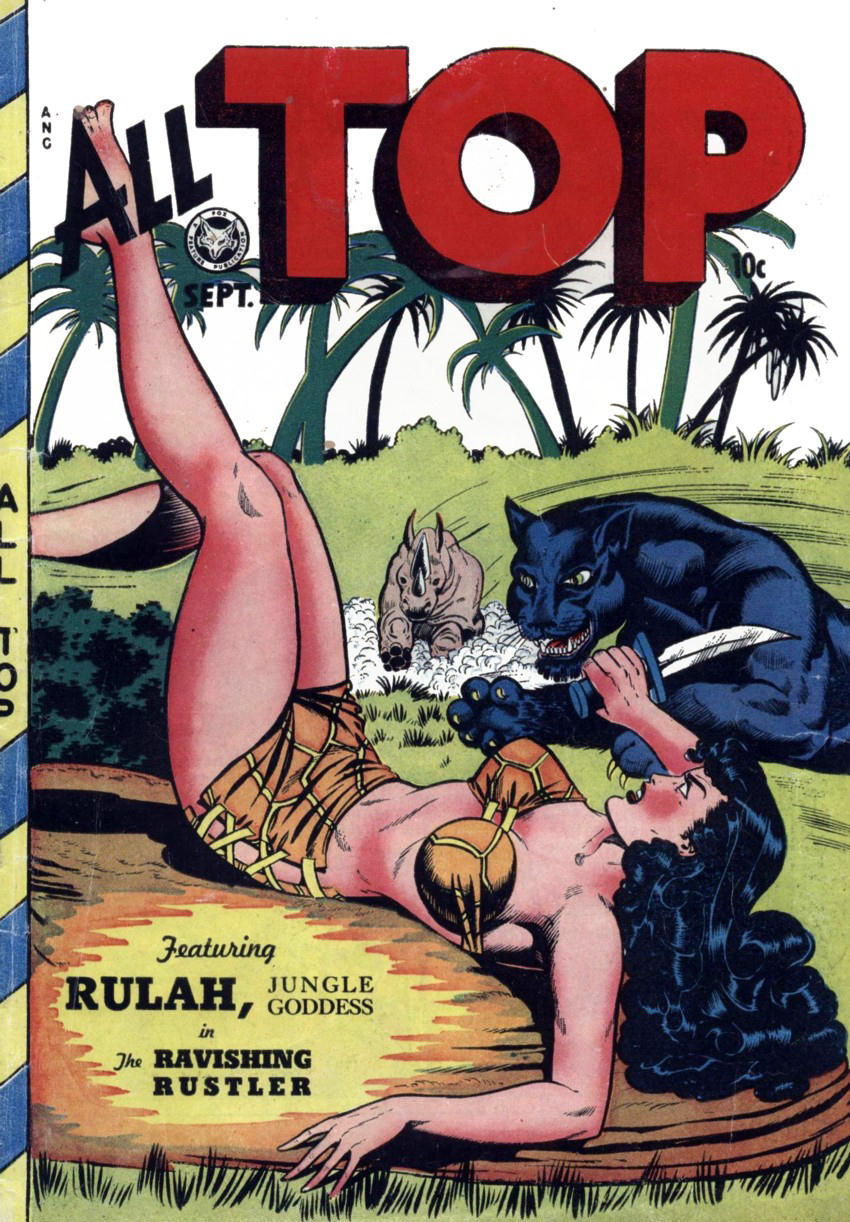 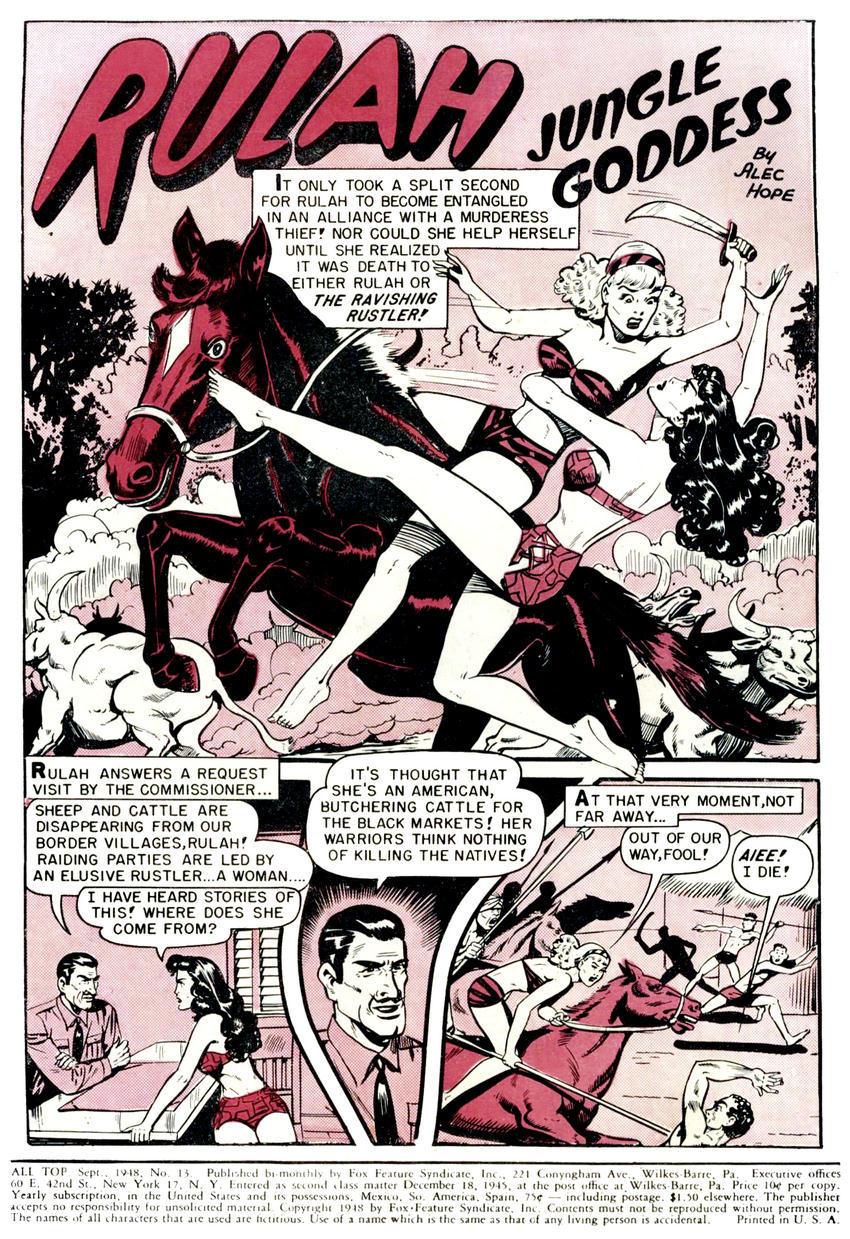 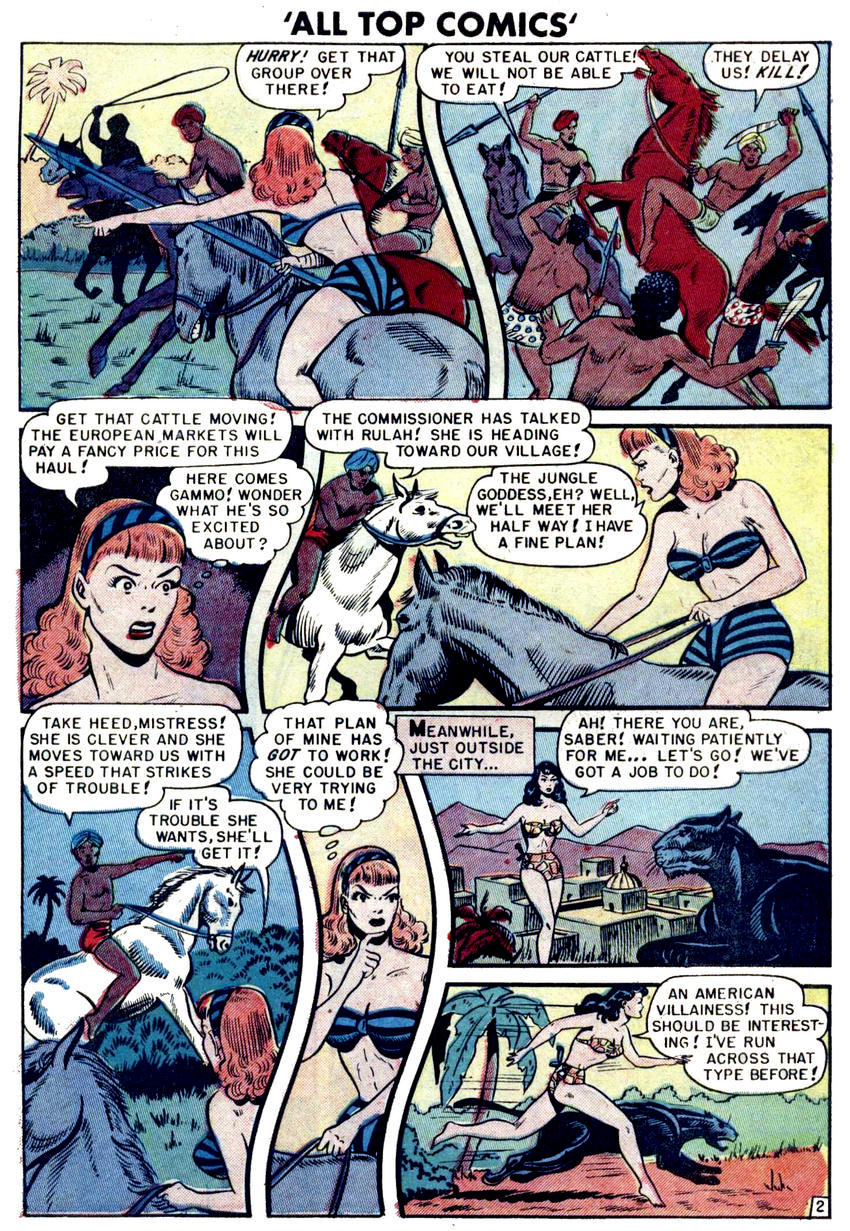 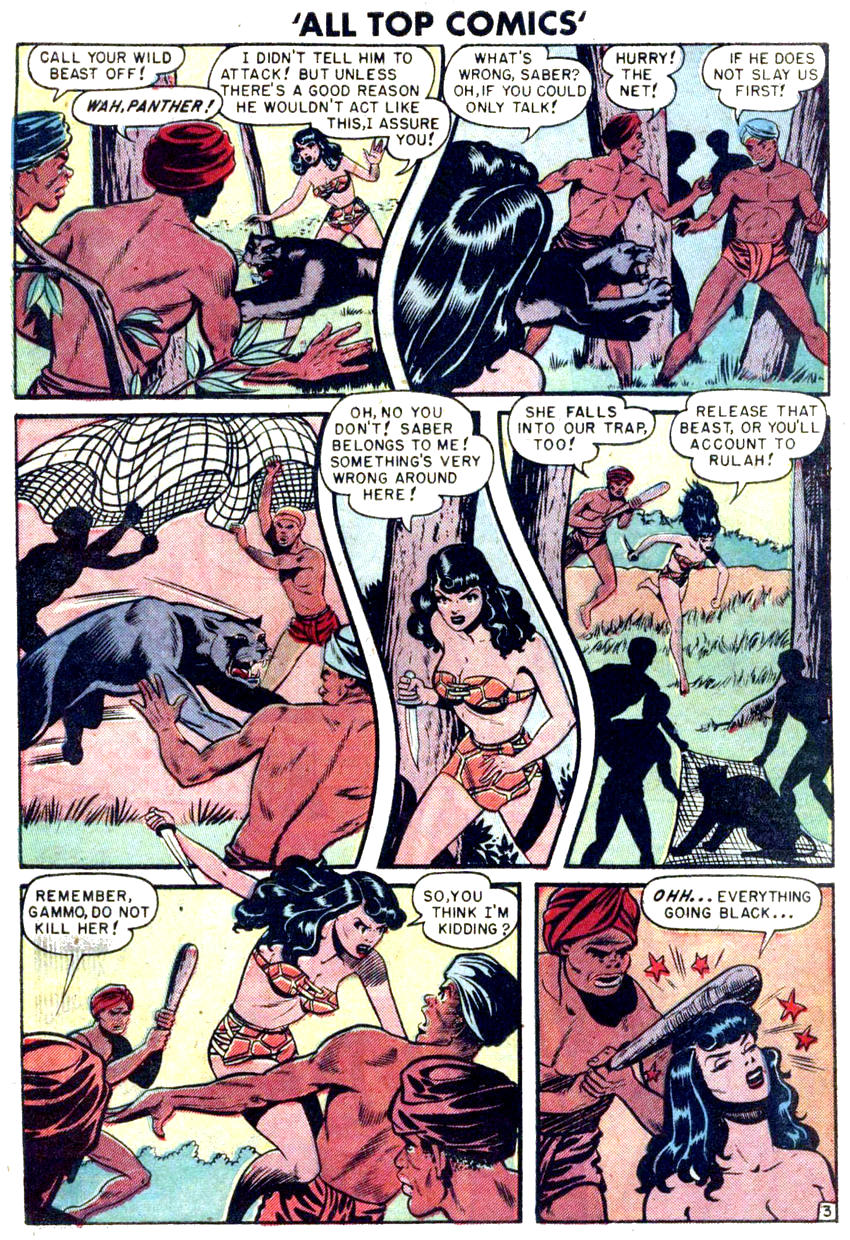 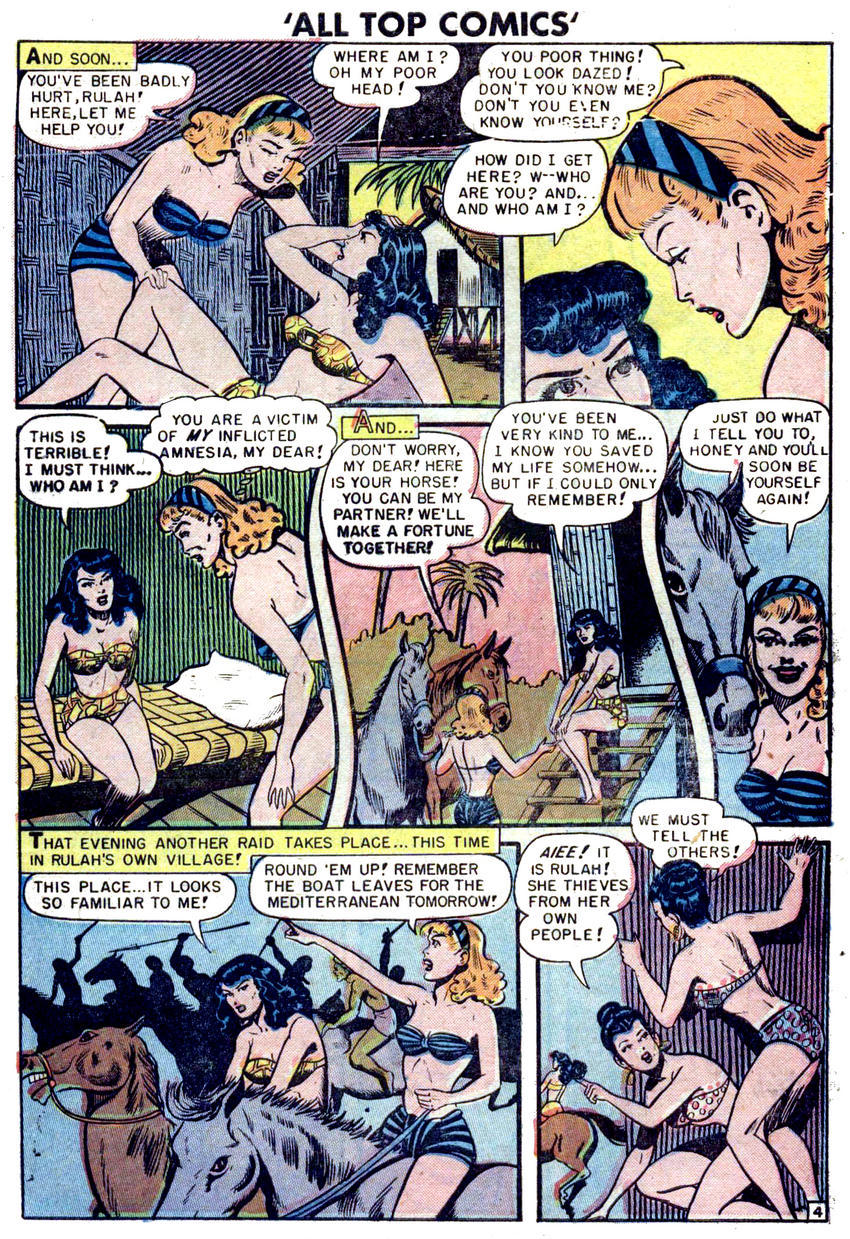 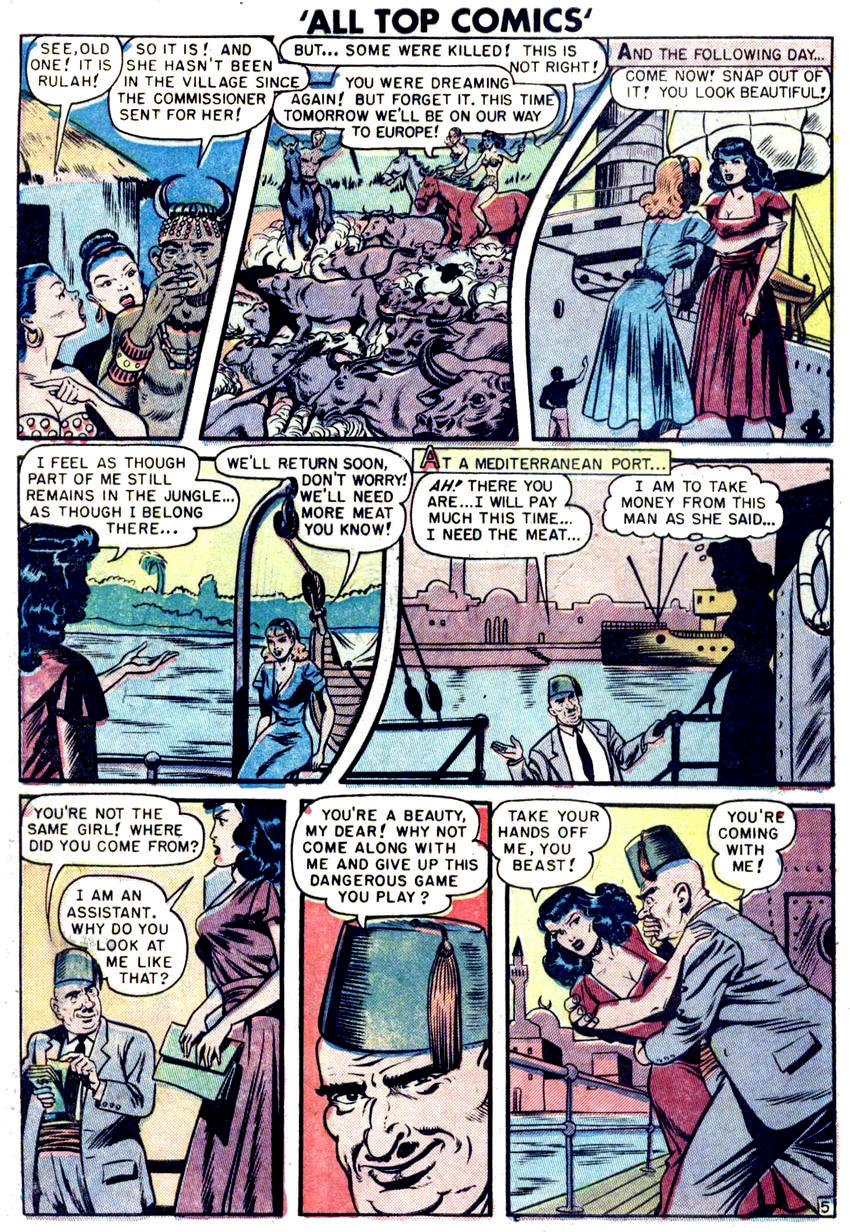 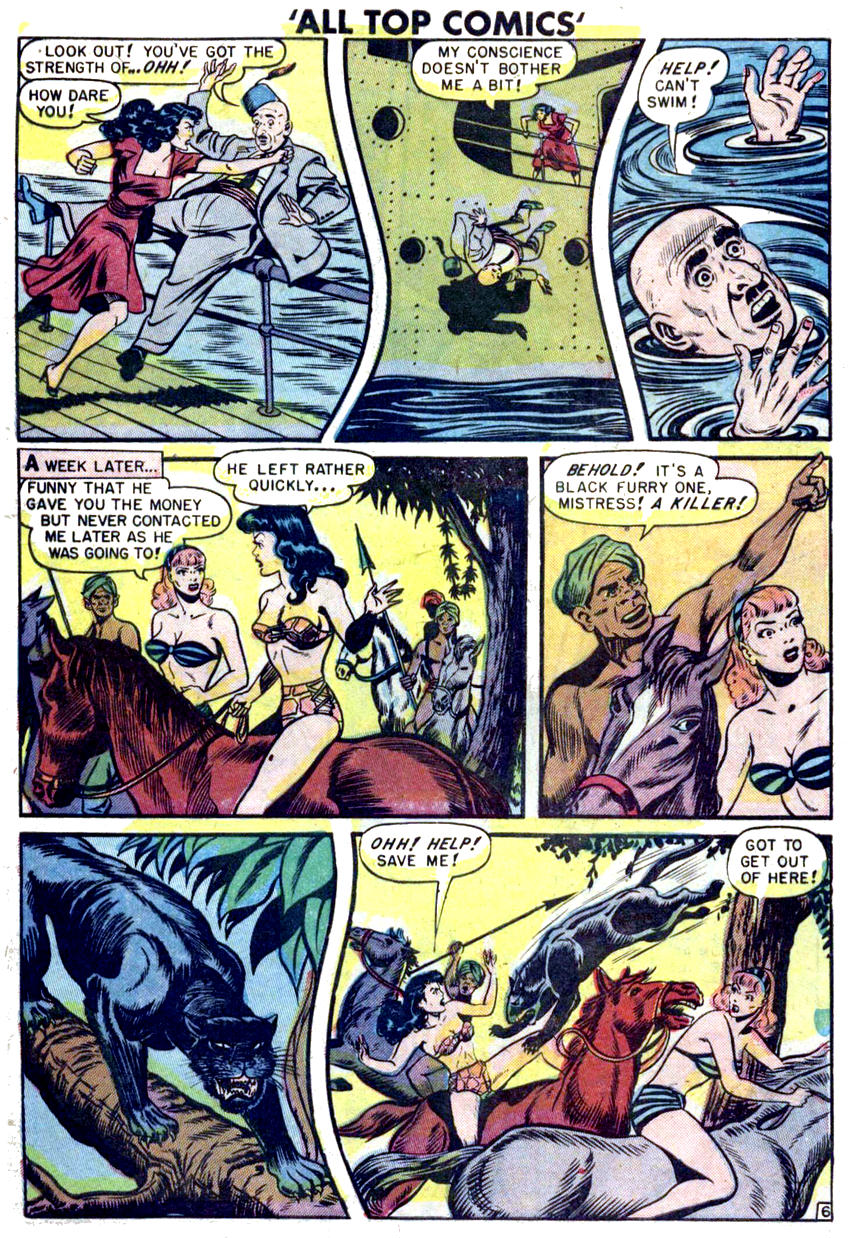 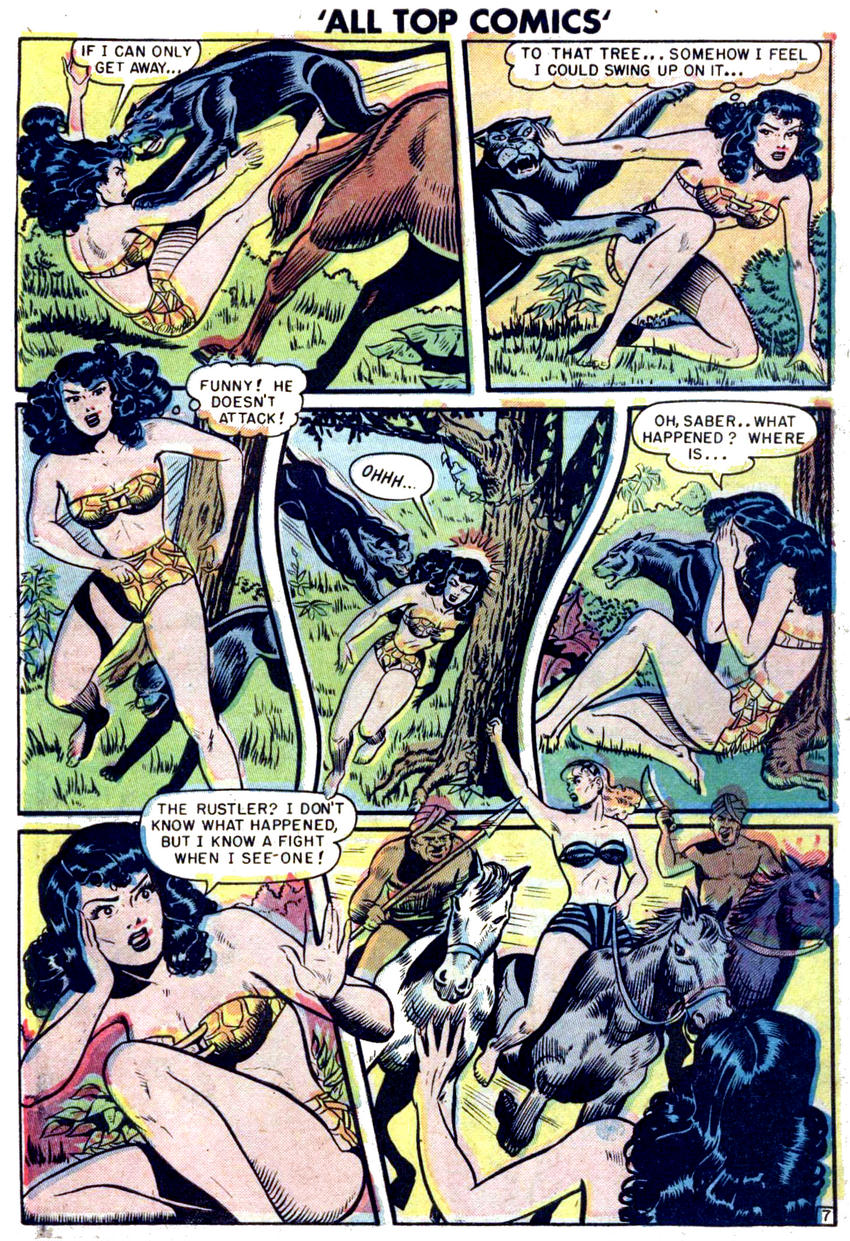 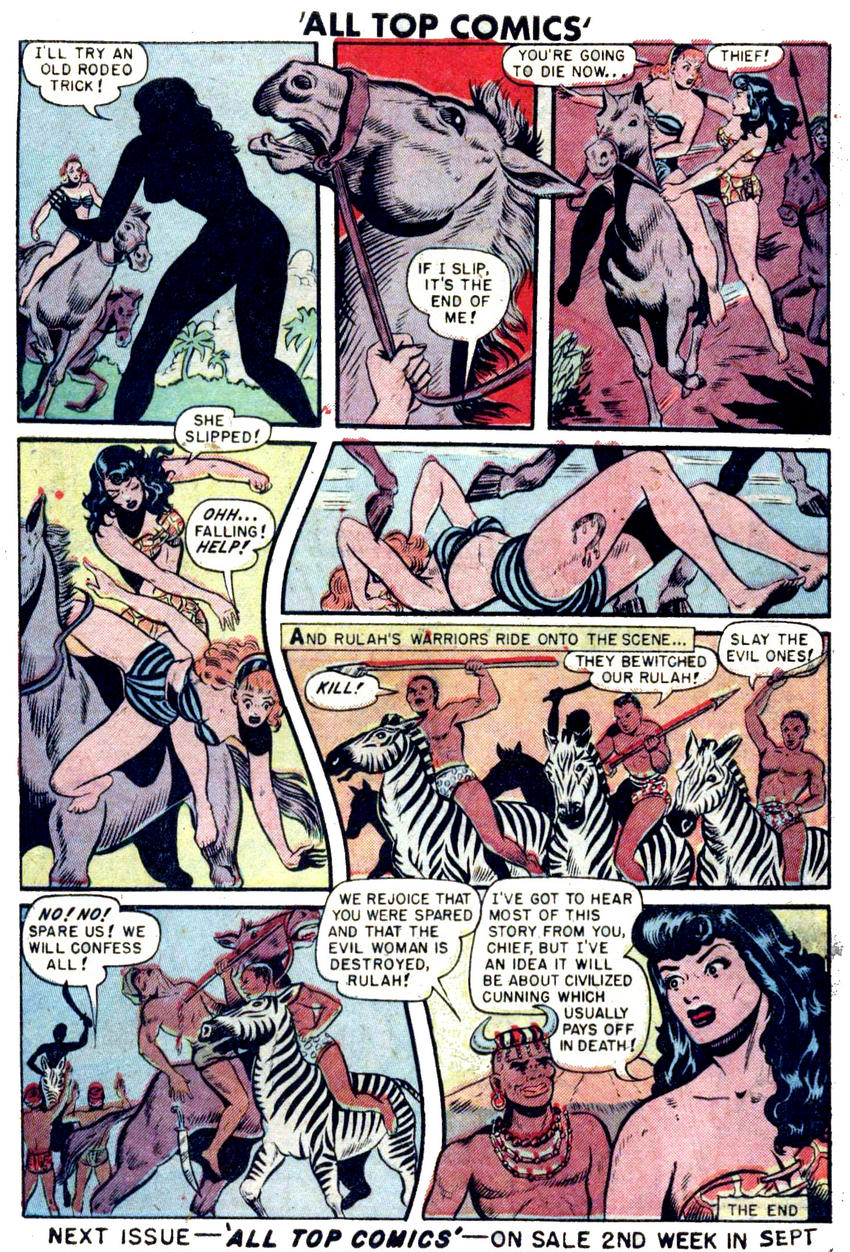 Nice! It's always nice to see two Tarzan girls frolic... I mean working together.
What about the Comics Code, mr. Pappy?
I mean, we had "Pantera Bionda" (= Blonde Panther), our own Sheena, who had to skip bikini and wear long gown (spotted) after the Federici-Migliori bill proposal that led to to the "Moral-Guarantee" Code.

One problem with Iger Shop (I notice it in Karswell's blog) is that I can't spot the artists. I always find a "familiar" look, but... I guess I just can't stand this "Henry Ford" approach to Comics...

J D, sometimes familiar styles pop out of the Iger artist aggregation. Jack Kamen is one who comes to mind, as is Matt Baker. In Fiction House's Jumbo Comics there was Robert Webb, who did Sheena. I am not certain how the work was allocated, or the names of all the artists who worked for the organization. To further complicate matters, the Fox Features comics also used stories by other freelance artists. With what the notoriously stingy and slow-paying Victor Fox paid, the artists who lined up for work weren't all of the caliber of Wallace Wood, who did some work for Fox.

(Wood's sometime inking partner, Harry Harrison, told the story of Wood, who once adopted a menacing demeanor to confront Fox, demanding payment. He dressed like a gangster, and for emphasis, ground out his cigarette on Fox's desktop. He got his cheque.)

MMMM, Rulah. I would've sworn you'd run her stories before, too, but there's so many of these scantily clad white-power representatives--I mean jungle princesses--that she was fairly easily overlooked.

When I saw the cover, I immediately thought of Matt Baker, but I'm sure you would've mentioned it if you knew or thought it was his work. I can't identify the "old" artists like you can, Pap; I'm good at spotting the moderns, whose stuff I've read more of.

I just love the succinctly descriptive dialogue: "I die!" "Everything going black!" "I'm falling!" Writers just didn't trust the artists back in the day, did they? That kind of crap ran all the way up to the 60s and beyond.

Civilized cunning usually pays off in death, Pappy! We read that at the end. What a comic book story to eyeball! Dialog like, "aiee! I die!" makes us pity the fool who receives the ravishing rustler's spear point. Boy-howdies, the comic book jungle was rockin' in this story. Just the right whack to the noggin and amnesia deluxe! Story writing like this always amazes me. The comic book writers must have stolen ideas from each other, but somewhere along the line was the writer loosened up after a few drinks who came up with some of the quasi-original brain storms. (The actual origins of our wonderful clichés must be lost in the mists of time.) Swell when there's amnesia, hypnosis, vile mind control drugs and dead-ringer evil look-alikes, just to name a few. Sure the super hero, space and crime-fighting comics had those things, too, but the jungle comics tended to do it up better —if for no other reason than the jungle gals had those animal skin bikinis. =smile=

A really fun post. Not that other posts aren't fun, too… Thanks, once again, Effendi!

Ryan, not only did the writers not trust artists to tell the story, they didn't trust the readers to understand. One of the criticisms aimed at comic books during that time were that they were sub-literate. Comics like this, featuring sexy, fighting women, were aimed at young men, and who knows how much reading of the words in comic books was actually done? Besides the critics of comics, did anyone in that day actually break down the story as to its literary or artistic quality? I don't know, but I doubt it.

Also, it would not be unlike me to be going through my back catalog and see a Rulah story I missed. Stuff like that has happened.

7f7, the plots using amnesia and the soap opera clichés other had to originate somewhere. The comic book writers of the era were writing comics at the same time pulp magazines were widely read, and the pulps grew out of the dime novels. The heroes were facing villains that conked them on their noggins and caused some temporary impairment. Then there were the Westerns, and cowboy movies, regurgitating the same stories over and over. Tried and true, all of them! The language of popular culture.

And I agree with you that in the jungle comics they had those skimpy two-piece outfits to distract the reader from dopey plots.

Didnt Will Eisner cre8 jungle girls? Did any1 ever intervu him about that? Or only Tha Spirit? Like I wonder if he put any deep theery in2 it or if it was just, "Lets set it in tha jungle so we can draw girls in ripped up bathing suits."