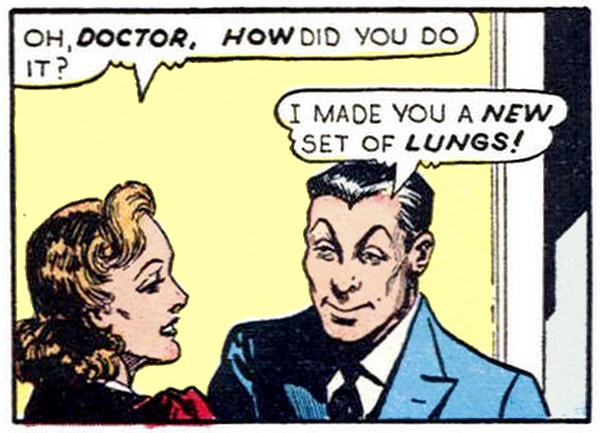 Dr. Synthe (short for “synthesis”) has the ability to make things from the stuff that is floating around in space, including mechanical objects — a car — or money, or even new lungs for Betty, a woman he just met after arriving from space.

The short-lived character (appearances in four issues of Centaur’s Stars and Stripes Comics) was born of the superhero boom of the prewar comic book explosion. He is credited to grandly-named Harry Francis Campbell, writer, and a fellow grandly-named artist, Henry Weston Taylor.

Despite his godlike powers, Dr. Synthe is unable to fix his rocket ship, and he crash lands on Earth. I said he had godlike powers, not that he is smart with them. He thinks it would be fun to be stranded on a world with people. Even godlike entities from space must have weaknesses, including wanting to be around people. This introduction of Dr. Synthe is from Stars and Stripes Comics #3 (1941). 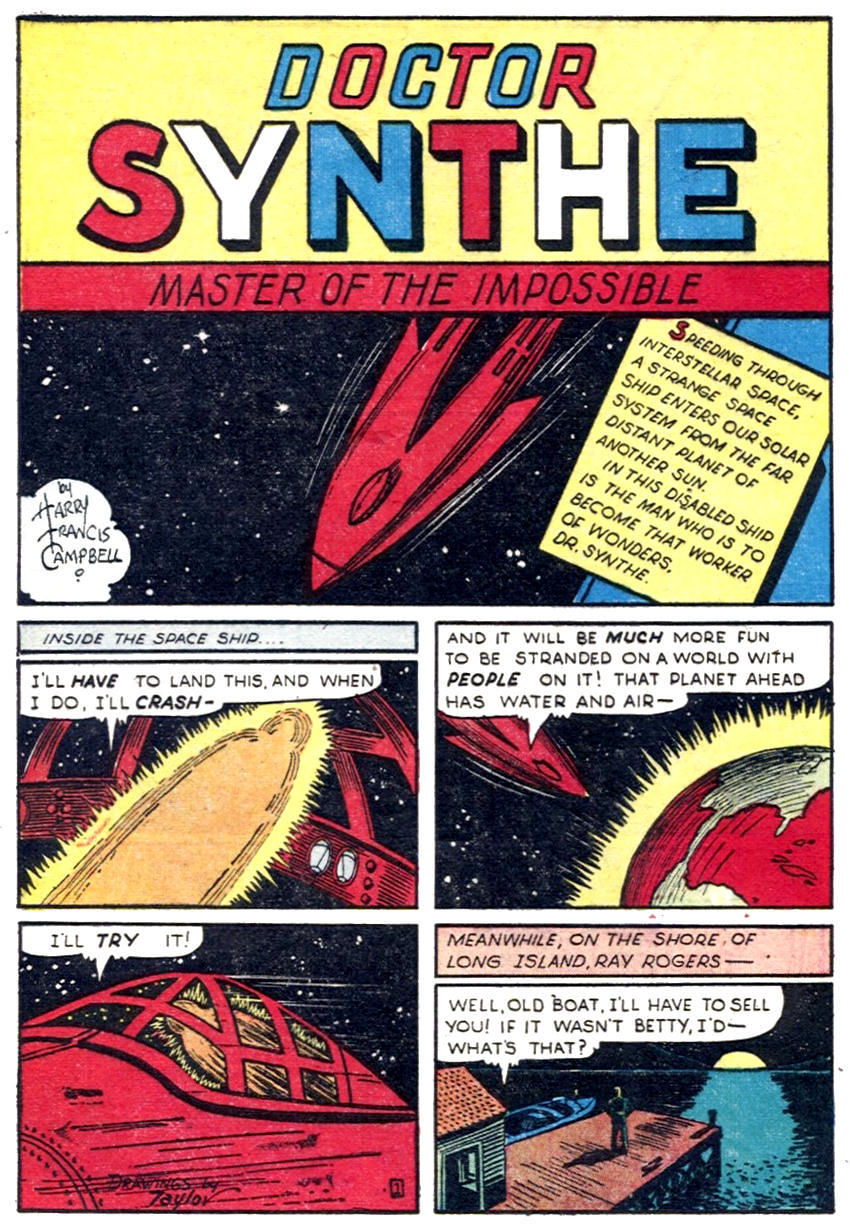 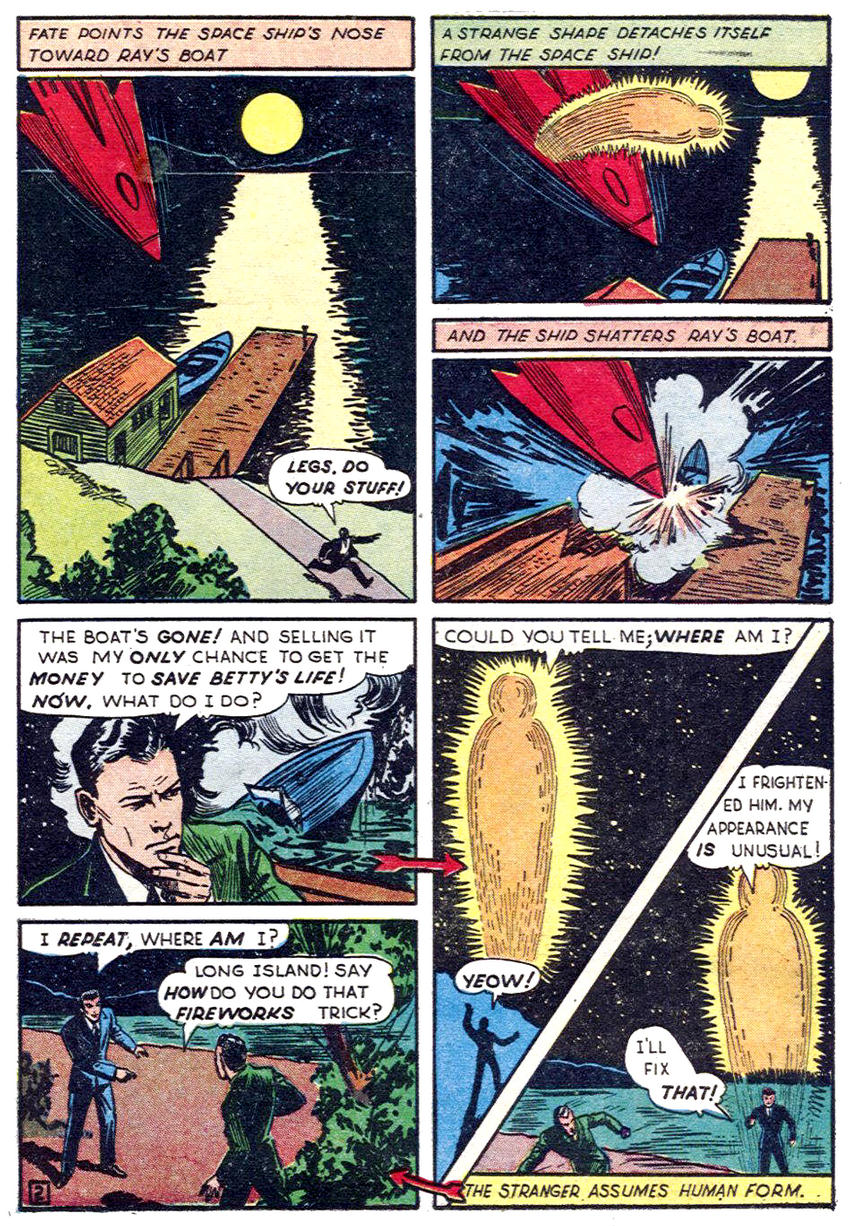 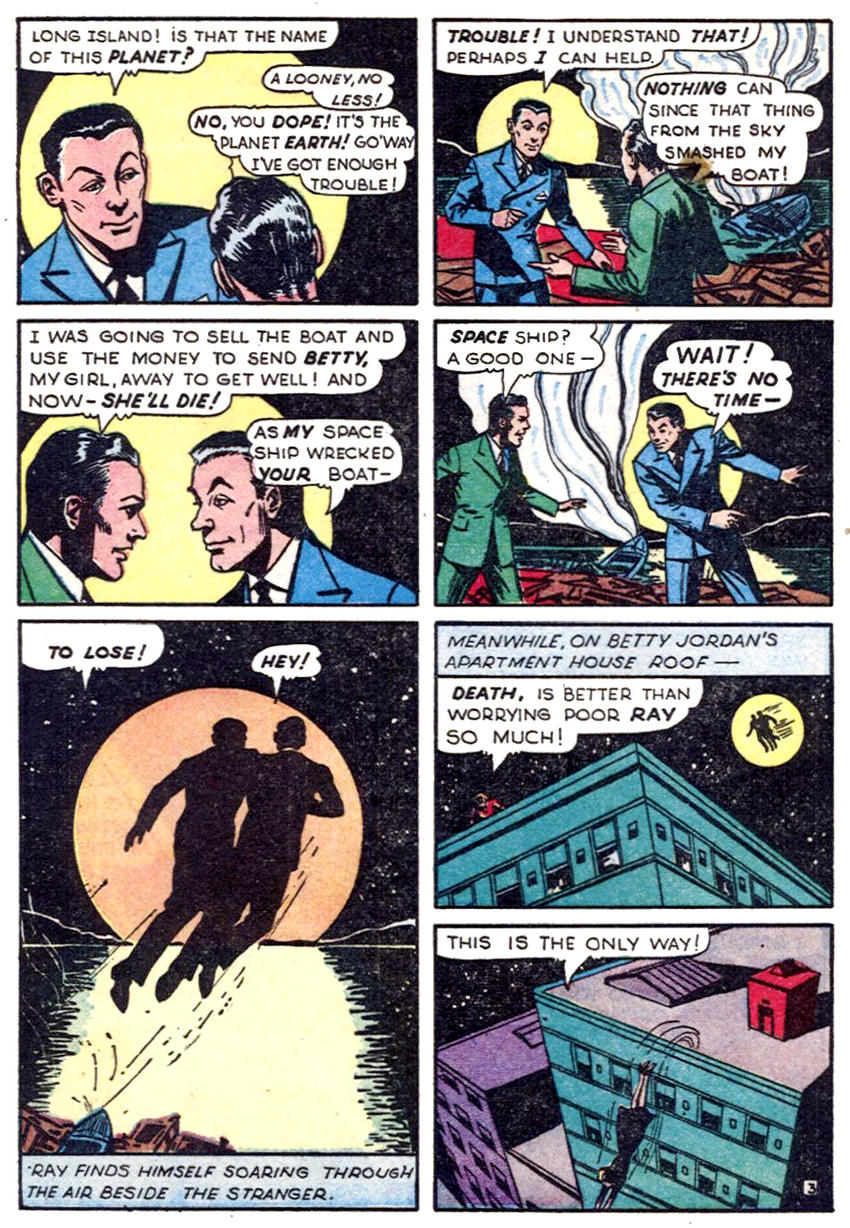 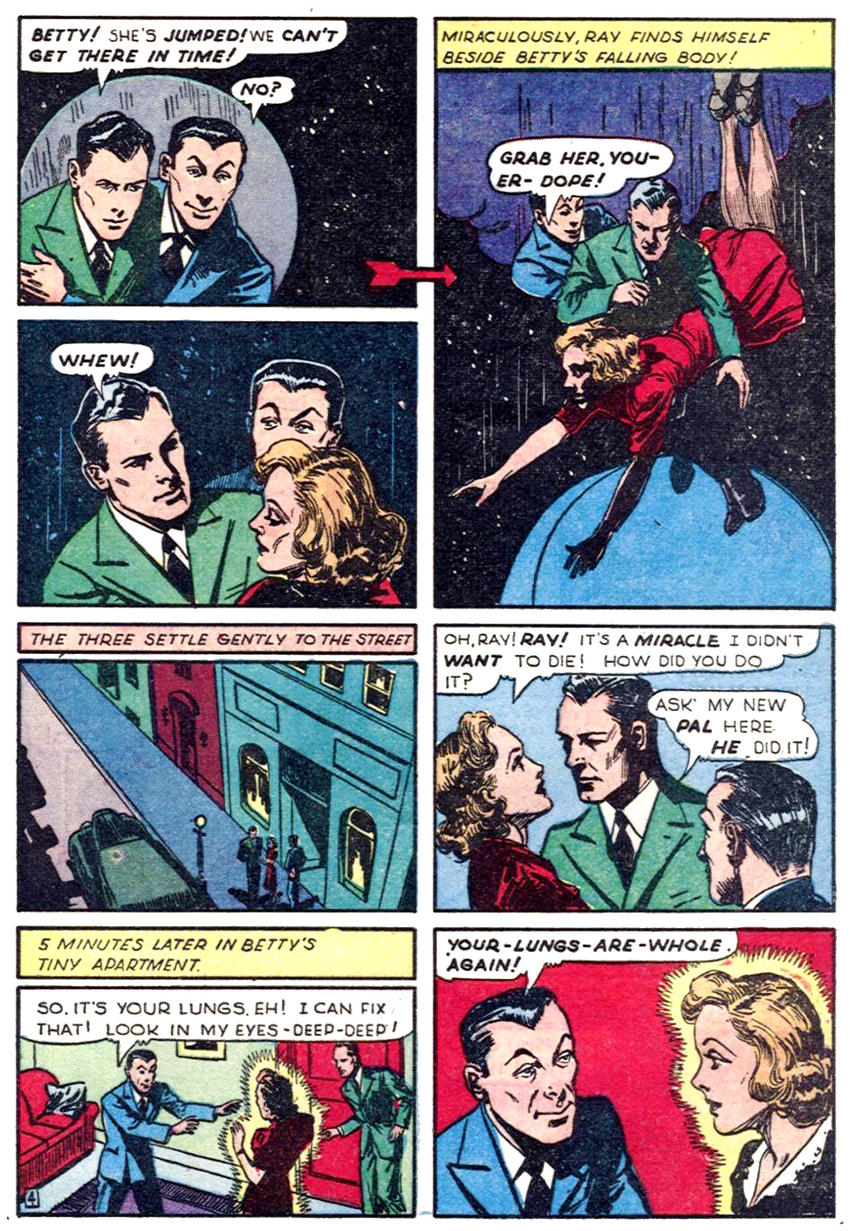 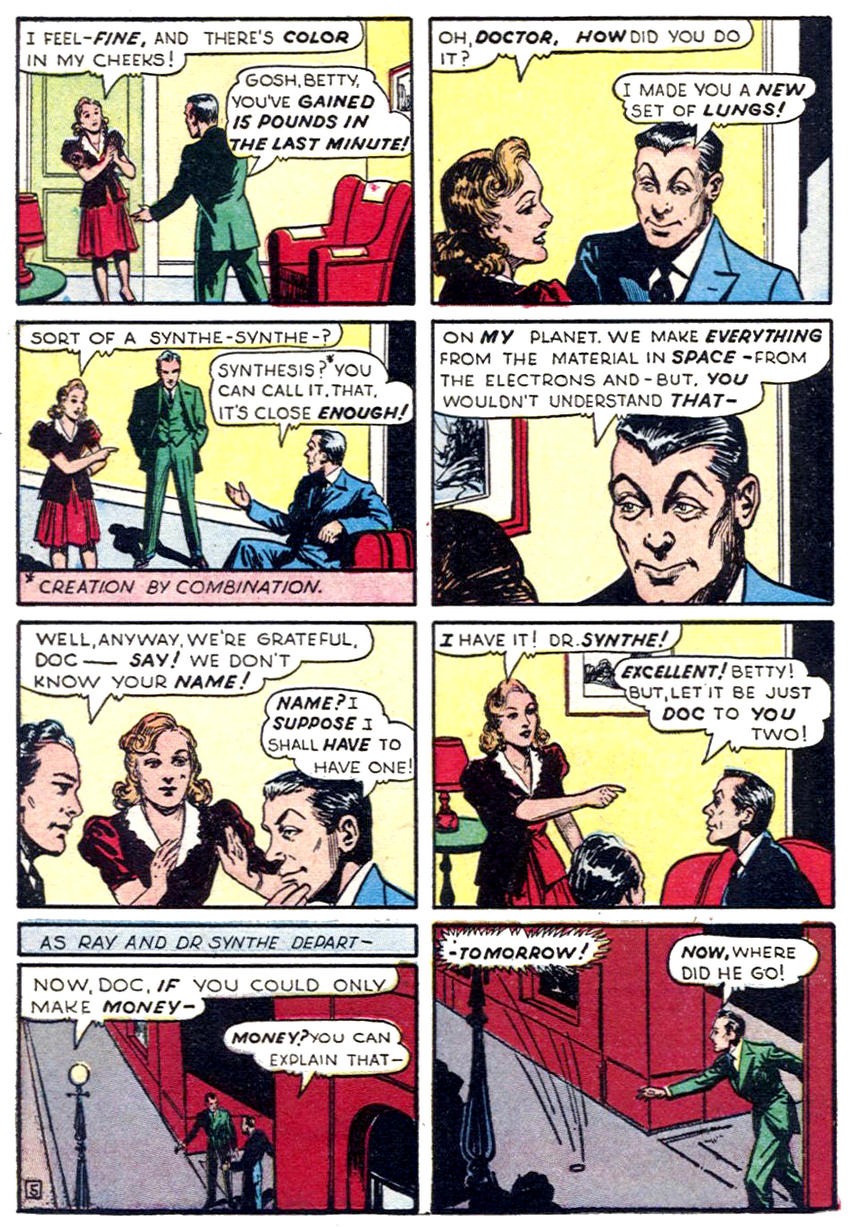 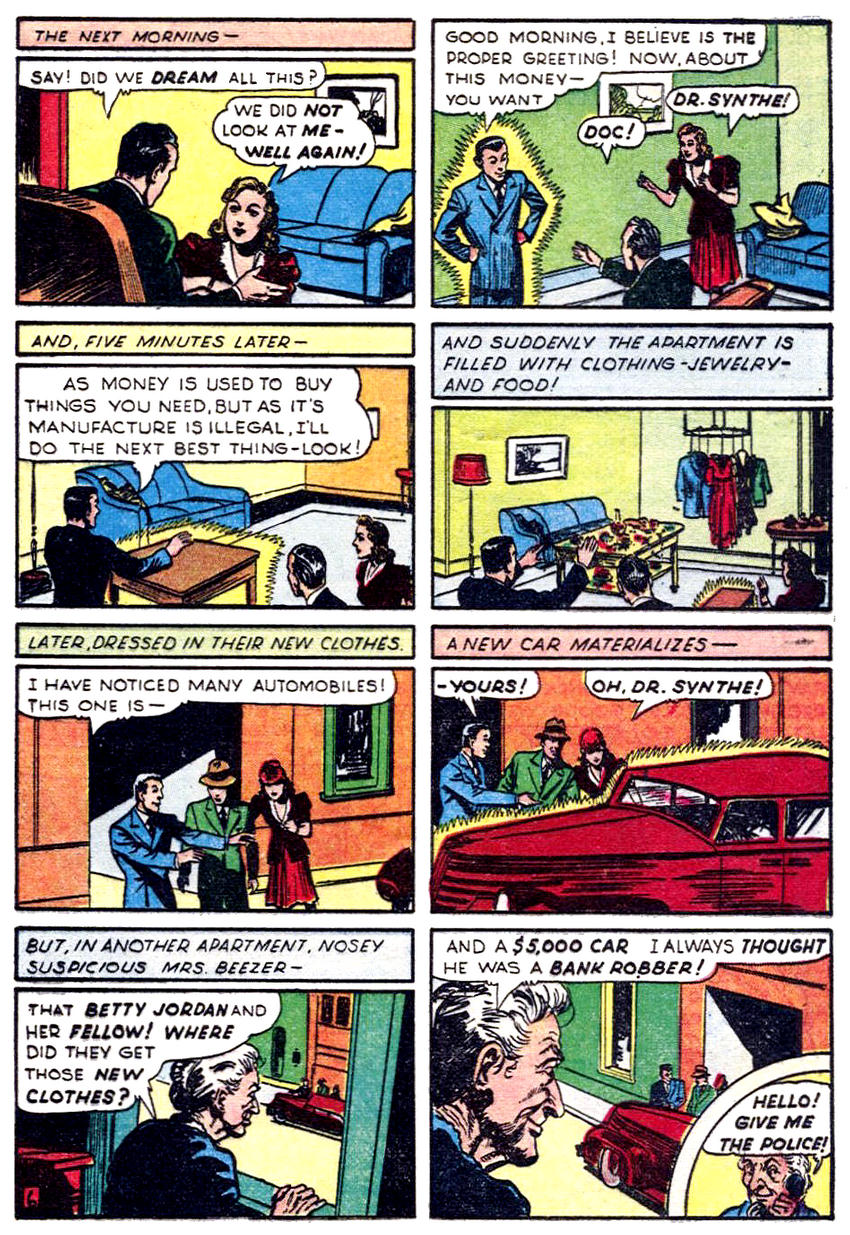 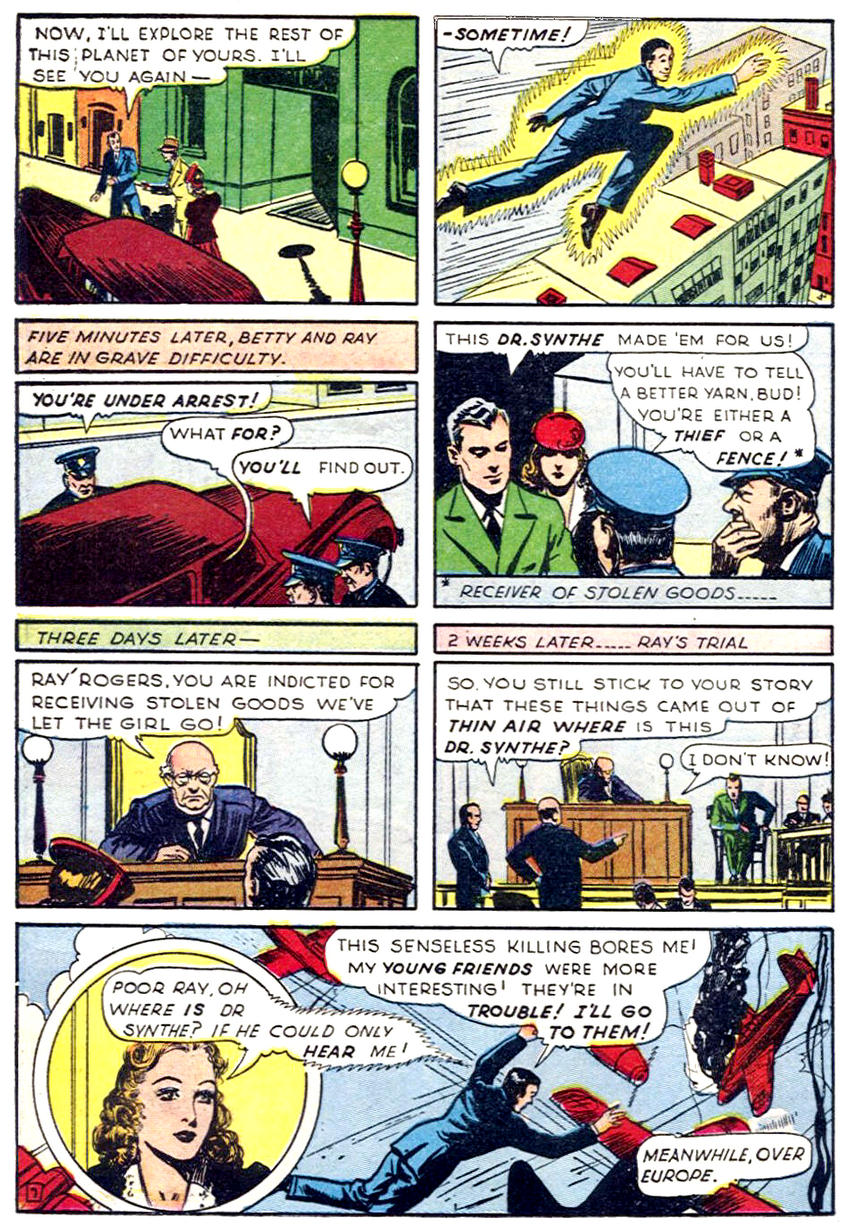 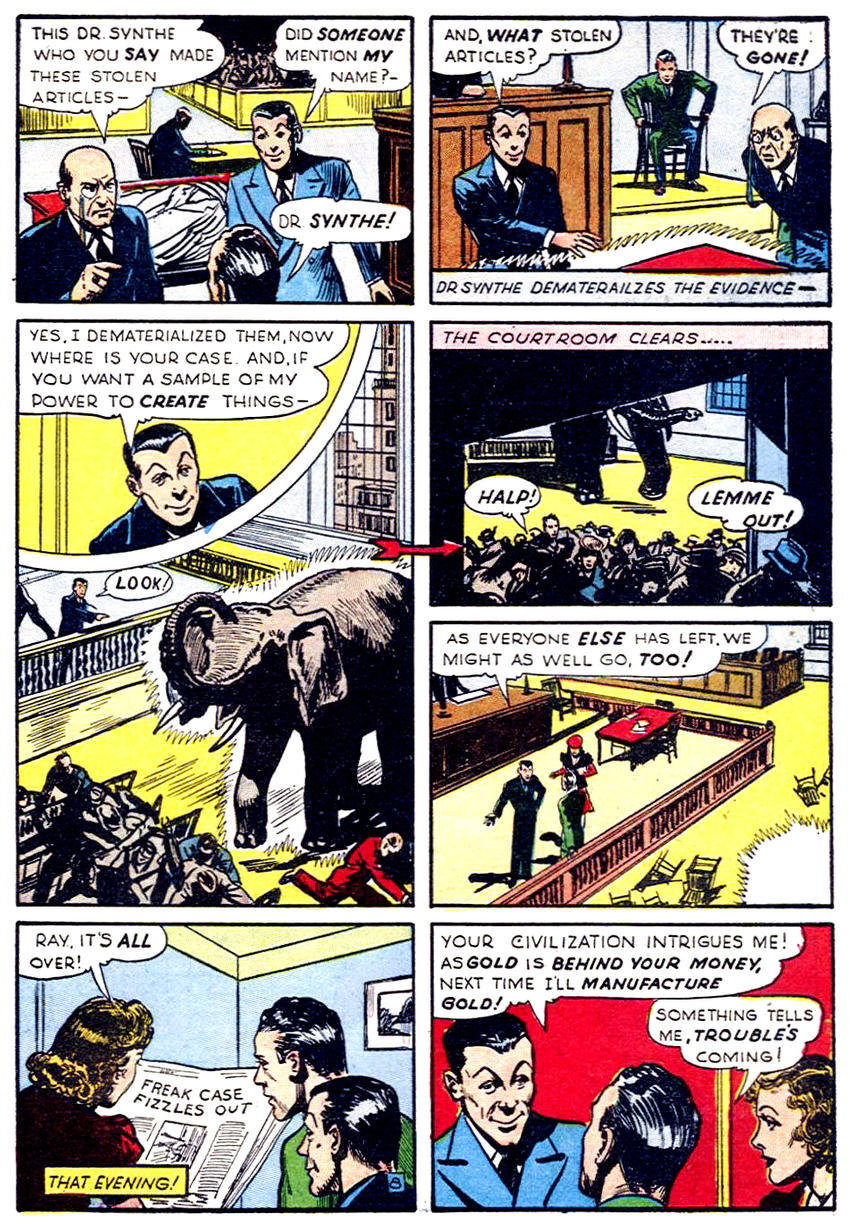 I can see why the strip didn't last: people have always instinctively preferred fallible heroes. Omnipotent protagonists are boring because there's no suspense. However, this one was mildly amusing in a classic screwball comedy kind of way. But, am I the only one who thinks Dr. Synthe looks like the Sub-Mariner?

Never heard of this character, but his face remeber me Namor, from Marvel Comics.

You know what's the problem with God-like entities from outer space? The humans they meet. They're so narrow minded... This guy just makes a new pair of lungs for a poor girl, out of nothing, and there's only one thing his human buddy can think about: "Can you make MONEY?" J_s C_t, what's the use of "making money"? Just ask the fella: "Please, make this fraggin' world a place where nobody has to starve or screech in pain. Make money USELESS!" And even worse, the alien himself finds it "interesting" and wants to "try to make gold". That's why the old "Three wishes" plot device never works! This comic is great literature. The doctor is a sort of Ante-litteram Beyonder, facing the same crap.
I like the art, the "doctor" has, though being of human appearence, an alien look. Reminds me of another Doctor.

Actually, the reason to call the whole thing off is not the question of pronunciation, nor the question of why Doctor Synthe had a reservoir-tip, but the problem at which you point: He's too powerful; every difficulty would be resolved ab initio if not for, well, stupidity.

Dr. Synthe sure looks a LOT like the Submariner!! lol

OMG Dr Synthe is BADASS yo OMG he can B my new best frend if he wants OMG!!! & He can play synth in my band 2 #BADASS

"This senseless killing bores me! My friends were more interesting, with their diseased body parts for me to tinker with! I'll go to them!"

Dr. Synthe can't be troubled with your horrible injuries! He's creating elephants in the middle of a courtroom! Here! he gave you a new bladder! New bladders for everyone! Enjoy!

Everyone, thanks for the comments. I took a couple of days off, and when I returned I had more than I anticipated. I'm not ignoring you; I just need to get back to goofing off.

An alien Demi-god who looks like a condom in his true form and turns into Gary Numan to play synth in Alicia's band. Boys and girls, you are incredible! :-)