Number 1737: “Where there’s cheese you will usually find rats!” 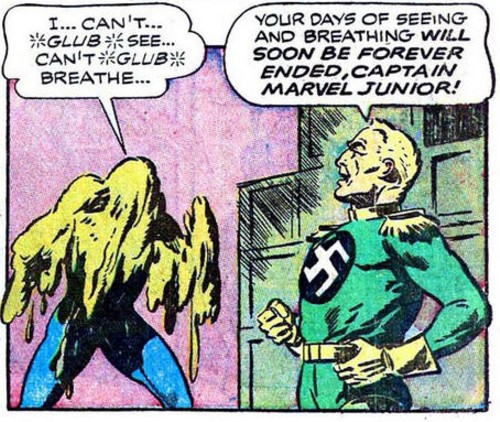 I hope I’m not spoiling this Captain Marvel Jr story for you by telling you the mysterious detective-with-no-name Freddy Freeman is rescued by is none other than Sherlock Holmes. But then, you already deduced that, didn’t you? Tell me, was it the deerstalker cap that tipped you off?

For some reason Freddy is selling papers in London. This is the last of four stories from Captain Marvel Jr #2 (1942). I looked at the other three and there is no mention of Freddy in London, so I assume he must’ve taken it upon himself to help the British rid themselves of black marketeers. (The final panel was obviously wishful thinking.)

Art attributed by the Grand Comics Database to Al Carreno. 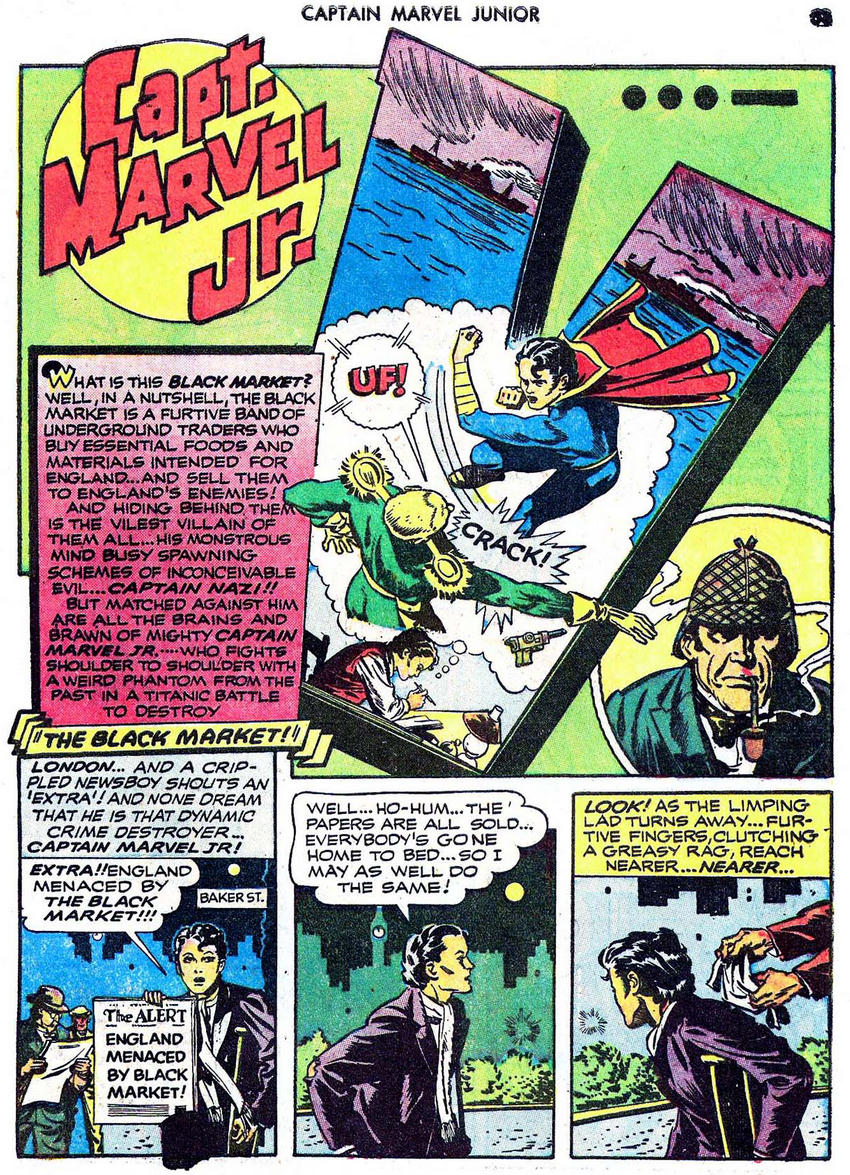 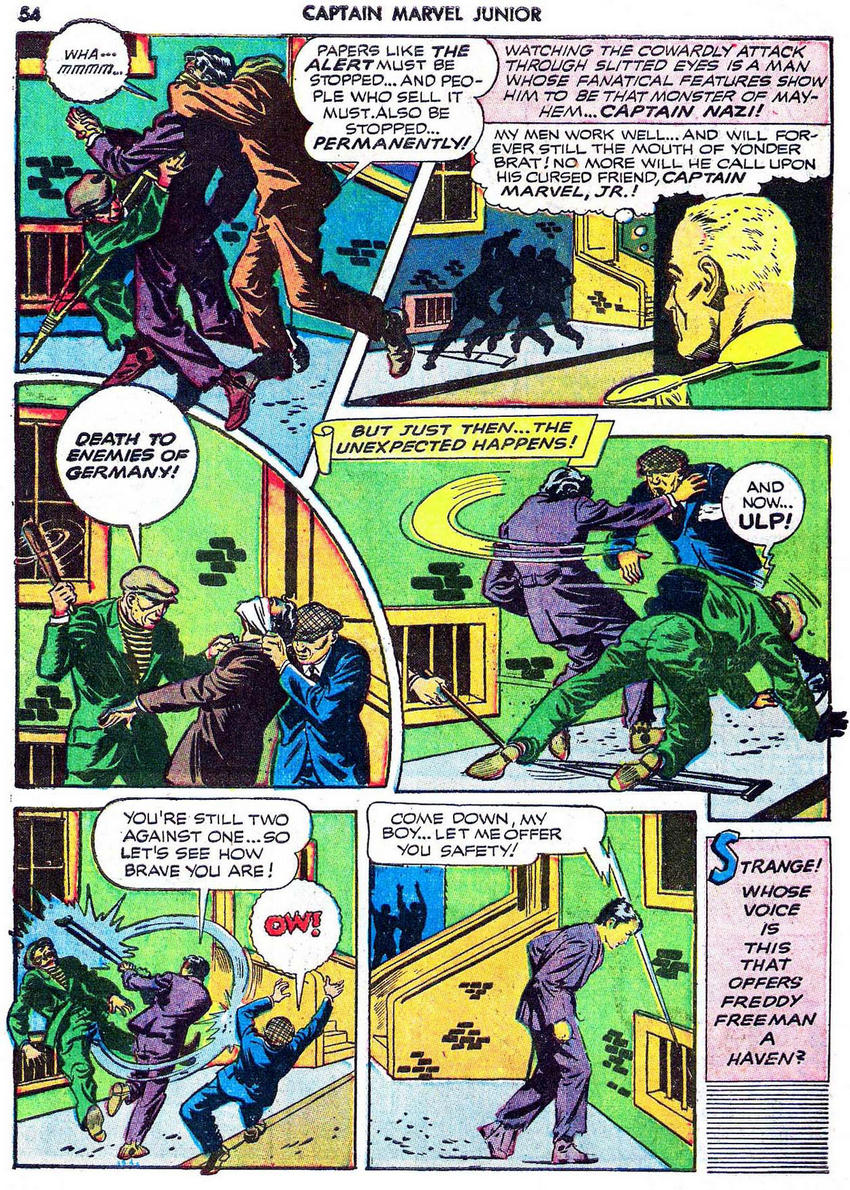 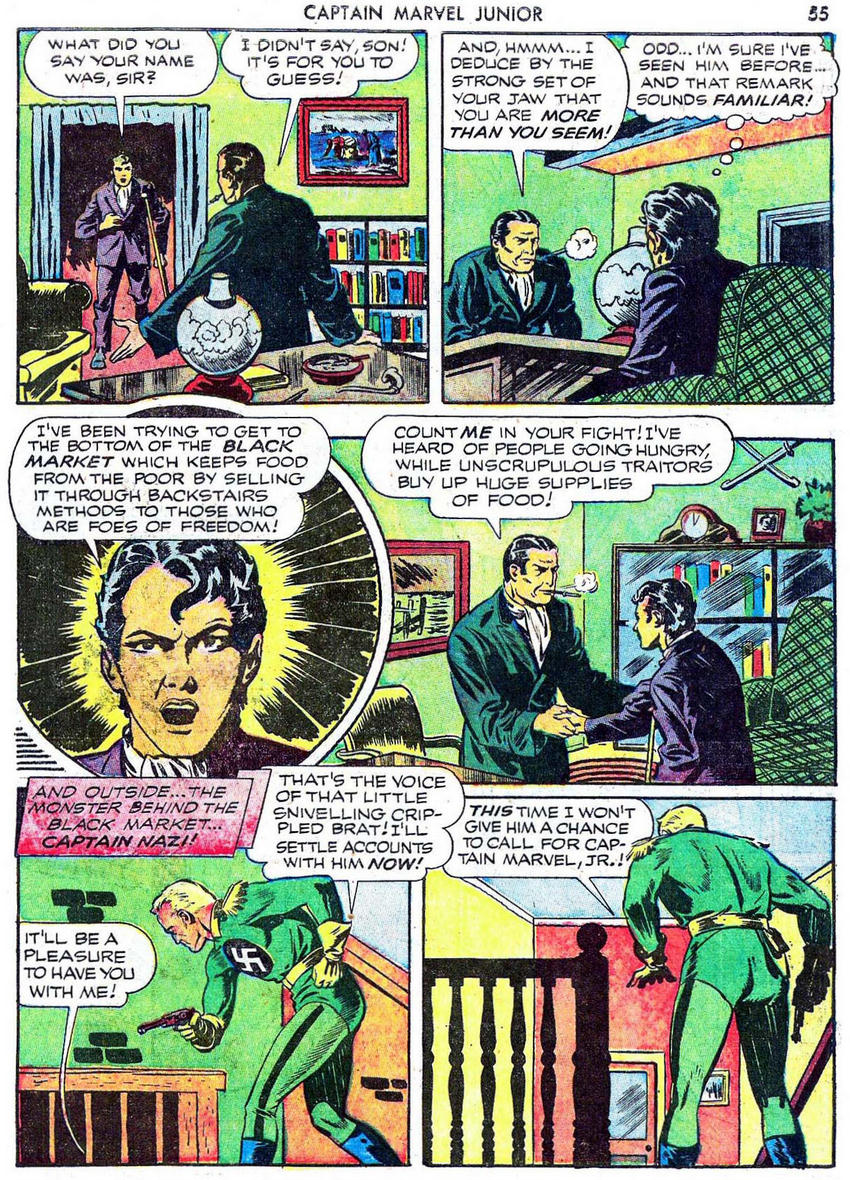 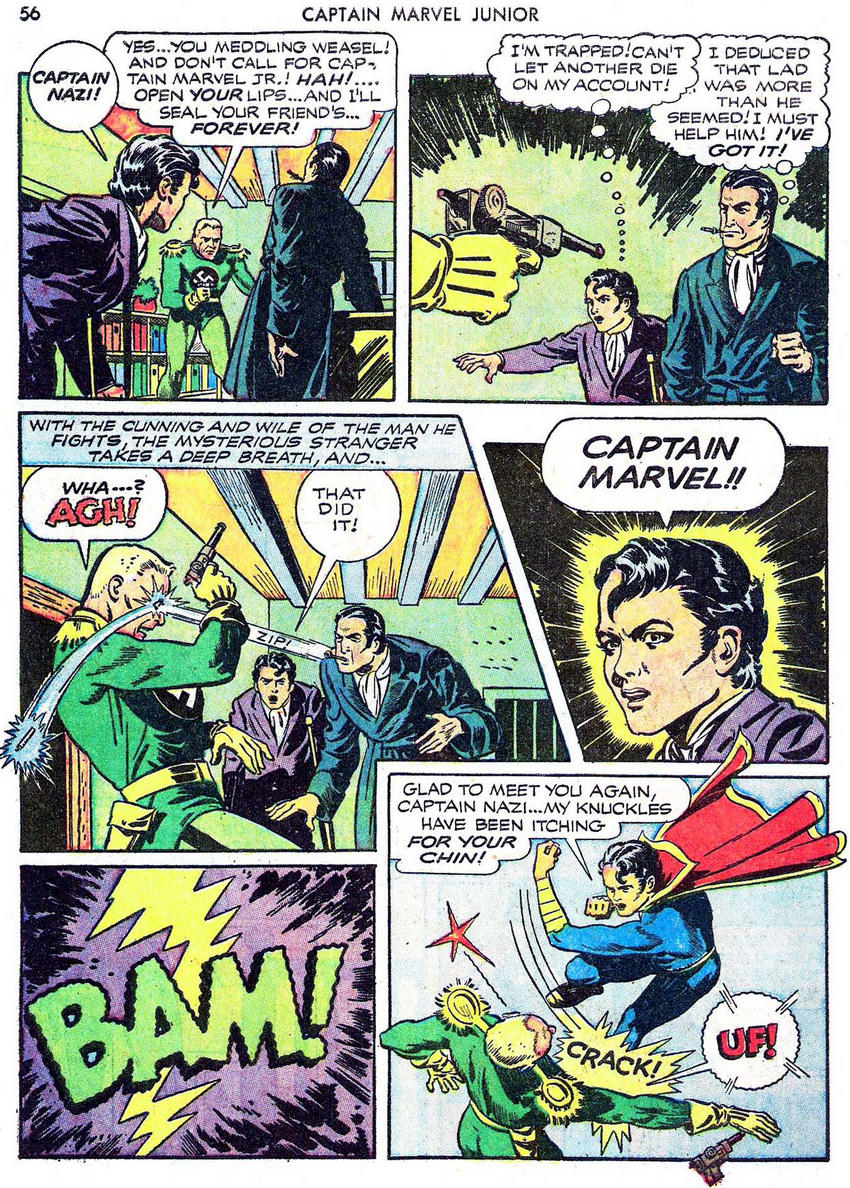 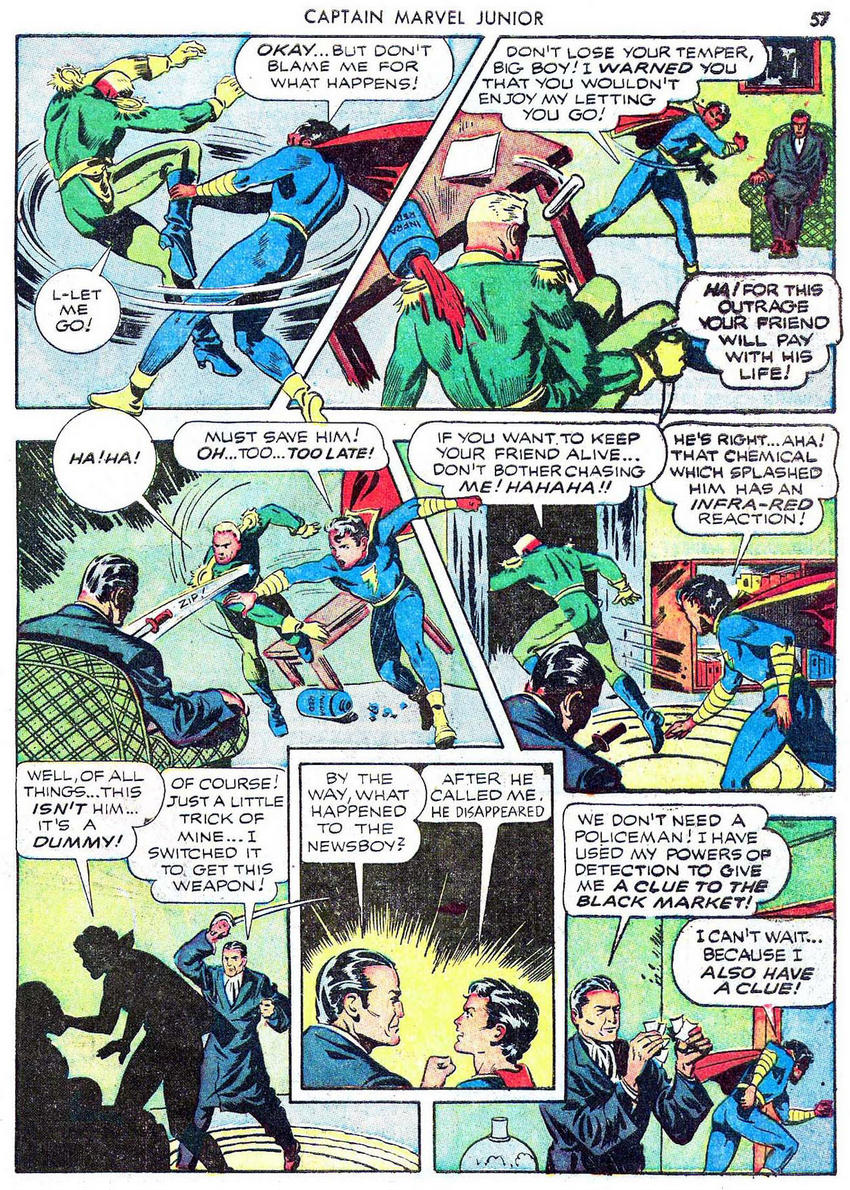 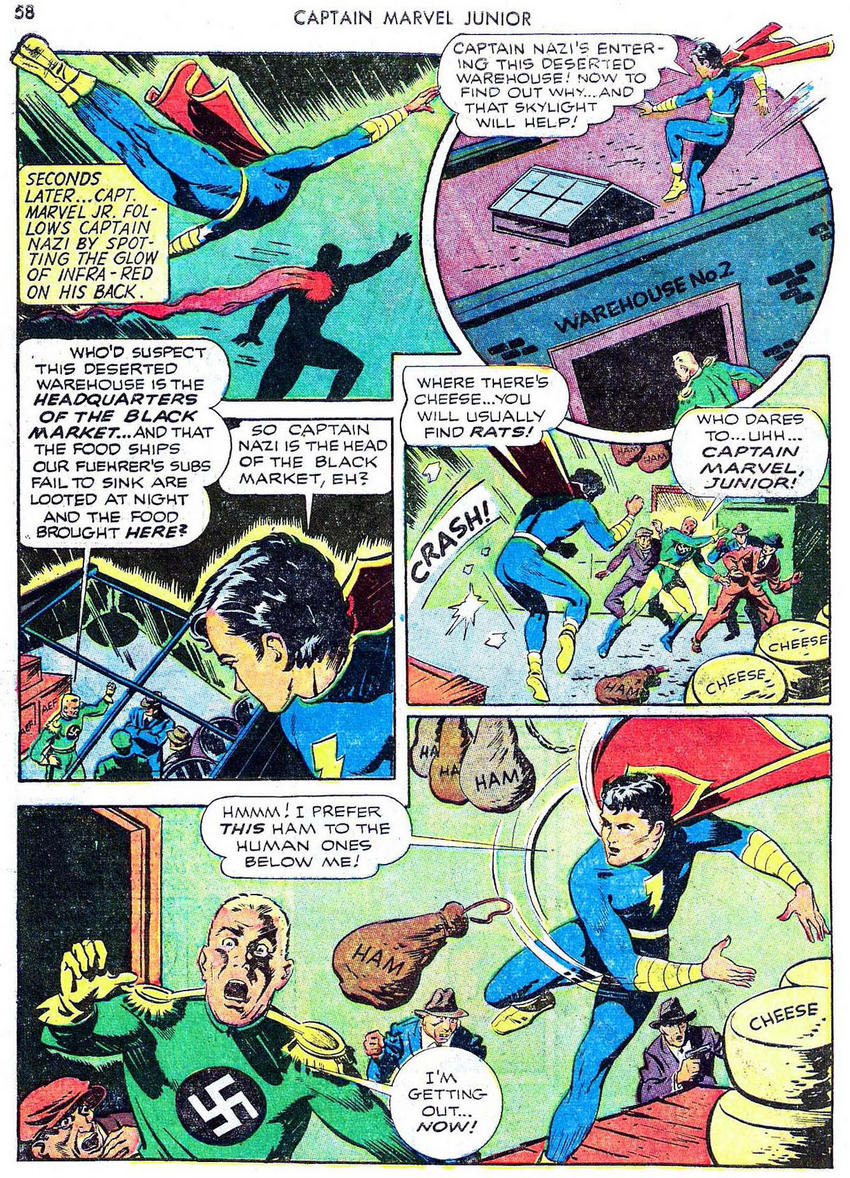 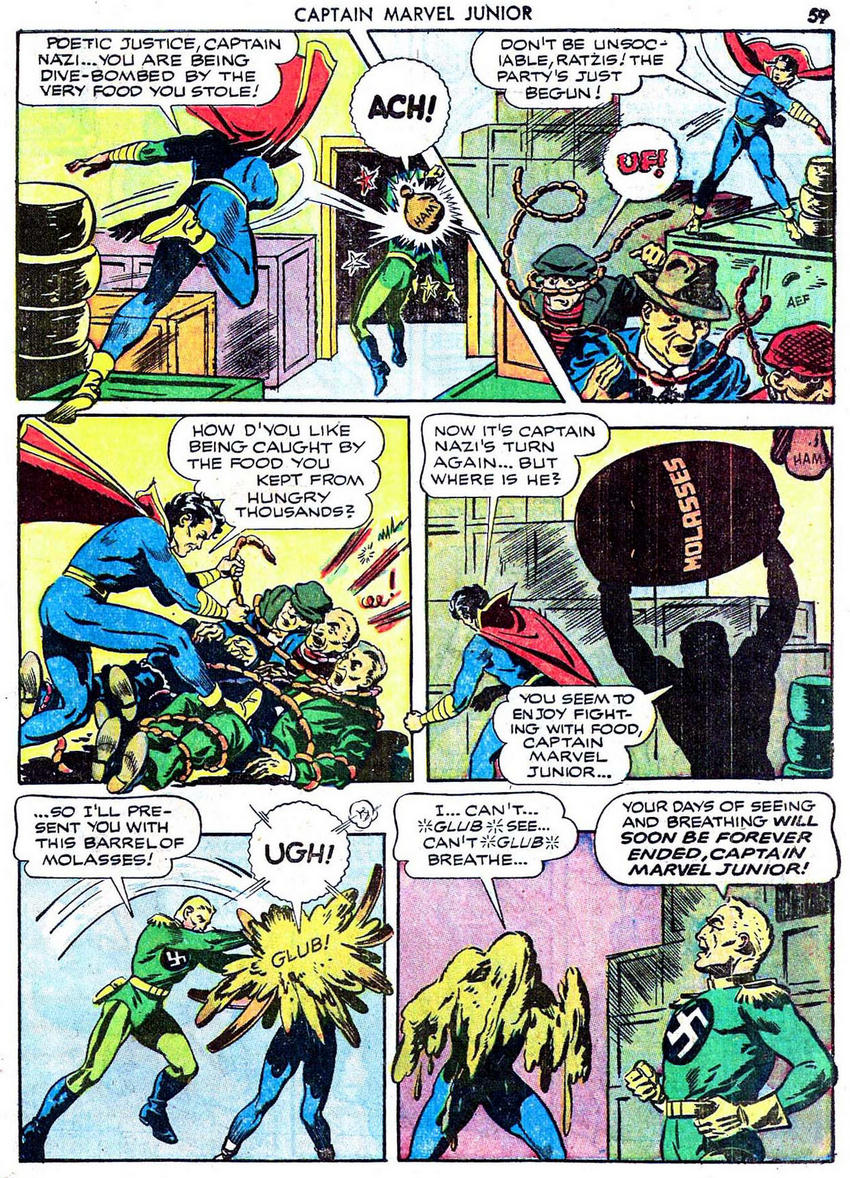 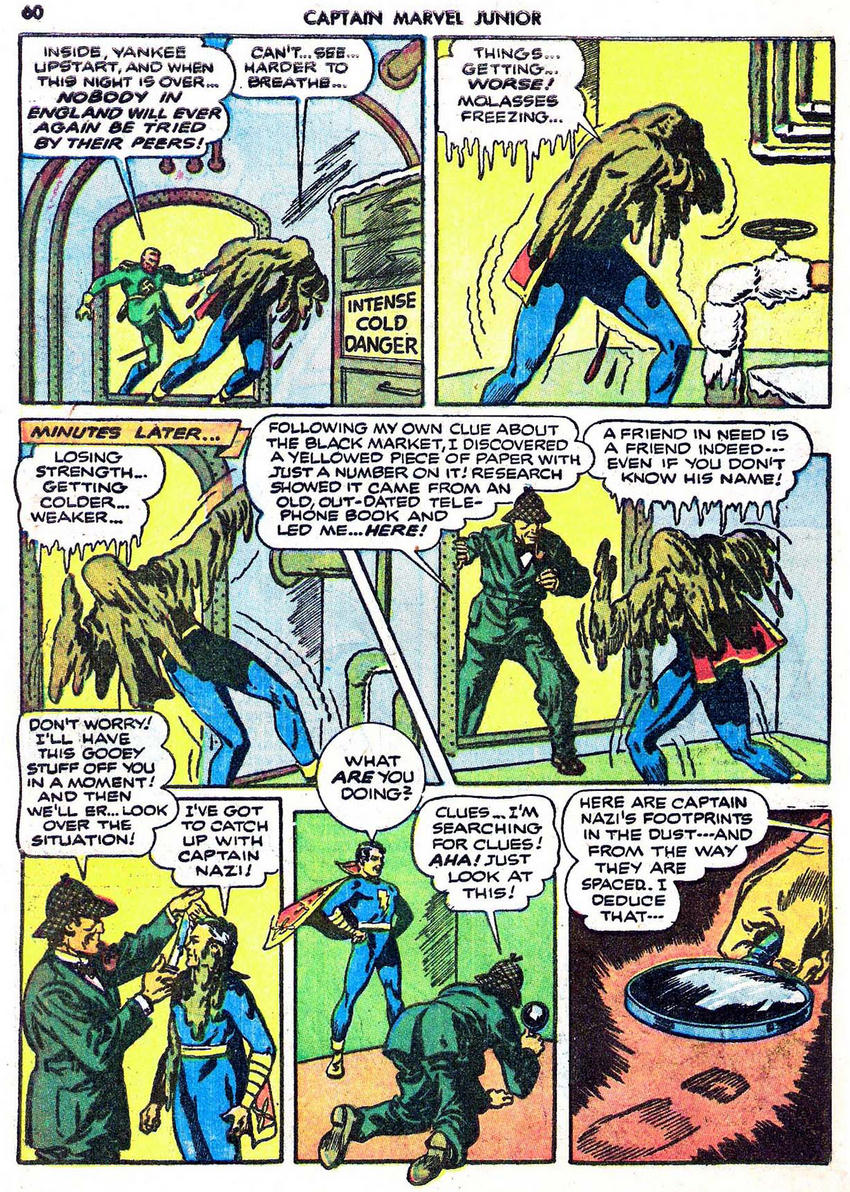 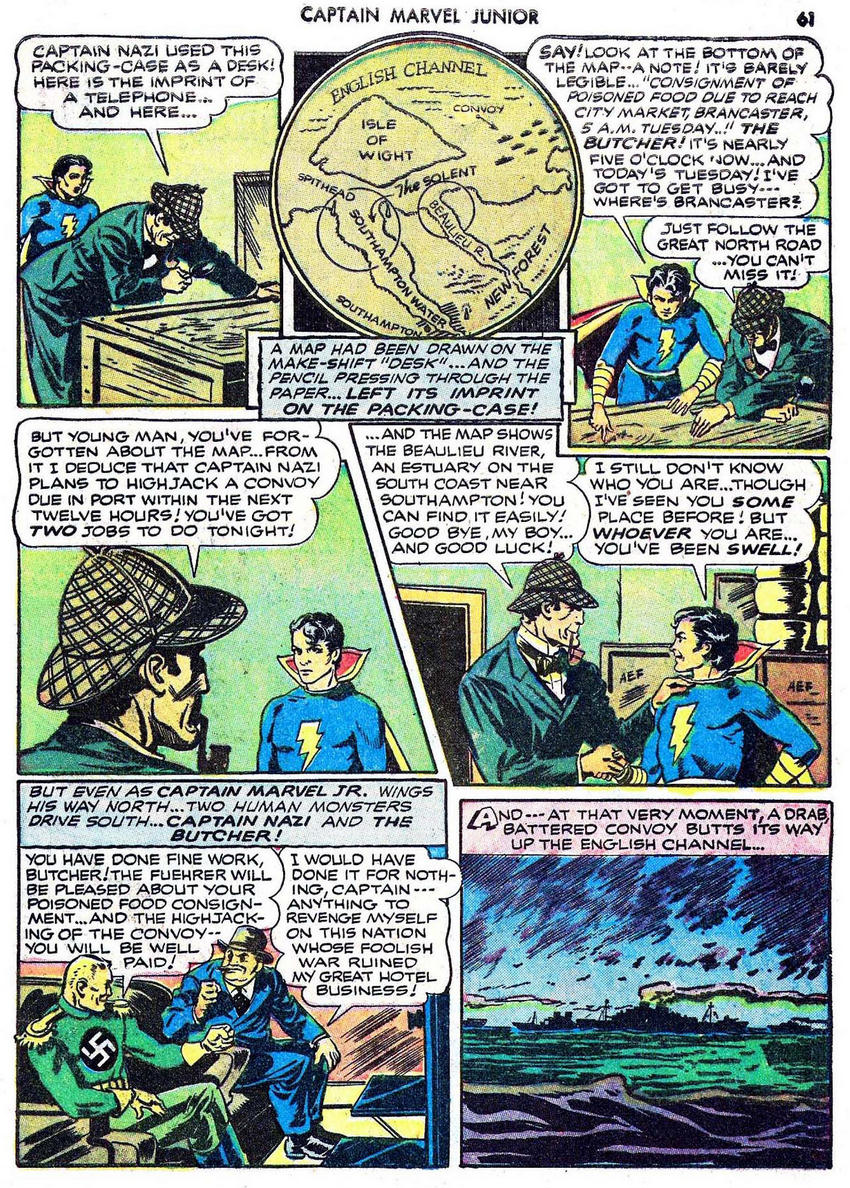 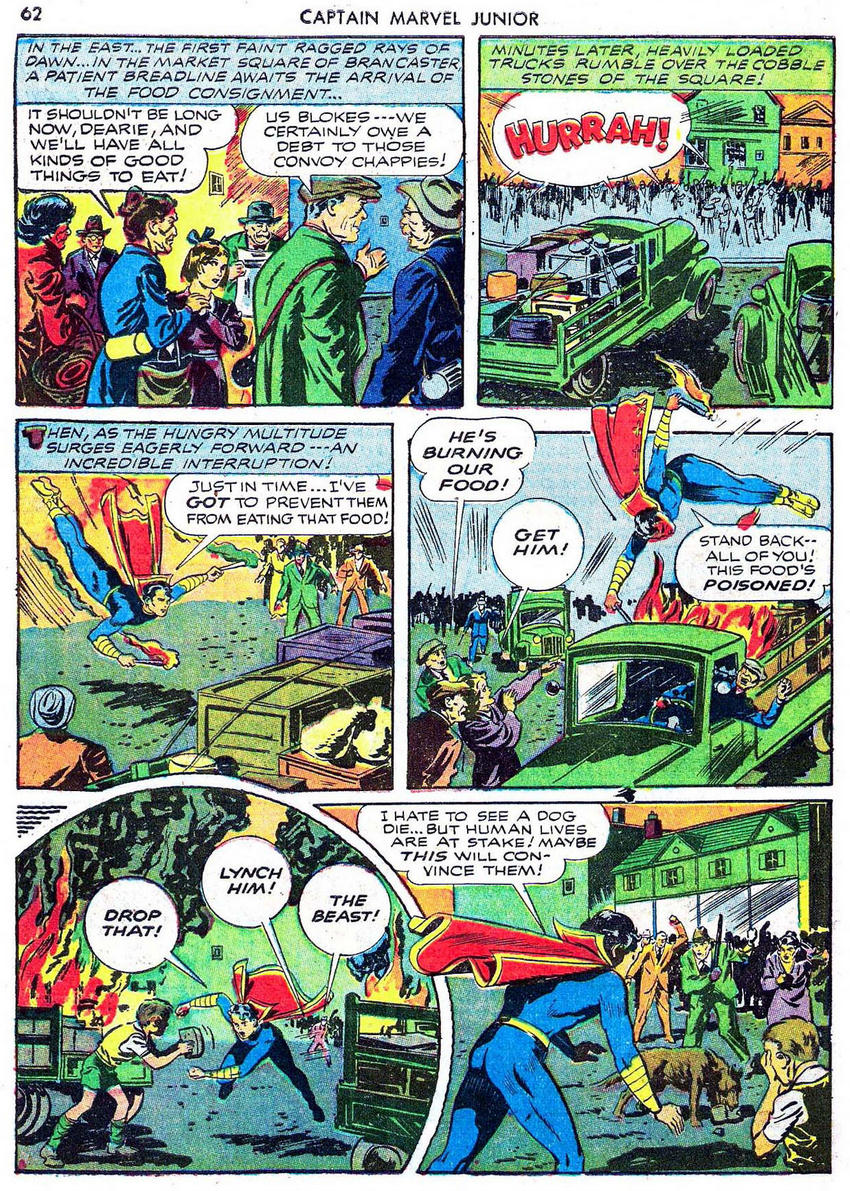 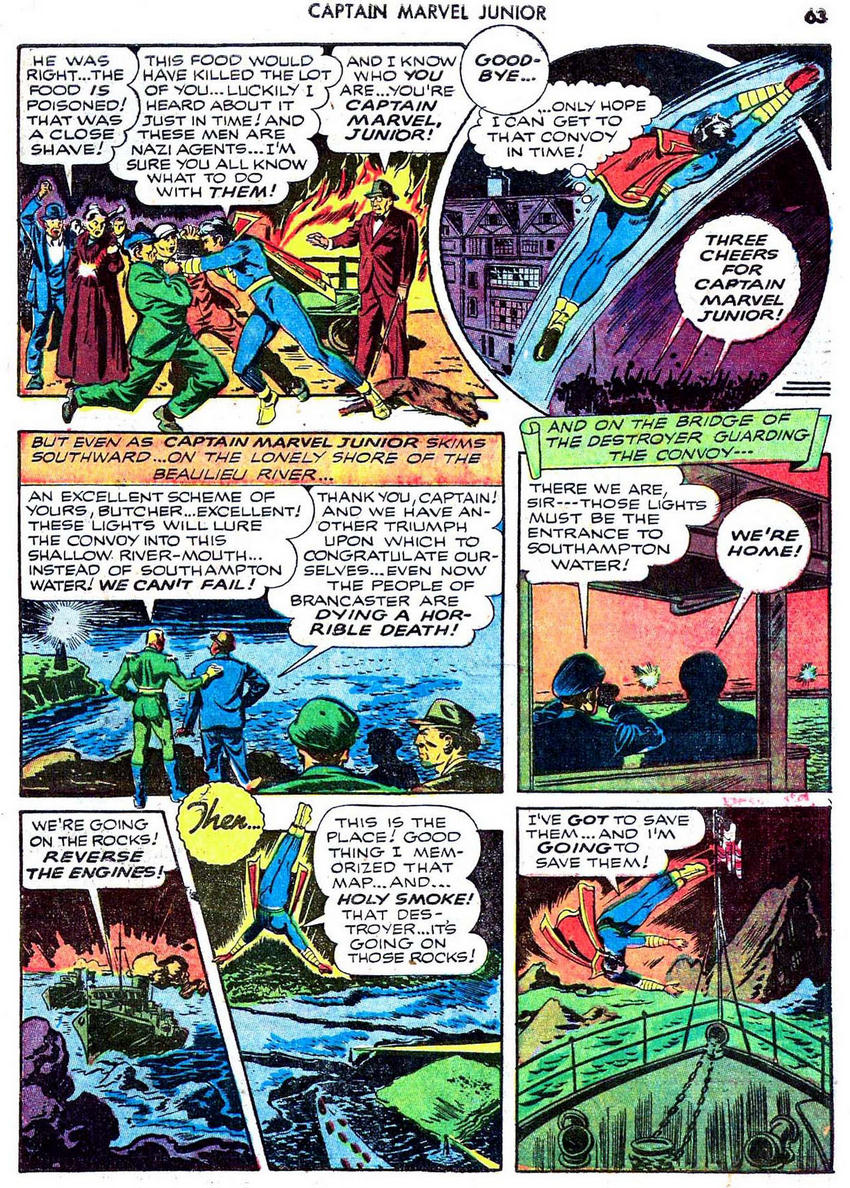 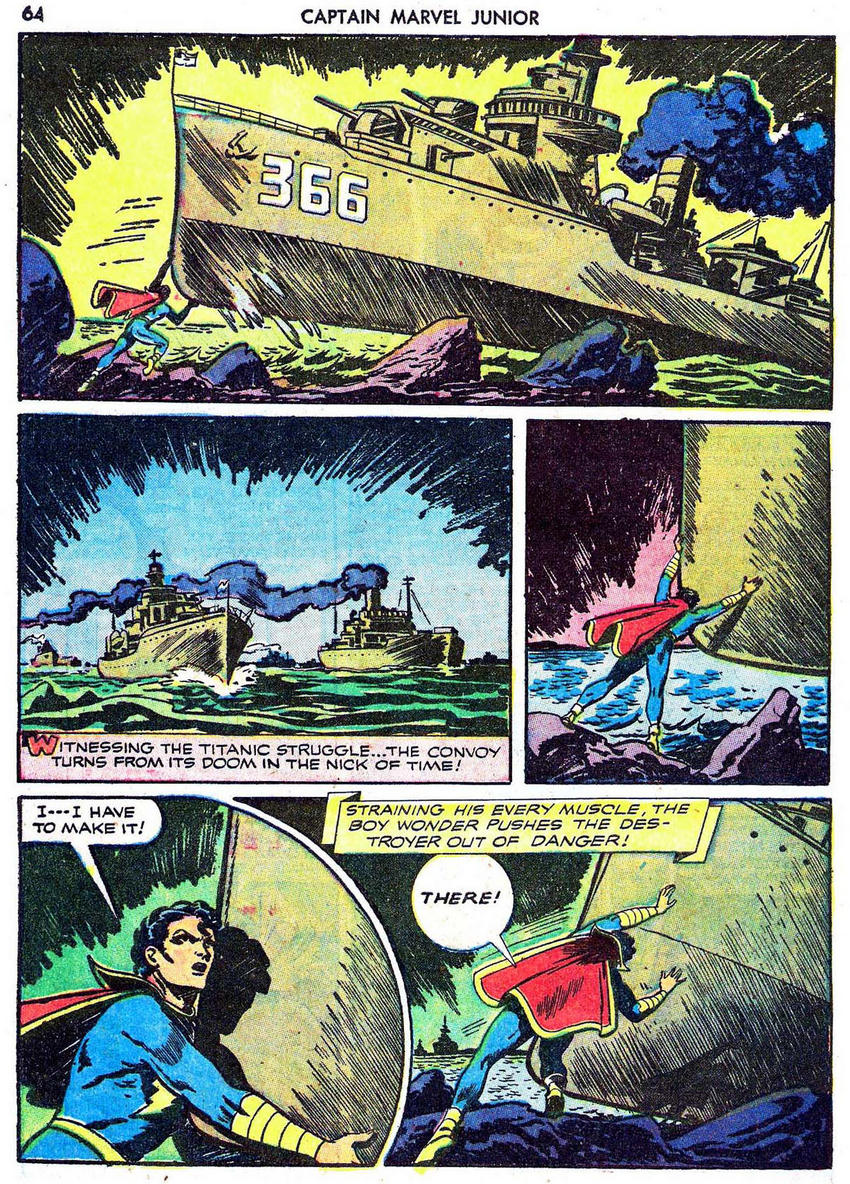 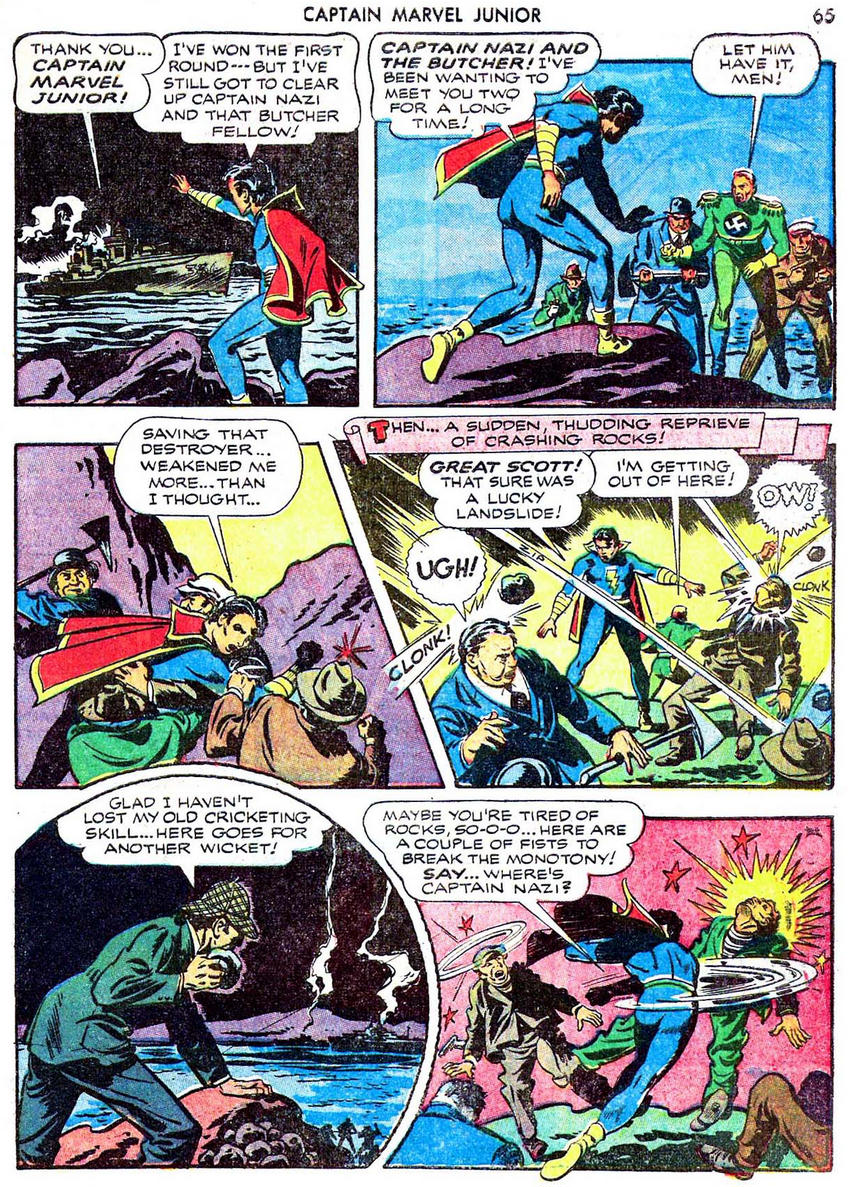 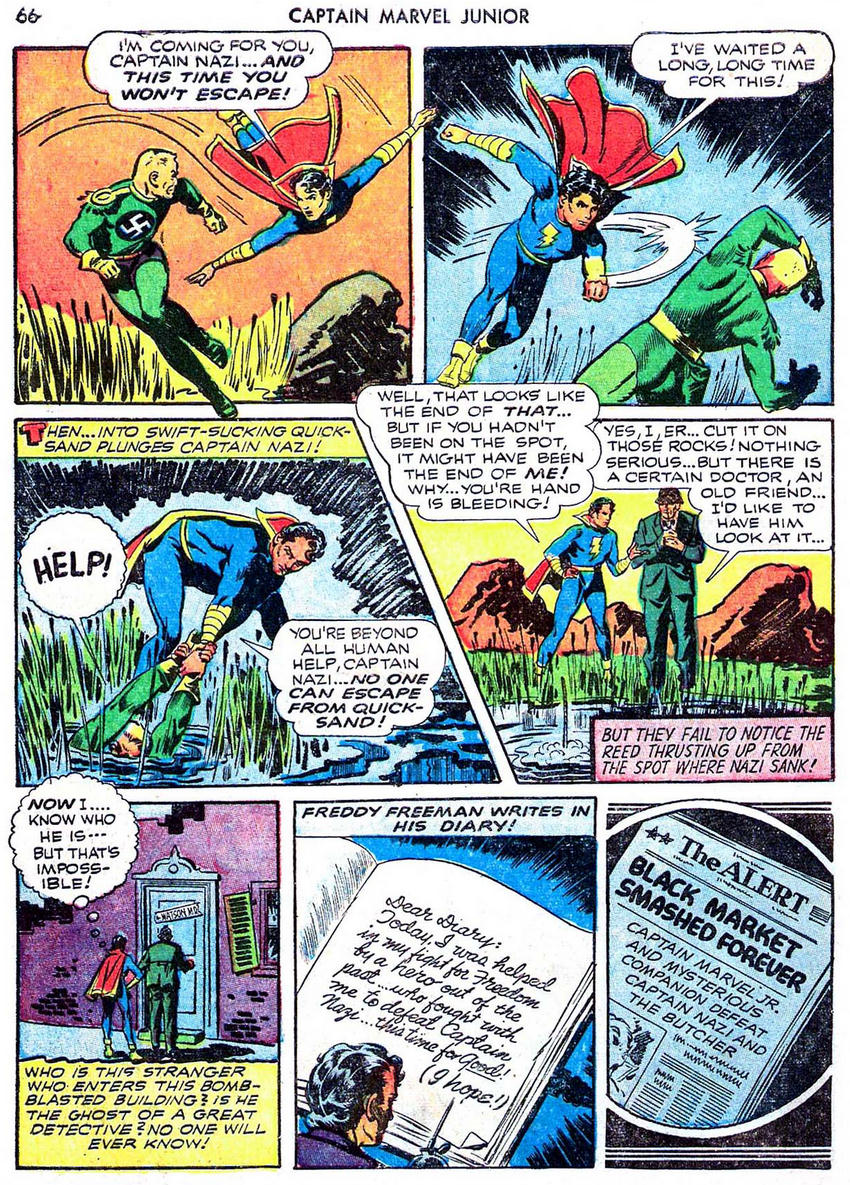 Captain Nazi! Boy, I love those propaganda war comics.
I think there's a late Sherlock Holmes movie (Basil Rathbone? I'm not sure) with him involved in a spy plot during the war.
Apropos of nothing, I'm intrigued by novels set in a world where Nazis occupied England. I recently read "SS-GB" by Len Deighton (old book, found it in the library where I work). Clever background, nice spy plot. Better than "Fatherland", anyway.
"Fighting with food"... great. A Lady Axis and a barrel of molasses would have been my cup of tea.

There's no market at all — black or otherwise — when one simply steals products and ships them elsewhere.

Actual black markets are markets, forbidden by the state. Black markets are about selling contraband or about bypassing wage and price controls. Wage and price controls are a means whereby the state conceals how it has reduced the value of the monetary unit that it controls. (Search costs and queueing costs are greatly increased, and goods and services may become simply unavailable, though listed prices are held steady.)

And it was that sort of black market — markets where states were attempting to conceal the cost of war by inflating the money supply, by administrating prices, and by rationing products — that the states fighting World War II were principally concerned to suppress.

(The people originally called “liberal” wanted the price of war to be overt, so that war would not be made less repugnant by financial illusion. Thus, it was especially in times of war that they objected to wage and price controls, and to deficit spending.)

Meanwhile, it pains me to read Freddy and especially this alleged Holmes repeatedly say “[ha]ve got” where “have” is proper!

"Three cheers for Captain Marvel Junior, who poisons dogs to save his own tights-clad ass!"

D'ya think any of the characters ever felt silly saying "Captain Marvel JUNIOR?" I remember reading that Stacy Haiduk, Lana Lang on the 80s "Superboy" TV show, felt that way always having to call out, "Superboy!" But "Junior" is even worse. I mean, this guy was popular back in the day! Elvis loved him! Even patterned his look on him! I wonder if Junior felt gypped when Shazam gave him his powers: "Wow. This other dude becomes a hunky adult when he transforms AND has a cool name, but I stay my same skinny size and have to be called 'Junior.' Thanks heaps."

A number of years ago, DC put out a 12-issue mini (which, thanks to publishing irregularities, took more than a year to complete) called "The Trial of Shazam," which featured Freddy Freeman going through a Herculean journey to become the new Shazam, complete with Capt Marvel's outfit. Almost immediately, DC undid the whole thing. Freddy got screwed again.

Back to the old stuff: Considering the fact that Capt Nazi killed Freddy's grandfather and crippled the poor kid, Junior is awfully cheeky during their fights. It would be like Spider-Man cracking wise with the original Green Goblin after Gwen Stacy's murder. True, this was for kids, but a little rage would have been appropriate here.

I'm a huge Holmes fan--the authentic Holmes--and always get annoyed when the old non-canonical cliches rear their ugly heads, or even some "new" ones, as in this story. SH never smoked a cigarette in a holder nor a meerschaum pipe, and the ear-flapped deerstalker was strictly for country cases; he never wore it in the city. I know that stuff is short-hand used for the general public, but it still gets to me. BTW, even though Holmes is not named in this story, the artist still sneaks in that door sign for "Dr. Watson."

Pretty good plot, though. Fawcett certainly took care with their stuff, which is why Capt Marvel was top of the heap in the forties.

Thanks for posting that cool story.

Fawcett was always a little confusing about Captain Nazi, though.
Sometimes he had some super-powers
& other times (like here) he doesn't
seem to.

PS - Did not realize that cheese was a "weakness" of The Marvel Family!! ha ha

Daniel, my wife recently brought home some WWII ration books she found at a thrift store. I had never actually seen them, but had heard plenty about them from my parents and others of the WWII generation.

Anyway, reading the instructions in the booklets was enough that I thought, "bring on the black marketeers!" I would have rather broken the law than have to hassle with rationing, as unpatriotic as that sounds. Since then our government has not forced us to ration during times of war, which is probably because the folks at home don't complain as much about those additional "costs" of war. If everything is otherwise normal then...we're in a war? So?

Incidentally, I recently saw a documentary on North Korea where a large underground economy has been built up. When a soldier tried to stop a woman from using a horse and cart as an impromptu bus service she cursed the soldier and shoved him. In the U.S. that resistance to law and order would get you shot. In that case the soldier wisely backed off. In North Korea they obviously turn their heads at these sorts of dealings with unregulated goods and services because they fill a need.

Ryan, I wonder if the character of Junior wasn't a response to a healthy Billy Batson saying a magic word and becoming a man. In Freddy's case, he had a physical disability ("crippled" in the old-style parlance) and yet gained super powers. I'm not Shazam, so I can't tell you the exact reason.

There has always been a lot of talk about Elvis using Junior as a model for his style; Elvis even wore a cape along with those elaborate Las Vegas cover-alls he used late in his career. I wonder if Junior wasn't popular with some people because he seemed more realistic. At least more realistic than hollering the magic word and becoming a large, muscular man.

Jim, I have wondered about some Golden Age comics, whether when the editor assigned a story he gave the writer a backstory, or just left it to the writer's imagination. That would be true of a character with a now-you-see-it-now-you-don't superhero power. Or, a serious case of don't-give-a-crap about the characters or continuity.

J D, if you find a copy of The Man In the High Castle by Philip K. Dick, you'll read a story about the United States taken over by both the Japanese and Germans; the Japanese have the western half, the Germans the east. It's been many years since read the book, so I don't remember if the Italians were able to join in the war spoils. They already had a large population in the New York area. Maybe the Germans would have let them keep it without messing with them too much.

Oh, yes. "The grasshopper lies heavy" and the "Cold War" between Germany and Japan.
Great book, with a point to prove. No, no "spoils" for us.

@Ryan I don't think Cap Nazi has the ability of seeing the ridiculous side of life.

One might also mention “The Two Dooms”, a 1958 novella by Cyrl M. Kornbluth, an alternate future in which the Germans and Japanese had won the Second World War.