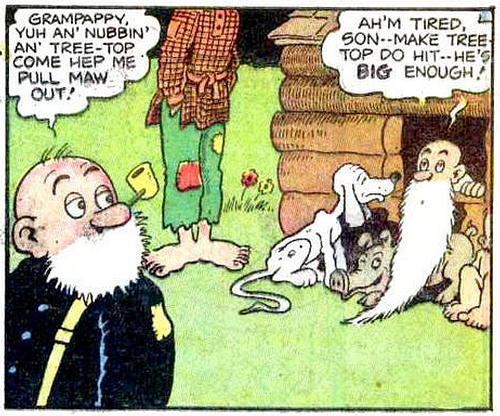 This 12-page backup to a 52-page (!) Sparky Watts story by Boody Rogers is from Sparky Watts #2. Both stories are compilations from Boody’s time as a newspaper comic strip cartoonist.

It is a Li’l Abner-styled strip about hillbillies. The men are lazy, and the women are smarter than the men. Or are they? They end up doing all the chores. Well, I guess someone has to, and if that man won’t get his lazy ass out of bed then I guess it is up to the womenfolk. In this case the lazy men are Tree-Top, Grampappy, Nubbin and Pappy (no relation). Tree-Top, despite being the title character, is basically a supporting player in his own comic strip. 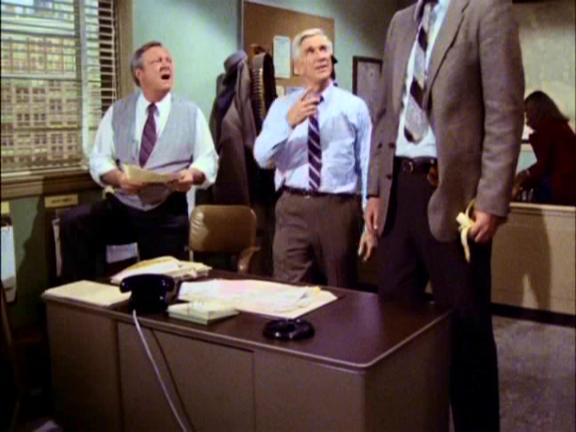 Tree-Top is so tall his head is never shown. That is a funny sight gag, and forty years later, in 1982, it also showed up in the six-episode TV series, Police Squad. In this screen capture of a scene, Frank Drebin (Leslie Nielson) and his partner tell tall guy, Al, he has something on the side of his face. The series, made by Zucker-Abraham-Zucker, led to the Naked Gun movies. I don’t think they got the joke from Boody, I think it is just one of those things that people think of, independent of another’s ideas. Or, maybe they did get it from Boody. Surely, you don’t expect me to know. (“No, I don’t...and don’t call me Shirley.” Ba-da-bam! sound of snare drum rimshot.)

Whoever pasted up the strips made a mistake on page 8. Panels 3 and 4 are reversed. 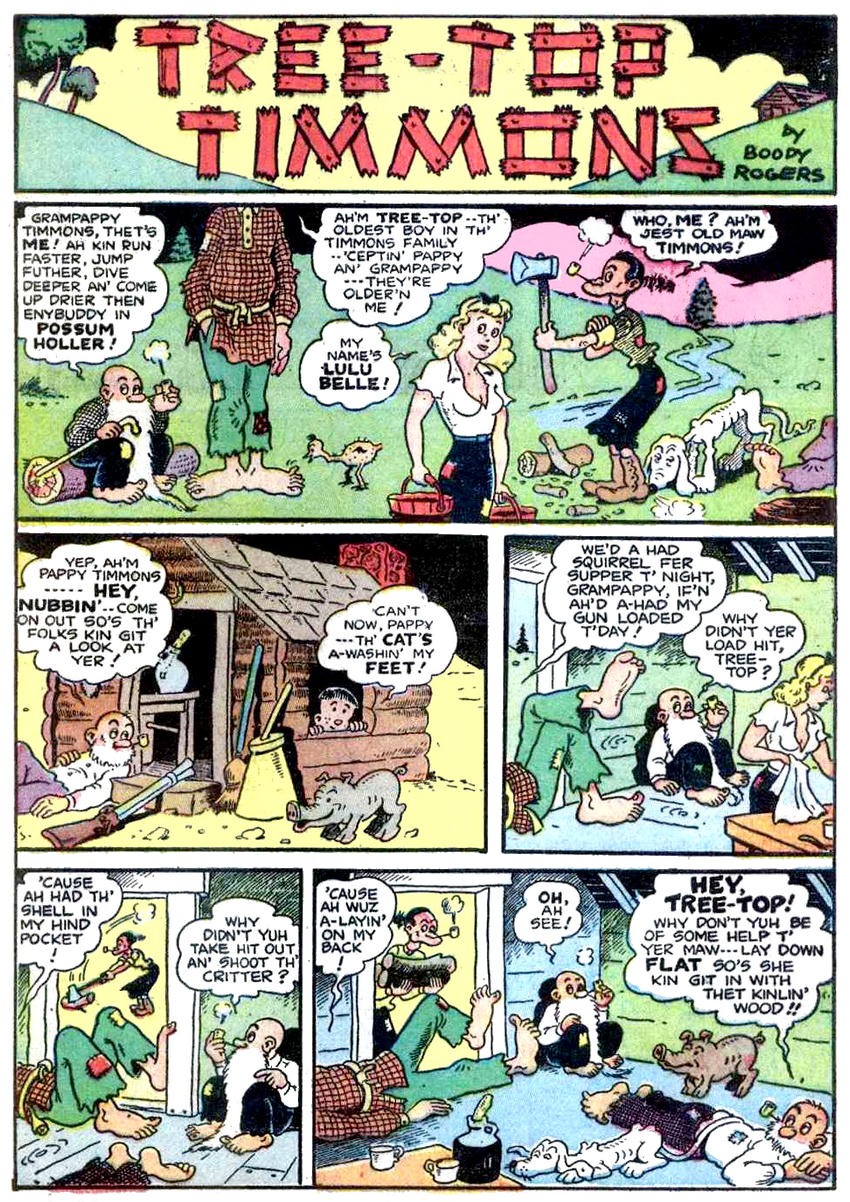 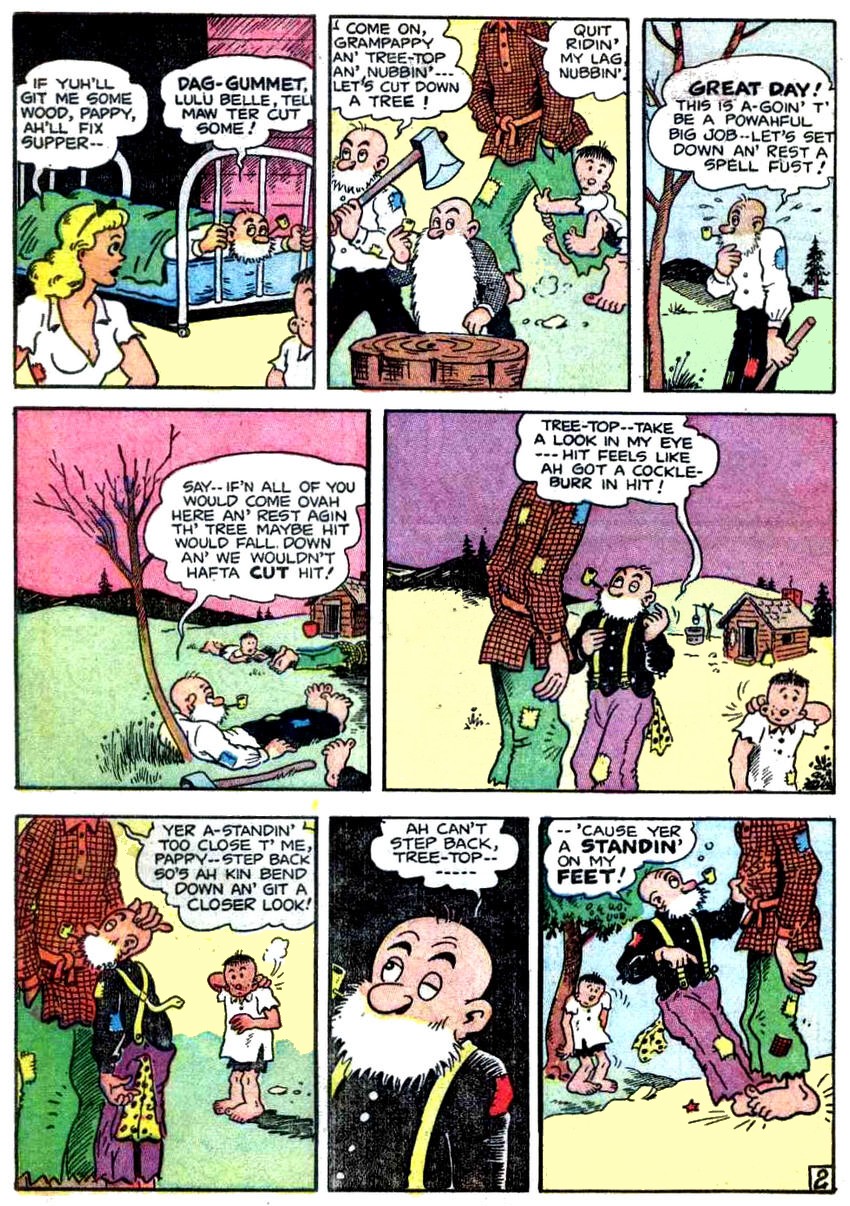 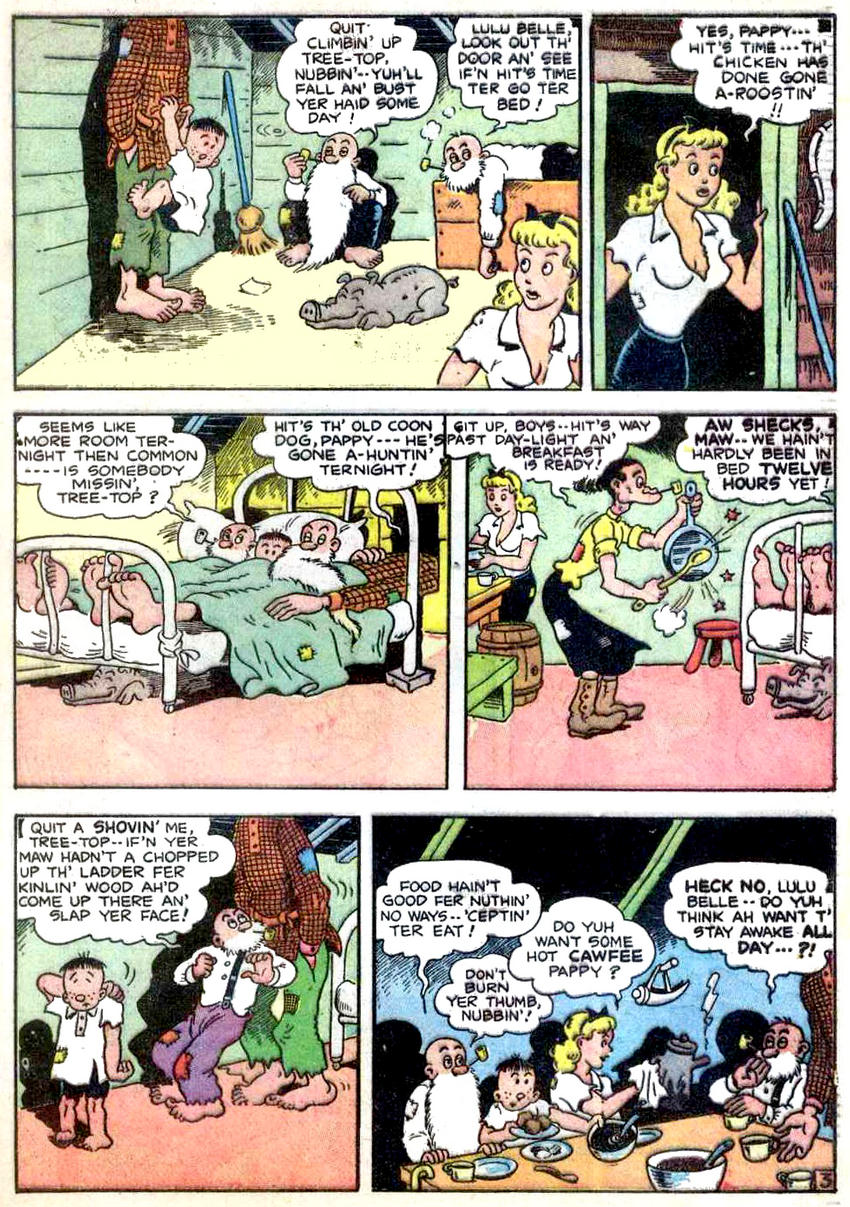 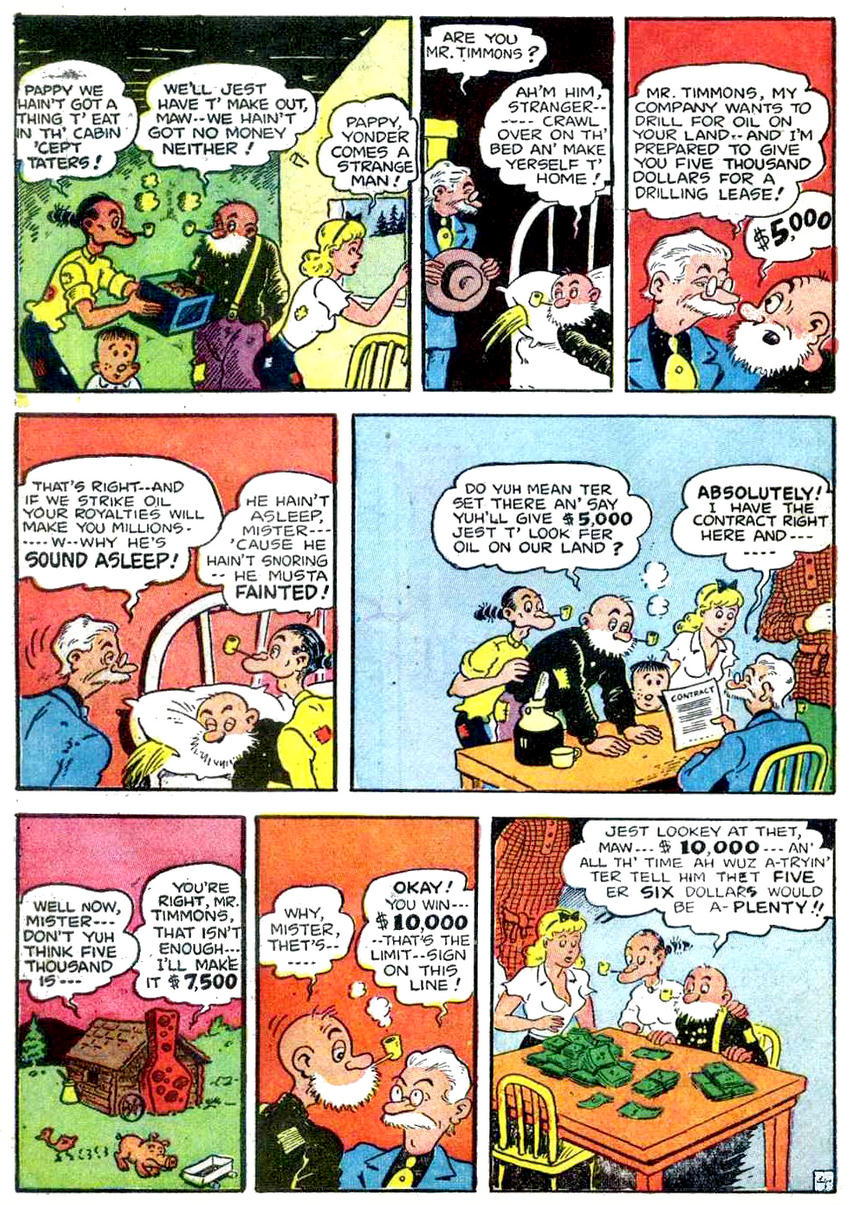 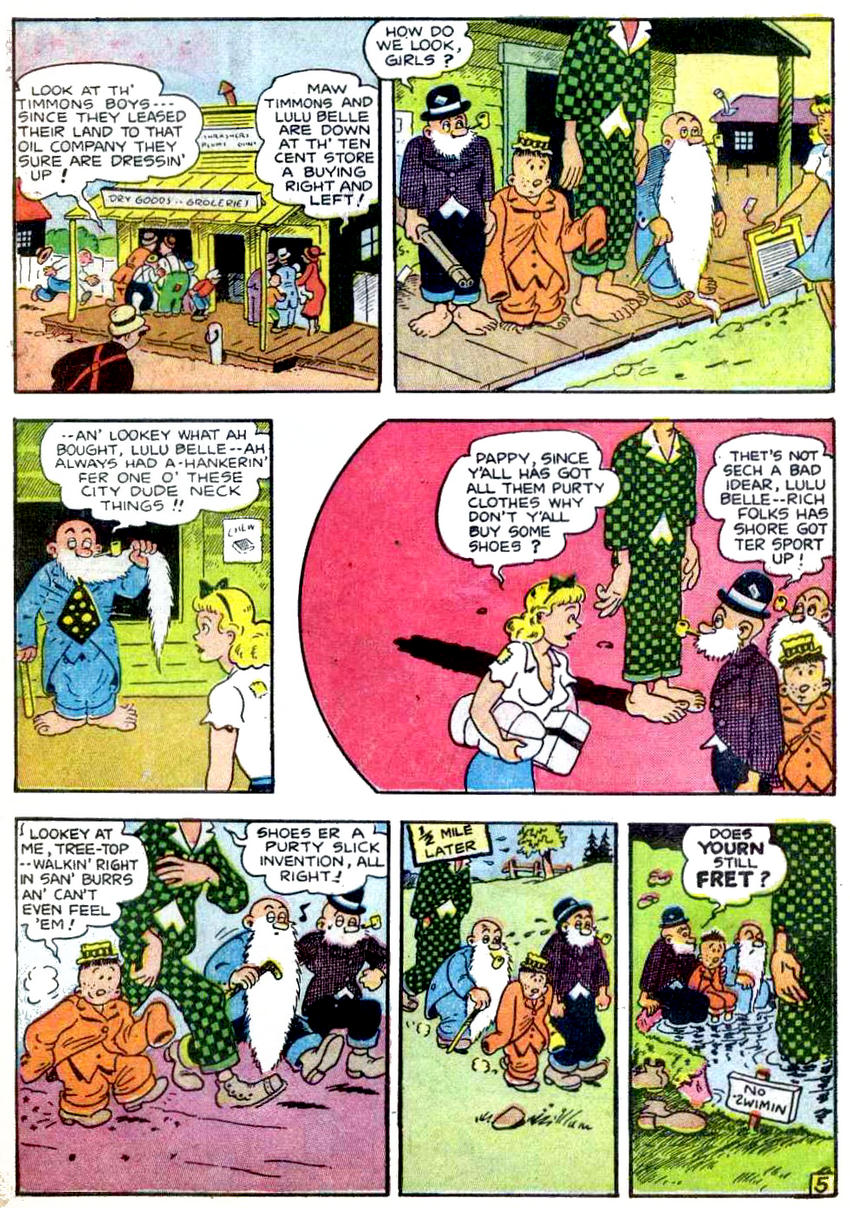 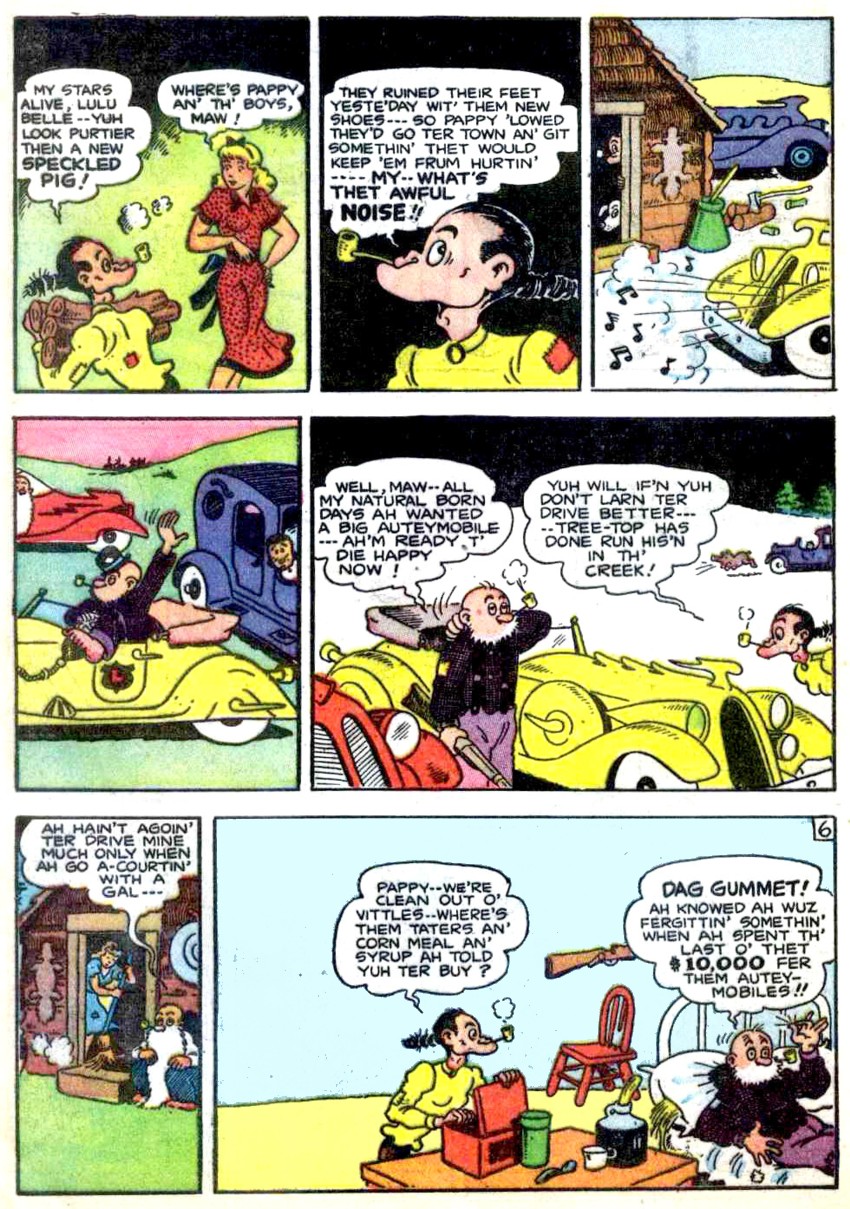 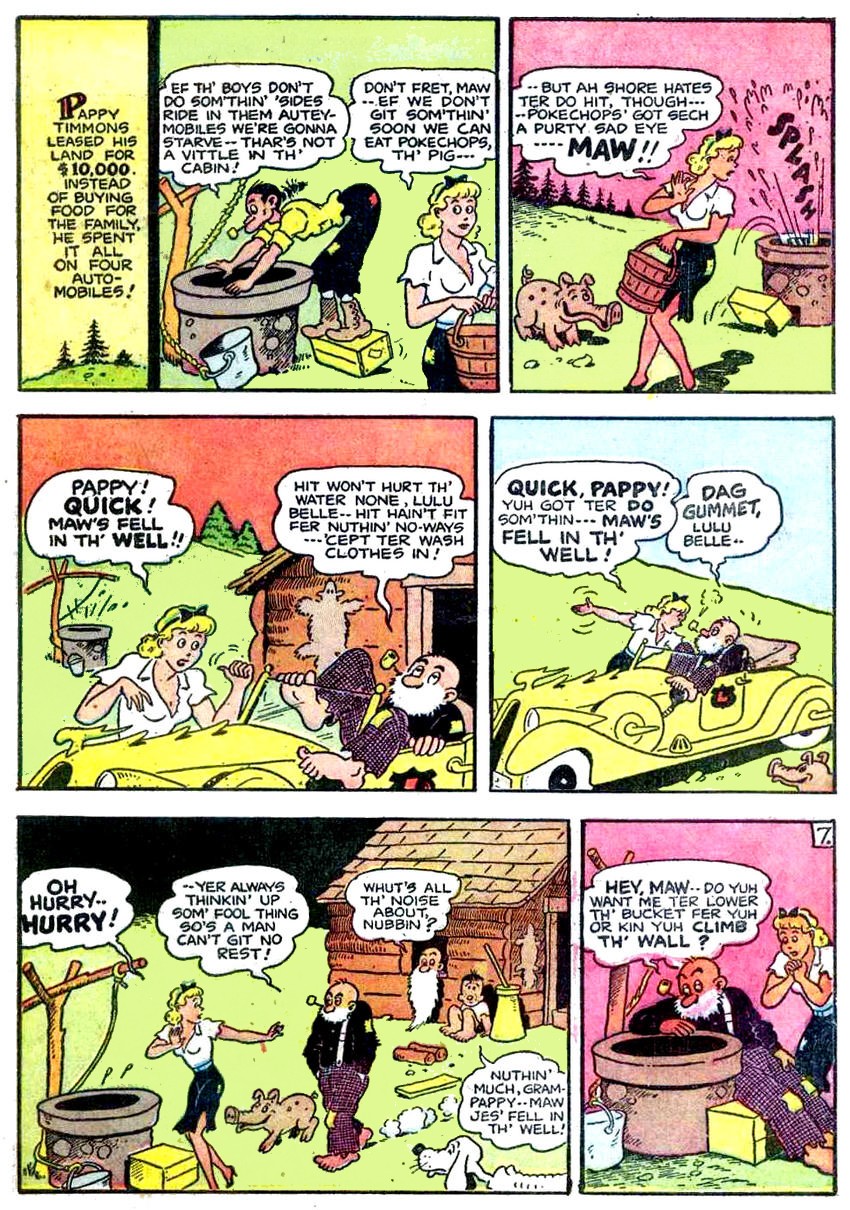 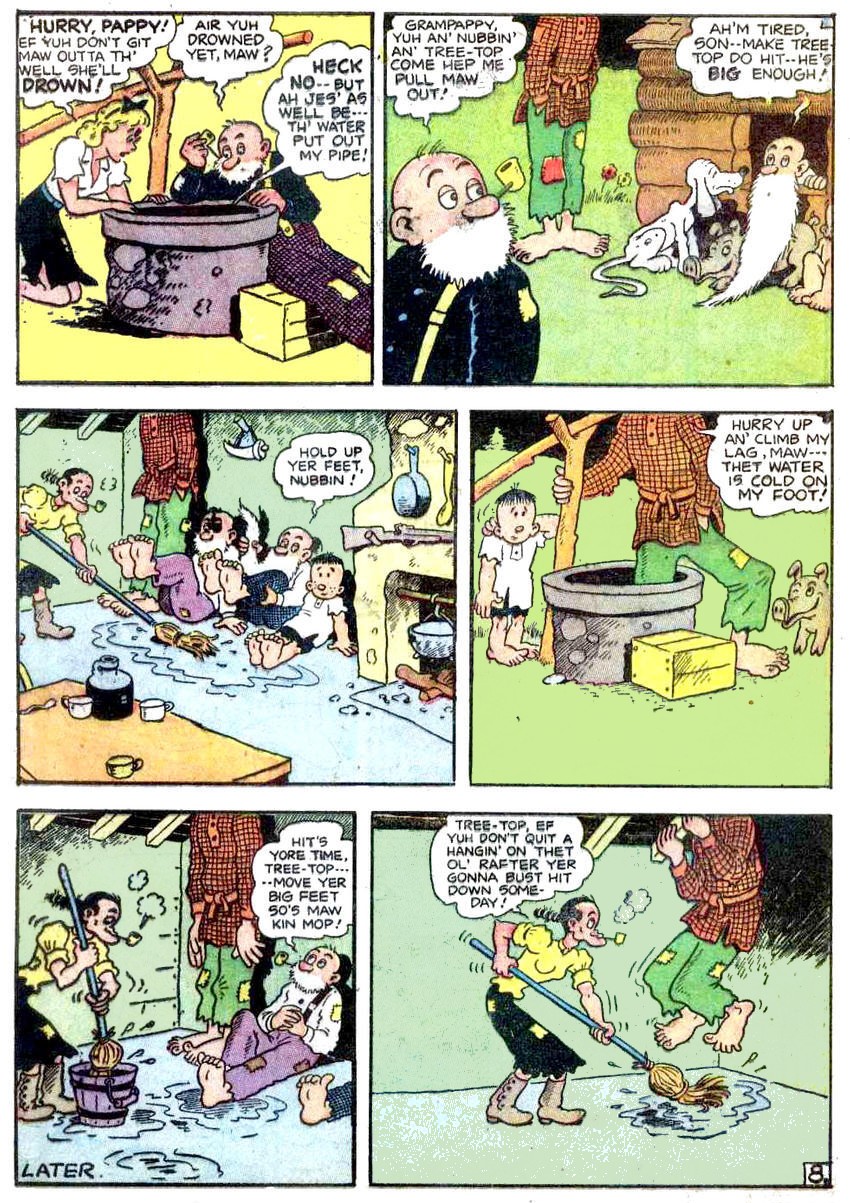 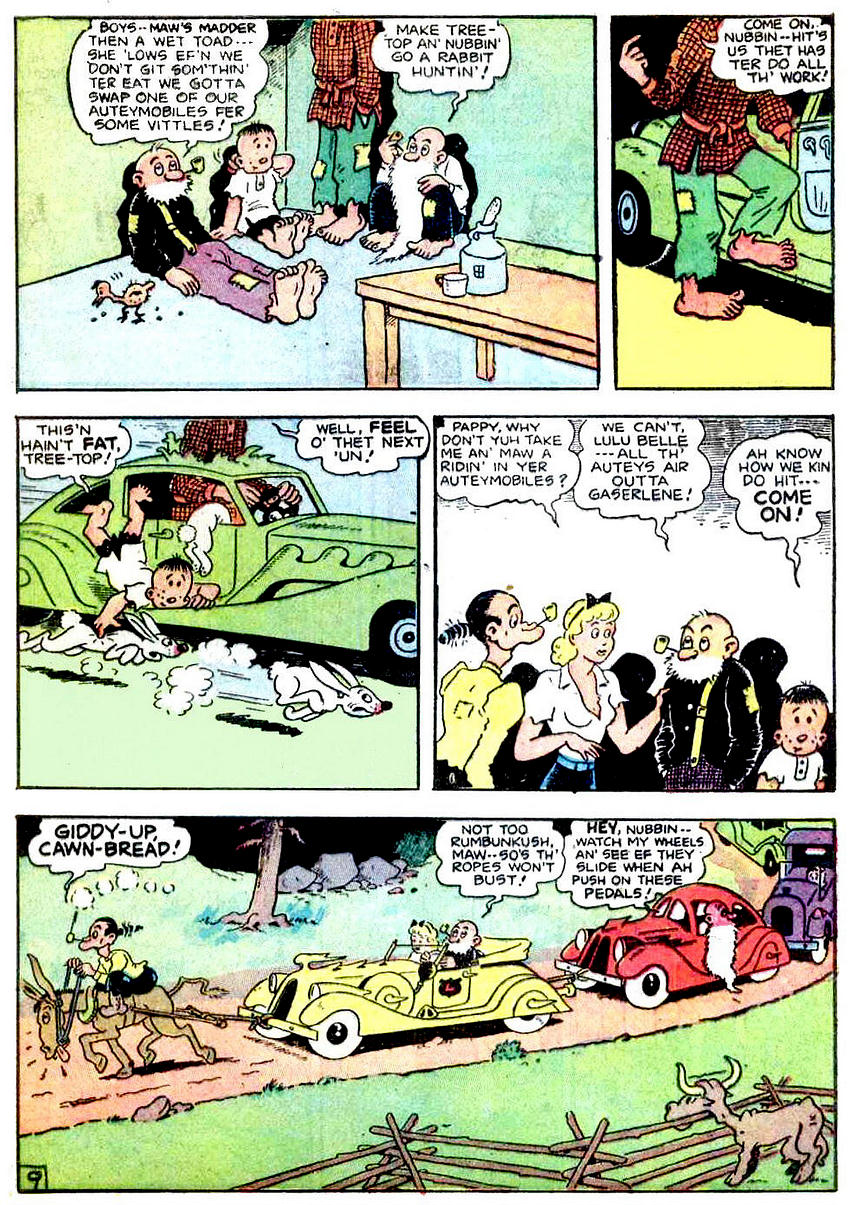 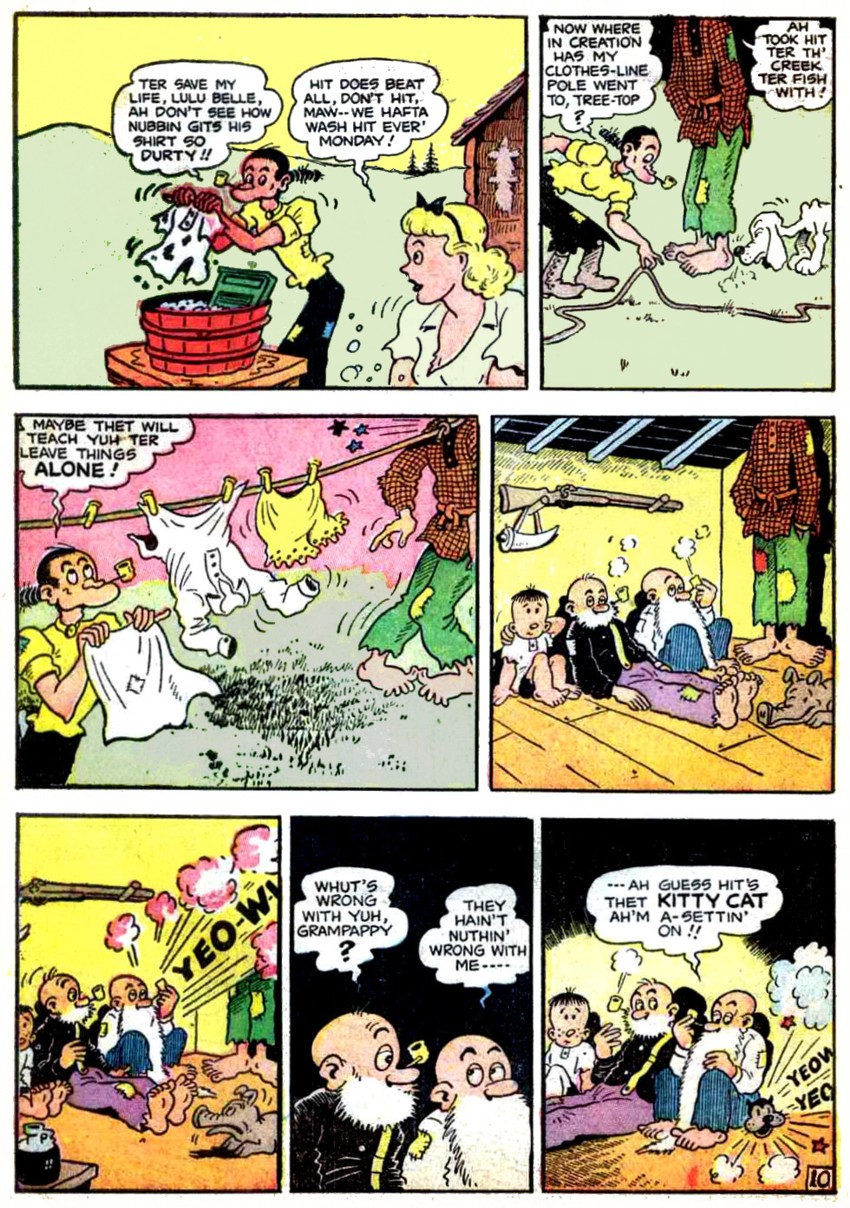 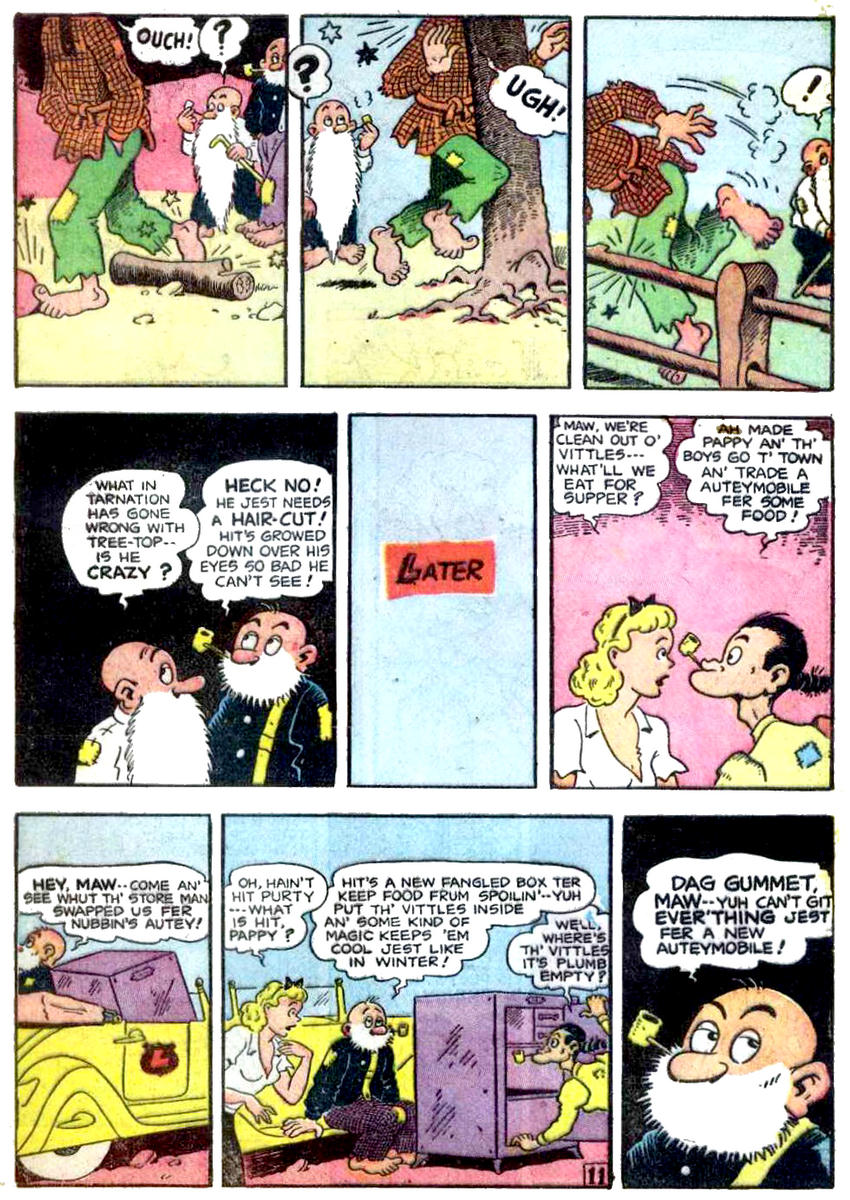 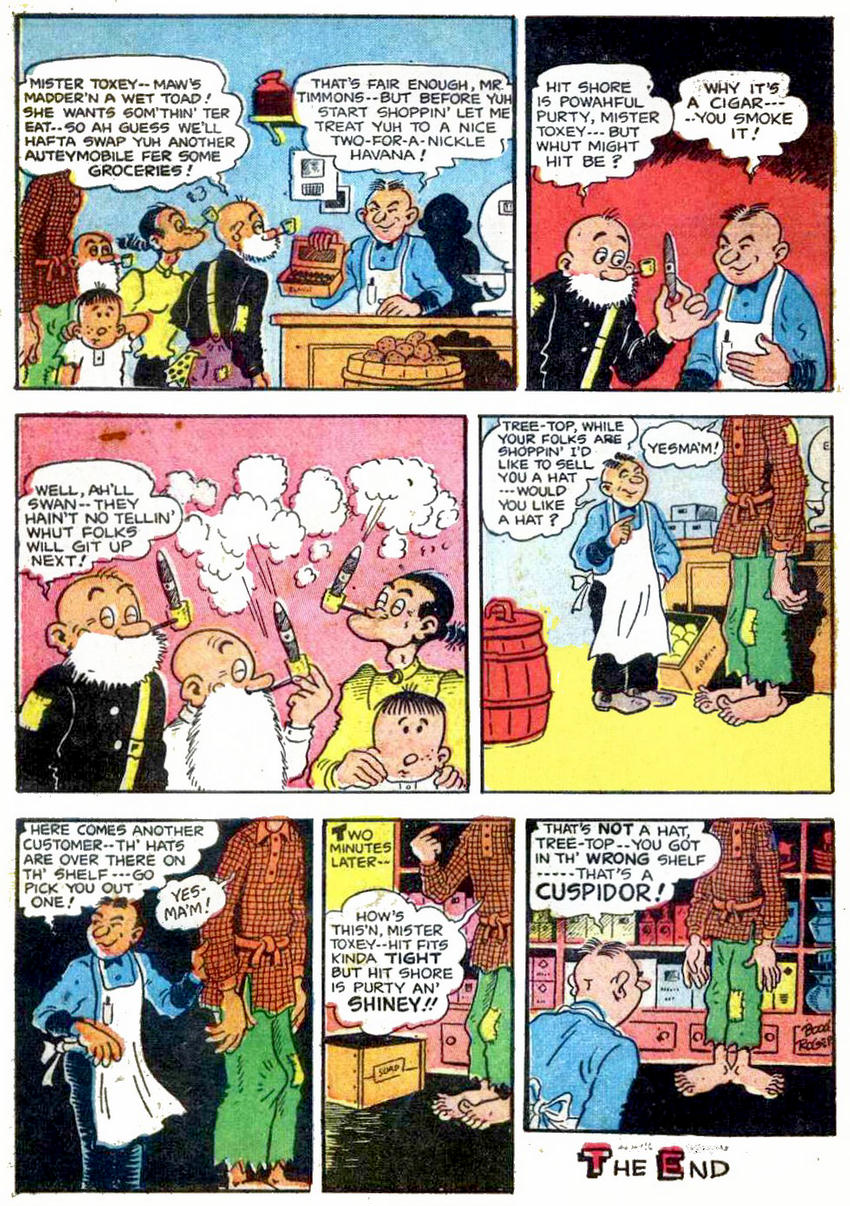 These "hillbilly" funnies are quite difficult to read!
Lil' Abner was popular in Italy in the 70's (so was Fosdick) and, come to think of it, the guy who translated it made a great job adapting its distorted language into a distorted italian.
You don't realize it when you read it, but boy, it's hard work!

I'm not entirely sure what to say about this one. I like Boody Rogers--as I mentioned before, I got the book you recommended, Pappy, and I have some coverless "Sparky Watts" comics from the 40s--but this one was kind of "enh." Reminded me of "Hee-Haw" more than anything else because it was episodic with a string of one-liners rather than having an actual plot. And I found all the characters unappealing (okay, except for maybe the cleavage-baring daughter). "Babe" was a much better strip; why didn't Rogers just incorporate some of these characters and situations into that? Well, I guess I knew what to say after all.

Yikes, I feel like I'm almost always critical about the stuff you post, Pappy, but I love what you do. I look forward to it every other day!

Ryan, I try to keep the postings surprising, keep them mixed up so the blog doesn't get routine and boring. I understand that they can't all be to someone's personal taste.

That was kind of what comic books in general were like for me. I read a lot of them I didn't care for. If I didn't like one I just went on to the next, which is what I advise on my choices to post. (I don't know if I've said this recently, but since my friendly neighborhood comic book store shut down I do not buy new comic books. It also has to do with the prices of comics. I am retired, living on a fixed income. 'Nuff said about that.)

I appreciate the fact that you comment, which is helpful.

J D, believe me, sometimes this colloquial/dialect style of "English" is difficult for those of us for whom the English language is our mother tongue. I find it cumbersome to "translate" the stylized dialogue in my head. Li'l Abner would have said the last of that sentence as, "in mah haid." That's not so bad, but when you try to read a long string of such dialogue it gets tiring.

It is true, too, that such dialect is more out of the writer's imagination than it is from the people they are satirizing.

I greatly admire translators who can take the finer points of one language and do them justice in another language, especially if they maintain the flavor and the humor and are able to convey those subtleties in their translation.

The gag of a character too tall for the frame was used in the Joe McDoakes short "So You Want to Be a Detective"(a spoof of Robert Montgomery's "Lady in the Lake"") wherein Joe as "Philip Snarlowe" encounters "The Tall Man."

J_D your English is excellent. Better than mine, I reckon. And thanks for some interesting links and insights you've been bringing to the comments.

Pappy, not only do you write well and funny but you have some fine regular commentators here. Ryan, Daniel œconomist, and several more who pipe in with some fun and knowledgeable stuff.

It cheers me to read this blog even if I get behind a few days. Only so much an old geezer like me can keep up with, I guess. =sigh=

7f7, "Only so much an old geezer like me can keep up with, I guess. =sigh=" Listen here, young feller...when you reach official geezer status, like me, you'll find how tough it really is to keep up. I'll leave the interpretation of "keep up" open.

Anyway, thanks for your note. I am really happy you enjoy what you read, both in the blog and the comments.