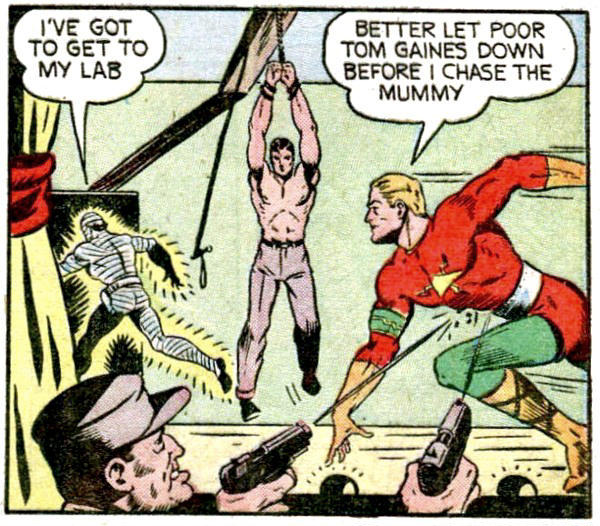 This past March, in Pappy’s Number 1706, I showed a story of the villain, the Mummy, from Lightning Comics #5 (1941). Flash Lightning conquered Professor Vatz, the scientist who put on mummy bandages and coated himself with “radium paint” to make himself invincible. Professor Vatz is now in prison, but is given enough freedom to make himself some gas bombs, re-outfit himself in gauze bandages and re-coat himself in radium paint. He is even in possession of a gun that shoots nitroglycerin bullets. Huh. Must be one of those cushy federal prisons, like Club Fed.

There are also other actors in this drama: the warden’s daughter, a prisoner who claims he was framed, and at least one African-American extra, a prisoner who pops out of the first panel of page 11. Just making note of it, and also that it is of its time, almost 75 years ago. And for some reason that is also the page that artist Jim Mooney signed. 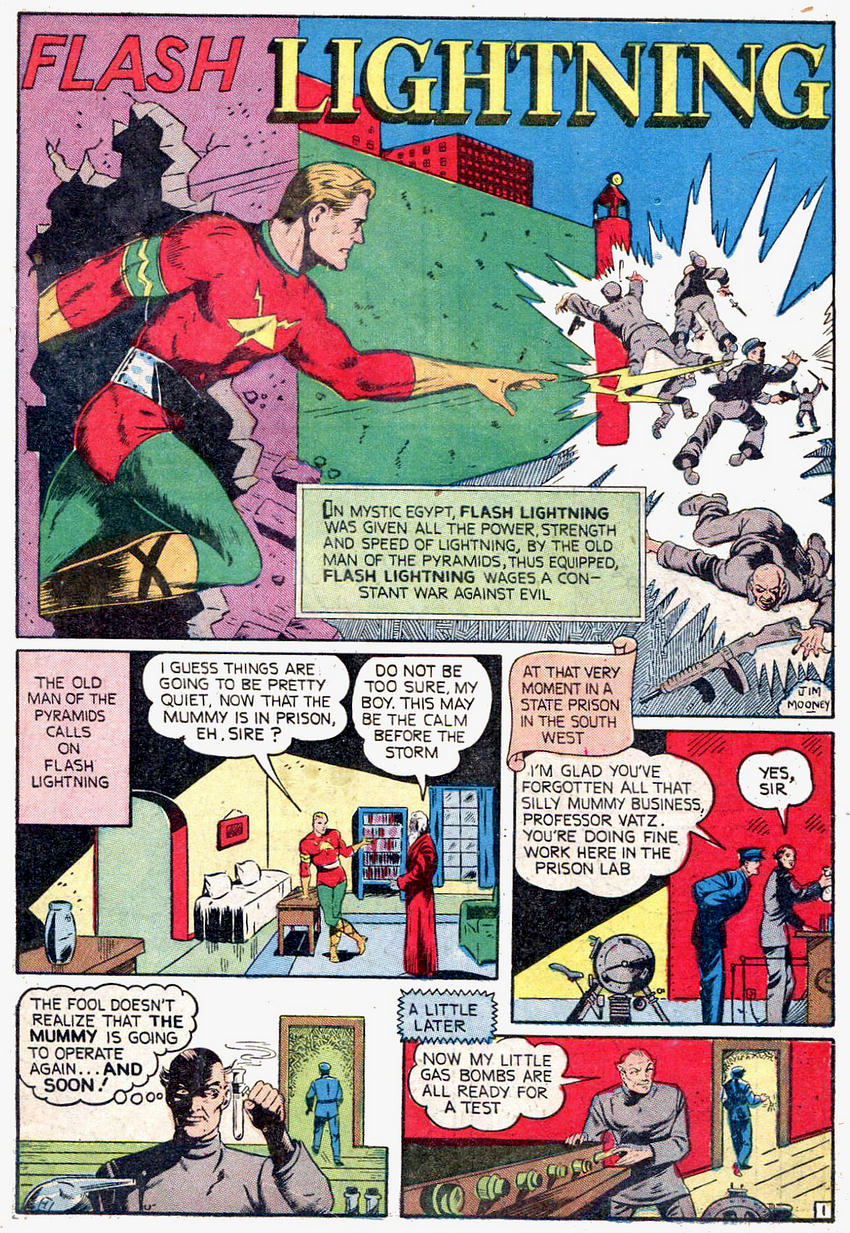 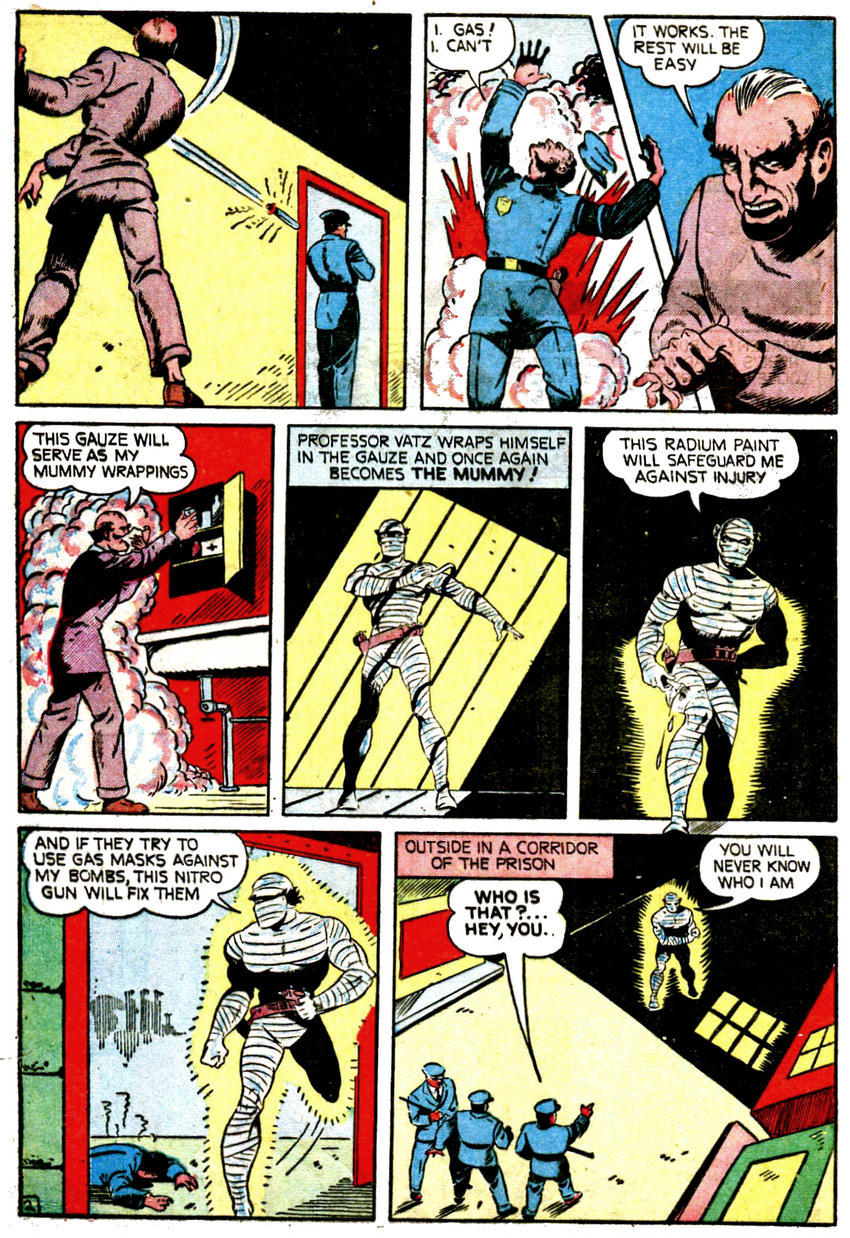 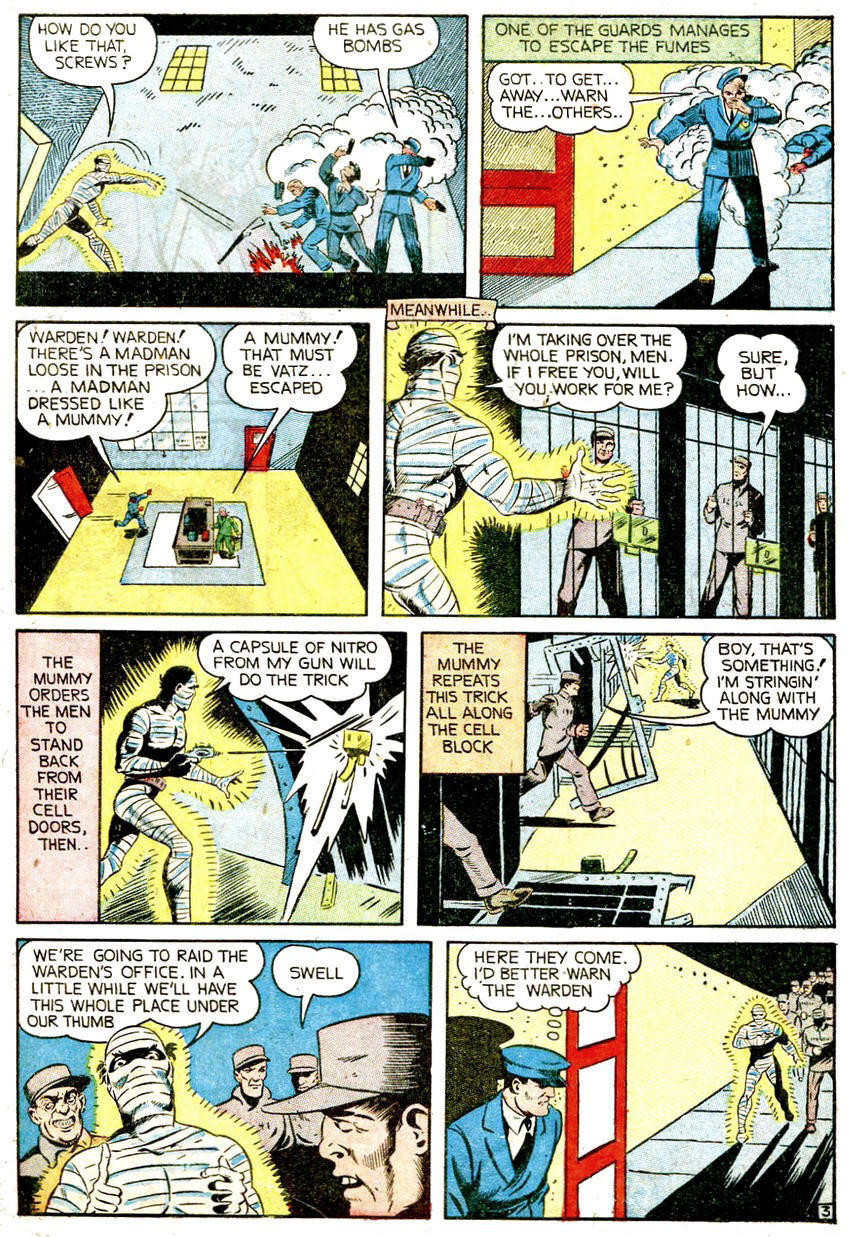 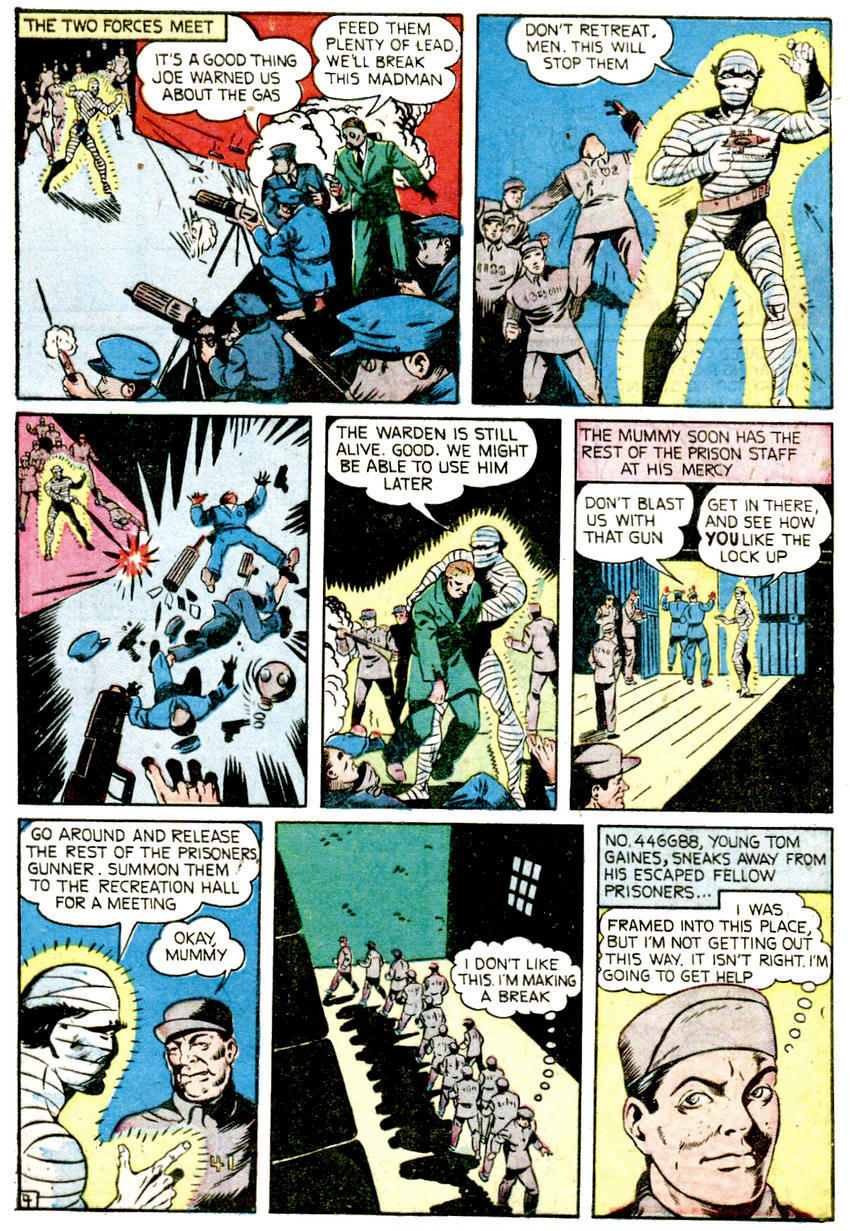 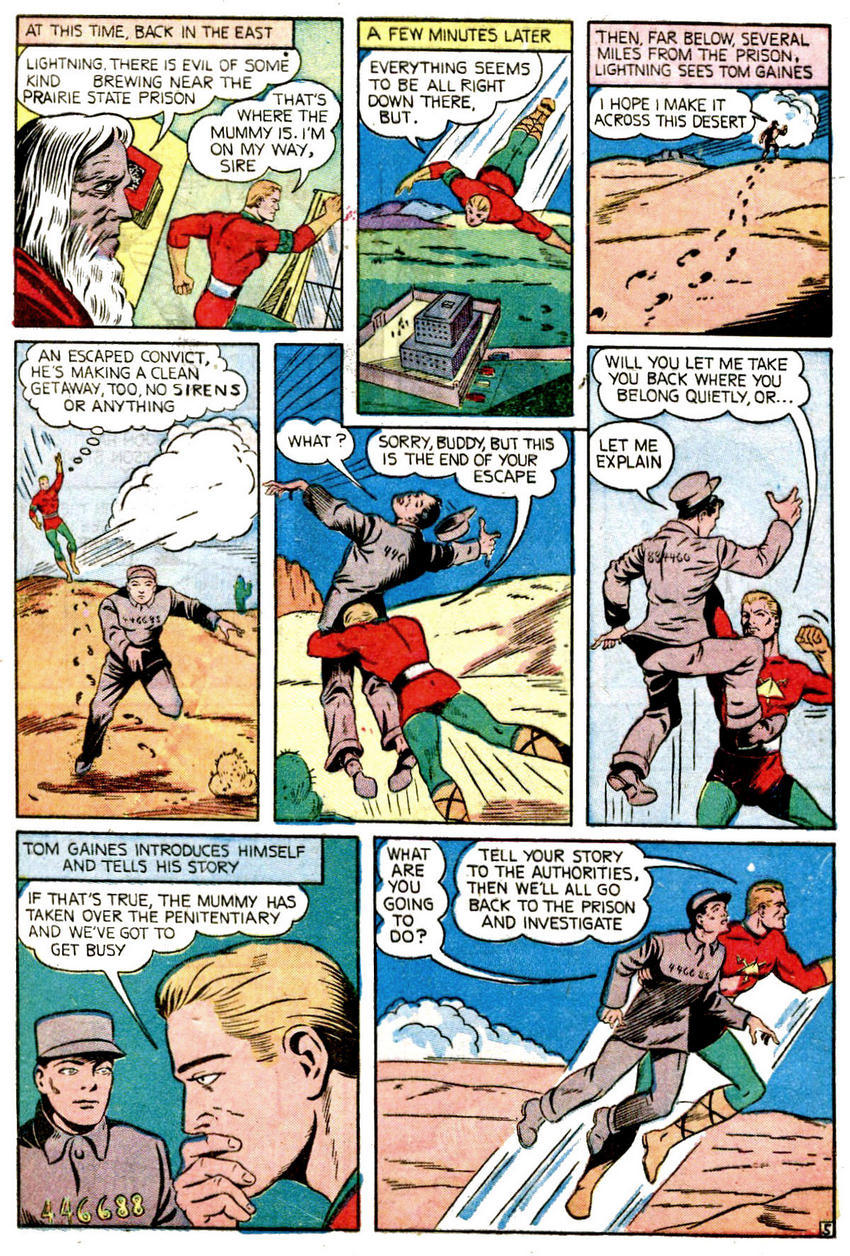 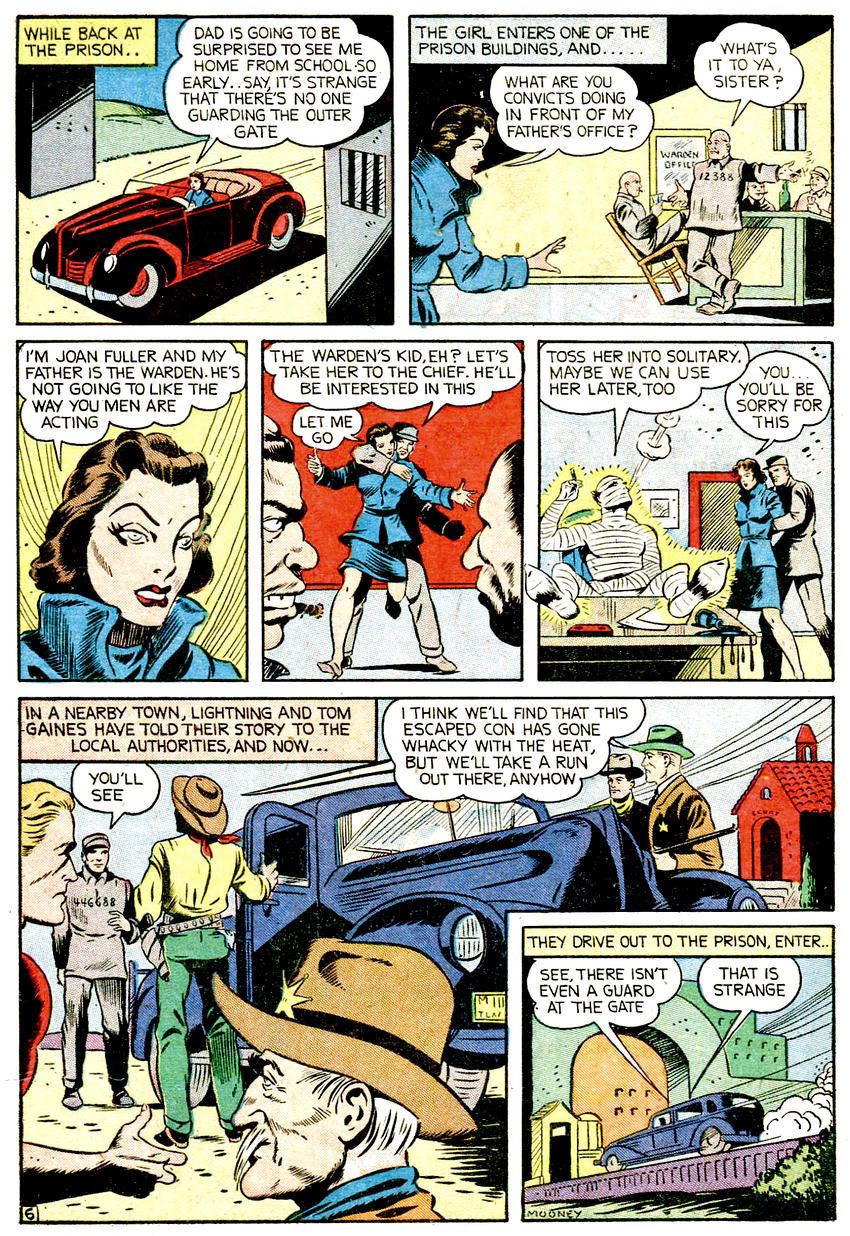 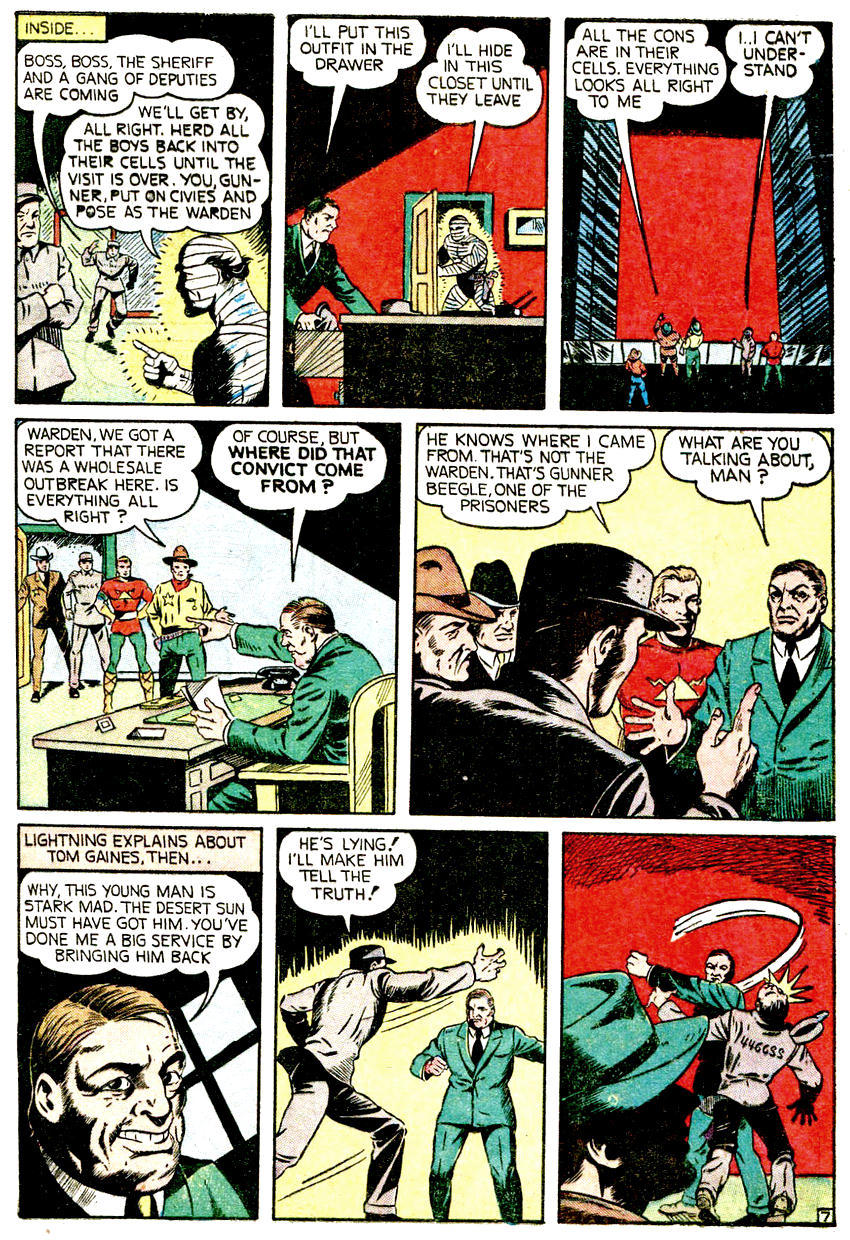 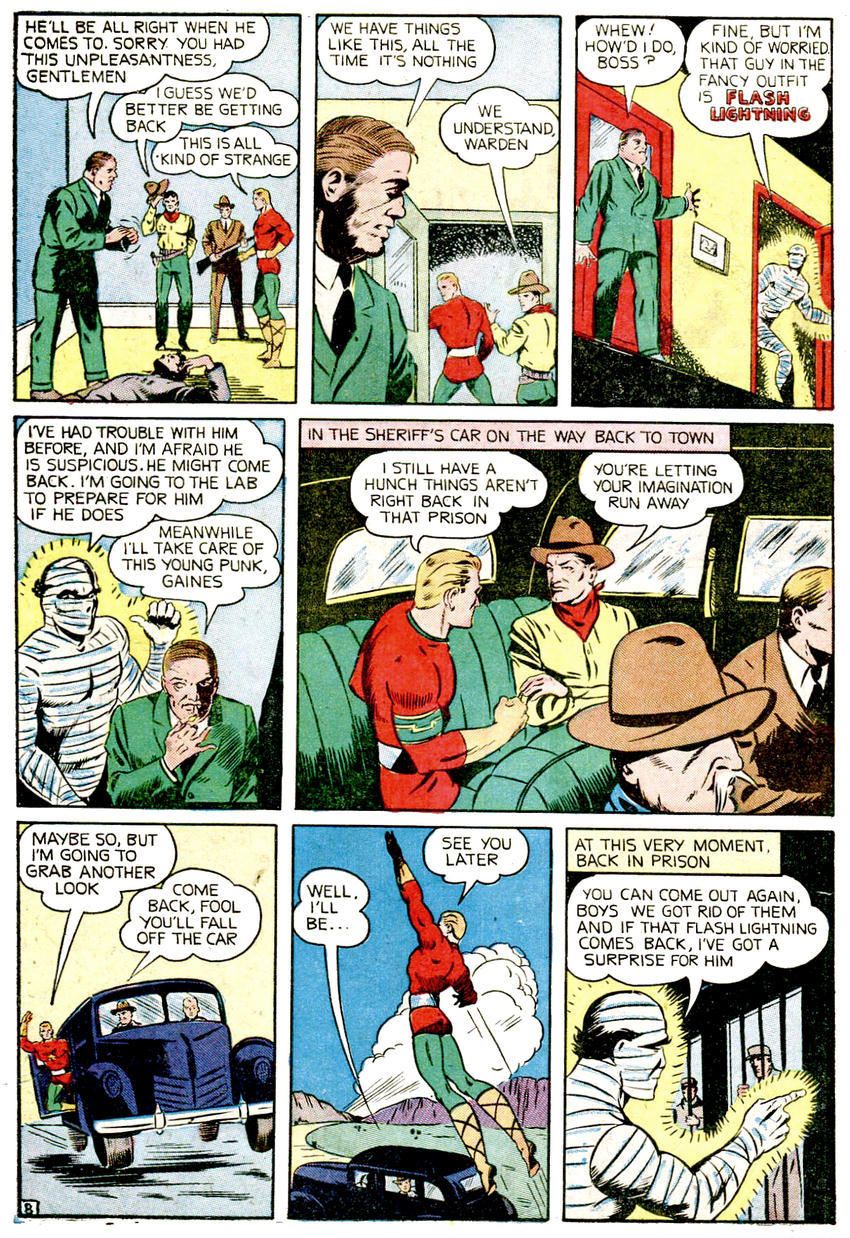 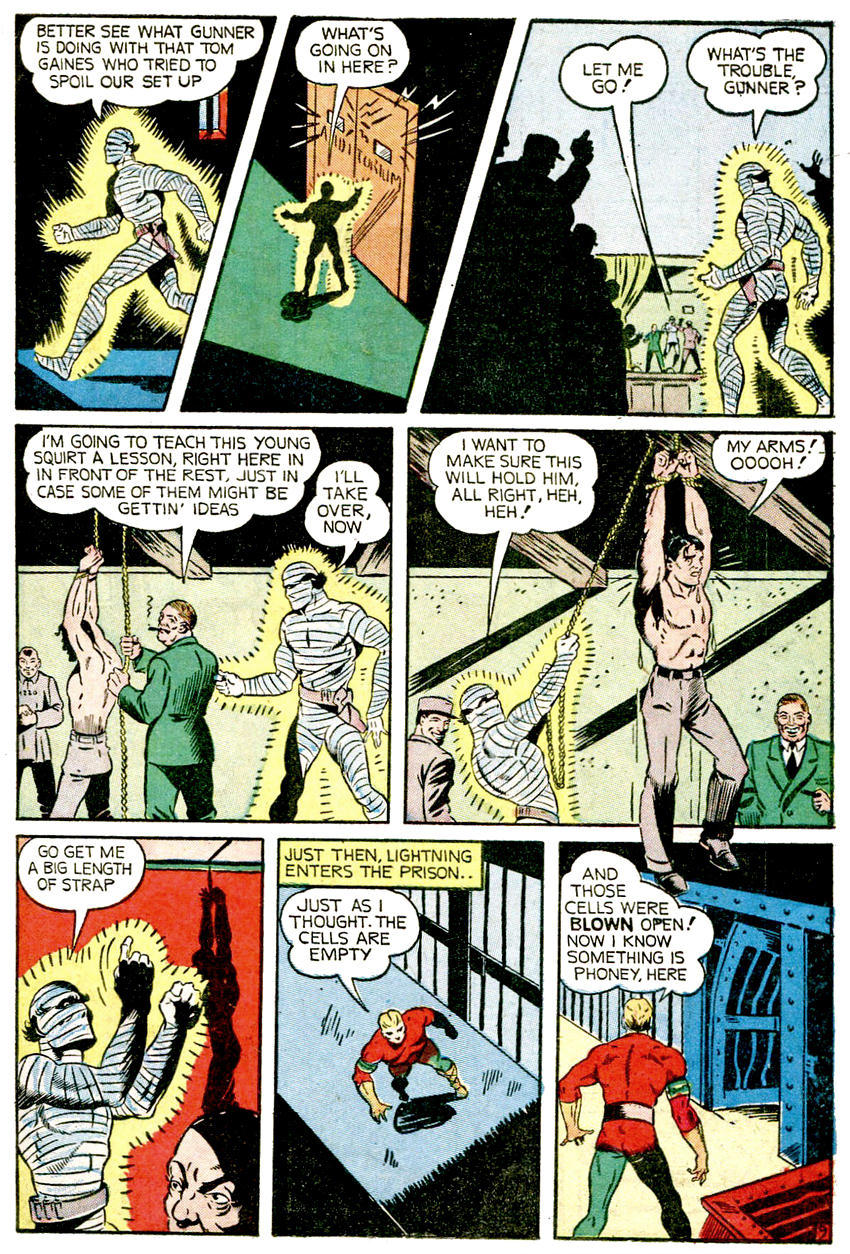 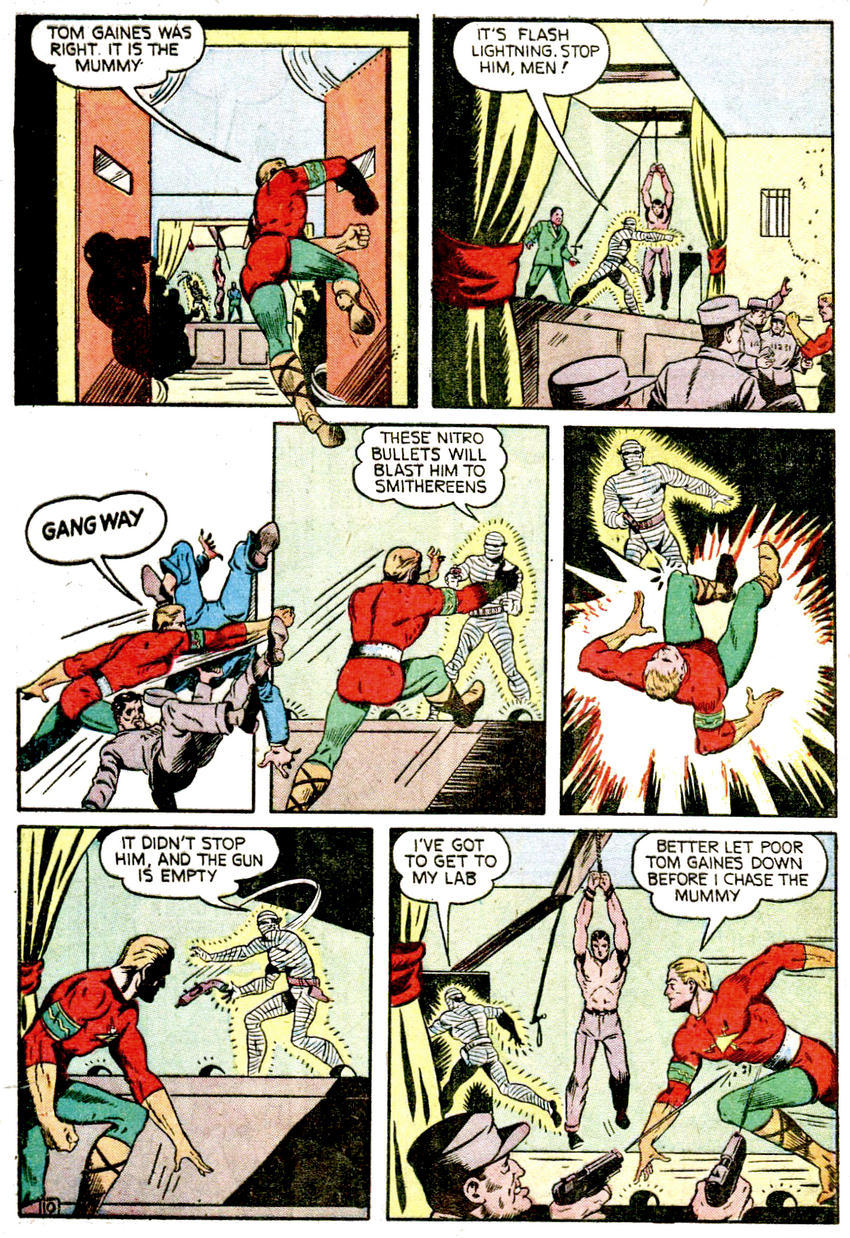 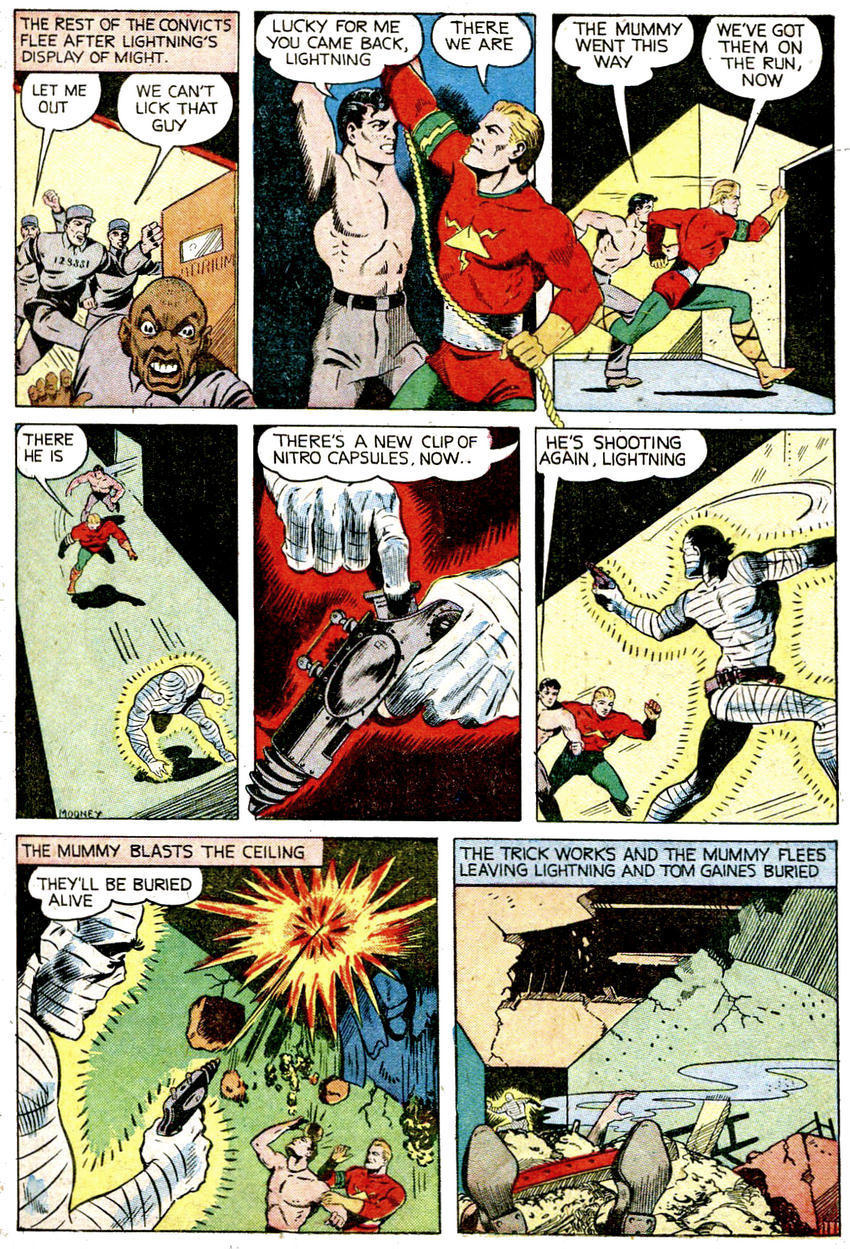 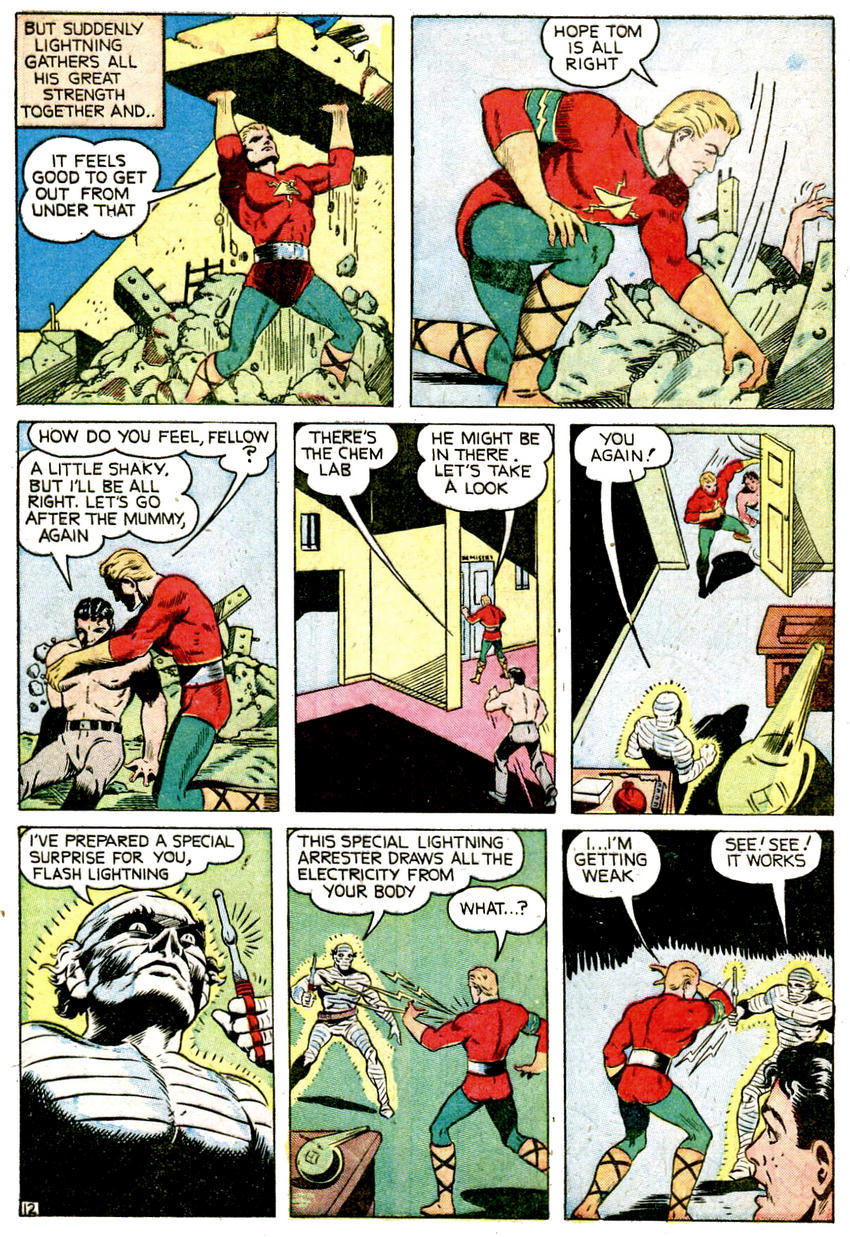 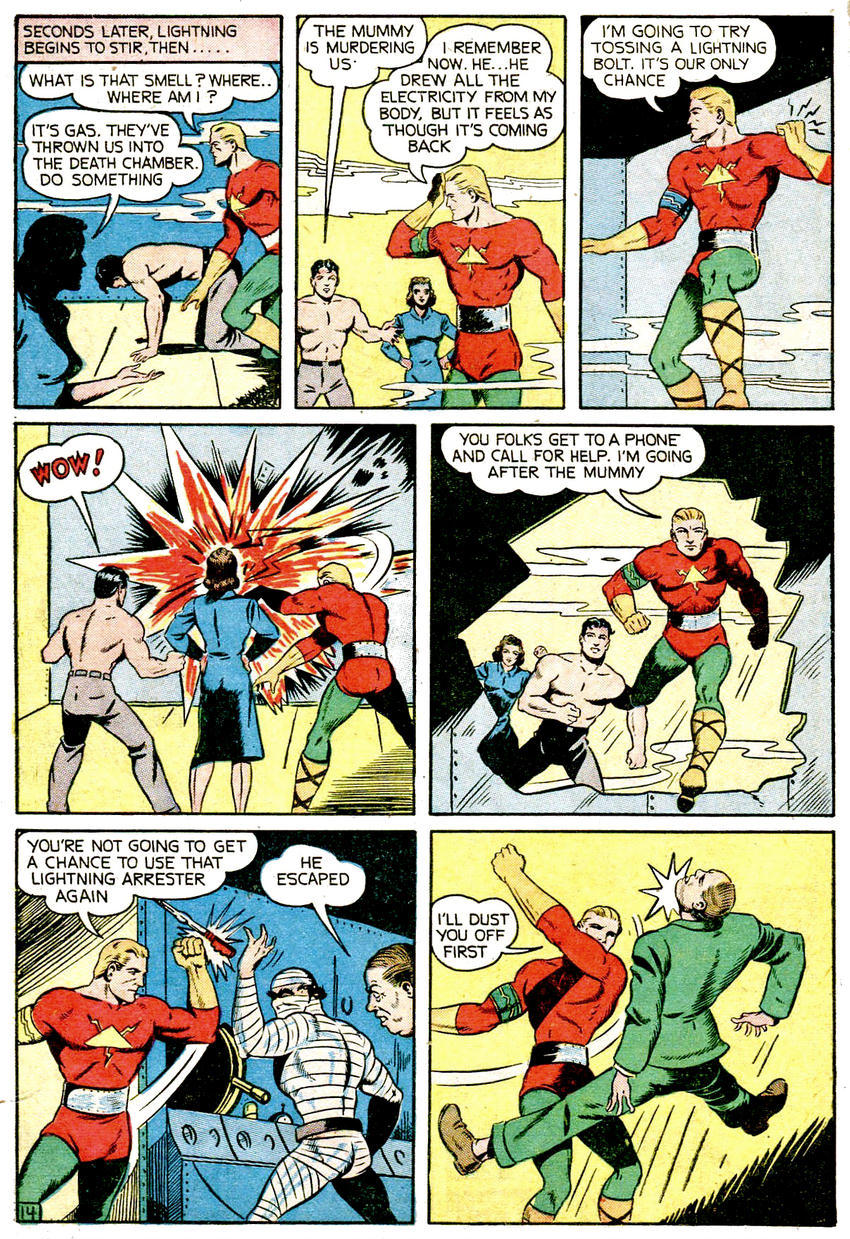 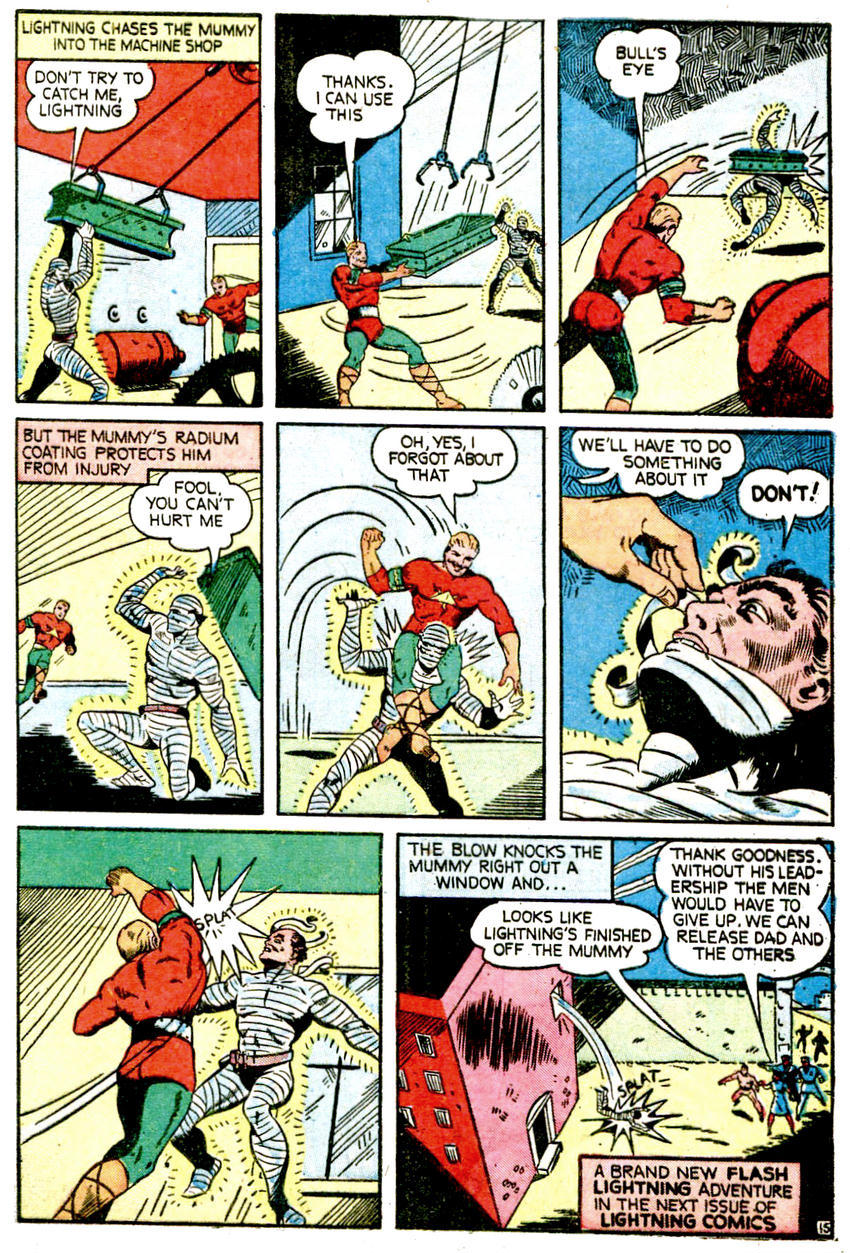 That's the problem with rehab. Go tell Brubaker.
"Toss her into solitary. Maybe we can use her later, too." That girl should be very worried.
Look at the way he's sitting while saying this. The guy is clearly a natural born criminal.
Can American comics foreshadow future Mr. Pappy? For one Gaines was framed ten years after for showing a black face.

J D, I assume you are referring to Bill Gaines' problem with the Comics Code when he reprinted his anti-segregation story, "Judgment Day," which showed the black face of an astronaut in the final panel. According to Gaines, he got his way, but after that aggravation he threw in the towel and ended his 10¢ comic book line with the final issue of Incredible Science-Fiction.

Beyond that depiction, which was brave at the time, most publishers avoided black characters unless they were caricatures for comedy, or an occasional black face in a crowd. Publishers, movie-makers, TV networks, did not want the push-back or boycotts from bigots that came with showing black characters, so they just avoided them.

I have no idea what the intention was of showing the black face in this story, but I chose to make note of it in my comments, just to give the readers a heads-up so they don't think I am ignoring what could be offensive to some.