Number 1740: Whizzing into the future 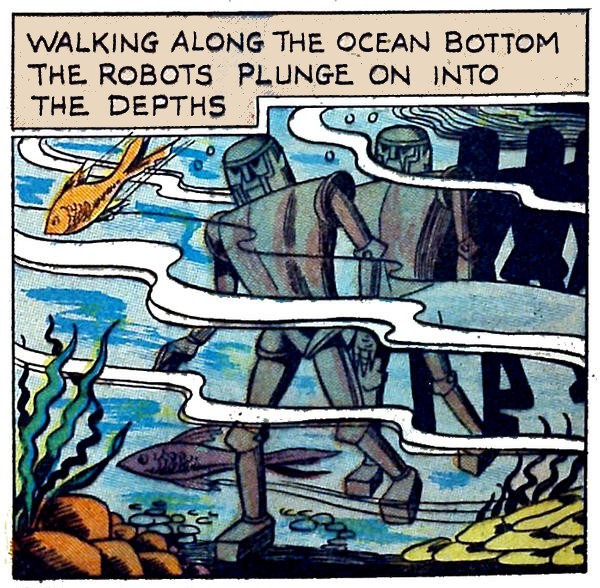 Whiz Wilson is able, via his Futuroscope, to travel in time. That is science fiction, but I often feel I’m visiting a place called the Future. Watching my fellow citizens with little devices in their hands, sending and receiving messages while ignoring the rest of the world makes me feel out of my own time. Welcome to the brave new world! Personal opinion, anyway...I have a cell phone, yet have never texted a message.

In Lightning Comics #5 (1941) Whiz visits Florida in the year 3000, and according to one man he confronts, it is a world where war and Great Depressions are a thousand years in the past. In the very next panel that perfect Florida is invaded by giant robots. Is Whiz’s timing lucky, so he can help repel “madman” Baron Krawman with his army of mechanical men, or is Whiz the cause? My theory is that by entering the future Whiz has altered it. The idyllic world is suddenly one in danger. Whiz should help out and end the menace. If my theory is correct, he indirectly caused it.

If I was a visitor in 2015 from, say, 1941, perhaps by being out of my own time my presence in an era in which I do not belong would change the future so the cell phone was not the center of so many peoples’ lives. I wouldn’t have to worry about walking or driving amongst so many distracted and self-absorbed people. 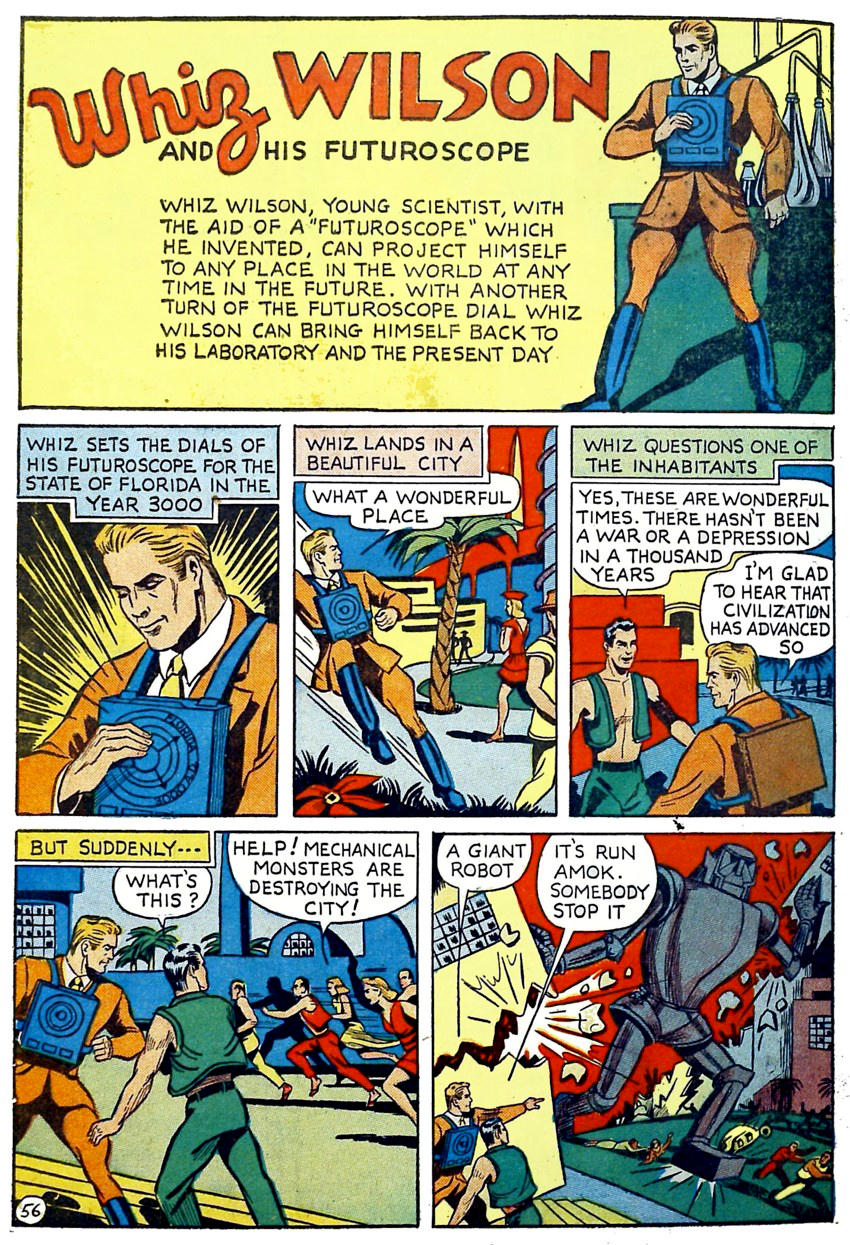 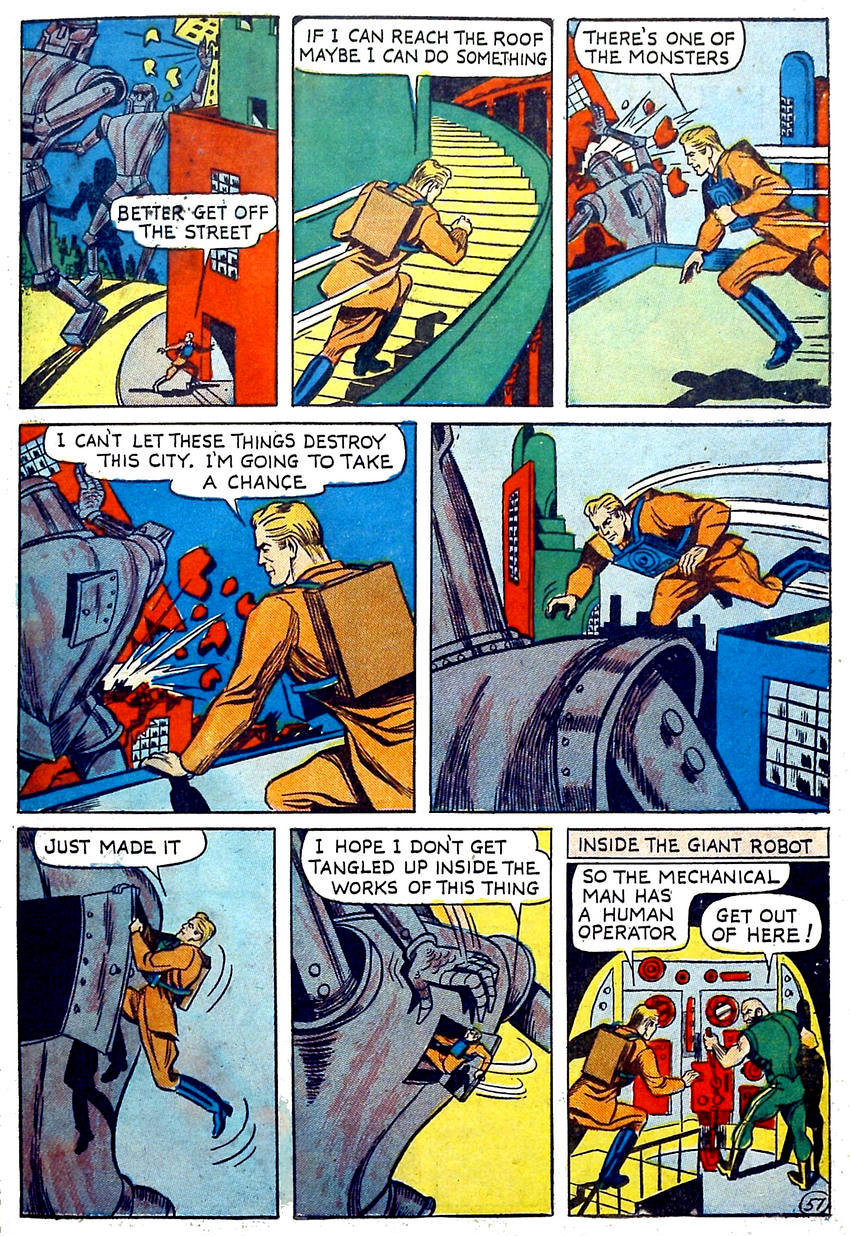 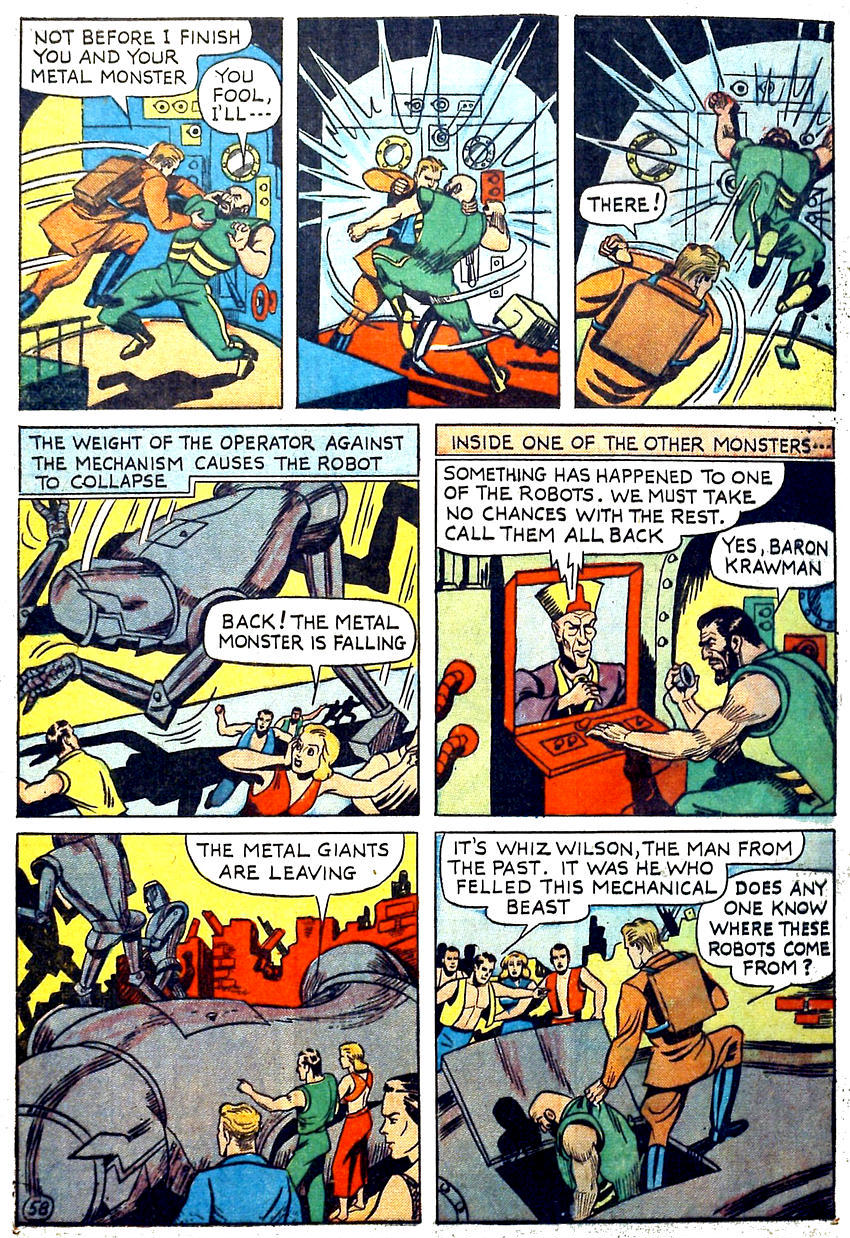 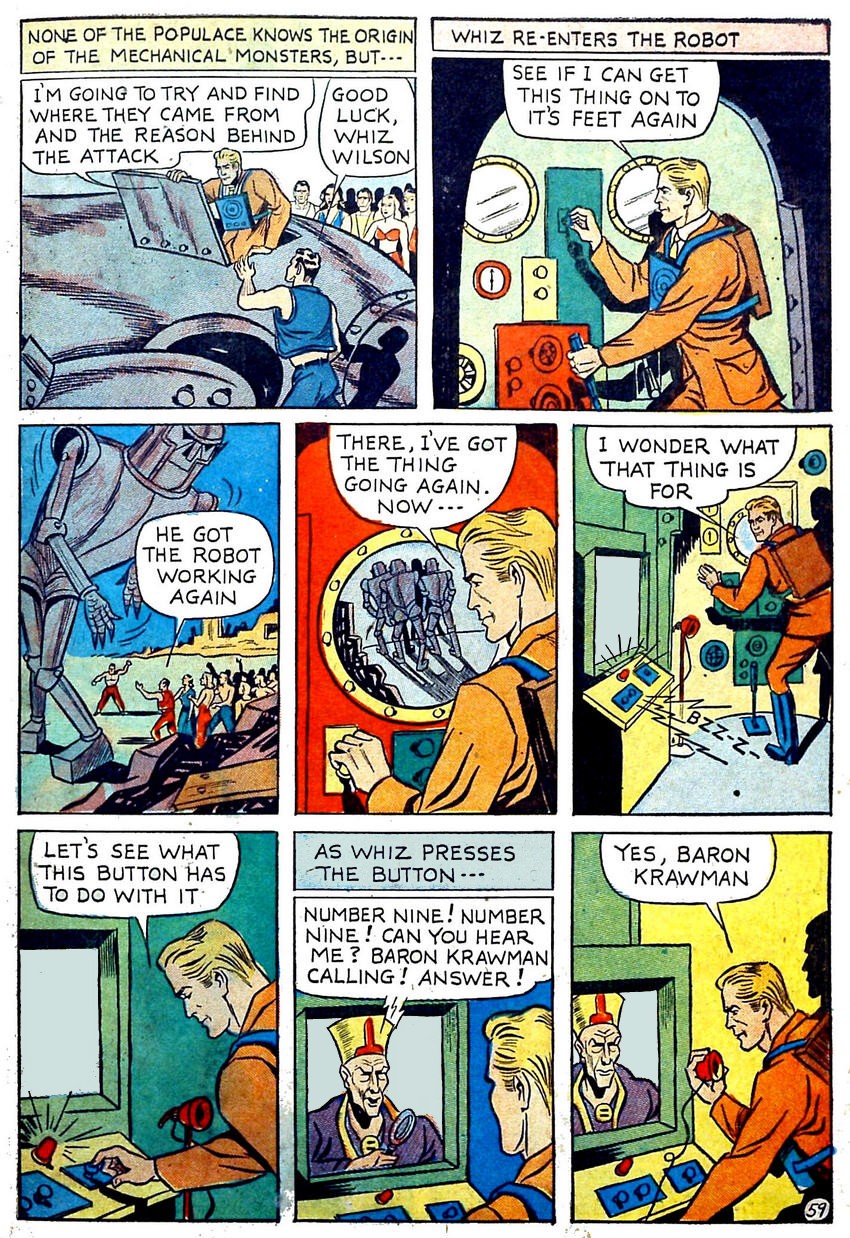 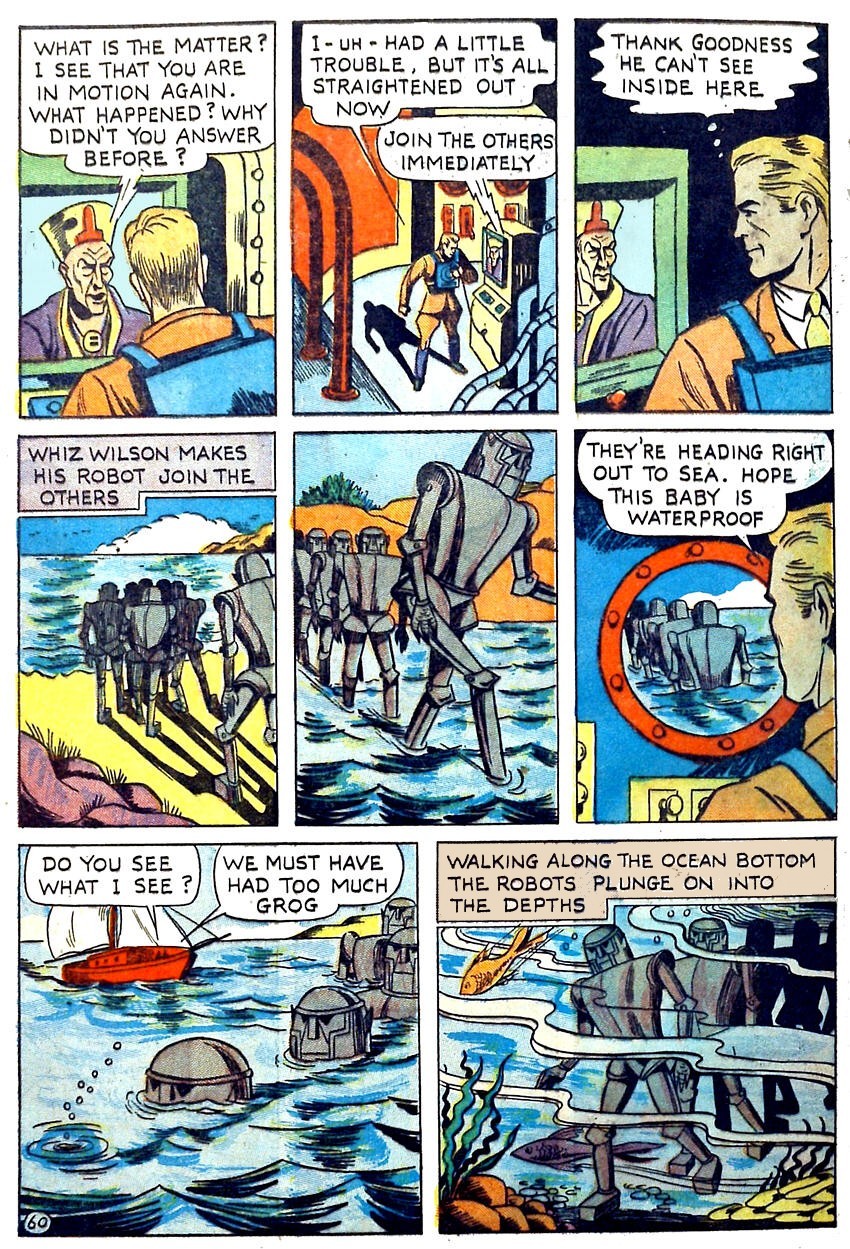 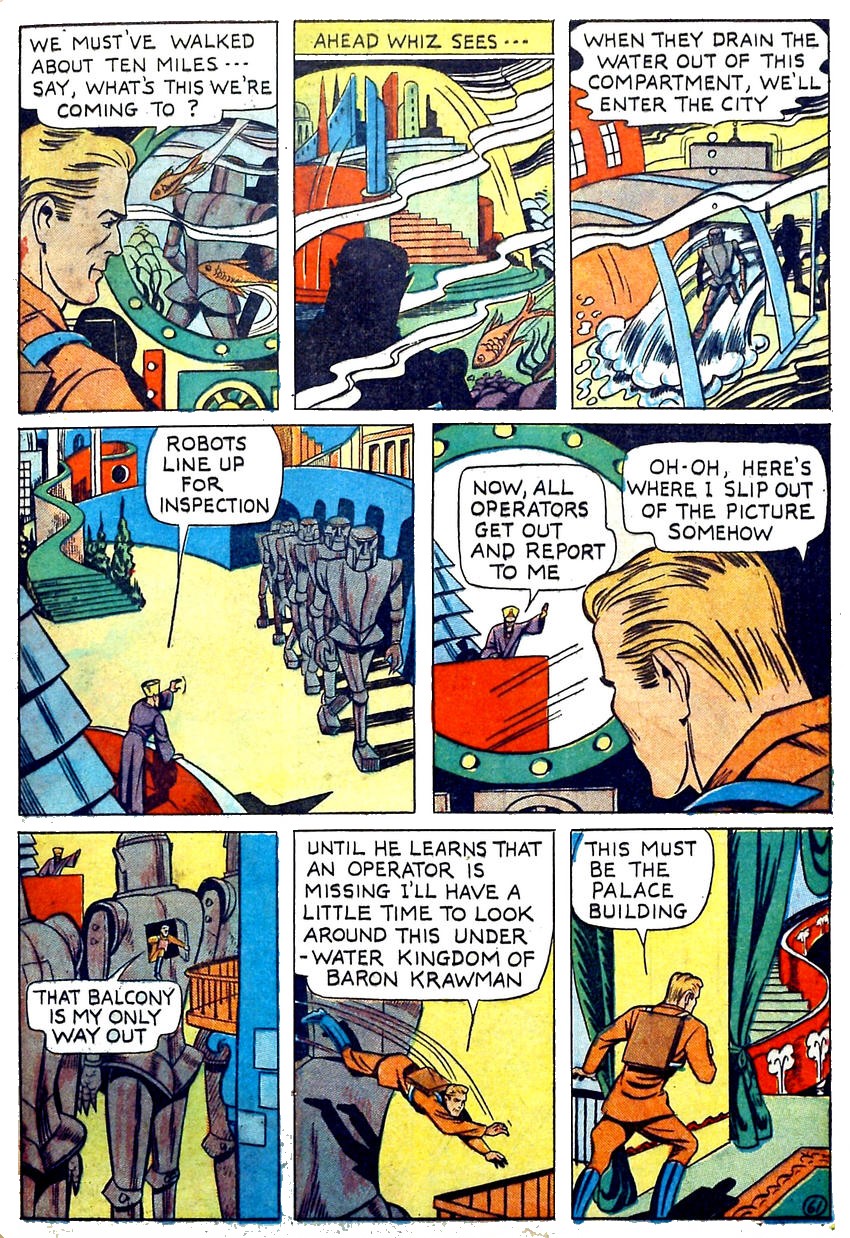 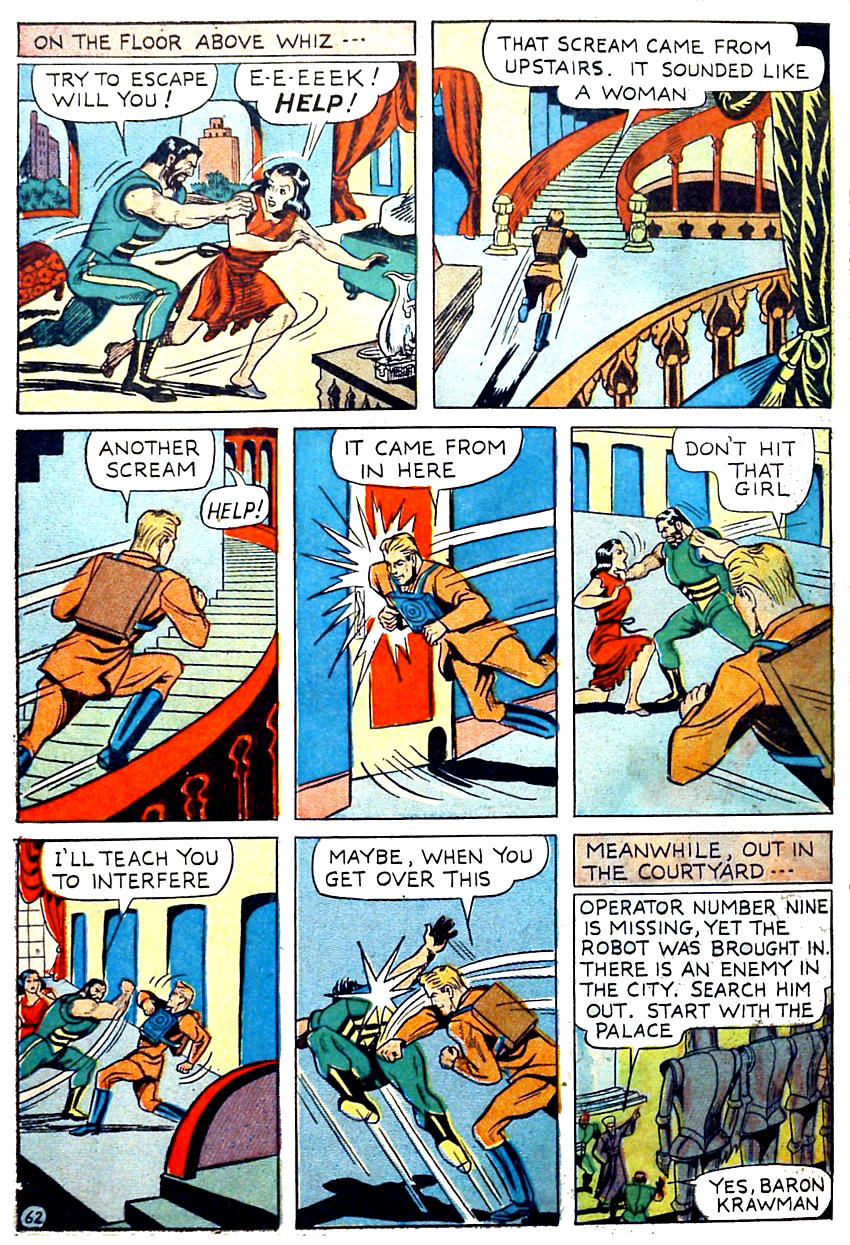 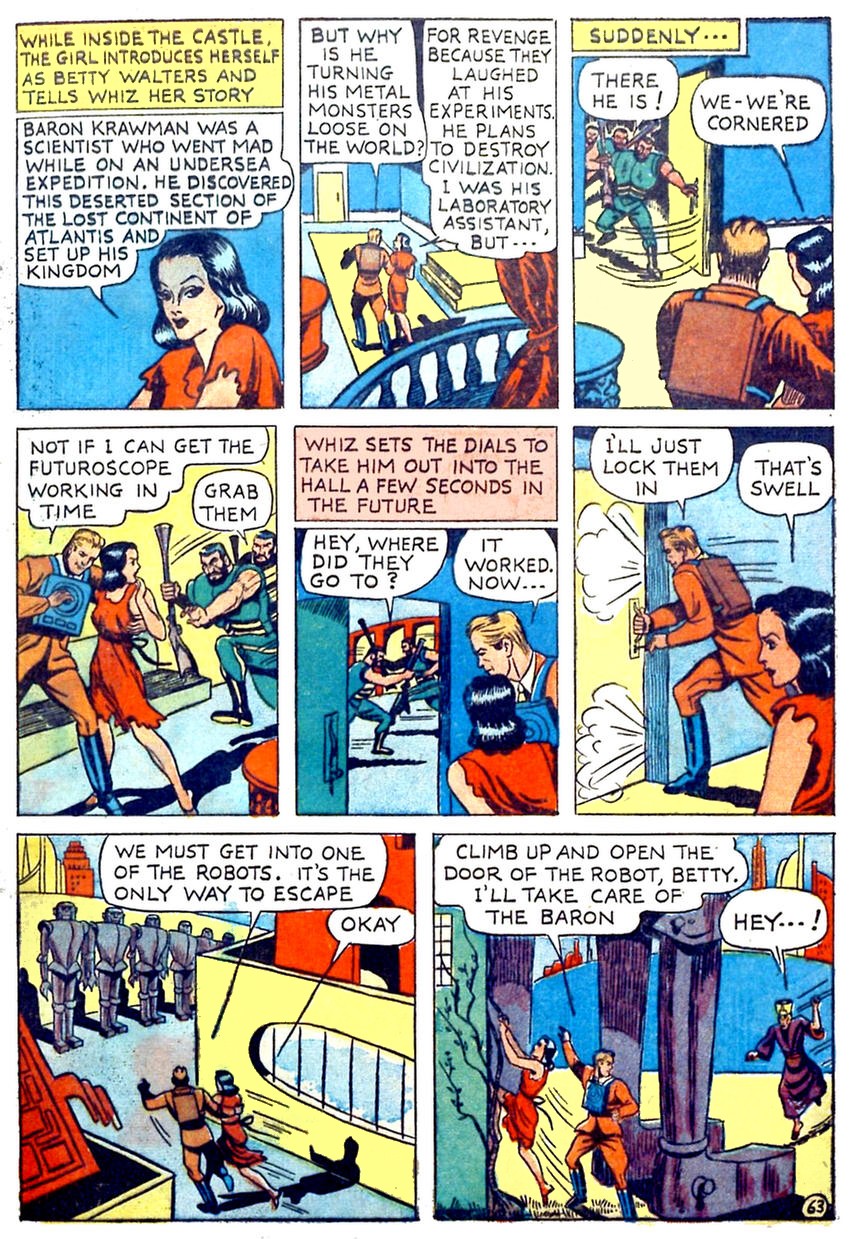 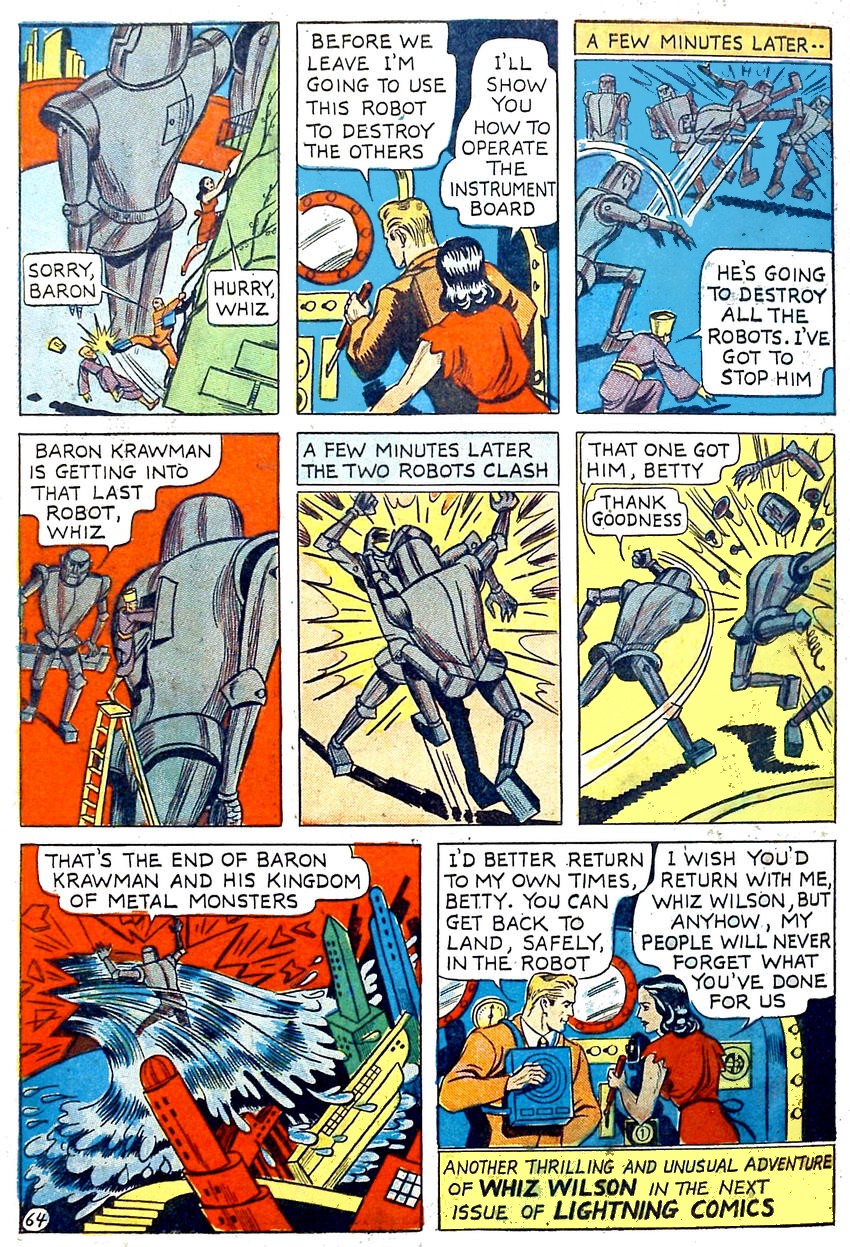 Lately, I can't help but finding similarities to some famous Uncle Scrooge stories in your posts. Was Barks a huge expert of Sci-Fi comics or am I just duck-addicted?

I think the real danger is messing with the past. If you go to the future and kill Baron Krawman I guess this was... meant to be. Sort of.
You didn't even consider the possibility of changing your own future. Don't tell me you're absolutely, completely satisfied with your life. Well, I hope so. As for me, if I could get back to, say, 1981, I'd give that boy-me a good beating and some useful tips.

Nice story, brings me back to its era (eh!). Those robots made me think of good old "Rock-em Sock-em" game.

I'm of the opinion that time travel of any kind would be impossible, but, if it were possible, we wouldn't be able to travel to the future, only the past. But if we could travel to the future, it wouldn't matter because it hasn't happened yet. Were we to do something major in the future and then travel back to our own time, we could totally change the future that we saw just by doing something else to affect it. See what I mean?

Anyway, I liked the art in this one. Who drew it?

J D, I have only a vague idea of what Carl Barks read. I know he read National Geographic Magazine, because he used photos from the esteemed publication as reference for some of the locales in his panels. I also know he was a fan of cowboy movies. He could have read pulp magazines, because I'm sure he was always looking for ideas.

I have resigned myself to the fact that I will never be able to go back in time and fix the mistakes in my life. Or buy extra copies of those early Marvel Comics when they came out, store them carefully in a bank safe-deposit box, and be selling them now and becoming rich in my retirement. Yes, I have many of those what-if scenarios in my head, but (sigh) that is all they are.

Ryan, have you seen the "time traveler" videos on YouTube, where they find an antique film or old photo that looks like someone is out of their time? There is one of a woman walking down a sidewalk in the 1920s who looks like she's talking on a cell phone. The fact that there were no cell phone towers at the time doesn't seem to bother the folks who believe that sort of thing.

I believe time travel is impossible in the science fiction sense of going on dinosaur hunts or stopping Kennedy's assassination.

Maybe if we could travel back to 1941 we could visit the office of Ace Publications and find out who drew the Whiz Wilson story.