Number 1455: Welcome back to Earth, Rex Dexter of Mars 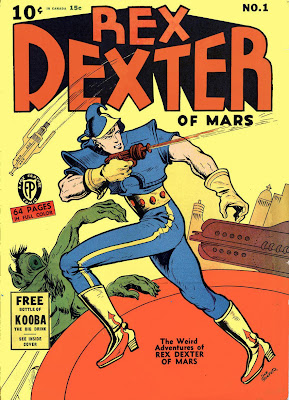 Although the cover says “No. 1,” Rex Dexter of Mars was a one-shot publication from Fox Features, dated Fall 1940. Except for the story I’m showing today, the magazine is made up of reprints from Fox’s Mystery Men and Wonderworld comics.

Rex and his girlfriend Cynde have been raised on Mars, where Rex's great-grandpappy took a group of people in 1939. In 2040 Rex and Cynde return to Earth to find a utopian world. According to an unnamed character, explaining how life on Earth has changed in 100 years, it is, “Oh, much better, I’d say! To-day we are a united world, all working for the common good!” In the world of 2040 no one works because they have to, just because they want to. There is no need for money. Hey, want a ride on the city bus to the job where you aren’t being paid? It’s free. 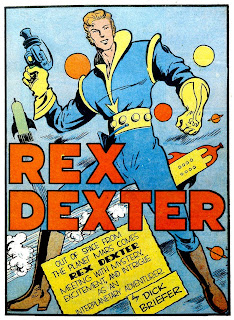 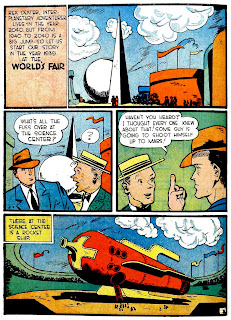 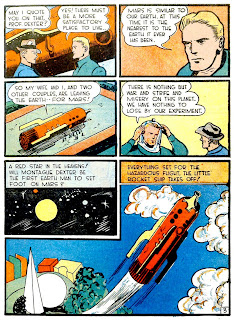 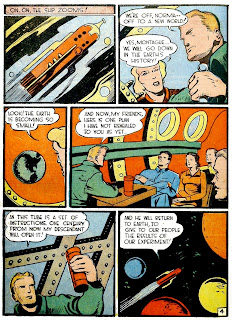 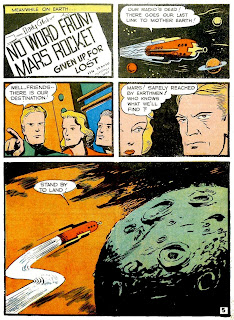 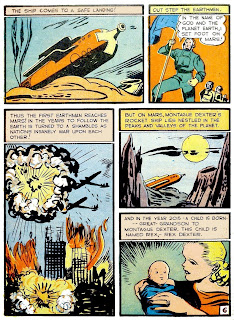 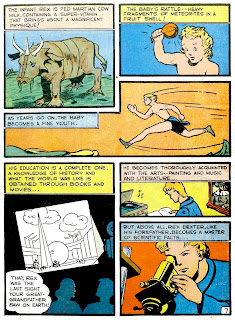 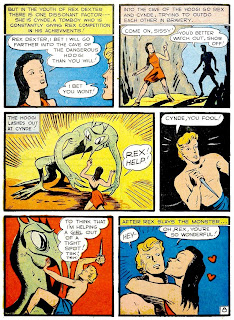 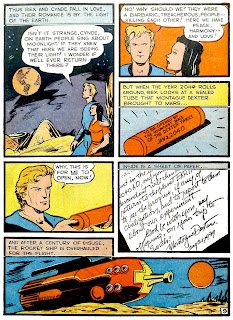 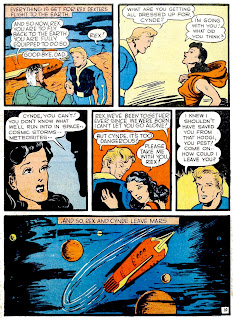 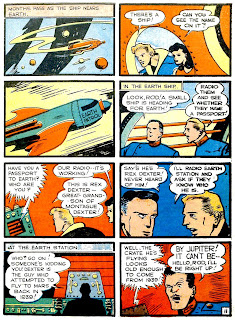 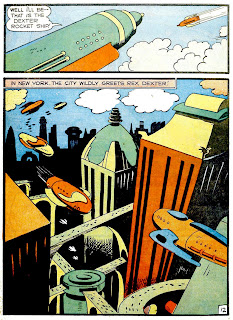 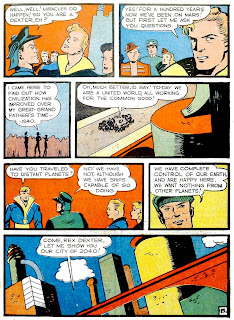 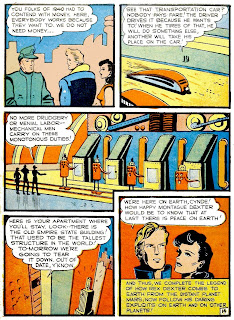 ***********
Here’s another of Rex’s adventures from Mystery Men Comics. Just click on the picture. 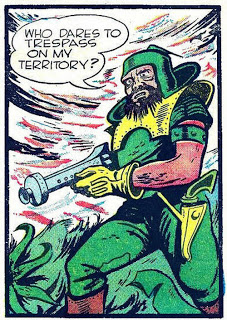 Hmmm… What if the youngest male descenndant of the Dexter family had been an infant on 2 January 2040? (I'll give them the benefit of the doubt, and presume that they did not use a calendar derived from the Julian for ordinary purposes.)

You've previously noted that Briefer was once involved with the Communist Party, and we've wondered whether and how his politics might have been injected into his stories. Well, whoomp, here it is. The Earth as he depicts it in 2040 very much fits the long-term predictions and objectives of Marxism and of the Communist Party. People work for the common good, rather than for personal material gain, and can adopt whatever sort of task interests them; goods and services are freely available. (Somehow, never actually explained — here or in Marx — stuff is made and consumed in the right amounts for a high-level civilization. Everything is coördinated … somehow.) Manual labor has been rendered obsolete (something promised by the Communist Party, though I don't recall that promise being made by Marx).

You're right, Daniel, I went with your link and re-read what I wrote in April of this year. At that time I had not discerned Briefer's politics infiltrating his strips, but then the strips I was most familiar with (funny Frankenstein, etc.) were done later in the forties. The Rex Dexter origin strip in this posting was done much earlier, and has a simplistic view of a communist utopia. I didn't use the word communist in the post, but I was thinking of it when I wrote it, as self-serving as that sounds.

Since you are also a student of history you know that during the Great Depression there was sort of a hipness to being a communist, fighting the fascists in Spain, and a misplaced idolatry of Stalin and the USSR. At some point later many true believers rejected the party line, and some were called to account by HUAC for once having been members of the party. I have no idea where Briefer fell in this, and hope to someday either hear from his family members or someone who knew him to tell me what he believed later in his life.