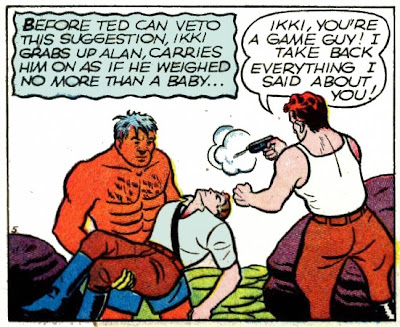 Sucker that I am for time travel tales, here is a four-chapter sequence from 1939. “Adventure In the Unknown” was a series appearing in All-American Comics, and these chapters appeared in issue numbers 9 through 12.

This story sequence from All American, illustrated, according to the GCD, by Stan Aschmeier, is one of those cavemen and dinosaurs tales of “one million years ago.” The cavemen wear shaggy blue shorts, and there are no cavewomen, who are presumably back in the caves keeping the home fires burning. Our heroes, Ted and Alan, befriend a caveman named Ikki, who becomes their helper. In the last chapter, in a burst of feelgood emotions for their new pal, Alan says, “I've a great idea, Ted!...Let’s take Ikki back to 1939 with us!” To which Ted replies, “Sure — we’ll donate him to a zoo — or a sideshow!” All heart, that Ted. 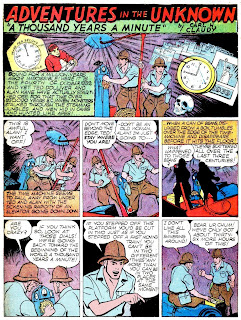 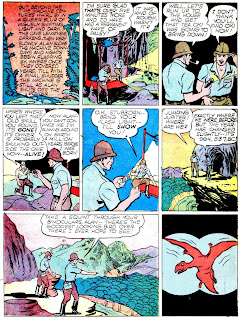 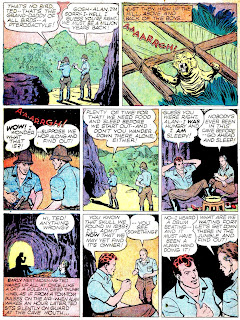 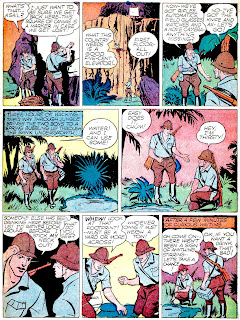 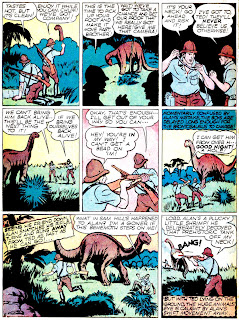 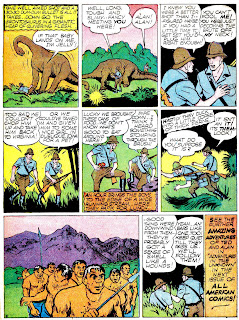 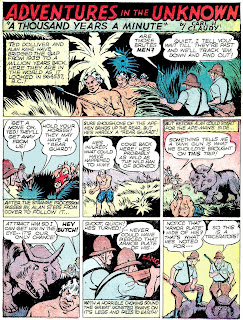 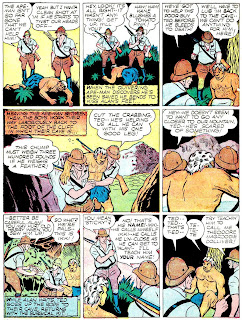 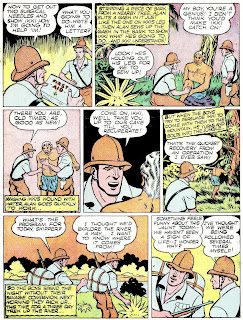 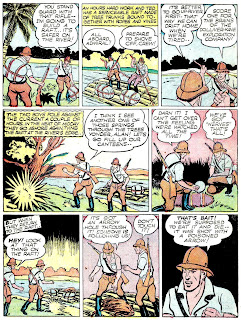 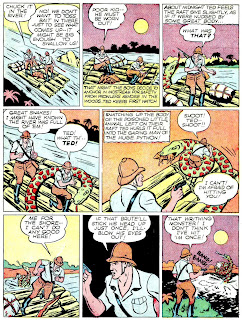 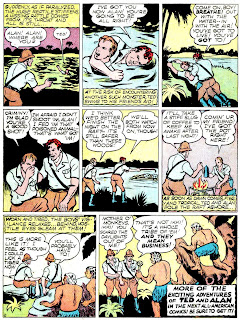 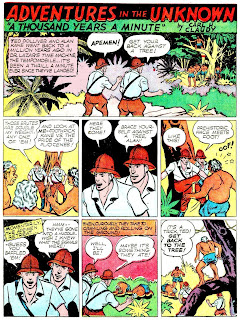 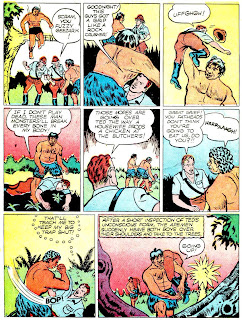 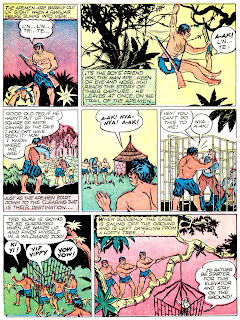 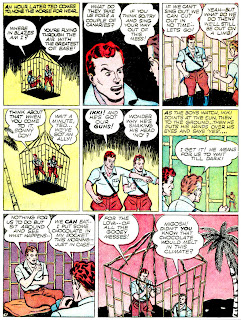 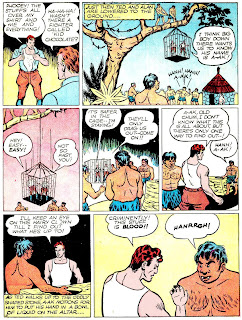 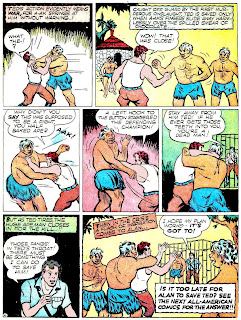 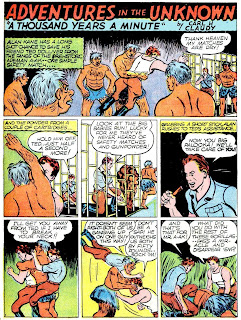 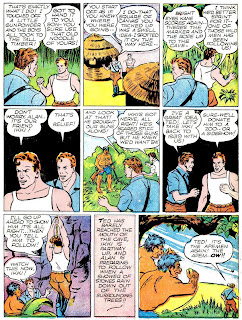 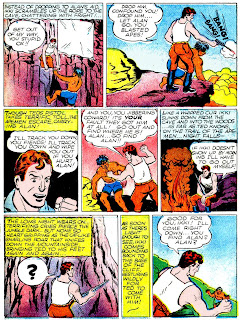 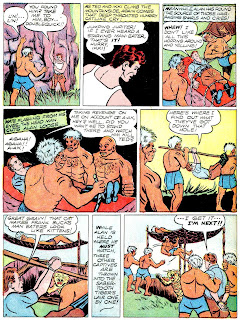 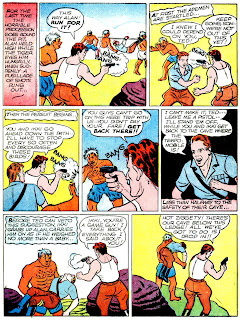 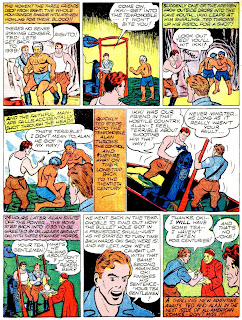 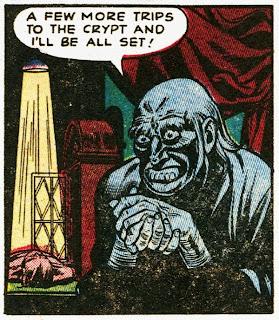 Jack Cole, one of the greatest cartoonists to ever work in comic books, did several horror stories during the horror boom of the '50s. (After a short time he was out of comic books altogether, and drawing sexy women for Hugh Hefner.) The horror stores are unsigned, and some of them have the heavy hand of inkers other than Cole, but they are immediately identifiable as being by the creator of Plastic Man. 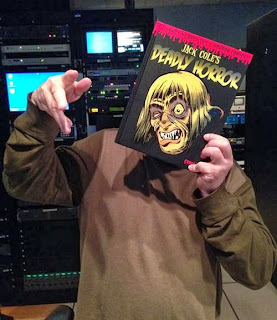 Jack Cole's Deadly Horror editor Craig Yoe (attempting to hypnotize us into buying the book in the picture above) prints a statement by me where I say that Cole never got far from his bigfoot cartooning origins. Even though the horror comics would seem to be far from Cole’s “Burp the Twerp” comedy one-pagers, the same level of craftsmanship and even, yes, FUN — albeit grisly — have gone into each page and panel. 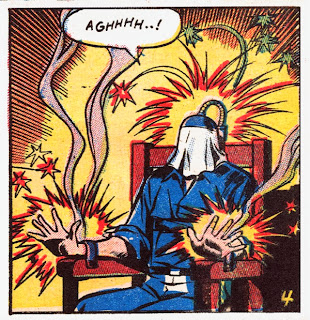 The book, being number four in Yoe's ongoing series of horror comics reprints, fits right in with its predecessors, and as you can see from this look at one of my Pappy Studio bookshelves, looks mighty handsome when stacked with those volumes. (As well as the other books I keep in a rotation depending on what I’m researching at the moment. The other crap stuff on the shelf is eye-candy I can't seem to put in boxes and store away in my basement.}

The Cole book is highly recommended, just as I’ve recommended other Yoe books before. It’s because Craig Yoe has a fine sense of design, history, and the importance of a good horror story right before Halloween to, you know, set the mood for a chilly autumn evening when the wind is whistling down your chimney like the howls of souls in torment...tree limbs like skeletal fingers are tap-tap-tapping on your windows...and you feel that delicious terror that comes from looking up from a horror story startled, thinking, “Did I just hear heavy footsteps coming up the stairs toward me?” 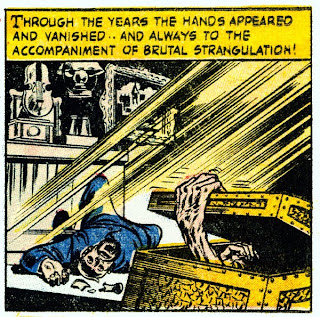 Bargain priced at a suggested retail or $24.99, it’s inexpensive enough for you to get a copy for yourself, and one for the horror comics loving friend on your Christmas gift list.

Jeez, even the attacking "ape-man" is mortified by the brutal slaying of poor Ikki. Reflect upon one's gun-nuttery? Oh, hell no: a couple of panels later the sickos are giggling about how things turned out. Let that be a lesson, kids: Never, ever help the white devils. They'll just shoot you in the back of the head.

For something more than 40 years, various authors have used a purported bullet hole in an ancient skull found in 1921 in Kawbe, Zambia, as supposed evidence for ancient Atlanteans, for Dänikenesque visitation, against evolutionary theory, and what-have-you.

Daniel, I'm always amazed at how some people can make such fanciful extrapolations from simple things. What looks like a bullet-hole in some prehistoric skull is obviously something else. There are many things that could look like a bullet-hole, especially when studying a fossil after a hundred thousand years of it lying in the ground somewhere. To say it "proves" Atlantis or ancient aliens is just silliness, and more daydreaming from people who have nothing better to do than force connections between things that are not connected.