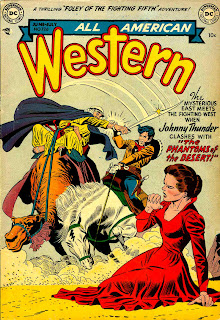 
I'd walk a camel for a mile

The last we see of Western action hero Johnny Thunder he and his girl are watching their horses return to them in the desert. They had just had an adventure with some Arab raiders on camels who tried to kill them. It's probably a story not likely to decrease tensions between our cultures. But camels in the Southwest, imported as pack animals, were a reality. The experiment of using them in the deserts of the United States territories just didn't work and by the Civil War the experiment was essentially over. As Western historian Will Bagley writes:

It wasn't that the camels couldn't adapt to the West; the West couldn't adapt to camels. They were not friendly animals, even to fellow camels, and they held grudges. Despite their bad temper and ability to spit the contents of their stomachs with the accuracy of a Kentucky marksman, it was camel stench that helped do them in. Odor usually was not an issue for Western muleskinners, but the slightest whiff of camel stench played havoc with a mule train. Sometime in 1865, camels stampeded a pack train bound for Missoula and turned the whiskey-bound town's Fourth of July celebration into Montana mud. It was not long before camels were banished from northern mining camps.

Their vast advantage as pack animals notwithstanding, it was America's affection for horses that doomed Western camel caravans. Camels and their legends long survived among the boomtowns and ranches of Arizona, Nevada, Colorado and Utah. A grizzled sideshow camel with a U.S. brand turned up in San Antonio in 1903. Arizona declared camels extinct in 1913, but hunters reported seeing them in the desert around Yuma into the 1950s.

As interesting as the history is, and it probably influenced this Johnny Thunder episode, it wasn't noted by the writer or editor Julius Schwartz, who loved to drop these types of facts into stories in the form of footnotes.

"Phantoms of the Desert" is written by Robert Kanigher, drawn by Carmine Infantino and Seymour Barry, from All American Western #126, 1952. 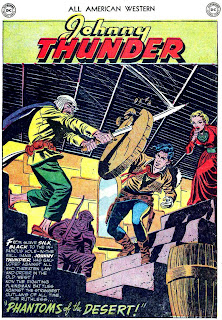 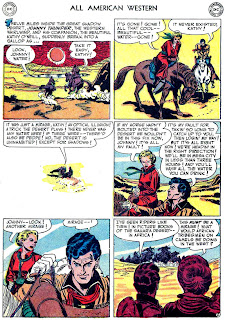 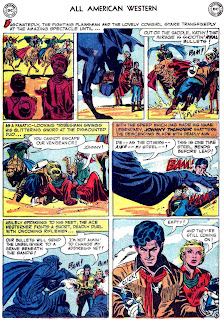 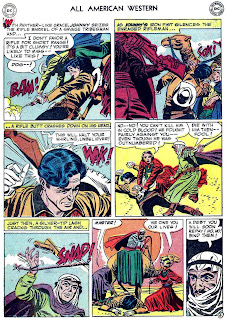 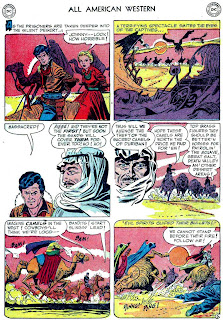 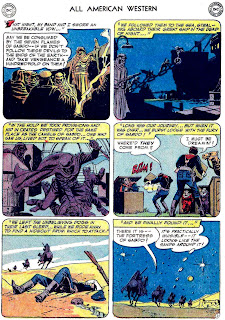 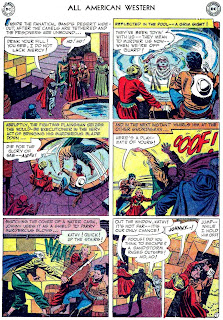 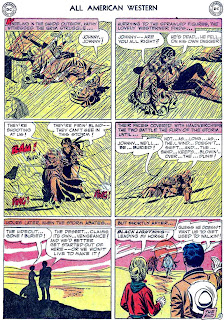 I'd heard the problem with camels was the fact that the deserts they were from are different from the American deserts in that, ours tend to be rockier terrain as opposed to sand and that their hooves were soft and ill-suited for the difference. Either way, it was a failure.

Beautiful artwork here, and on a fun story too!