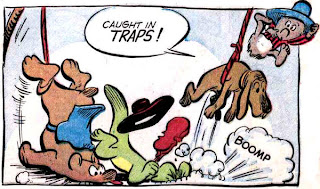 
I was going to make mention of this in my last Walt Kelly posting in Pappy's #650 but forgot. It's been just over 36 years since Walt Kelly died in October 1973, way too young at age 60. (Even if 60 seems old to you youngsters it doesn't seem so old to those of us who have passed that mark.) Kelly was one of the true comic geniuses of the twentieth century.

Pogo was not Kelly's first contribution to comic art, but certainly his greatest and most successful. This story, with all of the silliness and fun intact, is from Dell Comics' Pogo Possum* #1, 1949.

*Actually titled Pogo The Possum in the indicia. 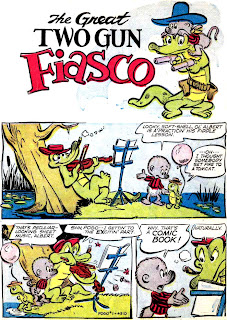 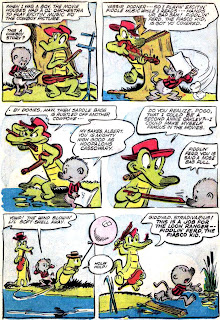 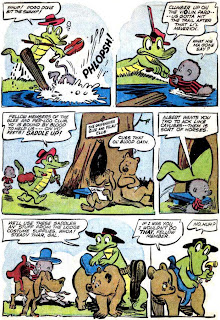 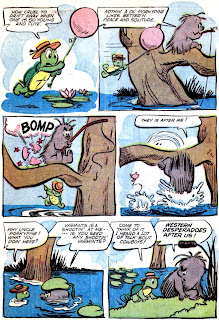 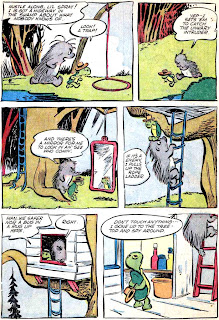 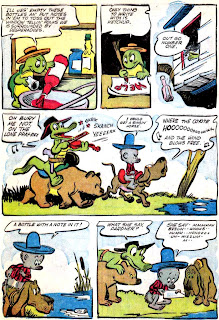 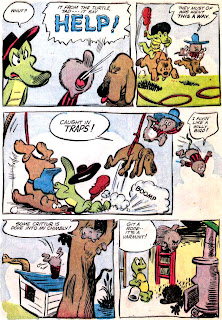 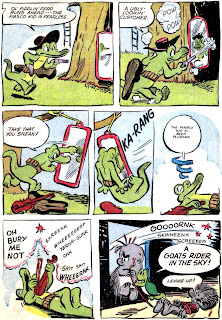 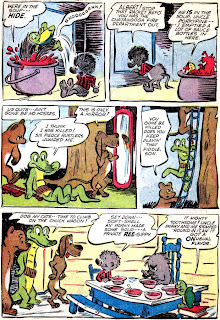 Pappy: Thanks for posting this. As you say, comic genius. "I would get a singing horse," says pogo, riding a howling hound dog. Why is that so damn funny? To tell it, it is sort of funny. To see it, though, really gets the funny bone. Man, I love Kelly. I also prefer the comic to the newspaper strip (not that I didn't love the strip as well, though).

Great post. Can't get enough Kelly. I wonder, was he poking fun at comics in the opening sequence ? Also, what is the origin of 'Ghost Rider in the Sky' ? Does it come from Pulps ?

Can't thank you enough for this! Funniest thing I've read in a long time. Walt Kelly was the best!

Am also a big Kelly fan. Thanks for posting this.

I find myself wondering this evening what it would be like to read this, and other online comic book stories, on Apple's new iPad.

Lysdexicuss, I think the origin of "Ghost Riders In the Sky" is the song itself. It was written in 1948 by Stan Jones.

"Jones said that he had been told the story when he was 12 years old by an old cowboy friend."

I echo everyone's else love of Walt Kelly. This is a great little story. Also I loved Albert playing music from a comic book at the beginning. Was this the first instance of a "graphic score"?

I forget sometimes that I have readers who might never have heard of "Ghost Riders In The Sky," but not only was it a #1 record of the late '40s, it was the inspiration for the Western character, Ghost Rider, written by Gardner Fox and drawn by Dick Ayers for ME Comics.

Here's a YouTube video of Vaughn Monroe's version of the song. I had it on a 78 when I was a kid.

IMHO Kelly is the best rounded cartoonist whatever there was! His writiing was whimsical yet dense yet easy to read! His drawing style was easy on eyes appealing, yet so solid and weighted!

A master who can never be read too much!