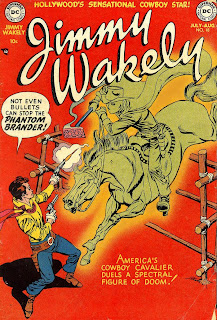 
I wonder how the folks at Magazine Enterprises felt in 1952 if or when they noticed the cover of DC's Jimmy Wakely #18, and saw what looked like their character, the Ghost Rider, under another name. Vincent Sullivan was the publisher at ME; in the earliest days of comic books he had worked for DC Comics. I can imagine a phone call to Jack Leibowitz, DC publisher: "Uh, Jack, Vin here...yeah, Vinnie Sullivan. Say, Jack...I wonder if you know you folks have stolen my character?"

The Phantom Brander was a one-out villain, one story and he was gone, but very close to artist Dick Ayers' depiction of the Ghost Rider. 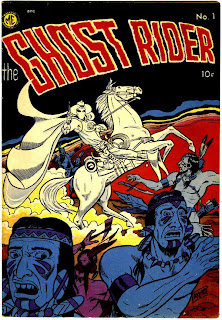 In 1952 there were hundreds of comic book titles. Maybe folks at DC who worked on Jimmy Wakely comics hadn't heard of the Ghost Rider, or had even seen it. But Gardner Fox would know. Fox worked for both DC and ME, where he wrote most of the Ghost Rider stories.

Jimmy Wakely was a singing cowboy who was in movies toward the end of the singing cowboy era in the late 1940s. This story is from the last issue of his comic, artwork attributed by the Grand Comics Database to Gil Kane and Bob Lander. 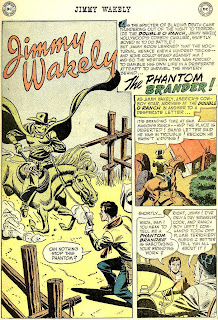 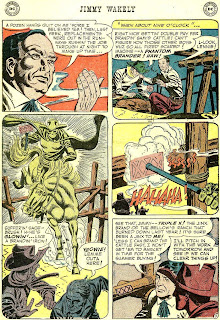 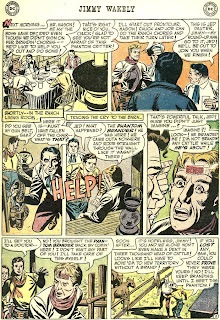 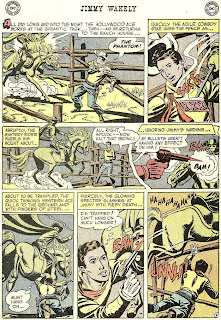 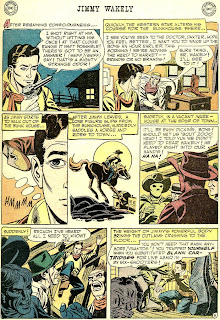 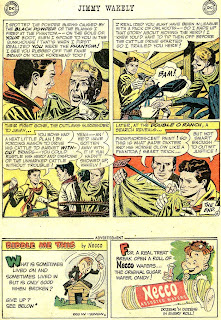 Wow! they do look similar. I mean, the mask and cape and all. Of course, the Phantom Brander does have a different schtick, with the branding iron.

I wonder if the writer had any influence on how the 'Phantom Brander' looked, or if Kane just wanted to draw his own version of Ghost Rider! I think the latter...

I was really disappointed that the brand to the face was a fake...

Hey, the bit about opening the images with a separate viewer is gone. Great.

It seems to me like you could tell a fake brand pretty easily. But maybe to match the Hollywood cowboy they had a Hollywood makeup artist rustler.

Mysteries without solutions. I've run into enough strange things in comics that I've given up on ever finding the real answers...just good guesses.