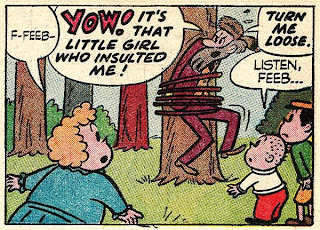 
Tubby is a drag


Gran'pa Feeb was a character introduced in Tubby's Clubhouse Pals #1, a Dell Giant Comic from 1956. I wrote an article about him in Pappy's #161.

Feeb is a pretty hilarious character, an oldster going through a second childhood. I laughed out loud when I reread this story, especially the sequence at the top of page two: Feeb says to Willy, "Lucky for you you're wearing glasses! I never fight boys who wear glasses!" Willy responds, "I'm not wearing glasses, Feeb." in the next panel Feeb says, "Lucky for you you've got big glassy eyes!"

Another gag is Tubby dressing in drag to make Feeb hate girls, to help him pass the admissions test for their boys' only club. Tubby is a kid who wants to fit in with his peers so he pretends to hate girls, but he doesn't hate girls. He loves them! Tubby is used to disguises, which he uses when he's his alter ego, The Spider, solving mysteries for Lulu. In this case he's able to fool Feeb, something he never did with Lulu's dad.

The entire Dell Giant is written by John Stanley and illustrated by Irving Tripp. 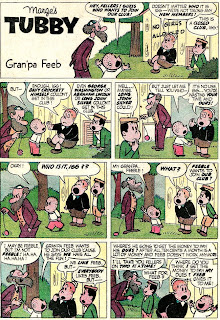 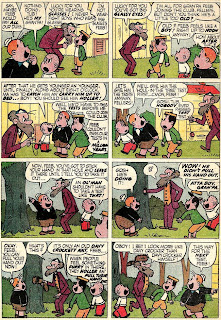 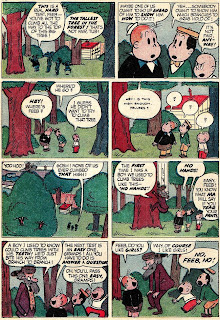 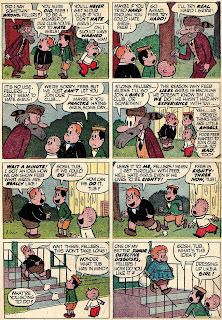 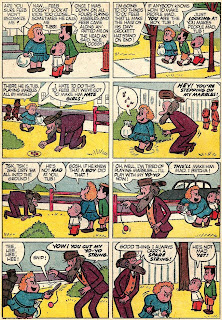 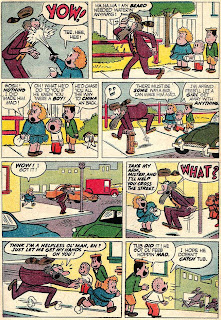 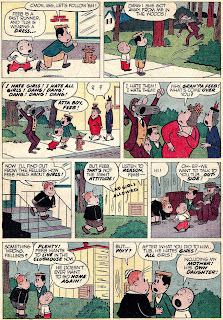 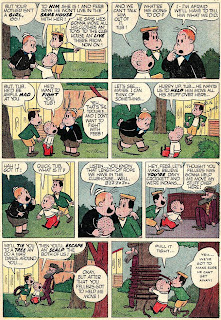 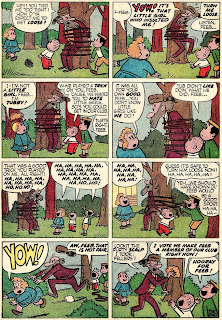 Thanks for this one, Pappy! LMAO

This entire book was drawn by Lloyd White, whose cruder, more vigorous artwork was ideally suited for the irreverent, often un-PC tone of this unique giant funnybook!