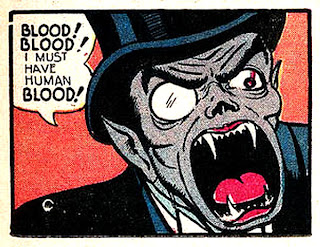 A year ago today I showed you this MLJ Witch's Tale story. Pappy's friend, 1506NixNix, who provided the scans for that, has provided the scans for yet another MLJ treat. This time it's starring Mr. Justice from Blue Ribbon Comics #11. We see a dance called the vampire waltz, and we also find out that vampires can turn into werewolves. Has anyone else ever suggested such a thing?

The name Carlos Hubbello is an inside joke. Carl Hubbell was an artist who worked in comics for many years. According to the book, The Ten-Cent Plague by David Hajdu, Hubbell's wife, Virginia, actually ghost-wrote many of the stories signed by Charles Biro.

OK, so that's off the subject. Sam Cooper and Joe Blair did the creative honors on this story, which runs the gamut from super heroes to horror, and is a good example of why for a couple of years at least, MLJ, in its pre-Archie incarnation, was one of the most garish and lively of the comic book companies springing up in the late '30s period. 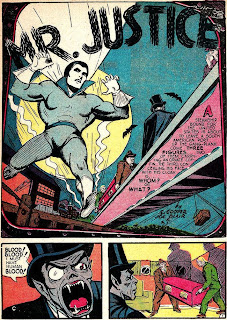 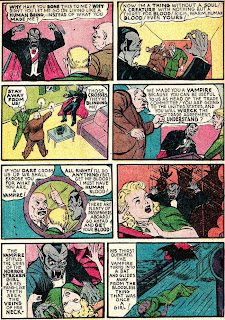 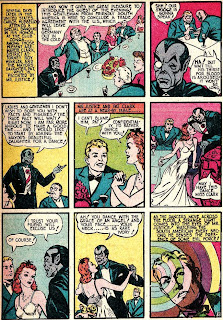 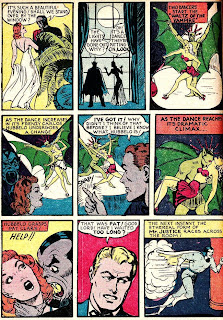 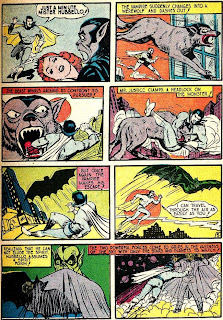 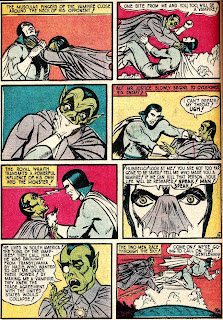 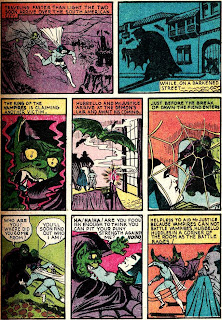 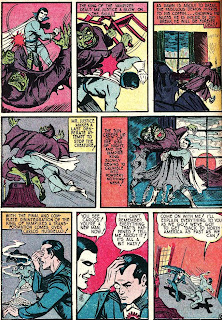 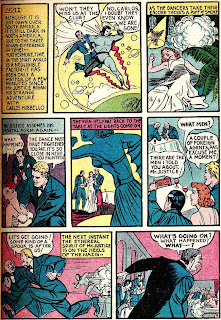 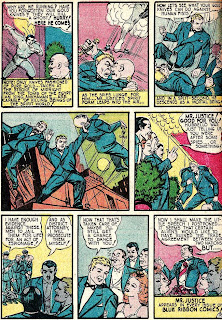 Geez, that vampire reminds me of my managing editor!

There is one other example of vampires turning into werewolves that I know of, an early Batman two-parter from Detective Comics #32 & 33 written by Gardner Fox where Batman fights someone called the Monk who does just that. Bats doesn't fight him in outer space or get mixed up with any trade agreements but he does get a trip to Paris out of the deal.

Hey, Jerome...I remember the Batman story but didn't remember the vampires to werewolves part. I thought the two were separate species (and yes, I realize we are talking about fictional creatures), but maybe back in 1939 or '40 people had them blended together in their minds.

Wait, there can be only one wolpire.

Never mind the vampires / werewolves thing. I want to talk about the part where it's dawn in South America, but still night in North America, because of the three hour time difference from north to south, and the fact that if this is true, then it must be 3 in the morning at the banquet.

What a fun/nutty story! Great artwork throughout. This is the first Mr. Justice story I've ever read... so is he a Spectre-kinda supernatural character? Does he not have a secret identity?
I know I sound like an addled 11 year-old, but I didn't get clarity on either issue in the story, fab though it is!

Frank, this link could help answer your questions.

Thanks, Pappy...I just found a run of BLUE RIBBON on-line, and have seen Mr. Justice's origin with mine own eyes...all my questions were answered!

This is a pretty cool series...I'm glad you introduced me to it!