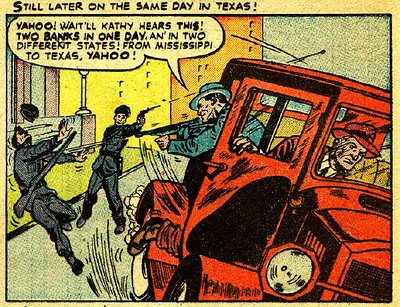 
In the 1940s when crime comic books appeared in the form of Crime Does Not Pay, reading about gangsters and criminals was nothing new. Stories about lawbreakers go back as far as the beginnings of human society. What was new was putting them into a form accessible to children. Parental groups opposed to crime comics and even comics in general were around then, but got their public voice with Dr. Fredric Wertham, M.D., who got some steam up in his personal war on comics about the time this story was published, in Crime Does Not Pay #65, July 1948.

This is a story that ol' Doc Wertham would have loved to hate! George "Machine Gun" Kelly" and his wife Kathryn had already entered into legendary status after their crimes and arrest. They were still alive and in prison 15 years later when this story was published. 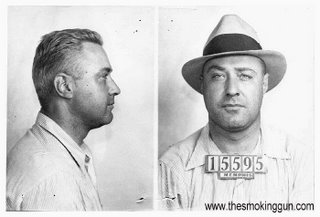 I don't know who wrote or drew the story. It's a cut above average, even for Crime Does Not Pay. Stories in that magazine were generally well drawn and written (even wordy for comic books). Nobody took credit. You sharp-eyed art spotters out there might be able to identify the artist.

The story might have been edited down to fit, but was for sure edited as to the name of the Kelly's kidnap victim, Charles Urschel, who comes out in this story as "Cashel." Even the pseudonym was edited from its original "Caschel," (probably considered too close to the real name). Whoever did the corrections missed a couple of speech balloons with the original spelling. Editing extended to the real-life arrest of the Kelly's, which was made while both were in bed, sleeping off a night of drinking. In the comic book version they are both standing up and dressed, a nod to the propriety of the times. Even though they were married, they couldn't be shown sleeping together. They could be shown shooting cops and flaunting the law for 7 ½ pages, but not in bed together.

(By contrast, "the Collins boys," on page two, could be shown in bed together.)

Kelly was reputed to have introduced the term "G-Men" into the language by yelling out, "Don't shoot, G-Men!" when he was arrested. I'm surprised the comic book story didn't include that.

Kathryn Kelly, who came from a criminal family, is shown as a bad woman, and you can tell she's bad because in every panel she's dressed in red. That was shorthand in those days. If you wanted to show a woman as a prostitute or gun moll just dress her in red, and voila, she's a scarlet woman. The panel of Kathryn with the cigarette hanging out of her mouth Wertham might have called an "image of comic book womanhood." The image of women didn't fare too well in crime comics. 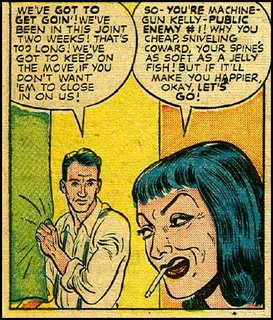 Kathryn Kelly was to George Kelly what Karl Rove is to George Bush. She deliberately and carefully created his public image. In the Kelly case, Kathryn may be the first PR flack for a notorious criminal. 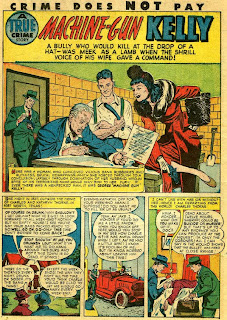 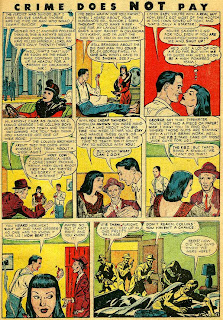 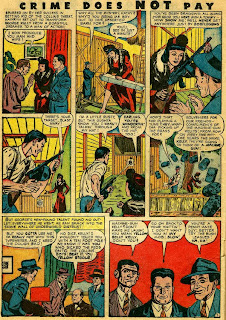 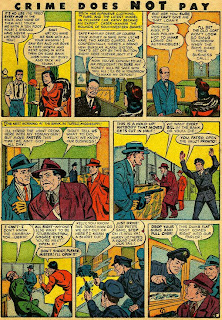 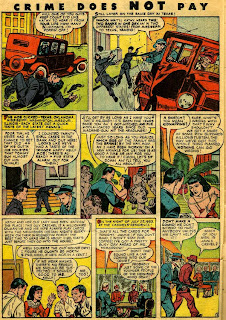 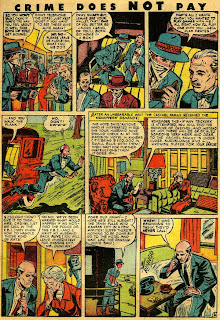 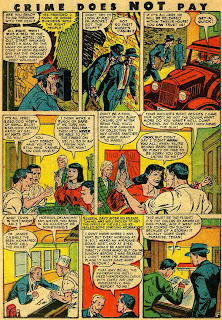 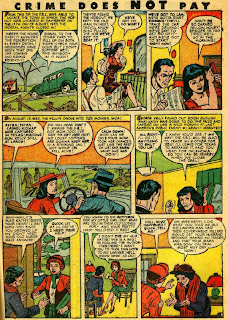 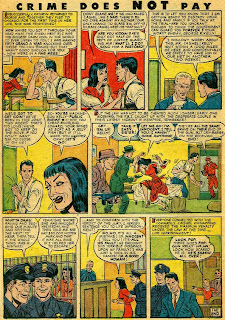 Email ThisBlogThis!Share to TwitterShare to FacebookShare to Pinterest
Labels: Crime Does Not Pay, Machine Gun Kelly