Number 2580: The writer is out of ideas at Out of the Night 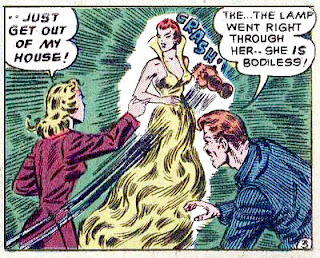 American Comics Group editor, Richard E. Hughes, was inserted into stories a few times over the years in ACG’s supernatural comics, as they were referred to in house. This pre-Code story, “Adventure into Witchcraft,” has some panels of Hughes listening to a writer’s problem of not being able to write a good story. The ACG way in a story with a writer and an editor was having the writer encounter the type of situation for real to give his fiction some credibility. To the fictitious depiction of Hughes, that is.

Harry Lazarus was an artist who worked for ACG, both pre-Comics Code and post-Comics Code. He was a solid professional artist, which to me showed he could tell a story. He worked for several other publishers, also.

The story is from Out of the Night, a comic book ACG added to its list of supernaturals. ACG titles were apparently doing well in those days. I like the panels with Hughes at his desk with his door advertising not only Out of the Night, but Adventures Into the Unknown and Forbidden Worlds. Out of the Night ended in late 1954 after 17 issues. 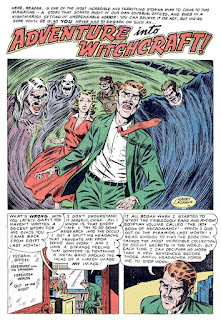 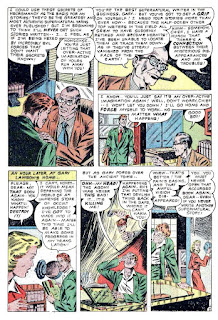 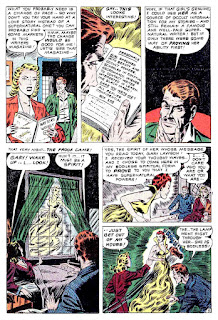 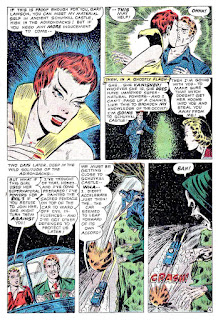 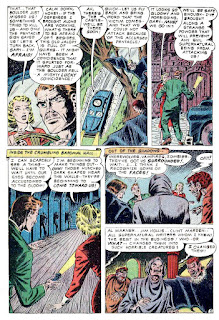 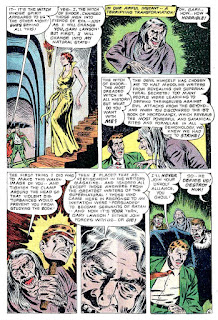 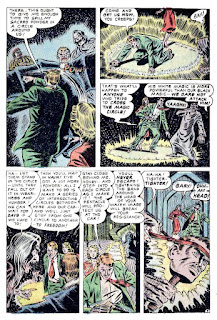 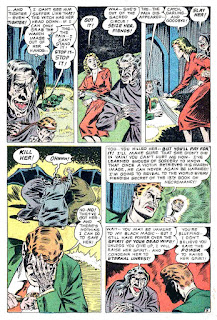 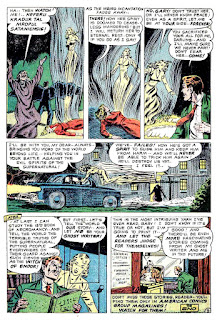 Email ThisBlogThis!Share to TwitterShare to FacebookShare to Pinterest
Labels: ACG, Harry Lazarus, Out Of The Night, Richard E. Hughes

These days, many readers will not know that the Witch of Endor made her earliest recorded appearance in the Old Testament (specifically in Chapter 28 of The First Book of Samuel), and thereïn summoned the spirit of the prophet Samuel (thereby creating some major problems for later Christian theologians). The idea that Gary would be well-versed in the occult, and accept that he were dealing with the Witch of Endor, yet not believe that she could summon the spirit of his late wife is implausible within what should be the internal logic of the story, even in the context of how flakey the remainder of that logic is.

One bit of silliness seems to follow another. Except in its broad outlines, the story is utterly ad hoc.

For what it's worth, normally a pentacle contains a pentagram, but that's not always the case, and the word “pentacle” may not even be derived from the Greek “πεντ-”. Lazarus's pentacle is odd, but still technically a pentacle.

Daniel, thanks, as always, for your knowledge of a variety of subjects. I actually went to Sunday School as a youngster, but my Biblical knowledge is about where most things I learned in my early years have disappeared by. As my doctor put it, "your brain, like a hard drive, sometimes gets too full." Eh? If my hard drive hadn't junked my brain long ago, maybe I could remember where I put my eyeglasses.