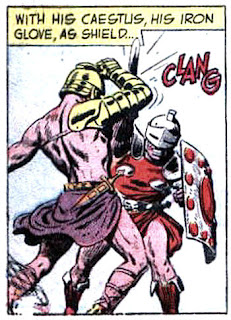 The Brave and the Bold was a comic book created as a wholesome entertainment for young readers, those who were now buying censored Comics Code-approved comics, that is. The idea was simple: create three feature characters for the title, make them historical. Even the Comics Code would pass a bit of historical mayhem. Golden Gladiator was one of the characters, along with Viking Prince and the Silent Knight. Of the three Golden Gladiator must not have attracted much attention, despite some excellent (as usual) dynamic artwork by Russ Heath. The Brave and the Bold #6 was the last appearance of the Golden Gladiator.

In this story from The Brave and the Bold #2 (1955), we are told that Golden Gladiator is good in the ring. We don't get to see the bodies piled up as entertainment, but we get the gist of it. Golden Gladiator’s girlfriend, Lucia, cheers for him, while her uncle, “Wily Cinna,” hates Marcus (the Gladiator’s real name).

I wondered if Attila the Hun and his hordes were around during the heyday of the Romans, and then read this online: “Attila the Hun was one of the most fearsome enemies that Romans ever faced.” For me, that is a history lesson in one simple sentence. What got my attention in the story was that Attila took on the Gladiator by himself, while surrounded by his own army, then kept banging with his sword an iron bracelet on the Gladiator’s wrist, which must have been given to Golden Gladiator by an ancestor of Wonder Woman. 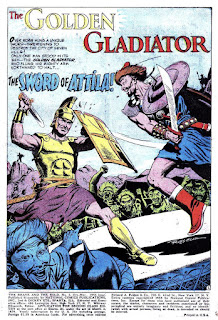 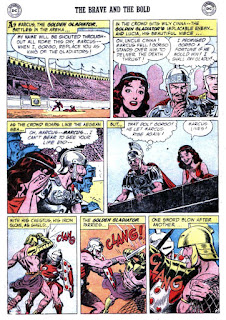 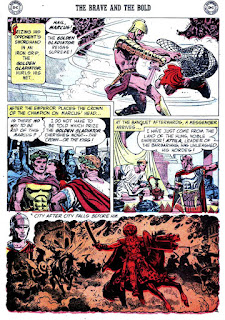 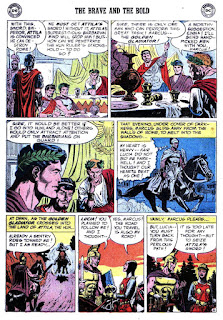 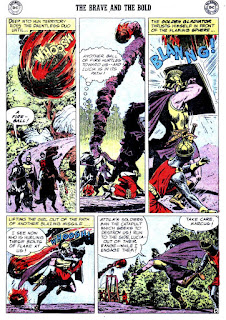 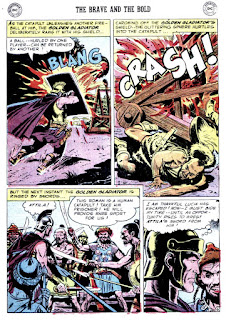 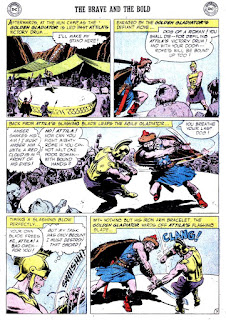 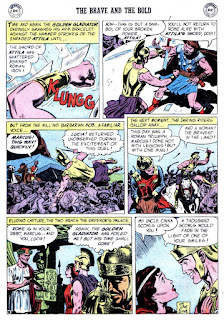 Capture Atilla's sword and the invasion of the barbarian hordes is over. Ah if it were only that simple.

I guess that Heath had essentially caught his stride by the time that he illustrated this story, though he later did more polished work. In this case, the lettering and coloring (by others) scream “DC”, though Heath was doing eight-page stories for Atlas at the same time.

I cannot much believe that the Huns could not hit Marcus or Lucia with either a spear or an arrow, and could not outrace armored people on horseback. Of course, before that, there's a catapult that is swiftly reloaded and re-aimed, and the whole bizarre business of Huns superstitiously quitting because of loss of a sword.

Various plausible stories are told of the death of Attila. The most interesting that I have encountered is that he was wed to an unwilling bride, got drunk during a wedding feast, and slammed his face into a pole in the tent in which his new wife was waiting, then fell on his back and drown in his own blood, as the woman watched without summoning help. (I wouldn't blame her.)

I always love how Russ Heath drew women. There's an absurd horror comic by heath ... 'One Way Ticket, where this beautiful Russ Heath woman is completely dedicated to her husband but it makes him disgusted for some reason. He ends up killing her because she's too subservient. It seems like it was written for little boys that hate girls. It's a silly story but it's maybe my favourite of his.