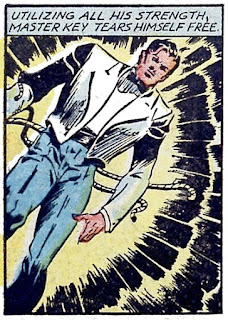 Master Key, a creation of the Harry “A” Chesler publishing company, doesn’t wear a costume. He sticks to his dapper civilian wardrobe. Master Key, also known as Ray Cardell, was zapped through a telescope by some oddball ray, and it gave him the power of x-ray vision and also the power to zap people with that ray. Ray and his ray, you might say.

This episode, from Scoop Comics #2 (1942) has the usual set of spies trying to do in the hero. They make the mistake many villains make. They create a deathtrap. When exactly, in movies or serials or pulps or comic books does a deathtrap work? Never, I think.

No credits from the Grand Comics Database for an artist or writer. 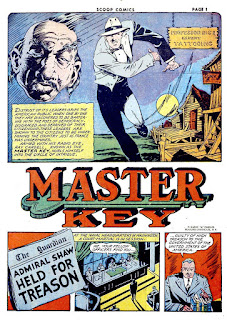 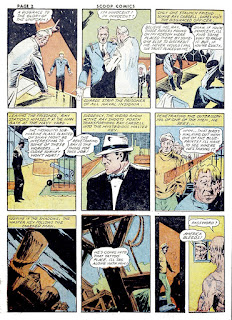 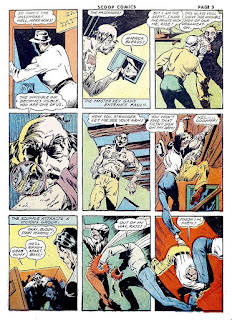 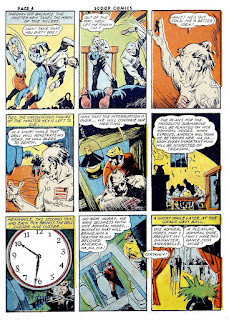 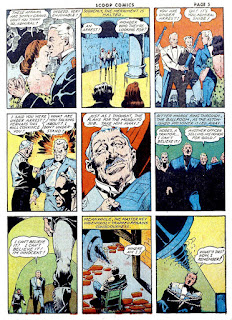 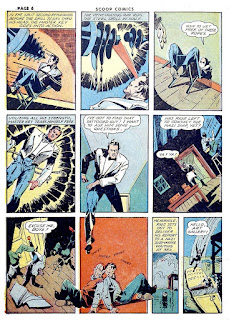 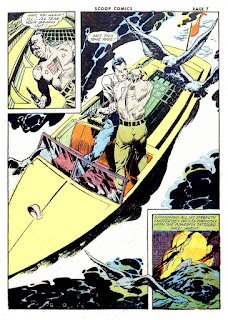 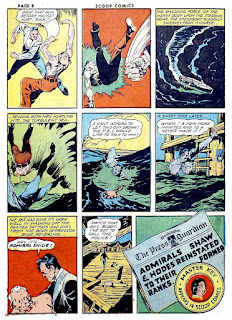 “No, Mr Cardell; I expect you to die.” Yeah, I especially don't get the appeal of a killing process that is slow-moving but expected to be observed by no one — in this case not even by the victim. And, excepting for purposed of cheesy drama, I wouldn't know why Cardell didn't destroy the drill before it would have reached him, and bothered to destroy it after he was out of its path.

Looking at the deltoid of Rige/Snide in 4:3, I thought “There are pictures within pictures for those who know where to look.”

It's a shame that the artist hasn't been identified. Except for a bit here-and-there that's off (such as the shape of the drill), mostly the illustrations are quite appealing.

I'm pretty sure that having a giant drill bore through a person's head would cause death a lot quicker than merely bleeding to death.

Pretty generic story for the times, but love the art!

I'll bet the art is by Charles Sultan, who was able to do a very credible imitation of Lou Fine.

Daniel, ybcguy thinks the art is by Charles Sultan, and I would add that I think it is Sultan with other artists in the Chesler shop.

Touché on that deltoid shot. Based on some anecdotes by Harry Harrison when he was working with Wood, sometimes an artist might salt a panel with something outrageous, sexy or even pornographic. When the art director got off the floor from a heart attack or shock the artist would remove the offending artwork. All in good fun! This one might have just slipped by the editor, just as it slipped by me.

ybcguy, as I told Daniel, I think you have the right artist in Charles Sultan, but I also see other hands in the story. Sultan was an interesting person, very talented, and here is an interesting biography of Sultan by David Saunders.