Number 2385: “This will shake the sauerkraut out of your teeth!” 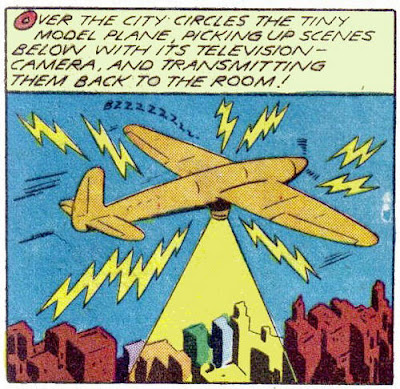 I’m not an expert on Captain Midnight, but I like some of the Fawcett comics I’ve read. This story caught my eye because it has a familiar concept. It is about a miniature drone, or radio controlled plane, the flying eye, as they call it, with television camera in it to keep tabs on the enemy. Yes, there was television in 1943, but it was still in development. and as I understand it, that development was shelved during the war at the request of the U.S. government. So Captain Midnight, who built the small robot plane, must have been doing the work on TV himself. The story is also about a group of Nazis led by Herr Hacker. “Hacker”? hmmm, a word known to us 21st century folks, but in this story Herr Hacker actually does hack...with his sword.

The Grand Comics Database has no guesses on either a writer or artist, but I think the artwork was done by the Jack Binder comic art shop; the lettering gives it away to me. 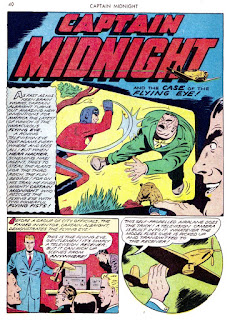 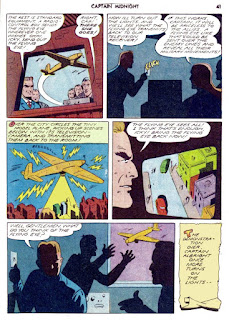 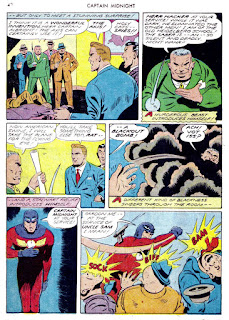 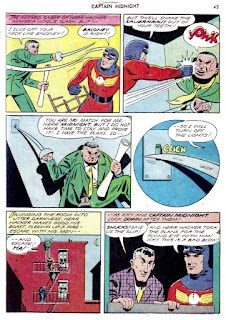 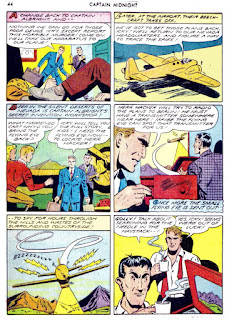 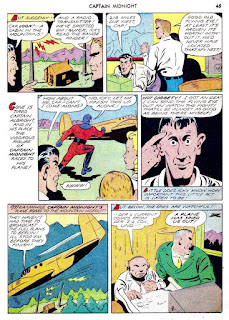 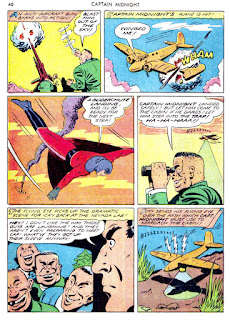 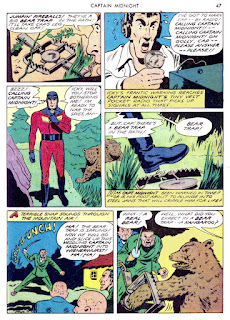 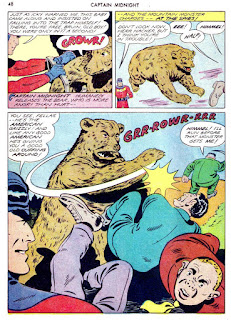 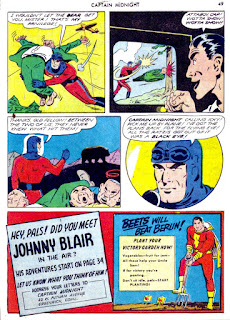 Were it not for the homicides early in the story, I'd see this story as childlike. Actually, the episodes of Captain Midnight to which I've listened were plainly targetting a relatively young audience.

It seems that Albright either invented bipolar transistors or microvacuum tubes; otherwise it would be impossible to pack so much transmission and reception capability into such a small space. Meanwhile, radio-transmission of facsimile images was a decades-old technology by 1942, but these Nazis were describing the blueprints verbally.

The Wright brothers imagined that aircraft would put an effect end to war, by allowing observation of military preparations. Of course, we see that the actual effects were rather different, because planes could and were used for purposes other than observation. The same would of course be true of remotely controlled planes. Captain Albright has tasked his remotely controlled plane as an observation device, but such a plane could be used instead to deliver bullets or bombs.

Daniel, I understand that the CIA was working on drone technology in the fifties at least. They used high altitude spy planes until they could get satellites in orbit and the modern drones are used as much for psychological purposes as for blowing people up. Death by long distance has been a science fiction dream for many years but an article in the New Yorker told of Afghan villagers living in terror because they knew that there were (or could be) drones flying high above them, ready to launch bombs. Not only can they bring death, but drones can cause mental health crises.

Here is a very early drone-like flying craft shown in the January 9, 1956 issue of Life magazine.