Number 2051: “Let your conscience be your guide” 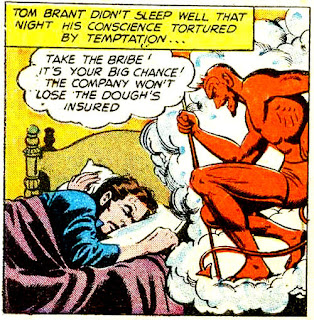 “The Bribe” is a beautifully drawn story that involves conscience and moral responsibility for the chain of events set in motion when a guy doesn’t do what is right. It illustrates my favorite law, the Law of Unintended Consequences. Sometimes actions go wildly out of control very fast. Tom Brant is the poor shlub in the story. He is seduced by a blonde and bribed to give up the combination to the boss’s safe. He knows he is doing the wrong thing, but does it anyway, and then has to live with the consequences. Religion and the concept of sin aren’t mentioned, but implied by the portraits of Satanic figures.

Morals were big in crime comics of the forties, but mainly along the lines of if a guy does the crime, he will go to the electric chair. A “scared straight” approach. (And, the publishers thought, a way of mitigating criticism of the genre.) This story, artist identified by Grand Comics Database as being Dan Barry,* and published in DC Comics’ Gang Busters #6 (1948), appeals to the conscience, unusual for a crime comic. 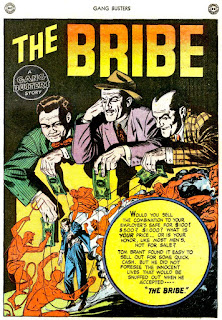 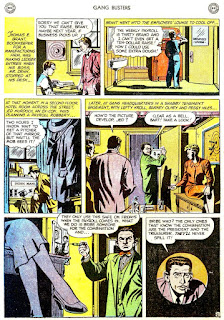 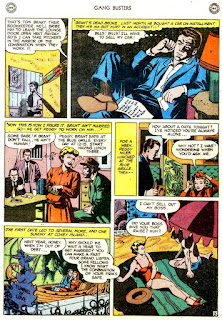 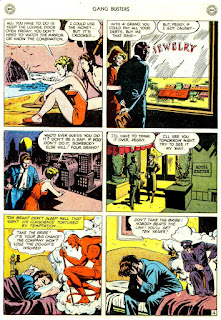 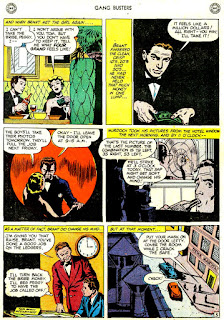 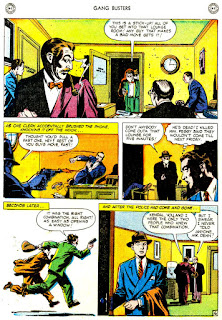 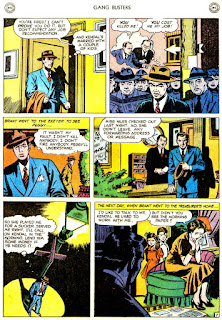 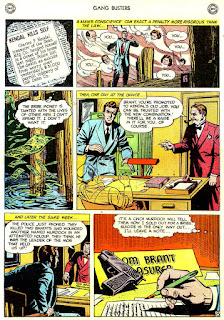 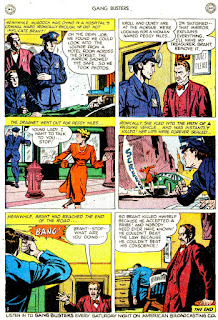 *UPDATE: As shown in the comments section below, longtime comic art expert, Alberto Becattini, identifies the art is being by Emil Gershwin.
Posted by Pappy at 12:01 AM

Thanks! I think I'll share this with some of the boys in my Trail Life patrol.

This is a little less justice and a little more evil, vindictive god! Everybody just gets slaughtered here! Was this really a Spectre story and the Spectre was invisible?

My favorite part -- normally we'd have and angel and a devil, but here we get a devil and a cop! Somebody is trying to tell us something!

Mike, something I liked about the early Gang Busters, especially with the Dan Barry art...terrific splash panels.

Brian, I'm sure your mom told you a policeman is your friend. I used to think that, too, until I got my first traffic ticket. No really, I don't have anything against the police, and I want them to protect me in case of an emergency...but I don't want to meet them in any other official capacity, especially with ticket book in hand.

Justin, at last! A crime story used for good!

I'd never seen this story before and I can tell there's some Dan Barry here and there, but most of it looks by Emil Gershwin.

About Dan Barry - - my book about him has just been published here in Italy. It is an extended version of the essay that appeared in Alter Ego a couple years ago.

Thanks for your update, Alberto. I will edit my text to reflect your artist identification.