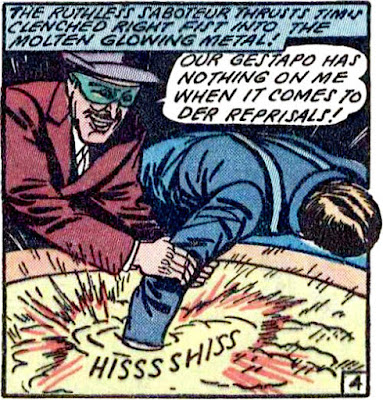 Steel Fist was another short-lived superhero, with five appearances in Blue Circle Comics. This is the origin story from issue #1 (1944). Blue Circle was one of those comic books that (at least to me) looked cobbled together with left-over material from somewhere. Those were the days of paper rationing, and anyone with a ration could get into the publishing business. Comic books were great sellers during World War II, often selling out their press runs.

Characters didn’t even have to be original. Steel Fist (Timothy Slade, steelworker) got his hand dipped in molten steel by Nazi saboteurs. That must have been the same magic that a few years earlier allowed Steel Sterling to get his whole body immersed in molten steel and come out invincible. Unlike Steel, Timothy didn’t get any other super powers, but  oh, baby! could he throw a wicked punch!

Henry Carl Kiefer is credited with creating Steel Fist. Kiefer was one of those older artists (born in 1890), who came into the comic book field in the thirties after working as an artist doing illustrations in pulp magazines for several years. H. C. Kiefer was familiar to me from issues of Classics Illustrated. He was also a journeyman who did artwork for many different comic book publishers. He died in 1957. 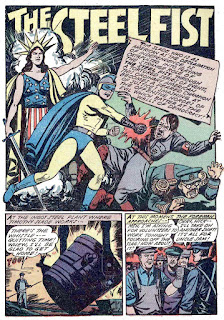 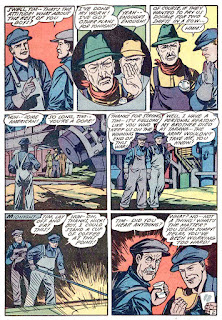 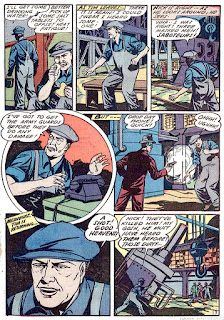 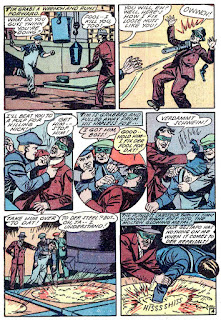 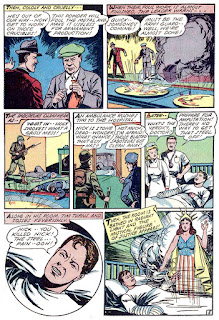 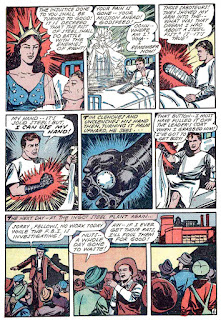 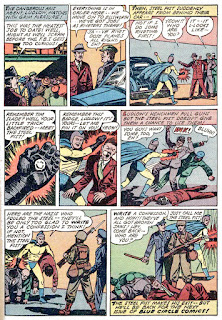 And speaking of Steel Sterling, here is his origin from Zip Comics #1. Just click on the thumbnail. 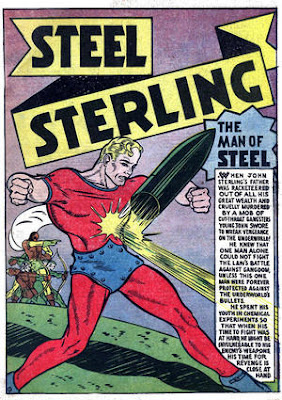 The origin story of Steel Sterling used comic-book science to explain the efficacy of his bath. That for the Steel Fist pretty much openly used magick — and a very nationalistic magick at that.

Even at my most naïve, I would never have imagined Justice to drape herself in the flag of the United States. And — my God! — how could justice of all things be mystical?!? Mystical justice is about as coherent a notion as mystical science.* (“Yeah, we dunno why we're doin' this to these people, but it's justice! How do we know it's justice? I dunno how we know, but we just know! It's kinda mystical!”)

The stories in the comic books of World War II had an awful lot of saboteurs acting on the home front. Perhaps my reading of history has been inadequate, but I've not run across any factual reports of such things; I infer that sabotage was rare. I wonder why J Edgar Hoover, who wanted to be seen as on top of things, didn't basically tell the comic books to knock it off.

The perception fostered by these stories could not have been helpful to German immigrants nor to those whose parents were such. Contrary to myth that has been expedient for the last few decades, German-Americans sometimes suffered wholesale violations of their civil rights by the state, and certainly could face sanctions from the rest of American society.
______________________________

* Mind you that a lot of what is being trumpeted as ostensible science these days is no such thing. At least one celebrity “scientist” claims that science produces objective truth (by which he claims that we ought to be governed). Actual science produces a best approximation of the truth, but that approximation can be expected to need refinement and occasionally to fail grossly.

Despite radically different origin stories, the mere naming similarity makes me wonder if the creator of Iron Fist was inspired by Steel Fist. Anybody know if this was the case or not?

Justin, whenever confronted with a question of whether a newer superhero's name, or even basic inspiration, was from an earlier character, I have no way of knowing. However, there are a finite number of apparent origins and names of superheroes in the superhero universe, and it is possible it is just a coincidence.

How is that for using a lot of words to say "I don't know"?

Well, gee, Daniel...we have a pretty good opinion of our justice system in the U.S. of A., don't we? Even when it doesn't work we console ourselves by saying, "But it's better than anyone else's justice system." Whether it actually is or not.

I am a cynic about jingoism, but it was the way people were taught to think...and still are, I assume.

I am reminded of Joe Simon's quote on the creation of Captain America (paraphrased), that anyone looks good wrapped in a flag. Back to my natural cynicism, when watching people beat the drum of nationalism I always remember the quote attributed to Samuel Johnson, "Patriotism is the last refuge of a scoundrel." Nothing wrong with being patriotic as long as "patriots" don't use it as an excuse to go off on folks they don't consider share their opinion.

As to whether there were lots of saboteurs working inside the U.S. or not, you could liken it to the modern threat of terrorism. There were lots of warnings and attempts to prevent sabotage, so J. Ed would have no reason to tell everyone to cool down. Quite the opposite. The government wanted everyone to be watchful and report suspicious behavior, just as they do today.

Wotta coinkydink... Booksteve also featured the Steel Fist story on his Four Color Shadows blog.
I found it interesting how many Golden Age heroes gained their powers/abilities through accidents that would kill or at least maim actual people.
J. Edgar Hoover was indeed very protective of the FBI's image. The opening narration of the Green Hornet radio series originally proclaimed that the Hornet hunted "public enemies that even the G-men cannot catch!" After a terse letter from Hoover, this was changed to "public enemies that would destroy our America!"

It looks like the second to last page is missing, file BC01-42.jpg

Mad Thinker, thanks for the heads up. I have corrected the omission.

rnigma, well, it has happened a time or two before, that Booksteve and I have published something at the same time. I like to think of it as great minds running in the same direction.

Since I hardly have time enough to take care of my own business, trying to watch someone else's is too difficult, so...shit happens.

I can understand how Hoover might be offended by a line that said, "Public enemies even the G-Men cannot catch!" He wanted to project an image of infallibility, and for the most part his self-promotion and propaganda worked, leading my younger self to believe him.